A place for us to show off our cars in all their glory. Please keep picture sizes to about 800x600 pixels.
Messages: 50

A couple of pictures of my Van on last year's trip to Åland. > 800 000 km on the clock and still going strong!

Are the pictures too large? I tried to make them as small as possible without sacrificing too much image quality. 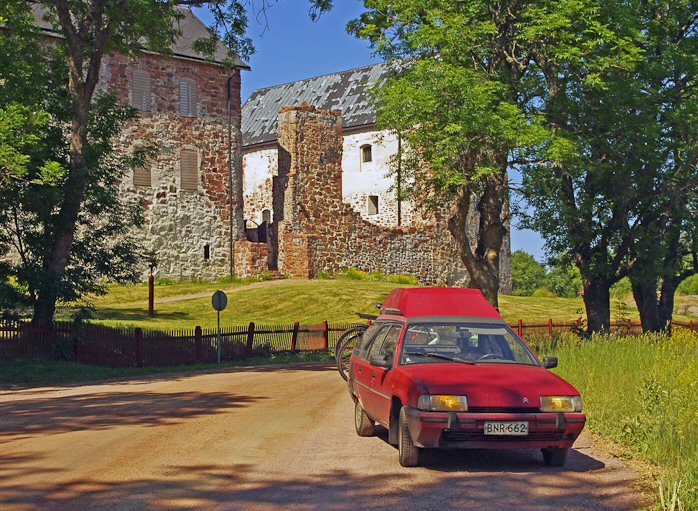 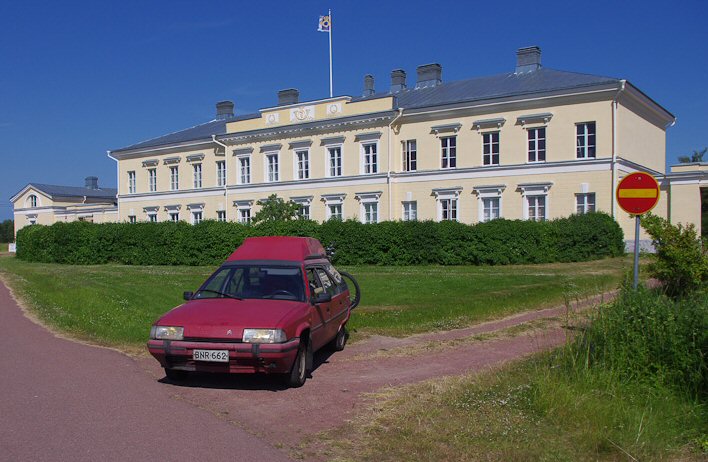 Roverman wrote:Plenty of space in that one, is it a converted ambulance?

No, it's a specifically tailored model to take advantage of certain paragraphs of the Finnish automobile tax system. Do a Google image search for "bx van" to see lots of those.

Finland has since 1950's had a very high tax on cars (I think it was 127 % in the 80's and 90's, now the system has been changed somewhat). At different times and ages, there have been several loopholes in the law that have allowed automobiles to be classified into a lower-tax rate class. One typical exemption from the ridiculous taxing has been vans, which are supposedly used by professionals to transport goods from one place to another. The rules for classification have changed several times, and it is a continuous play of cat and mouse between the tax authorities and innovative car owners/importers. In the 80's (up until 1991) a car could be classified as a van and sold at half price compared to a regular car, if it had only one row of seats, minimum boot height of 135 cm (IIRC) and minimum boot volume of 2m3.

So by getting rid of the back seat, cutting a hole in the original roof and then installing this specially tailored fiberglass thing on top of the car, the resulting BX Vans were sold at about half price compared to a regular sedan/estate. The modifications were made in Finland by a special company, and all BX Vans were initially red or white.

Furthermore, in addition to the exemption from the 127 % automobile tax, cars officially classified as vans pay only 1/6th of the annual so-called "diesel tax", based on car gross weight and collected in order to compensate for the lower tax on diesel fuel. So I for example pay only 50 euro (=40 pounds) of diesel tax per year, whereas the tax rate for a similar sedan/estate would be around 250-300 euro.

So this peculiar-looking BX is actually a specially tailored model designed to evade certain taxes invented by the Finnish authorities. No need for such cat-and mouse play in UK, I guess?

rmattila wrote:I must warn you that they are really tools and certainly no showpieces.

No problem! In fact I prefer looking at 'working' vehicles rather than pristine concours ones - they have a patina and character that tells a story...

Blimey. So a Finnish BX starts like as a hatchback, gets converted by Heuliez into an estate, then converted again into a high-roof tax evader!

These are not the 'BX Van' we normally see, They usually have a low roof and panels in the side instead of windows. I'm sure our resident (proper) Van owner will be able to furnish us with pictures shortly?

That's currently the only photo I have of my entire fleet - taken in bad weather with a cell phone through a stained lense.. 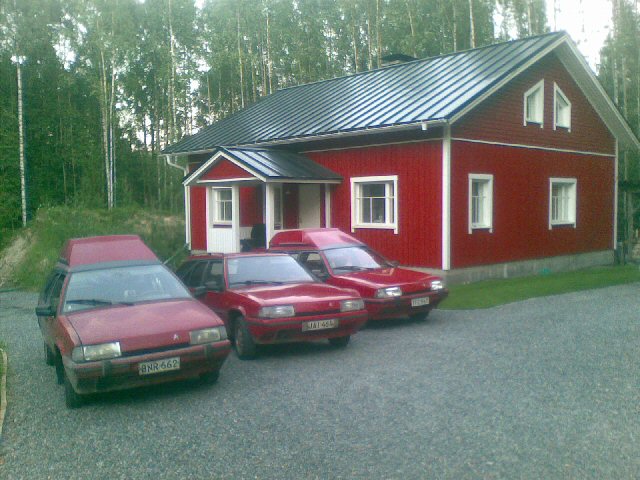 The closest one is my everyday Chosen Van, the one in the middle is the Wife's Break, and the furthest one is a spare Van (so far with petrol engine) that is used when either of the diesels is undergoing repairs/maintenance.

The Break in the middle was imported with a petrol engine, and as a "regular car", i.e. the astronomical automobile tax included in the price. It was converted to diesel in 2005, and in order to keep the diesel tax reasonable, it was re-classified as a van. There still existed a loophole in 2005 to make such a conversion by simply removing the back seat and replacing it with a plywood bench with maximum 3 cm padding. This loophole was closed in 2007, so it's no more possible to make such 5 seat "tax vans". The old ones were luckily allowed to keep their status and the back "seat".
Speechless quad lying flat on his bed, communicating by moving eyes.
BX Van 1.9D -90 Gone.
BX Van 16S -90 For sale.
BX Van 1.9D -90 (Earned!) Gone.
BX Break 1.9D -90 (officially a "5 seat van" since 2005) Waiting to be towed to a new home.
Top

What are the panels on the roof of your house?
Top

scarecrow wrote:What are the panels on the roof of your house?

Blimey - does that work out cheaper than stone/ceramic options, in the long term too?

I like the feeling of snugness when I can hear the raindrops on the roof...
Top

I love your house, it just looks fantastic & so continental

Also want one of those vans, they are so unique, are they expensive to buy now?

Had a look at your piccies, i've always wanted to go on some holidays in Scandinavia, it always looks so clean which reminds me of Switzerland in some ways. Perhaps i'll get over that way in a BX

What a nice old tractor 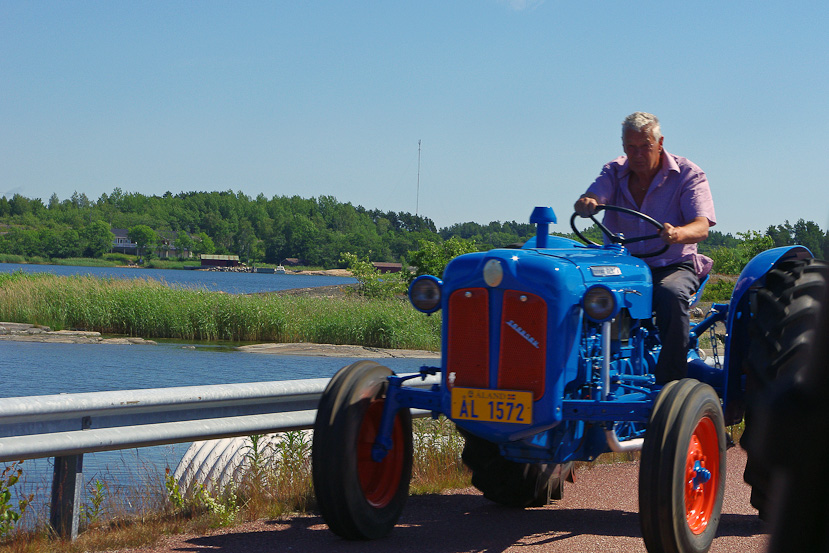 Thanks for the nice words about the house. It's been a real DIY project: 9 years and counting (plus two years before that to design it), and not even close to finished yet. So far no hired hands needed in designing/building work, but with this approach it tends to take time to get things first learnt, then done and finally finished. (Not even thought about a garage yet, so outdoor repair work will continue for a few more years to come..)

BX Vans are not expensive - a few hundred pounds at most, depending on the condition, but we're currently seeing them disappear really fast from everyday traffic. You can actually get a van failed by MOT for free, but it's not so easy to find a place to store the carcasses, and it is very painful to know that good spare parts are being wasted as scrap metal, since there is not enough time to go and salvage parts from every BX that's going to the baler's.
Speechless quad lying flat on his bed, communicating by moving eyes.
BX Van 1.9D -90 Gone.
BX Van 16S -90 For sale.
BX Van 1.9D -90 (Earned!) Gone.
BX Break 1.9D -90 (officially a "5 seat van" since 2005) Waiting to be towed to a new home.
Top

Ooooh - sorry, I hope you don't mind me posting one of your photos - bit of a cheek now I think about it

scarecrow wrote:Ooooh - sorry, I hope you don't mind me posting one of your photos

Nah, that's all right. (And that Fordson driven by the unknown gentleman sure is in a nicer condition than my own machines..