A place for us to show off our cars in all their glory. Please keep picture sizes to about 800x600 pixels.
Messages: 82

Hello and welcome to the "Oh my God what a bargain!" car! 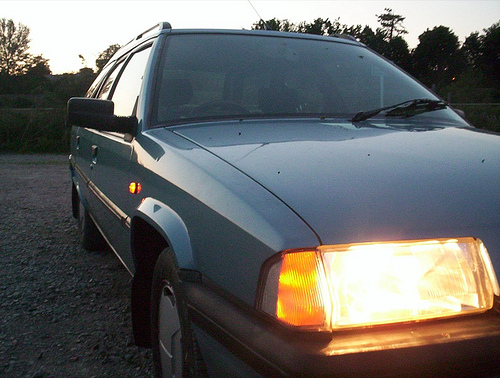 Upon inspection it seemed to be exactly what the seller described: a very well-maintained car in excellent condition with a fairly severe hydraulic leak. I enticed The Mighty Rutherford down with an offer of food and beer, pushed him under it and he set about patching up the leak which turned out to be nothing more severe than a crumbly octopus. 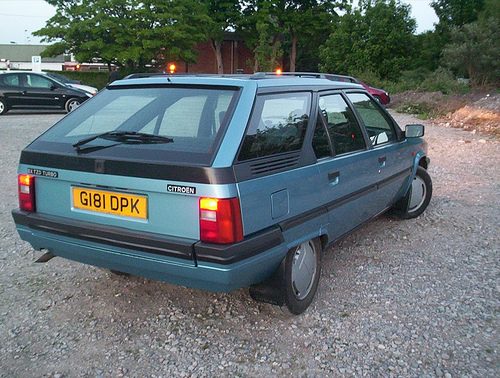 Patched but imperfectly, we set off in convoy with the seller looking like he really wished he'd asked for more money and needing only one stop to top up. When I realised that the leak was fairly constant regardless of speed I decided to just get home as fast as possible, planted my boot, and discovered just how capable the TD engine is. That is without a doubt the fastest BX I've owned and, being a torquey diesel, has all the urge exactly where you want it. I can't wait to punt this car up a known A-road and find out how well it can overtake! 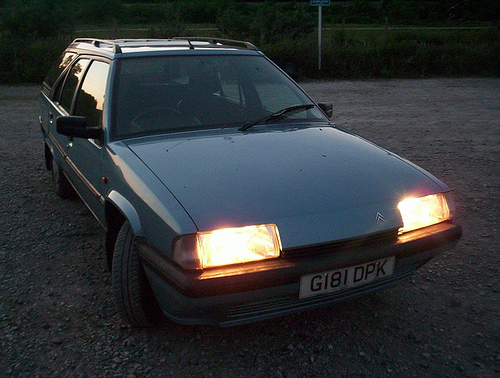 Of course I was spraying LHM over the place. David, has your windscreen cleared yet?

On reaching my home, we bought some hose from the local motor factor and David dived under the car again and made it properly LHM-tight. Great work. It will be receiving a new octopus soon but in the meantime I have a fully functioning car (until the octopus springs another leak) for a very reasonable sum of money. 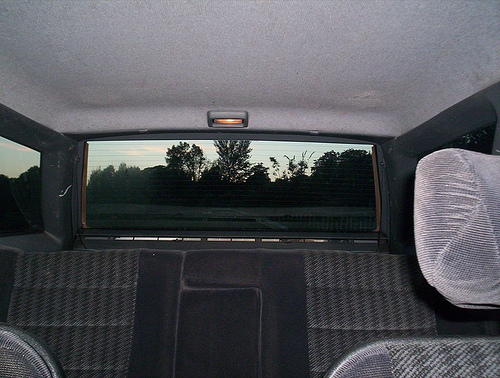 This car makes so much more sense than the hatch - the amount of space in there is astonishing. David and I could each sit in the back comfortably, even with the front seat pushed all the way back, and the extra headroom in the front is nice too - I even drove it today in my cowboy hat.

Good choice of car there Stuart, mind you I am slightly biased owning own myself! Certainly looks very clean too, how are the A pillars and rear door shuts?
Last edited by mat_fenwick on Mon May 19, 2008 11:29 pm, edited 1 time in total.
Top

Really very good indeed! There is a little rust starting in the rear door shuts, but nothing to worry about yet - and nothing compared to other BXs I've seen.

Forgot to say in the original post - many thanks to JKW for posting the original for sale advert, and mnde should be along in a minute with more pictures for this thread!
Top

Yes, that does look very good and ditto with that colour - very fitting for the estate. Must be one of the best Bx colours. Looks as though it's escaped the ignominity of being used as a builders van and seems very straight and shiny.

Look forward to seeing it at The National. Got yourself a right nice

Of course, the bloody bastard thing has broken down already.

Hopefully it's just a perished hose. It has been standing for a while I guess... Are you going to take it to the guy who welded up your broken exhaust hangar? Might as well get the occipus done at the same time to save further embarrassment....

Didn't have time to poke about, but I'm sure it will be something like that.

Plan is to yomp down to Dorset with several gallons of coolant and LHM in the back, where a nine-legged puss will be waiting for me. It'll be fine when I'm moving, it didn't throw up until I stopped!
Top

On the plus side Stu, at least your boss will be witnessing how much you need that raise!

We all know how old Citroens like to throw a hissy fit. It's because you took all those posey pictures and lavished praise on it, obviously.

Surely it would be even worse if he lavished attention on his Rover. Then it wouldn't rise, turbo would sieze, rust would start to bubble on the bonnet and boot...
Top

Luckily you're surrounded by BX nerds ( no insult, I include myself) who will ensure your enthusiasm won't wane - as mine has several times in the face of malfunction and I'm sure everyone who's been involved with BXs has experienced.

mat_fenwick wrote:Surely it would be even worse if he lavished attention on his Rover. Then it wouldn't rise, turbo would sieze, rust would start to bubble on the bonnet and boot...

It turned out not to be too serious at all, in fact, but was awkward enough to take me about an hour and a half to fix. When I finished work I collected the car and drove it to Halfords to get antifreeze, in the hope that it was a fault that would hold water except in town traffic. Unfortunately it did not: when I parked at Halfrauds after about two miles it pissed everywhere.

Oh well, there are worse places to break down than outside a car spares shop so rather than call for a tow I set to work. The hose that had given way was, of course, almost completely inaccessible - the least accessible of the two that plug into the oil filter housing. I lifted out the turbo hose to make access a little easier and set to work.

The top end of the hose is quite easy to reach so I undid the jubilee clip and pulled it off - and the hose came away at the other end too as I did so. Yes, I pulled it clean off, just leaving a stub wrapped around the oil filter housing end: a stub held on by the stupid factory-fit single-use jubilee clip with no way to shift it. I attacked it with various tools for about half an hour, hindered by lack of access, and eventually managed to lever it off with a screwdriver. Lucky the hose was so perished as its disintegration was the only thing that got it off, I swear. I've never seen one so bad and I have no idea how it held water for so long.

After that it was plain sailing, if tight; I bought a long length of hose from Halfords, as the original part has a tight kink in it, and found a way to route it so that it wouldn't kink. I refilled the rad with about 3.5 litres, so I reckon it had chucked an awful lot of fluid out. Makes sense - the leak was at a low point.

Interestingly, the Halfords guy told me I was lucky as they are just using their stock of hose up and won't be getting any more in. Apparently people just don't buy it any more... cars have become disposable and not many people keep them for as long as 18 years any more.

Driving it home I fell in love with it all over again... my first drive in which I was sure I wasn't leaking any vital fluids, so I punted it up the fun route home and had a whale of a time. This is a brilliant car... despite everything!
Top

Ah yes, they are annoying. Second only to the spring clip type of jubilee clip which you shred your knuckles on and always springs tight when you're trying to remove it.

Glad you got it sorted in the end anyway. On the upside, at least it will have some fresh antifreeze in now.
Top

I've pimped my ride! Thanks David, thanks Doc. I went west this weekend for David to sort out my Octopus - which he did with the bits we had to hand, as the correct part seems elusive - give it a service, and make some minor modifications that really do improve the BX experience.

First up, a proper steering wheel. I know a Citroen should have a single-spoke wheel but the BX item is frankly ugly compared to an elegant DS or CX example, and the T-shape item is more comfortable to hold and gives more kneeroom. Thanks Doc for this one (and your farm is a bloody fascinating place to visit - great to see you and sorry we forgot to bring the beer that was intended for you! Next time). 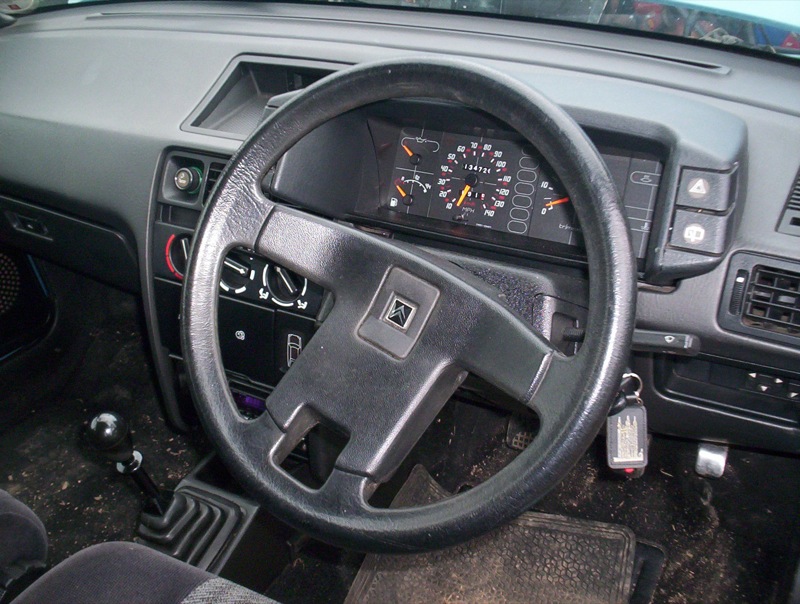 Next up, the crappy BX windscreen system. I like the idea of a spray up the wiper arm, but the BX implementation is rubbish - holes in a bit of washer hose, indeed. Mine was particularly crappy, being a bodged together bit of white washer hose held to the original piping by - get this - the insulation off a bit of mains cable. It looked awful.

If, however, you happen to have a pile of spare Peugeot 405s hanging about the place, the solution is obvious. Any BX that's ever been anywhere near David's house will probably look something like this: 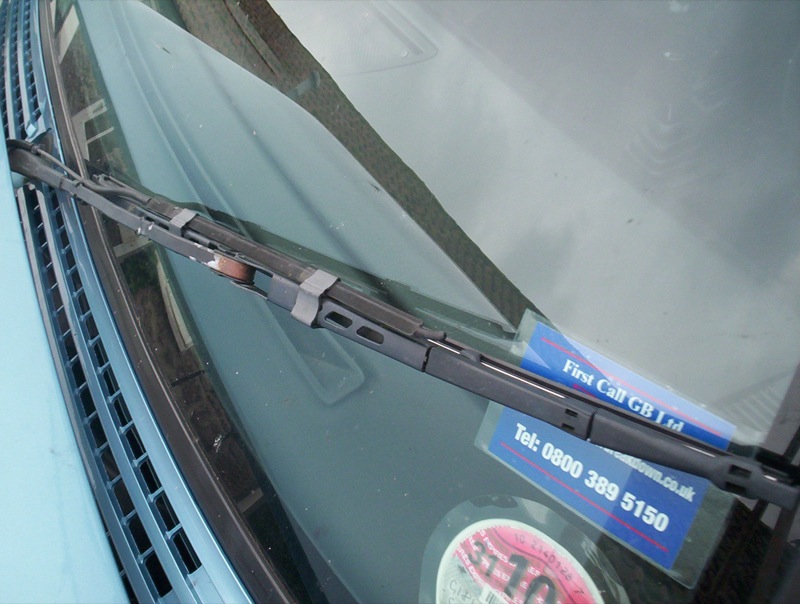 And the piece de resistance - a full set of Speedlines. Oh yes. This idea had been suggested to me and I wasn't going to bother until Pindimar posted pictures of his identical car - so it's all his fault, clearly. 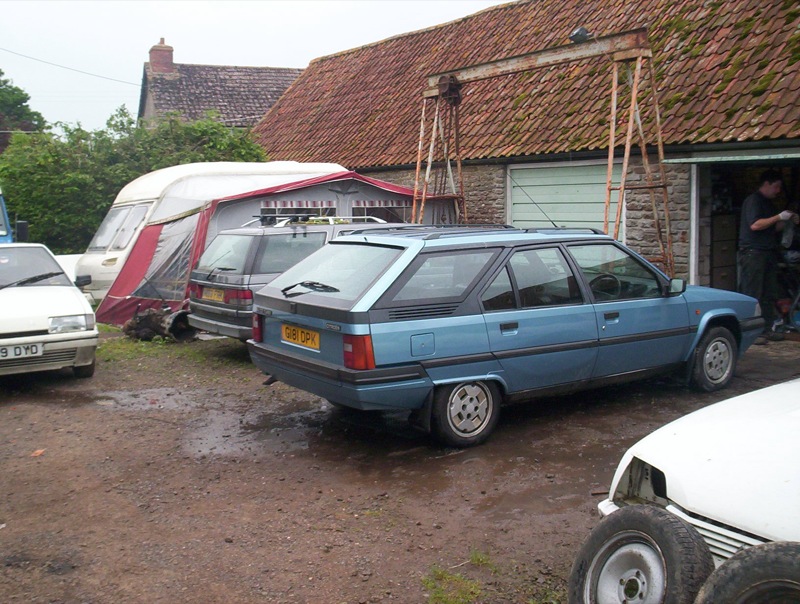 You can accuse a standard BX on 165s of being under-tyred. 185s do the job nicely though