Not sure about 4 fog lamps but each to their own! I miss that car! I was all set to come over for a meet up but someone forgot about me.....

Roverman wrote:Not sure about 4 fog lamps but each to their own! I miss that car! I was all set to come over for a meet up but someone forgot about me.....

The 'meet' was a bit of a rush job in the end. It was supposed to be today but I was suddenly free yesterday evening and George seemed pretty keen to get hold of the wheels and his splitter! Next time there's a BX pow wow in Morrison's car park you'll be the first to know!
Top

Roverman wrote:Not sure about 4 fog lamps but each to their own! I miss that car! I was all set to come over for a meet up but someone forgot about me.....

The 'meet' was a bit of a rush job in the end. It was supposed to be today but I was suddenly free yesterday evening and George seemed pretty keen to get hold of the wheels and his splitter! Next time there's a BX pow wow in Morrison's car park you'll be the first to know!

Park one of my fleet in a "public" carpark?

When I've finished work I sometimes go to the 24hr. Asda to buy cakes at 3am in the morning (!) I find wondering round a deserted supermarket with a couple of 'hoody' skateboard teenagers and assorted 'nightclub refugees' a peculiarly depressing experience. I think it's the crappy T'Pau record ('China in your hands' and so on and so forth) trying to put me in the mood to buy stuff that really clinches the deal; welcome to modern life - s'cuse me while I slit my wrists!

@Tim, (see photos) Yeah, check out all the MPVs in Morrissons crowded car park - 10 minutes before closing time on a Monday evening!

That's still got to beat the heck out of Tesco during daylight hours on any given day, where keeping your lower limbs intact by dodging the zombie-driven trollies is more challenging than driving the Monaco Grand Prix, small children are attempting to scalp themselves on your basket, just about everyone has decided to have a family reunion in the most inconvenient possible place and the old dear at the checkout in front of you stares into space while her stuff is scanned, then realises she has to pay, takes 10 minutes to retrieve her purse from the depths of her handbag, notices she has a voucher for 10 p off if she's spent 40 quid, but has only got £39.78 total so needs to walk round the entire shop again trying to find something to make up the value and BREATHE ...

Supermarkets at night are OK in my book. You can wander round like a zombie yourself without pissing anyone else off and rarely have to queue at the checkout (or can just use one of the self-service ones if it's only a few bits and bobs). They quite often have some stupidly cheap stuff as well

I haven’t had much to report BX wise of late other than: sand wheels, put on more knifing putty, sand wheels, put on more knifing putty etc. etc. The alloys are nearly finished but have seemed like a bit of a Sisyphean task at times. Once I’d got so far with them however, it seemed daft not to keep going until I’d got a really good result. The arrival of some ultra sexy black wheel nut covers spurred me on a bit! (thanks Mark for the heads up on that one 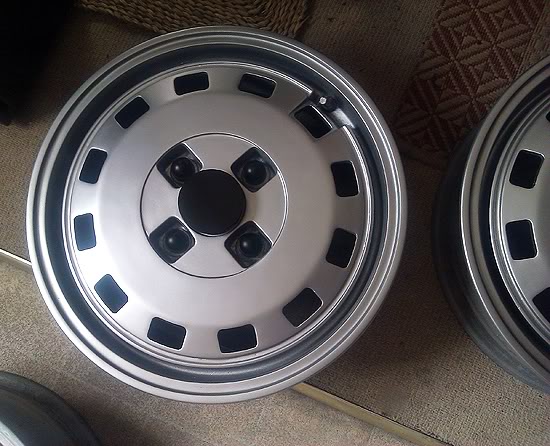 They just need the black work painting in then the lacquer and they're done - thank God!

Both my cars failed their MOT recently – both on knackered flexible steering couplings – now all sorted, but not the easiest part to get hold of I’ve discovered. Luckily, Tim had one for my Hurricane in his fridge (or summat). Thanks Tim!

The driving experience of my TGD has now gone from ‘nice’ to, ‘sheer unbridled luxury’ with the addition of illuminated window switches courtesy of Professor Gadget (aka Mat Fenwick) Thanks Mat! 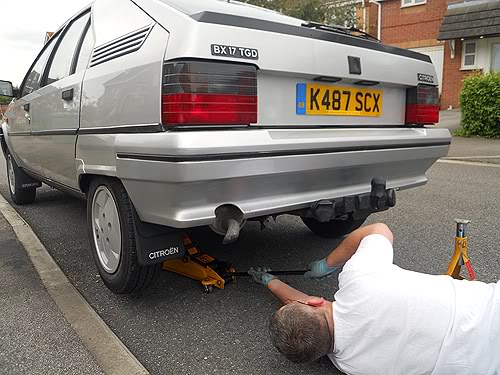 This weekend was definitely given over to BXing though. I went over to Matthews to carry on sorting the rust/scruffy stuff on his TXD while he had a look at the brakes on my TGD. He also very kindly de-scabbed the rusty inner skin of my bonnet with his new angle grinder. It was a bit disconcerting rubbing down Mats car with the sound of an angle grinder raging near my car in the background. Mats description of it as ‘this bad boy’, didn’t really serve to allay my anxiety – he’s done a nice job though!

I’d had a go at the door shuts on his TXD previously and they looked pretty good when I’d finished, but I’d neglected to clean out and waxoyl all the wheel arches to prevent the rust coming back through there. Consequently. . . . the rust came back through there! 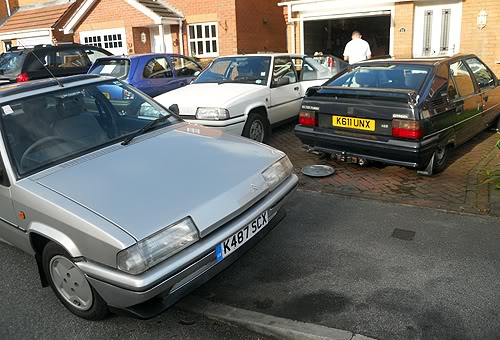 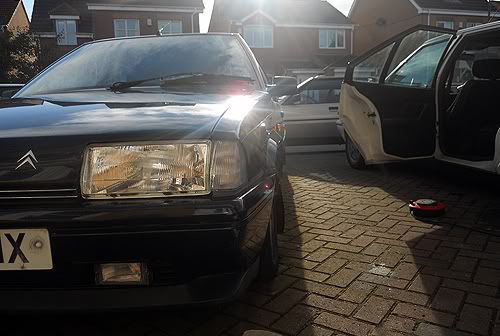 Matthews TZD - which despite having been stood for a while looks really good after a wash and brush up - recommissioning imminent by the looks of it.

On Sunday Sandre popped over (if the journey from Stevenage to Newark can be described as ‘popping’?) as I’ve also agreed – a far as I’m able - to ‘de-scruffy’ her car (it has got a few scruffy bits at the moment it has to be said). The door shut repair I did a few weeks ago has held up very well (this included a thorough cleaning and waxoyling of the rear wheel arch!) and only required lacquering. It just needs a good cut and polish now once the lacquer has cured. 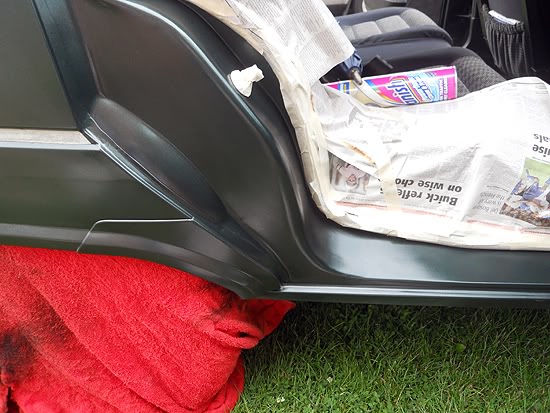 There was also time to clean up the rust on the other door shut, which was worse than the repaired one, but not too bad though. There was a hole about the size of a grain of rice which can safely be filled without too much compromise to the cars structural integrity! 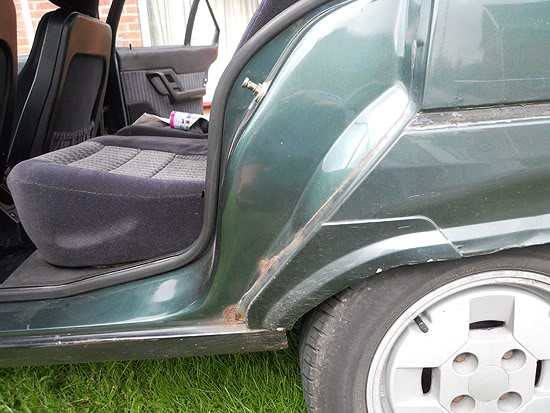 Lastly, Sandre had a look through my prodigious collection of BX literature for the NEC stand while I made sure they were all put back in EXACTLY the right order: limited editions, range brochures Mk1, range brochures Mk2, diesels, miscellaneous trim and price guides, press reports. Thank you and goodnight. Well, you’ve got to keep things organised haven’t you!?

Ooops, think Paul may have made a shiny bit there (thank you again

). Nothing else for it, will have to get the rest of the car done ... Pix I got pretty much duplicate those, except the artist at work: 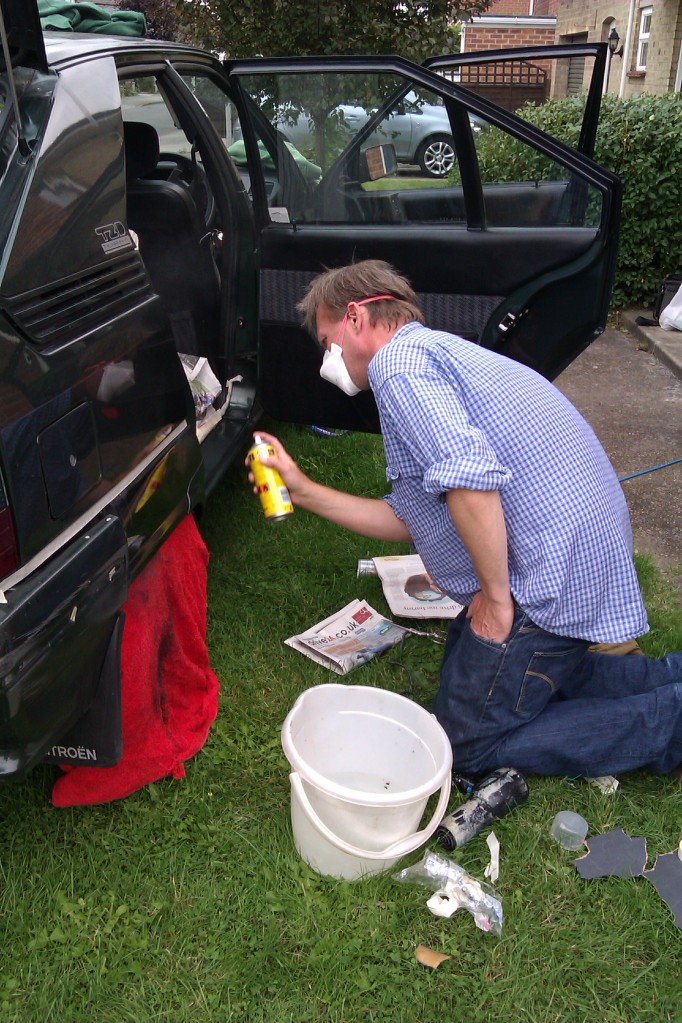 Even if I did get a cup of tea, making me wear this before I was allowed to handle the merchandise* was going A Bit Too Far 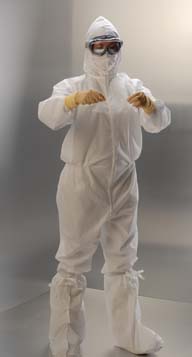 *BX memorabilia as listed on NEC thread, other contributions welcome 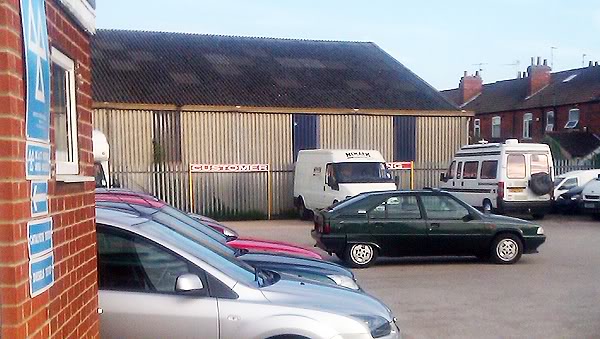 Got there in the end.

Now I can break out my new clay bar without it seeming like a completely futile activity.
Top

That is a very attractive BX Paul! I keep thinking about getting a clay bar, I never seem to get rid of slight cloudyness on the roof of the astra, and i'm sure the GT will benefit from a clay-barring. Is it as simple as it sounds? Just rub the bar on the paintwork with the lube spray stuff?
I'm not a Saint, or a James, but a Tom Saint-James!

saintjamesy89 wrote: Is it as simple as it sounds? Just rub the bar on the paintwork with the lube spray stuff?

I didn't know you could use water - makes things a lot cheaper as you use a lot of detailer.

!WARNING! Anyone that doesn't like car polishing - step away now!

Funny you should ask about clay-barring Tom me old mate, because I managed to have a couple of hours this evening with the aforementioned (so called) car valeting miracle. They are impressive I have to say. It's quite a lengthy process to do it properly, particularly if you polish afterwards - which you're supposed to, and I did - so I only got the bonnet and one side of the car done. I thought my Hurricane was pretty clean, but the clay still managed to pull off an impressive amount of shit and left the paint with a glass like smoothness and lustre which you can't seem to get just by polishing 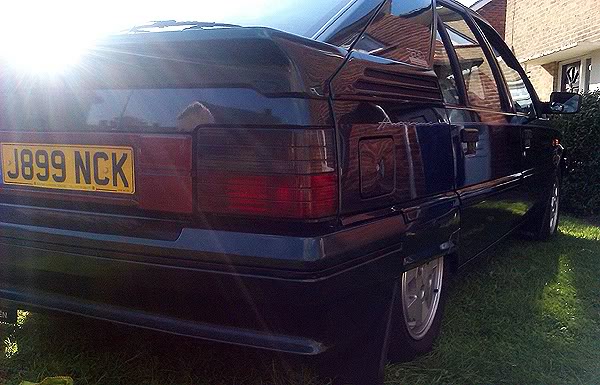 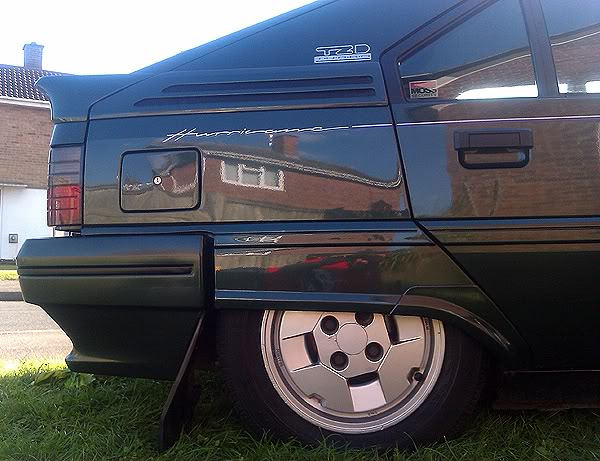 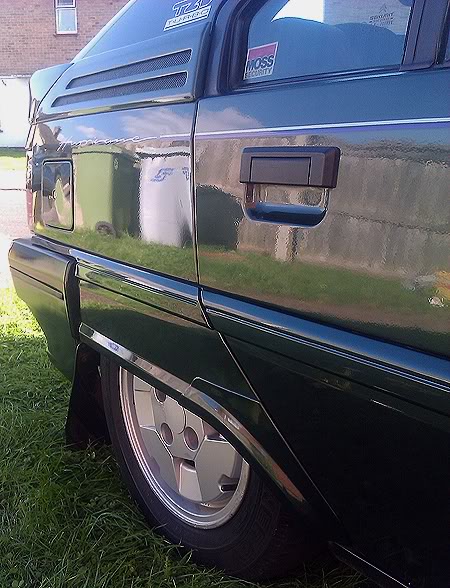 In the kit there's a clay bar and a spray bottle of detailer (that's a lubricant basically) and keeps the clay sliding over the surface. I just did half a panel at a time and there was quite a significant difference between the treated and none treated panels.

Seeing as I'm taking the Hurricane to Aulnay and the TGD has had more than its fair share of attention of late, I thought I'd give the Hurricane a monster mental valet and sort out a few of the other cosmetic/paint issues into the bargain now it has a clean bill of health again. I had all the underneath checked out while it was over at Barry Annell's - that 16v thread of Kitch's really put the wind up me!

WOW. Seems it's an essential part of the armoury if you want to keep one's pride and joy looking good. Shame I don't have a pride and joy at the moment!