Tell us about life with your BX, or indeed life in general!
Messages: 89

My TRS Auto is equally ignored and remains equally just off the radar for full function with much the same issues, with a Weber carb. Off to the dump to get that rare item of automotive part, copper cored HT lead! No one sells it round here. You have to have made up ones, alledgedly. Obligingly remarking 'OK its a BX bla bla' and your met with a blank look from Spotty Watty, or Specky Betty. Not on the list. Right, that will be why I want to make my own set, wouldn't it! It precisely because the nearly new pre-made set were crap that I have a car that did not work very well. What happened to all the really good motorist shops? Yeah, I know. They moved next door to the classic hardware shops that sold boxed fasteners singly, or by weight, like sweeties at Woolworth, just across the road. Bah Humbug!

Good news, I started the Bx this afternoon. I had a quick go a few days ago but the battery wound down after a few turns obviously from standing all that time. I recently bought a Floureon boost starter from the bay and tried it out today. The car fired up on the third go and was standing up in no time at all. I let it run for a few minutes till the revs started to drop then just eased it forward in "D". Let's hope the weather hangs on for a while so I can get some work done.

A quick update. Due to work commitments and poor weather I have not worked on the Bx since my last post. I have still been collecting parts for jobs that will need to be tackled though and there is some good news on the horizon. I am retiring next month so providing we get some fair weather I am hoping to restart work on the Bx. I have just had a week off and most of the time was spent sorting my various pensions out. I never knew it could be so time consuming, I have filled out reams of forms and signed my name countless times and am looking forward to hanging up my boots at last. I did manage to do some weeding and strangely found it immensly satisfying! Ironically I am writing this at work, a week of nights but tonight is very quiet. I have twelve shifts left to work. Counting the days....
Dave.

Enjoy the retirement, you do also know that you can take all of your pensions as cash if you don't want to buy an annuity & i hope you shopped around the marketplace for the best deal

Yes I went to an open market advisory service whose costs were paid for by my employer. My pension's worth bugger all anyway, I couldn't afford to take the cash there's so little of it I'd starve to death.

Pensions have changed beyond all recognition during my working life. So what I will say to anyone reading this is if you haven't got a pension or you are in a poor pension scheme try and boost it somehow if you can or take out some AVC's. My pot is worth £130k, sounds a lot doesn't it, I thought it was. It will give me £5k a year! I have gone from being comfortable, 2-3 holidays a year to poor overnight. Don't get me wrong I'm not bitter though, I'll just make the most of it. I supported a lot of charities but have cancelled all my subscriptions now which saddened me, it gave me a buzz to think I could help those less fortunate than myself. I'm cancelling Sky and going Freesat and looking to change the phone and broadband for something cheaper. One of my old pensions was final salary inflation linked which I kept separate from the others because of all the benefits tied in. I will get a £16k lump sum with that and 40 quid a week. I plan to buy our funerals with the cash so the kids don't have to fork out for them. Only cheapies, no gold handles or any of that rubbish, when yer gone yer gone.

Hopefully there'll be a bit left to do a few bits around the house. I already did an extra year so I finish on my 66th birthday, I don't smoke and only drink one or two pints a week. I'm looking forward to finishing in a couple of weeks and I am hoping I can get by without having to work at B&Q

Err well I'm still here and so is the BX. This year has been another bloody whirlwind and we've had a lot of stuff done to the house and garden. Cars have come and gone and I recently sold my low mileage Kia Venga to finance having the drive block paved. I then bought a 1.9td Synergie which I've owned about three weeks. It's a one owner car bought through the FrenchCarForum. I just had a clutch fitted and have clutch and gear change cables on the way.
Anyway, today I put a freshly charged battery on the BX and she started third go and is now standing up which I'm very happy about. Once the block paving is done she'll be moved to her own spot so work can commence and hopefully get mot'd in the spring. 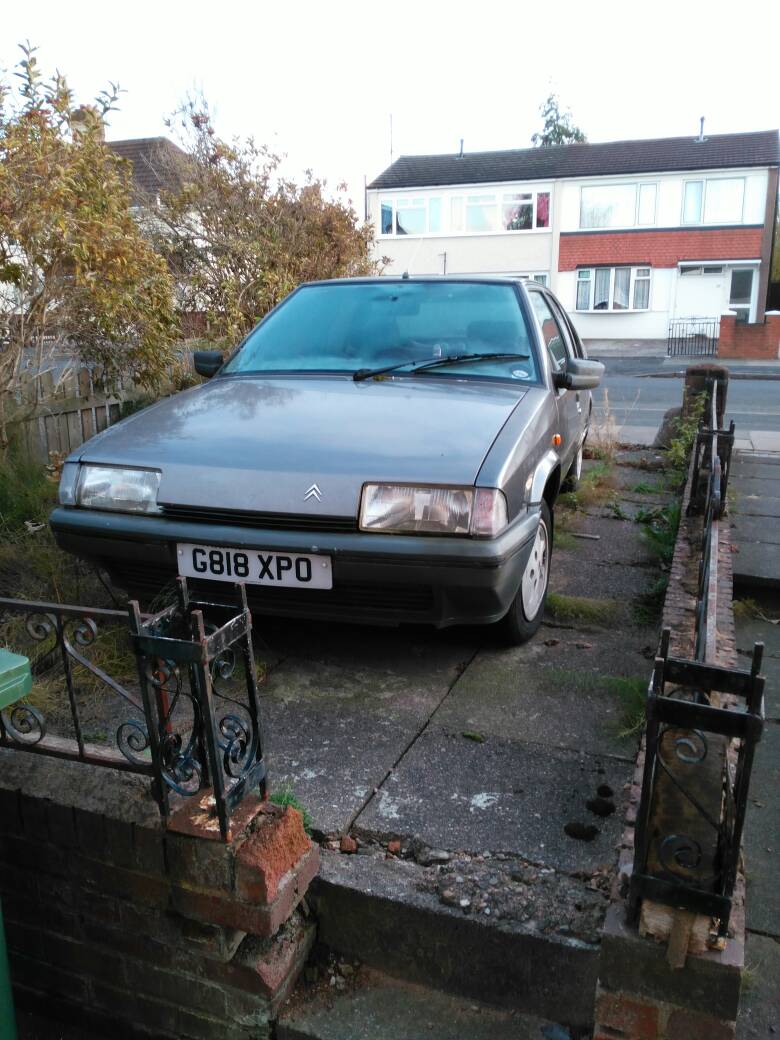 Sh¡t major problems. We are having the drive block paved so I moved the Bx today and the rear suspension collapsed, stop light on and lhm everywhere. I managed to very slowly park it on the chapel car park next door but I think this might be the end. Unless anyone knows how to get it standing up but it seemed to empty the tank really quick.