DMF's appear to make the noise levels at idle acceptable for a modern diesel, aside from that what do they actually do over a single mass design? apart from break of course

BX Bandit wrote:Friend wants to know if there is any Irish Draught in TC?

No, he's an Irish Cob. It's a breed that's only been formally recognised over the last 15 years, but has existed for ages with the gypsy community (but they don't do paperwork so only verbal historical records of breeding...) I'm starting to sound like a horse expert now!

I''ve yet to properly sort through my Scotland photos, but will upload a few in due course, together with a write-up. In a nutshell a good time; lots of miles (1686), lots of laughs, and over too quickly

This evening was spent doing DIY (earning brownie points?) after unloading the car. This is why I need an estate! 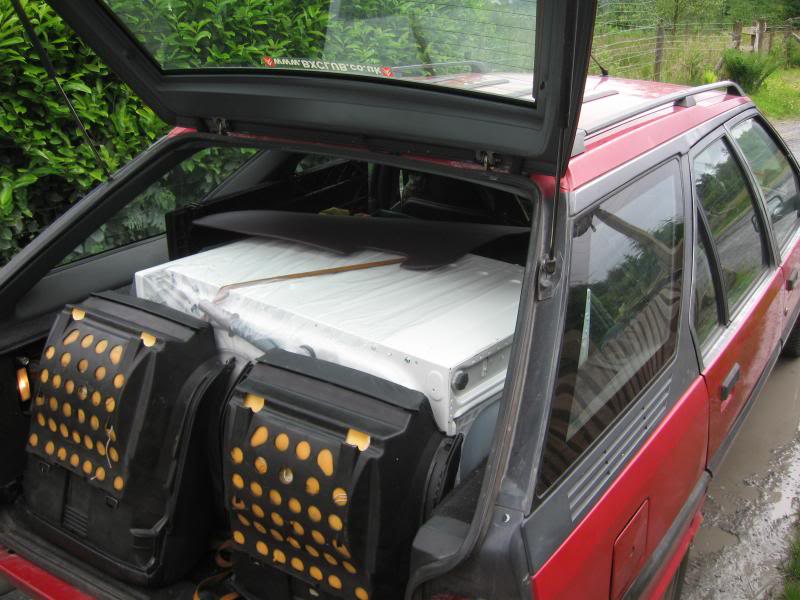 Utilising the suspension to unload: 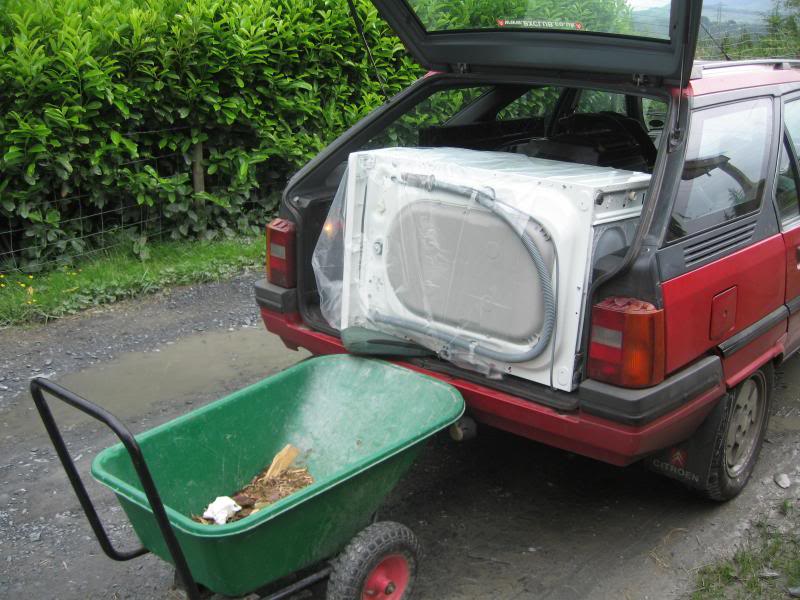 Insulated the roof with a mixture of polystyrene sheets and leftover loft insulation.

Then plasterboarded it all - it was an awkward shape so took quite a lot of cutting.

And then plumbed in the new washing machine. We got over a third off just because it was cosmetically damaged!

As soon as I'd finished work I dashed to the car and set off on the long drive north, dropping off the BX seats and grabbing a Domino's pizza on the way. I enjoy driving at night as the roads are quieter and the drivers generally more professional, but this was the first time I'd seen sunset and sunrise on the same journey! It all went pretty smoothly, and I only saw one other car north of Inverness! I arrived at the campsite just before 5, and grabbed a few hours kip in the back before everyone else awoke.

I was keen to visit Cape Wrath, as last time I'd been this far north and intended to do the trip, I was too early in the season for the ferry to be running. The others had arranged to meet up with Hilary in Ullapool for lunch, so I agreed to meet them later. After waiting an hour for the ferry, we were told we would be met by a minibus on the other side to take us on the 11 mile journey. After another hour's wait I gave up and started walking...

On the way I had a call from an understandably worried Sandre, whose engine would not even crank over after she'd turned it off in traffic. Fortunately after a cool down it started again, and she continued on her her to Applecross to meet the rest. I'd only made it a few miles when the minibus appeared, which picked me up and took me the rest of the way. Stunning views, but next time I will walk or cycle it - the cramped minibus spoilt it for me.

Once that was over I headed south again to try and catch the others. The Scottish drivers were generally courteous and let me past if I was behind them, and I caught the convoy up just south of Gairloch. We took the coast road to Applecross in the evening sunshine...

...and set up camp there. We had a great meal on the campsite restaurant, where much wine was consumed and hopefully we didn't keep too many people up with questionable taste jokes

Captions please? I don't want to know what Paul is demonstrating!

I slept very well that night, and the following day we headed for Skye in the rain. The Bealach na Bà was unfortunately shrouded in mist which meant no view and slow speeds

Once over the bridge onto Skye the weather improved and we found a great site (thanks to Anne-Marie's book) which was right on the beach and only one step up from wild camping, which is a plus in my book. Sadly a lack of suitable stones for skimming gave it a black mark.

After a barbecue the drizzle started, although warmed by the wine and a walk I decided a dip in the sea was in order. For some reason Paul seemed intent on taking pictures of my semi-naked body

I can only assume they are for potential blackmail material...

The rain came down heavily in the night, but my tent fortunately remained dry inside.

In the morning the campsite owner took a photo of us all for their Facebook page:
" onclick="window.open(this.href);return false;

Then it was south again, via the Spean Bridge Commando Memorial where we stopped for lunch...

...and then through Glencoe. The photos NEVER do it justice - it's impossible to convey the sense of scale in a picture but you feel incredibly small standing there.

Then onwards to Loch Lomond...

...all the campsites were either full or did not take tents. I found a suitable spot for wild camping, and I dropped my stuff off there then went to park my car a disatnce away while the rest were unloading. When I got back the midges had gathered, and it had been decided that everyone would head back to their homes rather than be eaten. Ironically they were no worse than around here, so I was less bothered (plus I had a head net), although I agree they are a complete pain. It really makes it difficult to enjoy anything outside

I had some time to kill before going to Manchester for midday the following day to collect a washing machine, so I had a bite to eat and a leisurely drive down before camping in some woodland north of Lockerbie. It was interesting to compare the fuel consumption on the way up and the way down on an almost identical route but different (steady) speeds.

That's a best figure for this BX, although I have a managed 62 mpg driving slightly more slowly in a standard 1.7 TD. I was really struggling to keep the speed down though as it takes so long to get anywhere! The 41.8 mpg figure is what I average in normal use, and was on similar roads to round here where you are often speeding up/slowing down for corners and slower traffic.

Great write up Mat and some stunning pictures from Cape Wrath. I'm not sure what Paul is up to in that picture but I had tears in my eyes as he tried to describe April Fools Day to Chris haha.

I enjoyed reading your scottish trip, 41.8mpg usually, you hooligan

It's not that the 1.9 makes the car that much faster - it just feels like it would pull *anything*/drive up a perpendicular surface. Too much fun, thanks for letting me 'ave a go

What did you think of the Marshalls on mine?
Diagonally parked in a parallel universe
1991 TZD hatch (Triton Green)
1992 Hurricane
Top

mat_fenwick wrote:...all the campsites were either full or did not take tents.


I find this a frankly baffling trend - In my world, a campsite that doesn't accept tents isn't a campsite, is it?

Try a 2.1 TD. Not overly powerful, 115 bhp IIRC, but immense levels of torque. I wonder if the mighty 2.5 TD could be persuaded to fit in the BX's engine bay?
Mark Smith

The only 'campsite' that would actually allow tents wanted £19 a night, per person!! Or £6 a night for backpackers!! Suffice to say we didn't bother with that one. Scotland has become VERY expensive in the last 10 or so years.
Mark Smith

What did you think of the Marshalls on mine?

To be fair I think the mpg was mainly the difference between keeping my momentum up on the empty fastish roads of northern Scotland, and regularly having to slow down and accelerate, which is what my normal day to day driving also involves. Obviously I didn't push your tyres to the limits, but they certainly felt good enough to be worth considering

It does appeal in a way, but I like things to look factory and the larger engine would require a bit more fabrication I believe (pipework etc.) Plus it struck me on this trip that I really have got the car exactly how I like it. Similar performance to a modern turbo diesel, reasonable economy, reliable (

) so there's nothing I'd want to change.

Apart from maybe getting the fuelling more finely tuned - I'm conscious that I tend to feed in the throttle gently to minimise smoke, so it does seem like the fuel delivery rises faster than the engine demands.

That smoke is a doddle to sort out on a Bosch mate whether it's base line fuelling or turbo fuelling.

I've been enjoying the warmth this past week (if only the Sottish trip had been a couple of weeks later!) - by enjoying I mean collecting, cutting and splitting firewood for next winter. Still loads to process, but hopefully will make some progress at the weekend.

In vehicle related news, I took the van for an MOT today and it failed. Not on much, but it annoyingly ruined my 100% record for the last 12 MOTs on the fleet

Just on corrosion to the ferrule on the rear brake flexy hose, so I've ordered a set of stainless hoses for it - I was surprised to find them listed for a van, as it's hardly a performance vehicle! But I do think they give a firmer pedal, and should last indefinitely.

you, need one of these;