Well Mat, I just fitted a pair of standard front spheres from AEP, those IFHS ones and we now have front suspension!. Those old Amteks (4yr and 40k from GSF) were totalled, no wonder it felt so stiff. Just drove round the block to check it all worked after subframe replacement and other than a clonk from a drop link it was so smoooth,mmmmm. My fault on the drop link left it slightly loose whilst tightening wishbone pin and other stuff, and it was tightened up fully as soon as I'd got back.

Probably do the Acummulator tomorrow.

On a different note,

In other Citroen news I seem to be getting a run of them in for work on them - got a ZX in at the moment for a cambelt and water pump change, then a Berlingo in for a rear axle swap (postponed from the summer). The ZX owner had done a Google search on the XUD engine, and apparently my name came up! 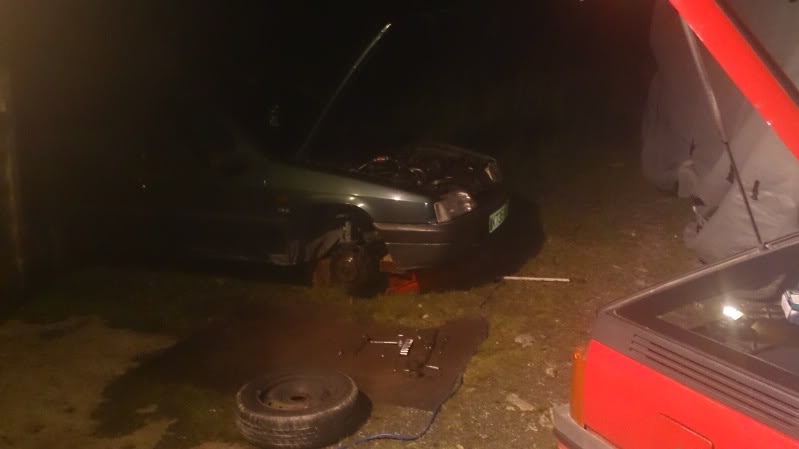 Prefer doing the job on a BX though...dunno why - maybe familiarity?

[quote="mat_fenwick"]. The ZX owner had done a Google search on the XUD engine, and apparently my name came up!

Quite possibly! I'll have to ask him what exactly he searched for, as I can't find anything. Ah well.

ZX nearly done, although the camshaft seal he supplied turned out to be a flywheel end crank seal. Fortunately I had a set of cam seals on the shelf. Getting a bit late now, so called it a night - plus it started raining

Nothing to report BX wise, apart from covering over 3000 trouble free miles this month. Spheres riding well, and new tyres should be here in a week.

Number 1 priority is to stop the bloody Discovery from leaking! I thought I'd cracked it last year, but it seems the hosepipe test was not thorough enough and it still leaks after prolonger rain. I guess the moral is not to assume that it's only leaking from one place! Leaks fixed last year = driver's door seal, alpine windows and rear lights (bizarrely the sunroofs which often crack around where the drain tubes attach, are fine).

So it was out with the headlining again -on the plus side I can now do this solo, in less than 30 minutes - to see if I could see anything. Absolutely no evidence where it is getting in, just where it is dripping out of box sections. As far as I can tell, on one side it is entering via the roof bar mounting hole, running on the inside of a reinforcing channel and then into the box section. On the other it seems to be via the roof to gutter joint which has a small crack in it, again running out of sight into a box section to appear in different places depending on the angle it's parked at.

The rain stopped the evening before last for a few hours, so I've covered the areas with waterproof tape, and so far, despite heavy rain yesterday and last night, no water has got in

I can actually see a bit of blue sky today, so may be able to seal it all up

In other news I've been working on a very long term project of mine - my first car!

I've mainly been assembling the brakes...most bits are new, although the shoes I bought are slightly different so am re-fitting the barely worn originals.

I'm trying to make progress on the small jobs, in the hope that it will keep me motivated when I have to cut away large chunks of the floor pan! I've barely touched it in the last 7 years, so any progress is better than none.

Busy weekend! Started off by giving the BX a good service - engine oil & filter, gearbox oil and fuel filter, and changed one of the front ABS sensors. Not 100% sure which is at fault, as it's very intermittent. But I changed the one I didn't change a couple of years ago, so hopefully got the right one! No more spares though

I also gave the Focus a service in readiness for winter hack duty, and sealed up the Discovery before reinstalling the headlining. It seemed like I had missed a gap in the guttering sealant, presumably from when it was new. 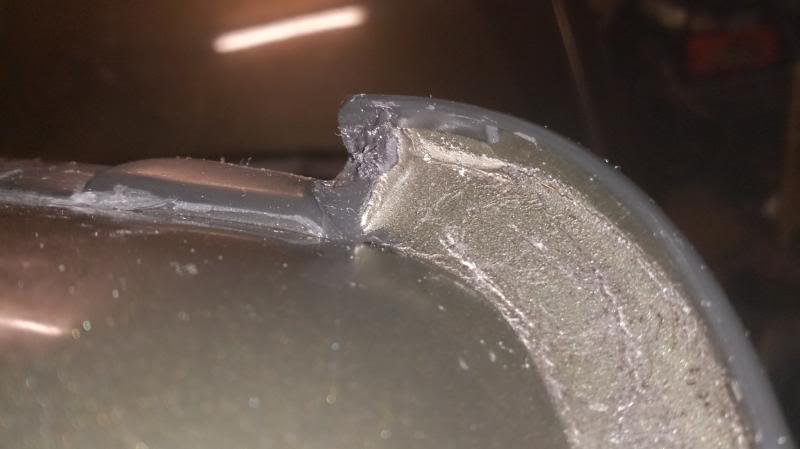 Then late on Saturday I took two of the BX wheels to a local 'one man band' tyre fitter, only to get a subsequent invitation to do some off roading the following day. This was a problem, as the BX was on two wheels, and blocking in all other transport.

So I put the spare on, and moved it!

Unfortunately the ground was a bit uneven so I scraped the disc shield slightly. But managed to move it, and take off the remaining two wheels to drop off on my way on Sunday. Got back this evening, re-fitted the wheels (in the rain

) so am looking forwards to see how it drives tomorrow! 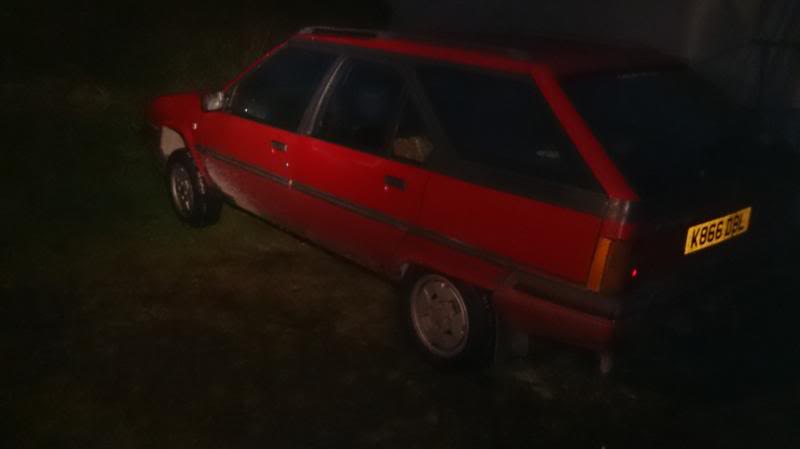 I got 23k miles out of the last set of Michelins over the last 15 months, which is a record for me in the BX. I'll be pleased if the new Hankooks last nearly as long!

Very early days yet, but happy with the new tyres. Obviously I'm comparing them with worn out old ones, but it feels better than I remember the last time they were changed. Not sure if the gearchange is better too - I used Total BV for the first time ever, but again that could be comparing 25k mile old oil with new.

Lovely light on the way back home, so I stopped to take a photo

mat_fenwick wrote: In other news I've been working on a very long term project of mine - my first car!

Work your way down his signature list and have a guess.

Great to see some progress with that. Can't wait to see it on the road.
www.classichub.wordpress.com
Top

Dollywobbler wrote:Work your way down his signature list and have a guess.

For a bet. I'd driven it for about 5 years and 100k miles, but never really been happy with the performance, when a wondered if I could fit a Rover V8 into the rather empty engine bay. A friend of mine bet me I couldn't/wouldn't, so I had to prove him wrong. It would have been easier and cheaper just to buy him the drink, but that's not the point...

Progress had stalled for a few years, but is now picking up again. I'd started off with the intention of a full restoration, and every single bush, suspension joint, togther with damper and springs was brand new. But now I'm leaning more towards getting it structurally sound, mobile and road legal. The cosmetics can wait for now!

Changing the BV on mine definitely improved the gearchange on my Athena but that box was horrible when I bought it. 53k and a really notchy (not crunchy) change. After 15-20k it was a lt better. Now at about 119k with new BV after clutch change (2k ago) it is better than ever. I needed my hand fully on the lever to change it to start with, now it's one or two fingers to slip it into gear. I think without the linkages the box actually has a good change. That's the loss with front wheel drive, you don't get a gearbox right under the lever!

Surprising how different drivers can alter the feel of the gearchange. My other one (157k) has always been sweet, the way it should be, bar a knackered clutch!.

Despite Citroen removing the 60k gear oil change from the service schedule (1.6 BE3 box), I reckon it is still worth doing.
Top

mat_fenwick wrote:For a bet.......... It would have been easier and cheaper just to buy him the drink, but that's not the point...

Yup, it's the principle! I reinforced the clutch arm this weekend, but am going to be short of time for a few weeks so doubt I'll be able to get the gearbox in for a while.

Had to change a wheel bearing on Lana's MINI as well, which actually went pretty smoothly! Nice to have a job go quickly.

On the BX, it turned out that the original ABS sensor I replaced a week ago wasn't at fault, as I had the light come on a couple of times this week. Assuming that it's definitely a front sensor at fault, it must be the other one which I changed 18 months ago, so I put the one I'd just removed on the opposite side. 50 miles and no light, but still early days yet...

Today was MOT day for the Focus, should anybody be interested in a Ford

Ironically for a Citroen owner, it failed on a broken coil spring! It must have occurred while it was being sat there, as it made a nasty graunching noise on full RH lock which wasn't there last winter. Ah well, time to dust off the spring compressors...