Life slowly getting back to normal, but not helped by finding out the limit for outbuilding cover is £1500. Which leaves us considerably out of pocket

But at least stronger locks are on, which I will bolt into place tonight rather than relying on screws which could be levered out. Doors have been reinforced, and a section of heavy angle iron put on the sliding door to stop it being forced off the runners. I've boarded out under the eaves to stop anybody climbing in, so hopefully we can worry less now. Put an alarm on the most vulnerable shed, and the CCTV is now up and running.

As it happened, it picked up something today while I was at work - we live up a forest track so there is no passing traffic. Imagine my worry when I saw a flatbed Transit parked outside the workshop. Police were no use unless I could say that a break in was happening, so I had to go back and investigate myself. Turned out it was just some guys from the Forestry that had come to do work, but it didn't help my heart rate!

As for getting rid of any bodies, with several hundred acres of woodland behind us, that wouldn't be an issue

Just hire a digger and job's a good 'un. Logging trucks would cover any tracks...not that I've given it any thought

I went down to my local power tools place, partly to see if anyone had offered them my stuff but also to ask about buying replacements. Turned out they have one of their ex-hire strimmers for sale, for a decent price so I asked whether I could put a deposit on it until the money comes through. It was rather nice when he said "Don't worry about a deposit, I know you - if you want to take it now you can just pay when you have the money"

But I told him I'd better wait until security was fully beefed up, and probably when they've finished logging so we can keep the main gate locked. Still, it was a kind gesture.

Speaking of which, many thanks to Brian (electrokid) for the loan of a camera which arrived today

And thanks also for the words of support both public and private. I might even end up feeling in the Christmas spirit at this rate! (Only caught up with my advent calendar this morning - been too busy to really think about stuff like that).

Keep your chin up bud and try not to let it affect you too much, contrary to popular belief scumbags like this are a very minute part of society and not worth worrying about.
Kevan
1987 Citroen BX MK1 diesel estate.(Currently in dry storage)
1997 Mercedes C230 W202 - daily driver.
2010 BMW X1 SE 2.0D Auto - Her indoors daily driver.
2003 Land Rover Discovery Series 2 Facelift TD5 - Daily driver / hobby days and camping.
1993 Land Rover Discovery 200tdi Series 1 3 door - in need of TLC
Top

Sorry to hear about the break in mate. I had a load of gear nicked years ago, and although I never got it back one of our shady neighbours managed to track down the culprit and make sure they knew our street was off limits - never had an issue after that!

That is a real worry. But with hindsight the security we had did not stand up to much of an attack, so with the improvements I've made/am making I think it will encourage anyone to move onto an easier target. 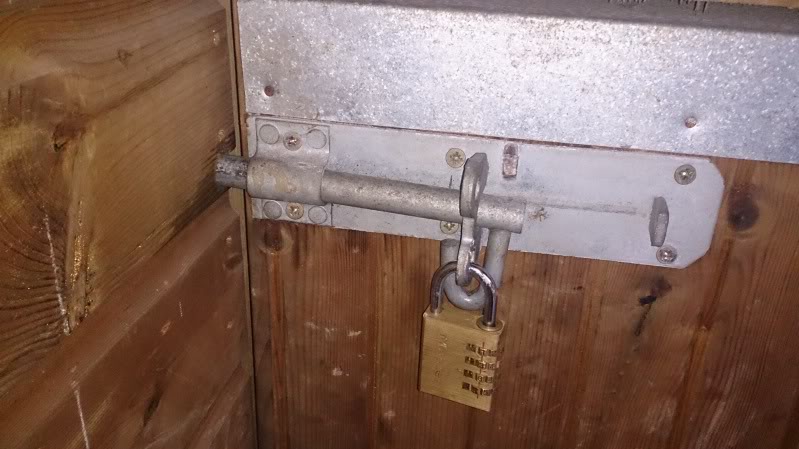 I had thought the previous locks would be enough of a visual deterrent, as I'd drilled out the screw heads to prevent simply unscrewing. And had wrongly assumed we'd be sufficiently out of the way for thieves not to trouble us. But I was actually surprised at how easily the bolt gave way, with little evidence of bending.

I'll get a few photos in daylight at the weekend of the current setup, and any pointers/weak spots would be welcome.

You can only do so much Mat , if they really want to get in they will get in. A workshop I used to work at got broken into several times so I made some very strong steel doors with triple lock system as a deterent, proper Fort Knox kind of doors; next time they broke in the knocked through a breeze block wall with a sledge hammer, all doors intact!

Completely agreed - what I want to acheive is no obvious weakest link, and also no stupidly over the top security which says there must be something worth pinching inside. If I can get the doors to be equally secure as a 3x2" timber framed wall (anchored to brickwork) clad in T&G then I'll be happy.

And I'll check the insurance small print next time to make sure the full value is covered! Fortunatly my best chainsaw was in the house at the time so could have been worse. Anyone got a cheap generator for sale...?

First job was to put up CCTV: 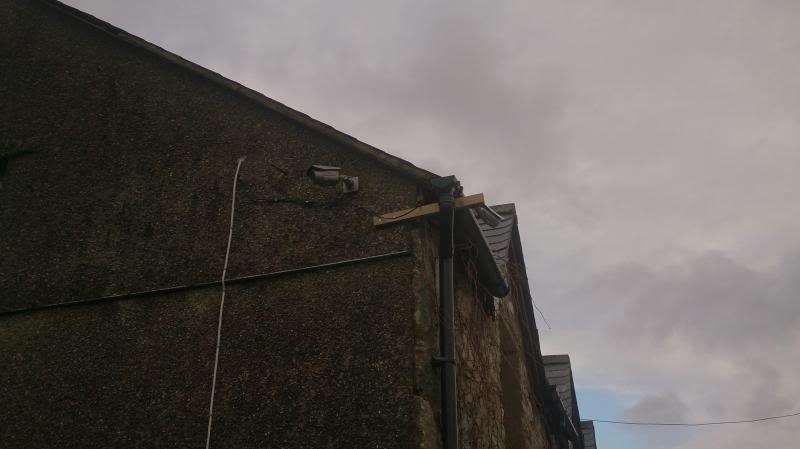 Not a neat job but given the wind was threatening to blow me off the ladder (and it was dark) it'll do for now...

Then I boarded out under the eaves, to prevent anyone looking in or gaining access that way: 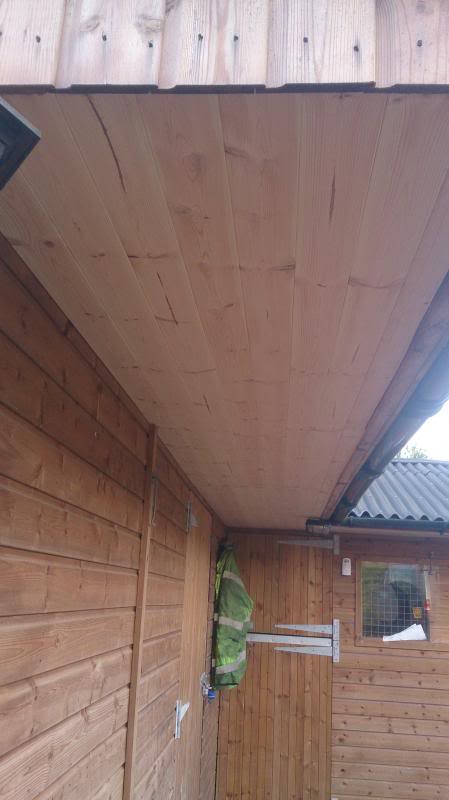 Stronger lock on the outside, bolted through with penny washers on the inside to prevent the bolts from being pulled through: 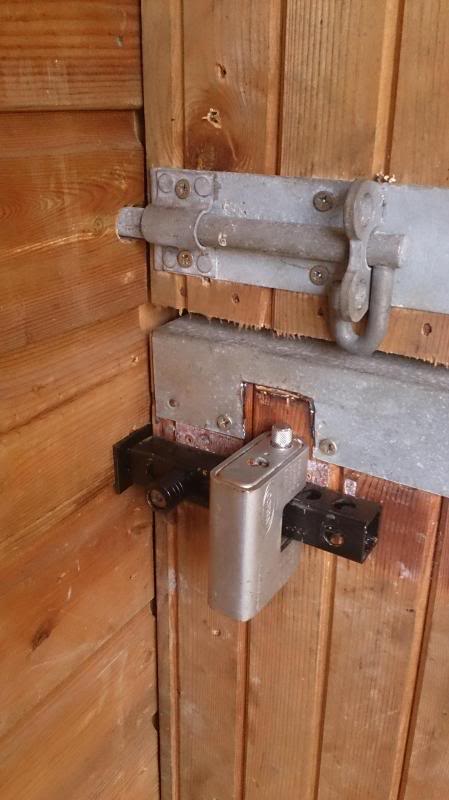 And to stop anyone simply unscrewing the hinges, I've bolted them on in a similar manner - using stainless screws which would be more difficult to drill out. But if someone is prepared to bring power tools, they could just cut a hole in the wall of the building; I reckon it's as secure as a wooden building is realistically going to be. 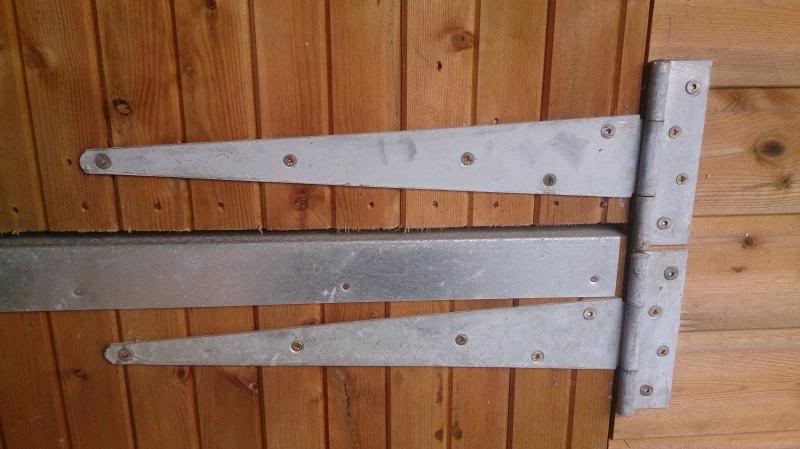 Cunning plan 28, which works. Hang the door backwards so it opens the wrong way to the apparent hinges visually fitted. Mr Burglar can spend sometime trying to open the hinged part of the door to no great success.

Plenty of chainsaw work round here Mat!. There were about 6 or seven trees across road to petrol station for a start... Some small roads were passable after storm but not many. Loads of guys could not get into work on Christmas eve, or when you could it was too late to be any use. Pines, birch, oak, holly, beech all kinds of stuff. Even seen previously 100' Scots pines snapped in half 40' up....

Hopefully get next years firewood part collected even if not split. Lot of trees leaning more than before too. I don't have to worry about flooding and even kept power, unlike Haslemere, Liphook and a lot of small villages around here. Looks like the Wey and Mole (rivers) might get a bit higher after tonight, weather coming in right now (10pm) so we shall see another change of landscape if it blows 50+mph. At least with the woodburners we can keep warm and even cook if really needed (plus camping stoves) unlike some more modern houses which assume power continuity. I did plan for being 'stranded' as the snows of '63 left no power for around 10 days here (all below freezing 24/7) and I decided a contingency would be sensible.

Seasons greetings and Happy New Year to you and Lana, keep the BX going.
Top

Currently drying out after being out in tonight's storm trying to ensure the hen house doesn't blow over like it did a couple of days ago. Lights flickering but still on - no generator any more but if needs be I'd run the van on fast idle and use the big inverter in it for the freezer etc. Would really chew through the diesel though.

My nearest Machine Mart are having a VAT free sale on Sunday, so will see if I can pick up a bargain genny then. Looks like we are very lucky compared with some parts of the country from the sounds of it! This is the first winter with little tree cover around, so feeling quite exposed but no damage so far.

I have a new, unused Honda 'copy' BGE3000 generator here. 'Bulldog'? I bought it for my sister's narrowboat after her then ex boyfriend nicked my ex army generator, but she has never taken it away. Now she sold the two working boats leaving the 45ft modern which has no need of this large genny. £200. Trouble is I am a distance and a bit away from you, if you were interested.

Glad I checked out my new gaff for flooding etc. If we have more rain the Vale will go under but despite the Ock going about 270 degrees round my little hill it remains dry. The Vale is a large clay bowl so floods often.
My brother has had his storage facility flooded out down in the Thames Valley. The water just rises out of the ground down there, as it is effectively a massive lake full of gravel, till it reaches the Goring Gap, and punctures through between the Chiltern Hills and Berkshire Downs. Must have been an amazing site when it was a lake the size of a county and flowing out through Essex.
Miguel - 16 TRS Auto S, light blue, 43k miles - £450
Pluto - 14 E S, White, 105k Miles - in work
Egbert - 19 16v Gti, White, A/C & Leather, - Keeper
Walt - 17 TZD Turbo S, graphite, 70k miles, good op extras - Keeper
Scraper- 17 TZD Turbo E, blue, 208k miles - parts
Homer - 19 TXD E, Red, 189k miles - £250
Gary - 17 TZD Turbo E, 118k miles - in work

Thanks for the offer TB, but I'll probably just get one from Machine Mart. Not a bad price with 20% off, and significantly closer, with a warranty.

Back to cars, although not the BX...the Stellar now has a gearbox! Bit of a milestone really, as it should be a fairly simple job now to get a propshaft made, and get drive to the wheels for the first time in 10 years.

After 3 hours of lifting, jiggling and swearing it finally slid into place which was a huge relief

up until that point I didn't even know whether the gearbox would fit in the transmission tunnel, let alone slide into place without removing the front subframe and dropping the engine!

The R380 gearbox is slightly longer than the LT77 I had which I planned to fit, which is fortunate and also annoying. Annoying because I'd already enlarged the gear lever hole to suit the LT77, but fortunate in that the gear lever will be exactly in the right position now. Not yet checked the angle of the gearbox, but hopefully it's close enough to the angle of the rear axle flange that I don't need to raise the gearbox any more (which would involve modifying the transmission tunnel).