Back into commuting duties for the BX today!

It fired up exactly the same after 3 months standing as it usually does, which was encouraging, and no (new) leaks! Nice to have a bit more comfort too. New indicators and headlamps now on, and getting covered with road grime already...

Such a great looking car. Glad she's back in service.
www.classichub.wordpress.com
Top

Aww, thanks! Really enjoying being back behind the wheel actually (more than I thought) and partly wishing I'd taken that down to France. Not that the Focus did badly, but I missed the extra torque when cruising, and it's got a bit of a vibration around 80 mph. Which became rather annoying after 1000 miles in a day! I hadn't realised this until well into the journey, as opportunities for that speed around here are somewhat limited!

It was actually more than that on the way down as I detoured via Oxford to pick up a set of exhaust manifolds for the V8, and stopped off at a mate's north of London. Then we found that the Col du Lauteret was closed due to falling snow, so a rather large detour north again to go through the Frejus tunnel. Arriving there in the early hours after a long day, my mood wasn't improved when I found that it was €52 return, and was closed in my direction for the next hour!

The morning after we arrived!

Still, it was a good holiday, and we managed to bring some wine back with us. Ariived at the Chunnel 3 hours early and was prepared for my wallet to take a beating when the lady said there was room on the next train, but she'd have to charge us - having previously had to pay more for the amendment on the ferry than the original ticket cost. This time though, it was a whole 6 Euros!!! Had to smile too in the petrol station in Shresbury on the way back - it was the early hours and the girl behind the counter conversationally asked whether we had far to go. I told her "Not far" and where we lived (another 70 miles or so) and she said something like "Still a fair way then". I couldn't resist telling her we'd driven from Italy that morning!

Oh well, I'm sure there will be other chances to take the BX back to France in the future...

Had a dry weekend, and went for a bit of a drive over the moors in the BX. The light was good, so decided to get a few shots. 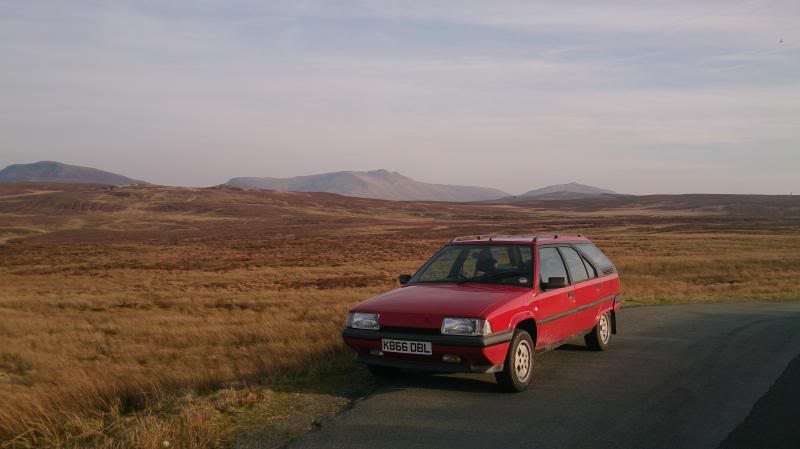 It looks like it's riding a touch high in this shot so will have to look into that - I know there is some slack in the HC linkages so normal ride height is higher if you are approaching it from high. And the road was very undulating, so I reckon it's riding high after a bit of a hump. Got a brand new HC to go on, and then I'll rebuild the one which comes off to go at the other end. The linkages I'll sort out at the same time. 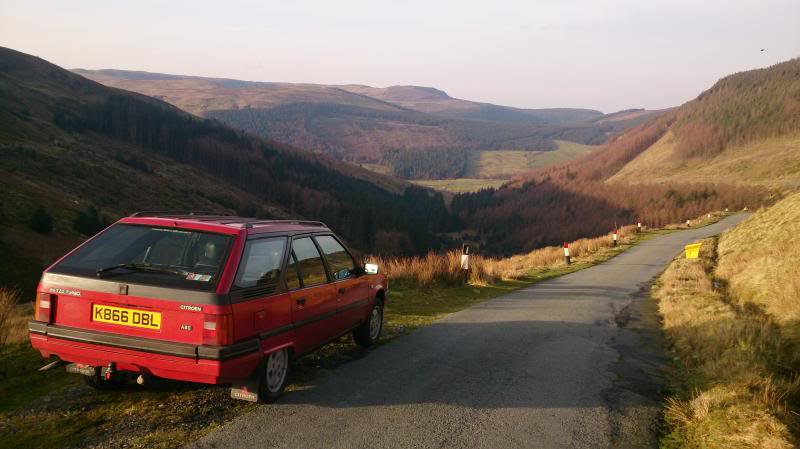 With all the mention of subframe mounting points I thought I'd better check mine - it's something I've been meaning to do for ages. The seem pretty good, but I didn't get round to filling them with wax this weekend as it started raining. I happened to notice today that both sides were wet inside! I don't know how it's getting in, but a bit of a worry and glad I found it now. 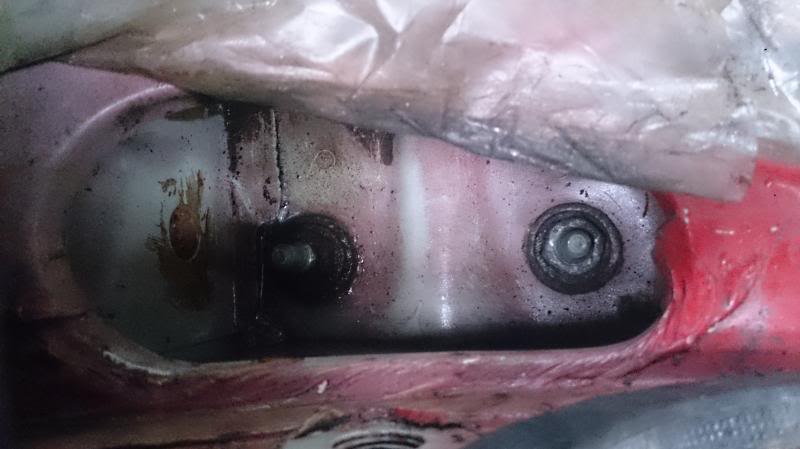 Update to the above - couldn't find any water getting in again since I dried it out, so sloshed some cavity wax in there and closed it all up again.

BX was in danger of tarnishing its reliability record at the weekend - first of all there was nothing from the starter motor after a brief stop, so I can to bridge the solenoid to main +ve terminal on the starter to fire it up. This turned out to be deteriorating contacts in a relay I put in late last year to bypass the ignition switch...not a good lifespan! But an easy fix.

Second problem was a few miles later when there was a clattering noise coming from under the bonnet. Opened it up to find that one of the 5 ribs on the alternator/AC belt had snapped and was flapping around. A few minute job to slice it off and continue, but a couple of miles further along there was another noise and the charge warning light came on. Totally shredded.

As it was raining heavily, I decided not to fit the spare by the roadside, but just to cut away the remains and continue on battery power alone as we were only about 30 miles from home. The puzzling thing is that the belt was only 35k miles and 3 years old, with no sign of perishing. I'd have thought that if I'd overtensioned it (which I doubt), it would have failed sooner. Poor quality belt?

What make of belt did you fit Mat. I've found Gates belts to be excellent in terms of longevity.
Mark Smith

It was QH, or at least marked as such... I've not really done enough comparison to find that one make lasts longer although never had a problem with Gates or Dayco stuff. Had one belt on the HP pump which would slip no matter what the tension, so guessing it was made from harder rubber; and a similar one on the van driving the alternator - tightened it up every day for a week after fitting, until it snapped!

Something seizing was my first thought too, but alternator and compressor are fine, as are the tensioner and idler pulleys

I had the front bearing on the alternator sieze up. It made some relatively unidentifiable noises accompanied by faint burning smells immediately prior to jamming up completely, so it gave me some warning but not very much, and when it jammed solid then engine wouldn't run at tickover due to the extra load and so I couldn't run the engine to have a look under the bonnet - and if I did keep the engine running there was loads of smoke coming from the bonnet so I had to shut down quickly. At the time I though it might be smoke from something going wrong electrically within the alternator - didn't think it could be a stationary alternator and the belt smoking. So it took 2 people to identify the problem on that occasion -one to keep the engine running and one to look to see where the smoke was coming from - so not identified until the very nice man from the AA arrived (very very late ! )
1992 BX19 TGD estate 228K Rusty - SORNed
2002 C5 HDi SX estate
Top

I even had the front bearing replaced in my alternator as it was squealing badly - turned out the belt was rubbing very slightly on the bottom cam belt plastic!
A 4 rib belt solved the problem until I replace the cambelt and plastics sometime soon.
1988 BX 19 Gti 16v
1991 BX 17 TZD Estate
1991 BX 17 TZD Estate
Top 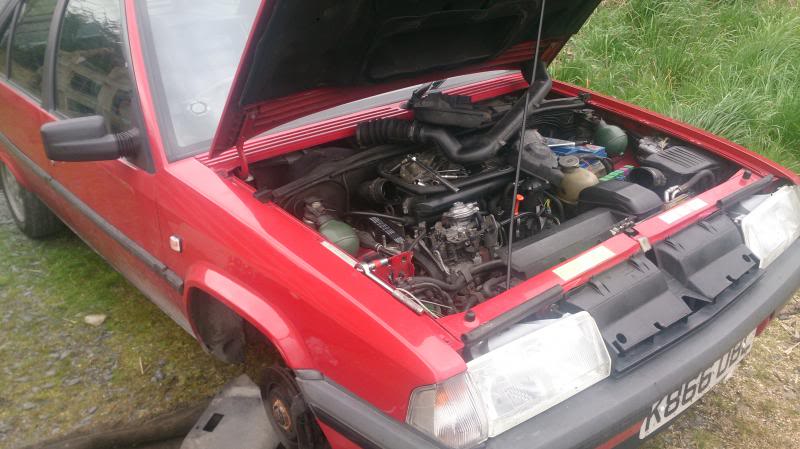 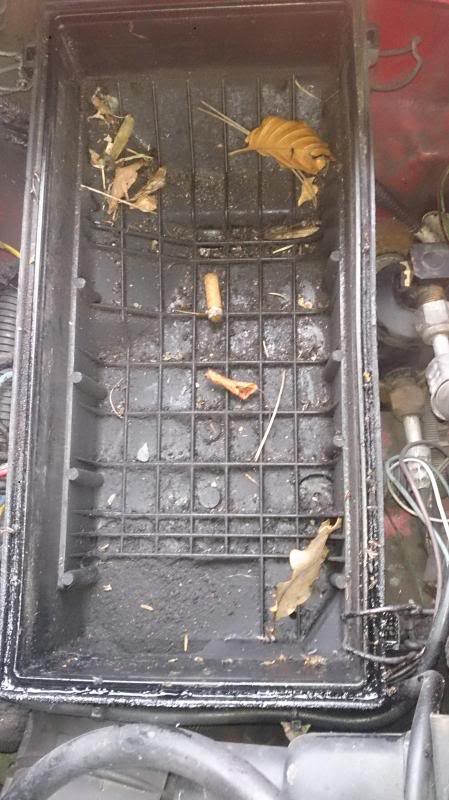 I made a tool some time ago to wind back the pads with a ratchet spanner: 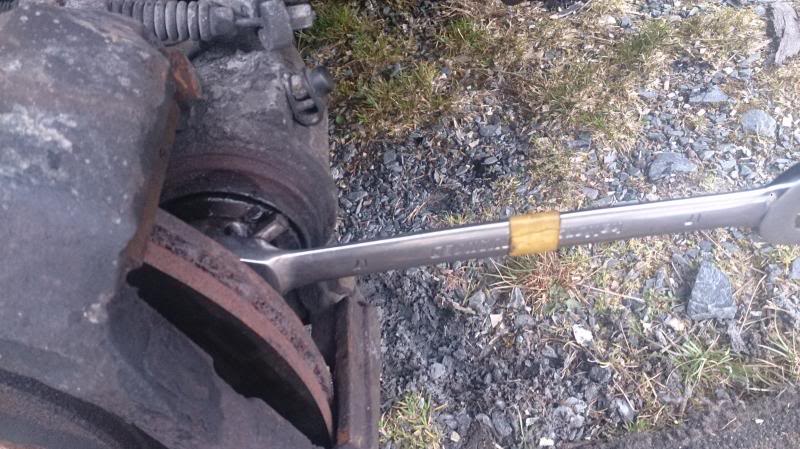 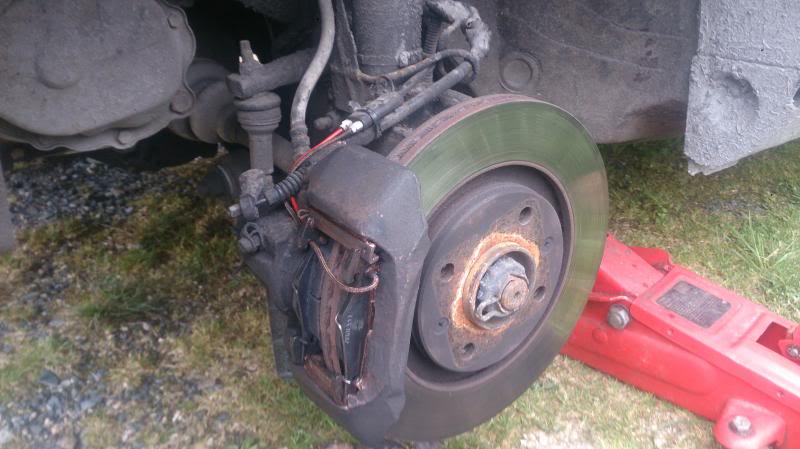 That airbox is filthy, i always give mine a hoover out everytime i did an oil change, also hoovered the K&N for good measure as well. The dirt seems to get solid next to the grid lines, so i just get a flatblade screwdriver & gouge out all the crap & then hoover it out. I did the C5 & was surprised to find the design slightly different even though the BX filter is exactly the same. It's got a tube shaped section which gets narrower the further down you go, it was full of bloody leaves, i suspect it hadn't been cleaned ever. The paper filter was also looking well past its best, so i replaced it with the K&N from the TXD that David took, jobbed