So most of you will be familiar with the 'red shell':

For those not, it's a ph2 16v in red that I bought for £100. It had its engine ripped out for a 205 conversion way back in 2008, and the guy I bought it from bought it (for £150) with the intention of restoring it and preventing the numbers falling by another 1. His situation didn't work out, and I bought the car back in the summer.

My intention initially was to break the remains for spares as we all know some are becoming hard to find. I then found that most of the bodyshell was in exceptionally good condition, with little rot in the usual places, so started to ponder using the running spares from G-SEG (which really is rotten beyond all doubt) and doing the same thing the previous guy wanted to do, but it had to make financial sense (in other words I can't lose money doing it).
It had, however, really let go in one area, which was up the A-pillar. It'd be a windscreen out job to repair properly, and likely end up being on the sort of scale the GT has been. With this in mind I decided it was going to be a breaker, and started pulling bits off it.

Fast-forward to today, and since the weekend at the NEC, I've begun to entertain the thoughts in my head that have been there for a while now, and they're "should I fix it afterall?" They're pretty rare, and this car really did look like a good one before it was pillaged. I've seen cars needing more work being repaired, and some of the advice I'd been giving to passers-by at the NEC would end up making me contradict myself if I didn't follow it too.

) to just do it. Life's too short, afterall. So next year, G553XPO will be making a return to the roads afterall. The only question I currently have is a big one.....which way do I take it?

On one hand, I could polish the shit of the paintwork, get it running nicely and MoT'd etc and then decide what to do with it. I fancy running it around for a bit, but long term I'd be trying to find it a secure home (my big fear is that I put in all this work and then someone bins it, or scraps it a year down the line etc). The bodywork is tired (worse than BAH) and with the best will in the world it'll only ever be a 20ft car....maybe not even that from the front end. It would be quicker and cheaper for me to do, but at the same time the cars future isn't as assured this way, and I wouldn't get too much money for it at the end of the day (which is important, as I've promised a new kitchen to the missus'). Red ph2 16vs aren't exactly the rarest of the breed, afterall.

Second option, is to strip G-SEG of all grey bodywork, fit to the red shell, and then have the remaining panels on the red shell resprayed to match. Would be a lot of work doing door shuts etc, but then I believe (happy to hear opinions) the grey is a more desirable colour than red for a ph2 16v. Most of the bodywork on G-SEG is quite good. Downside is that it won't be original for that car, though it is obviously still an original 16v colour. 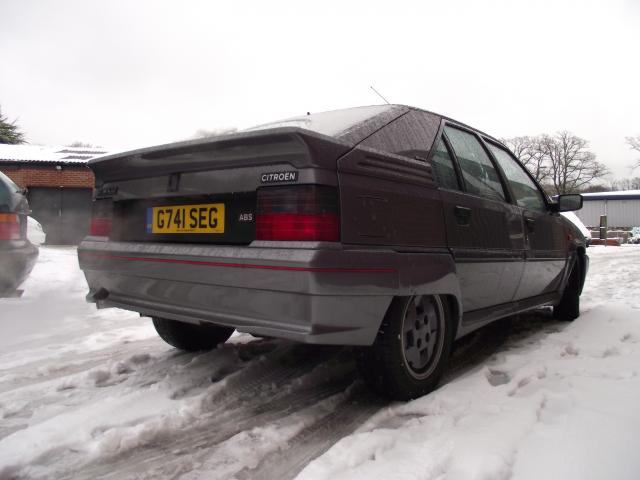 Either way I'll have to partially rebuild the engine before fitting it as it's not the sweetest ever, but we can work with that.

So basically, keeping it red is quicker, easier and original, but won't yield as good a result at the end, nor a rare colour. Going grey means rarer and potentially more desirable for future sales/life assurance, but it's not original and it's a lot more work/more outlay. Risk of outlay not being matched when the car is sold, but more satisfaction in doing the job. But then part of G-SEG lives on at least. Decisions!

So, anybody? Happy to listen to all opinions!
CCC BX monthly column writer bloke thingy - bx@citroencarclub.org.uk

Well, I'm a dyed in the wool polisher who knows next to bogger all about fixing cars - the labour and the time involved - so my assessment is based entirely on eye candy value. In which case - grey all the way. The red ones look good but that metallic grey is gorgeous.

I'd have to swing the other way (no, not like that)!

JayW wrote:I'd have to swing the other way (no, not like that)!

Fair point, though I should point out I'm not selling the majority of parts off G-SEG, so there's not much income there. One of the 'plusses' in breaking it was that it will service BAH for years to come, and that won't change. I wanted a spare everything for the days when you can't find it all anymore

I'd just get the red shed back on the road, & then you can make a decision about changing the panels over from g-seg. Some people appreciate the rat look

You have too many conflicting variables there me old tater and you may well end up trying to bake your tatties but end up with mash. Now you may well think I've turned all oirish on ya and keep using spuds as analogies. And no, I've not been on the crack pipe again.....so this is what I mean

You've got your heart (restore the valver) your brain (parts for BAH) and your bollocks (mrs Kitch) involved.
If you fix and sell the valver, you can't determine what happens to it, although you could refuse to sell it to a non enthusiast. Further, it seems the time and money you put into restoring the valver you won't get back, they aren't fetching outweighable cash yet.
So, can you afford to financially write off the valver for now, and find another channel to raise cash for mrs Kitch?
You then have the most important dilemma resolved giving you time to consider what to do with the valver and even contemplate a full on restoration with a view of asking top value for it.

Difficult one this - if whatever bodywork repairs needed have a minimal impact on visible bodywork, then I'd try to keep the original colour. If it needs a chunk of respraying to get it looking right, you may as well paint it whatever colour you want. As the engine bay is mostly stripped, you could even paint that out, including appropriate paint code on the wing!
Mike Sims
BX 19RD Estate Mk1 - Timex!
BX 4X4 Estate - Oh god, I've done it again!
BX 17RD MK1 - it called to me!
BX14 TGE, - SOLD
XM Turbo SD,GS Club Estate,Visa 17D Leader,HY Pickup,Dyane Nomad,Dyane 6,2CV AZL,Falcon S,Trabant P50,3x Land Rovers (88" series 1,109" series 2a FFR,series 2a Marshall ambulance),DKW F7, Lambretta LD150 x 1.5,Mobylette SP93,Ural Cossack,Ural M63,CZ 250 Sport,Honda Varadero 125,lots of bicycles & tricycles including (but not only) Sunbeams,Higgins & Bates!
Top

Left field - Why does it need painting immediately if it gains perfectly good grey painted panels? It can be red/grey until such time as it is painted. Which would be all the sooner if the kitchen was on a budget. Baby Bellings are very cheap? No. seriously, it comes down to the old adage. 'Are you looking at it, or driving it'? The car is best if it has the best of two cars. What it looks like, as long as it is solid and not prone to decay, is a problem for another day. Surely good GTI are going to become valuable so in the long term, its an investment. If your not doing it for the long term then why are you doing it?

As much as I love the grey its gonna be a ball ache to make the red one a G SEG clone, and I think noone will really care in the long run, if you repaint the red one and make it super shiny people will want it.
Lots of Motors, mostly semi broken....
Top

Bright red with a white roof and white wheels

Some decent points to chew over there guys, thanks. I'm edging towards leaving it red at the mo.
CCC BX monthly column writer bloke thingy - bx@citroencarclub.org.uk

I've gone with keep it red too, not because I personally prefer red but to properly change the colour is going to take a lot of effort (=time/money). Plus I'd guess that if red was the more popular colour then, it'll be equally more desirable now, not that a prospective purchaser can really afford to be that choosy about colour.

Think I need to get a valver soon, before prices go out of my reach

Just one question on looking back at the photo - has it had paintwork around the fuel filler? Looks a mismatch of colours. Might be worth having a good look around underneath that if it has to see whether it's been done well. Though I'd imagine if it was done a while ago and not rusted through yet, it must have been a decent job.