Stand by your van...

Stand by your van...

The photos from our recent Canberra road trip were quite well received, so here a few others of the same car from various places over the years...

North of Reims, August 1999. Went to see total solar eclipse (we thought Cornwall was not such a good idea, and the wine is better in Champagne...) Photo about 15 mins before totality. And yes we did see the full corona - the sky cleared just in time! 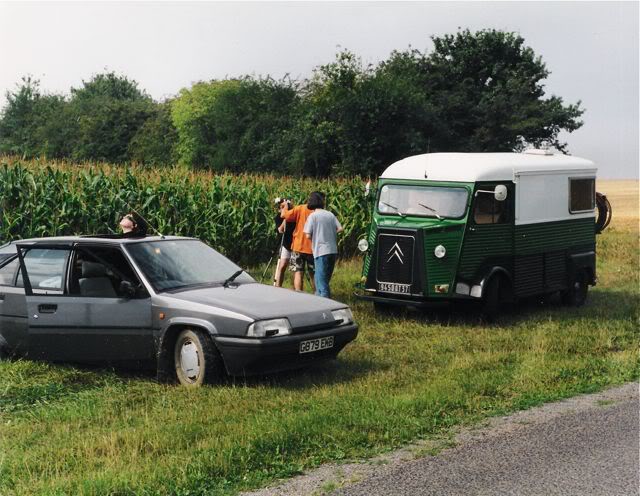 Bayeux 2003 - long weekend to stock up on Cider, Calvados and cheese... 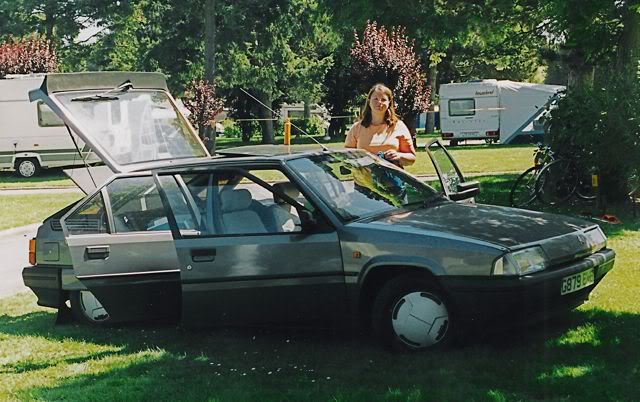 Melbourne 2005. Stuck in quarantine with a fractured return pipe having been dragged out of the container by some drongo without starting the engine (in spite of my instructions on the shipping documents). Took another 12 months to get it road legal, for other reasons, but that's another story... 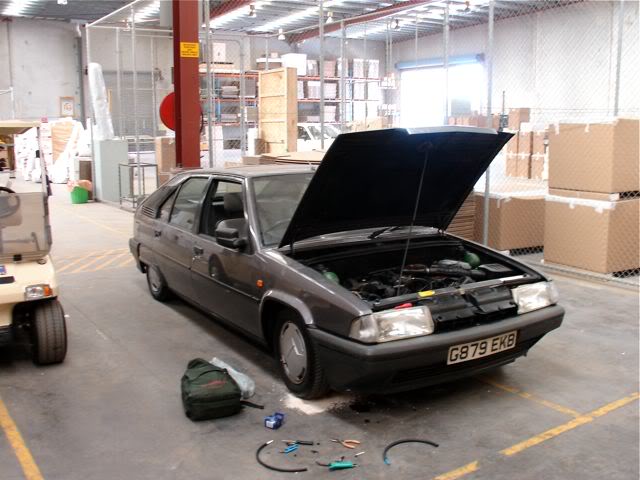 Out of quarantine and meets up with its "new" stable mate. 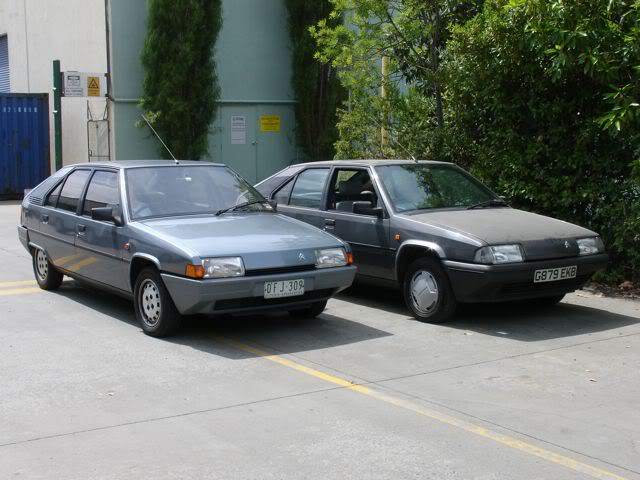 Finally on the road with new Australian plates, at French Car meeting, Melbourne 2007 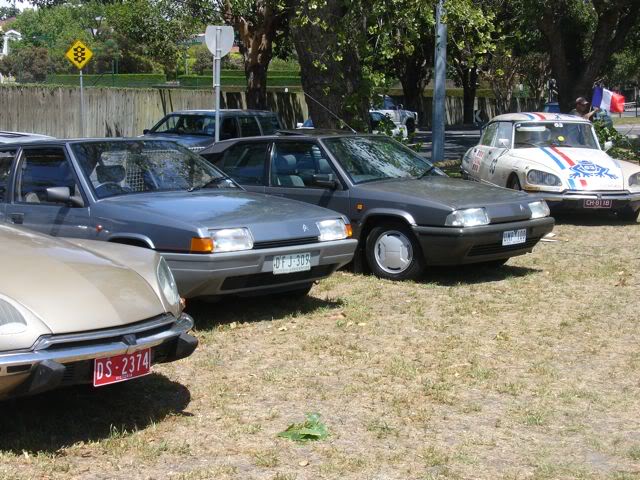 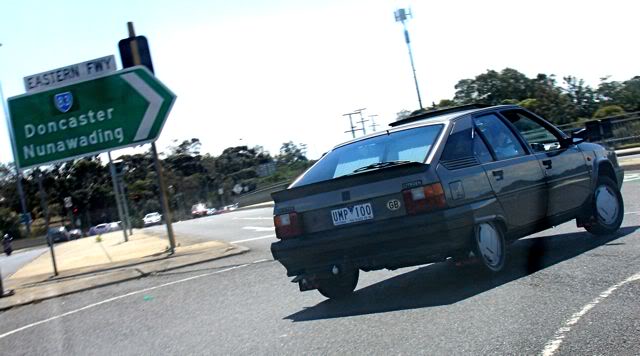 Near Powelltown, Victoria 2007, after a day on the dirt roads. 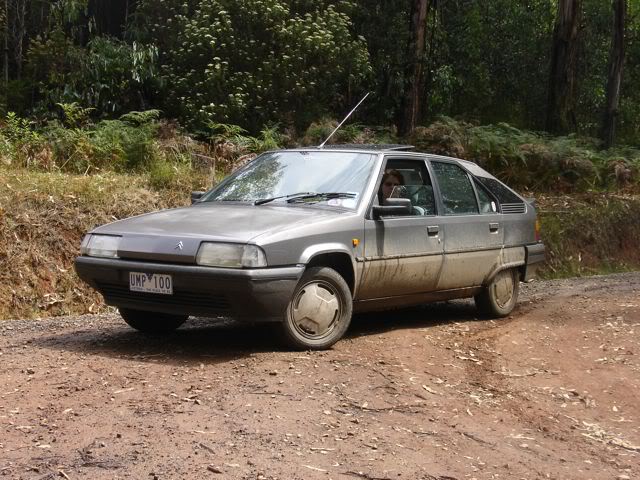 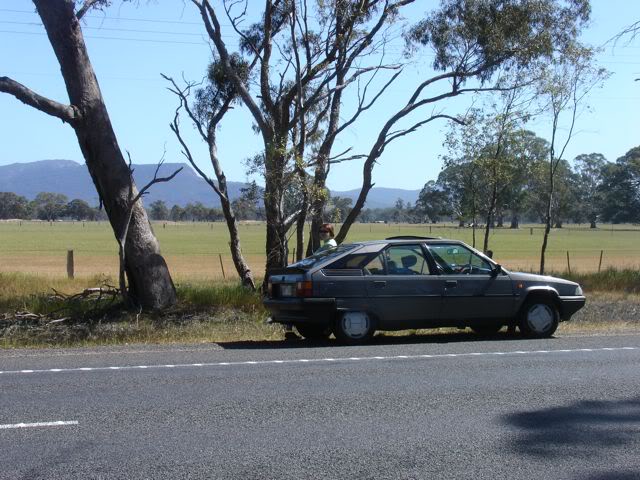 Little Desert, Western Victoria, 2008. Stopped for two Blue Tonged Lizards that were dozing on the road. On that trip I found the fan temperature switch was knackered, but the car only just overheated when the outside temperature was 39C! Shorted it out so fan ran continuously. Only just replaced sensor last month to go to Canberra! 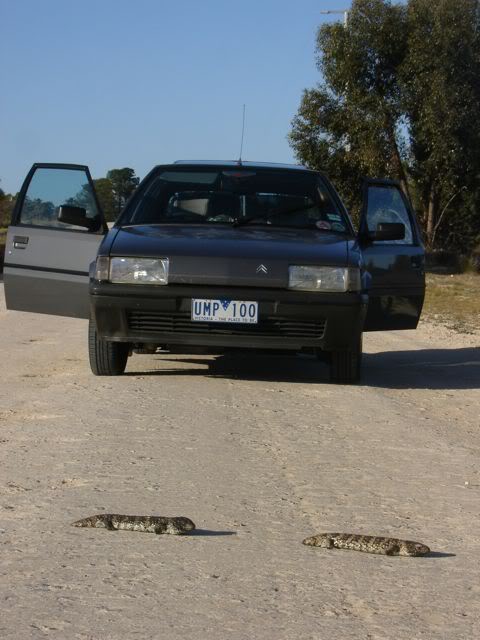 Cheers and long live the BX, thanks to this forum!
Mark

The width of wheels distance they are apart looks like they're playing a version of Lizard "Russian Roulette" where you Run over them both, or just one of them, or neither of them depending upon your driving line.

Bought the car in early 1994 and this was only my second car. After a Mk I Ford Fiesta, this was like getting my hands on a Rolls Royce! Still not quite sure why I opted for the BX. My brother had a Series 1 14 RE and had nothing but expensive trouble, but I had a friend who was a confirmed Citroen nut who had also owned a series 1 and had just bought an XM. I'm not very patient when buying things and decided that the best way to decide on a car was to pick one model and just look at those. And the BX it was!
Mark T.
Melbourne, Australia
BX16 TRS Auto (Series 1)
BX19 TRS (Series 2)
C3 Pluriel
Top

I think I paid 5,500 quid. Four years old with about 70k on the clock - quite high really. Decided then to keep it for a few years to justify the cost. It now has 212,000 miles on the clock, plus one year when the speed was not working. It's not al been plain sailing. Blew a head gasket and split a cylinder liner in about 1998, then just before coming to Australia I had to have a new engine block. A head bolt had split in the old one and could not be drilled out. I could write a book on the things that have happened in UK France and here...
Mark T.
Melbourne, Australia
BX16 TRS Auto (Series 1)
BX19 TRS (Series 2)
C3 Pluriel
Top

Well that's certainly dedication, well done and thanks for sharing.
Whats the tail behind it's stable mate the MK.1?

Yes, over 16 years it has been great value - the car really owes me nothing, which is why I have kept with it. I don't think it wanted to come to Australia though. The day I took it to the shipping company in Manchester (about a week after getting the new engine block) it decided to shed its alternator belt and hydraulic pump belt on the M62. Probably hadn't been tightened up enough. Only just made it to the depot with all red lights on and mud flaps scraping! Had to borrow my wife's car (a lovely C3 XTR we were sad to leave behind) to bomb up to Halfords in Bury to buy new belts (yes they had them both in stock!) and fit them in the car park. Never been quite so stressed as they had to get the car in the container that night.

Regarding the Series 1 - when we came to Australia, it was two months before our container arrived, and we needed another car. Initialy looked at a new C3, but too expensive, so decided to look at another BX or a Xantia and checked out the web. (also looked at 2 DS but they were in poor condition for what we could afford). At that time you could typically find 3 or 4 BXs in Victoria for sale at any one time - now about one or two. This Series 1 came up and was near where I worked, so we went to see it. It was immaculate outside and only slightly worn inside. Full service history and low km. It belonged to another member on this list whose family had run a Citroen dealership in Melbourne and owned several BXs and other Citroens. The car had been well looked after an owned since new. It has run very well since. The great advantage of having two BXs now is that if I start a job on one, it doesn't have to be back together to get me to work on Monday! e.g. the Series 2 was off the road for a few months recently after the push rod on one of the rear suspension cylinders fractured (while my parents were driving it...) and I decided to give the rear end an overhaul. The offending item is shown below (is this an uncommon failure?). Should post this question on the technical forum too. 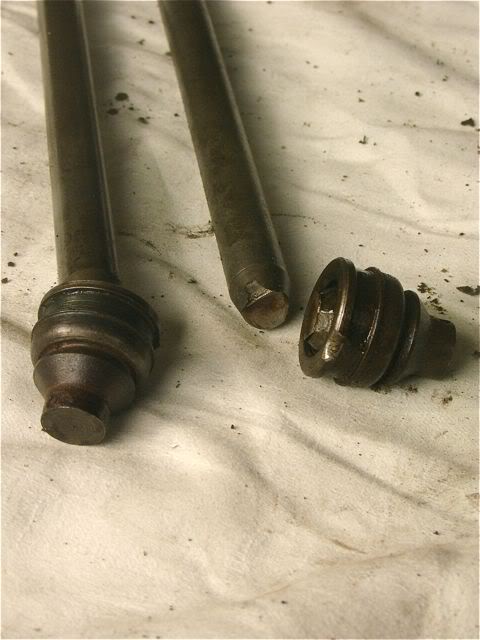 1 'Halfords Bury carpark' My BX has been there many times, 2 miles down the road from me.(Radcliffe)

2 I was changing my rear arm bearings yesterday and one of the rods fell out whilst putting the arm back in. As I replaced the rod I thought how weak the knuckle end looked and wondered if they ever snapped.
Kevan
1987 Citroen BX MK1 diesel estate.(Currently in dry storage)
1997 Mercedes C230 W202 - daily driver.
2010 BMW X1 SE 2.0D Auto - Her indoors daily driver.
2003 Land Rover Discovery Series 2 Facelift TD5 - Daily driver / hobby days and camping.
1993 Land Rover Discovery 200tdi Series 1 3 door - in need of TLC
Top

Not the only one there Mark!

Although it is more normal (in this country at least) for the cylinders to fail through the aluminium wall corroding through.

One last pair of photos for now on my nostalgia trip. Dug out some photos from July 1994, just after I bought the car. The first one here shows it parked opposite our holiday cottage in a small village in the Lot valley, southern France, parked next to a friend's XM - we were on holiday together. We have both since moved to Australia, taking our cars, and our families still meet up regularly - the second photo is the same two cars, now on Australian plates, taken yesterday (easter Sunday) after a group picnic in the Dandenong hills, East of Melbourne. 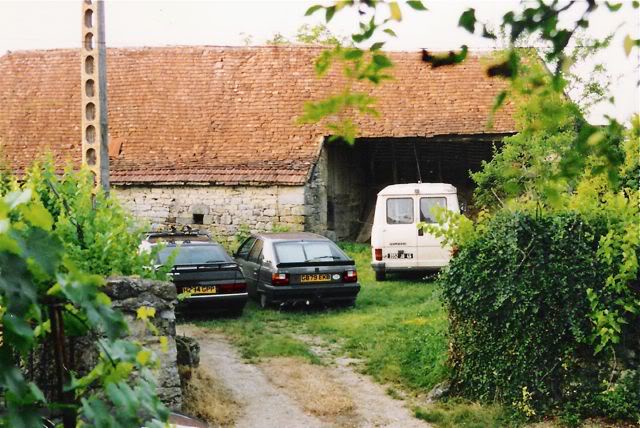 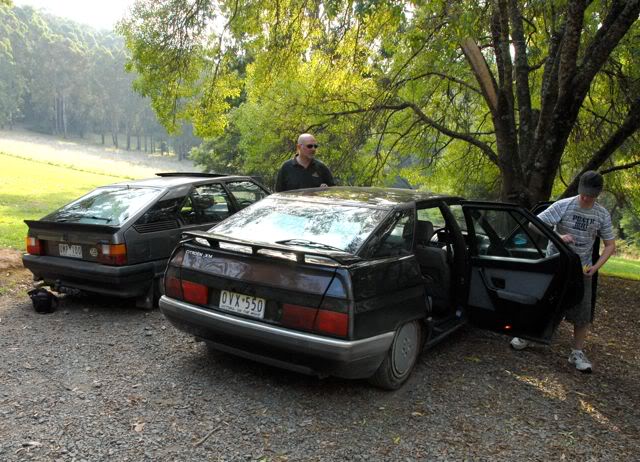 Your ph1 bx has set up a new hankering in my heart. They look even more Citroeny than the ph2. I like the 'spaceship' dash in the older ones too.

I agree that there is something I really like about the S1's in all Citroens... I have a late S2 XM, which although improved in some areas just doesn't have the looks of the S1 - it's generic by comparison. My CX is a S1 though

Nice to see pics of a BX and XM together - I'd wondered what they'd look like together.
Ray