Tell us about life with your BX, or indeed life in general!
Messages: 3 • Page 1 of 1

Having owned a Rendezvous from 1996 to 2003 I decided last year that I desperately needed another BX.

My rendezvous was a cracking little car, my mum bought it new back in 1991, she decided against the St Tropez as the name made her think it would be "Stroppy" sad but true, even sadder is the fact that whilst just over a month old the rendezvous did indeed "rendezvous" with the side of a truck

Anyway a few repairs later and she was back on the road and in 1995 she was given to my younger sister, after a year of abuse and being driven into walls I paid my little sis the princely sum of £1650 and she was finally mine all mine and what a great car she was, in my 7 years of ownership very little went wrong and I regret to this day letting her go as my father-in-law had just bought us a 3 year old scenic (possibly the world's worst car ever GRRRR)

Roll on 2009 and we've loosely agreed that we could do with a 2nd car, but it has to be cheap to run and cheap to insure in my name, parked on a street in manchester. After much research (mostly of the BX and a little on other cars for comparison) I logged on to this site and purchased my lovely little K plate 1.7TXD. One incredibly long train journey to Cardiff later (well I did have a 2 year old and a 4 year old with me lol ) and I finally drove her home. It was, quite frankly, a terrifying experience, I was used to driving an imported automatic bus, suddenly I'm so low down corsas looked like zafiras, I have to remember to move that funny stick in the middle whilst simultaneously pressing down a pedal on my left and the indicators are on the "wrong" side

Thankfully I was used to this before I completed my 180 mile drive home, which I have to say the car handled superbly

Almost immediately I sprung a leak on the n/s front, with help from this site I was able to identify it as coming from my front strut return pipe and replace it (to be fair I did have a little help getting the wheel off, but then I'm only little). Excellent!!!!

Just before christmas 2009 I sprung a leak at the front, circled in the picture below 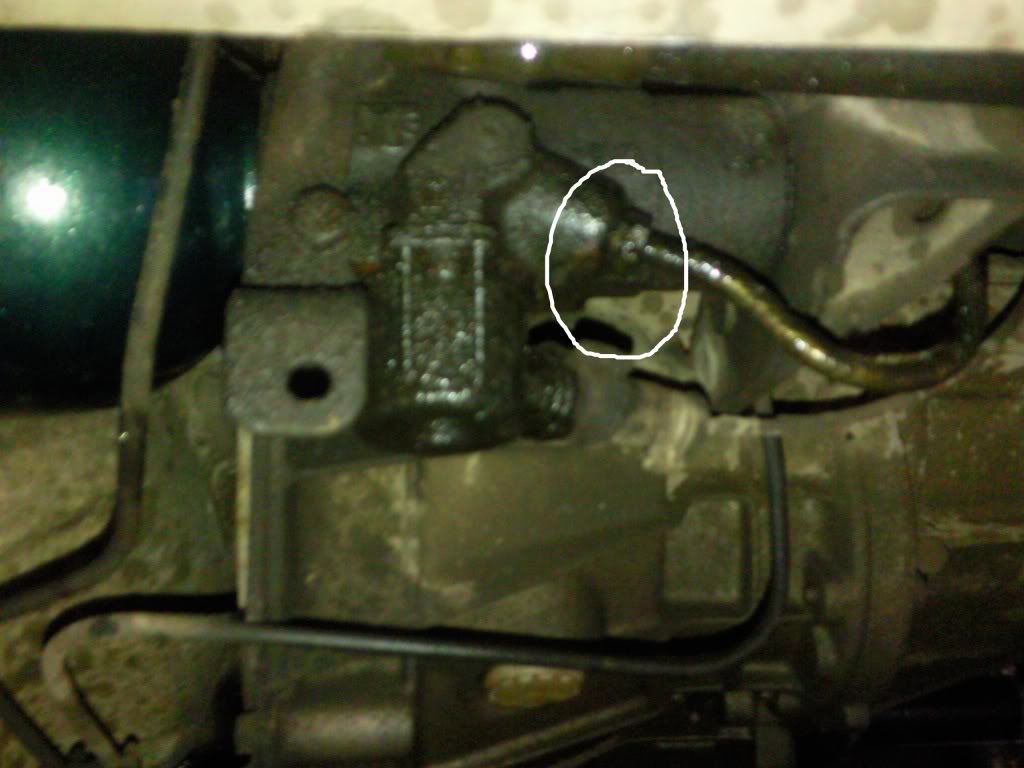 After discussing it on this site and with the lovely bloke at westroen a conclusion was reached that it was a split pipe, oh well I thought I have plenty of spare bits lets see what I have. Quick check of the spares later and I thought I had the part I needed. Then the snow came and it was 6 weeks before I got round to doing anymore. Finally all was clear, after about half an hour I got her up on ramps (I was so proud of this small achievement I took a pic to text my hubby at work ) 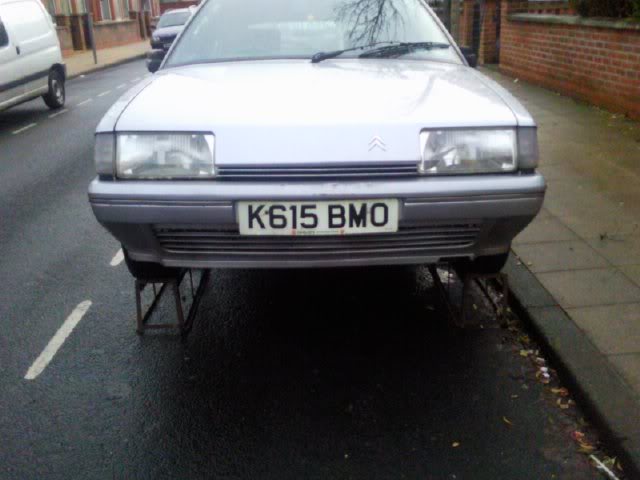 I then set to work, de-pressurised the system and everything, sadly I discovered that I did not actually have a spare pipe, happily the problem was a loose nut all along - yes I did feel like a complete numpty but you live and learn

All was well for a couple of months, then I sprung a leak o/s front - you guessed it, my other return strut pipe thingy - at least they're easy!!!

That sorted I motored on until June when I sprung a mysterious leak at the front, it was obviously dripping down through the hole near the LHM tank on to bodywork then the floor, but where was it coming from. First job clean up under the bonnet so that leaks are visible, I had great fun chasing the local kids round with hands full of unspecified gloop. Anyway whilst cleaning up I discovered that at least one of the pipes on the top of the tank was very loose indeed, it just fell off when I knocked it, so I cleaned up, reseated the pipes and the leak has now gone - Yippee!!!!!

All seems to be well for now, or it will be when I get off here and replace my n/s/f strut return pipe again - this time with a genuine citroen part

I do love nice cheap fixes myself, my 16TRS started dumping LHM everywhere not long ago, it turned out one of the rrtuen pipes had split, I cut the end off and stuck it back together an hay presto leak fixed, for the price of nowt.

Welcome to the club Sarah, and good look with the BX.
Lots of Motors, mostly semi broken....
Top

That was the one I was going to buy - I still regret backing out at the last minute but Cardiff was too far at the time. I'd even bought the train ticket.