In the Wild West

Tell us about BXs you have spotted on the road, or BXs/parts spotted for sale including eBay finds.
Messages: 86

Sadly the Gs i fear may break its back trying to remove it from the earth.My Dad had a Peugeot 404 pickup sat on a gravel drive which i was asked to move when the sold the house.Sadly it quite literally broke in too half way down the road and only the bodywork panels pressing on the pickup part as it sagged kept things together.It looked quite reasonable as well .Just imagine hooking a tow rope onto the front of that GS and giving it a tug?The red BX Gt is wheel less and actually sat on the ground as well.God only knows whats going on under there?
Its exciting to see them all but also really sad at the same time that they have just been left to dissolve.
Richard.
1985 MK1 BX Digit
1986 MK1 BX Leader
1988 19RD
1983 Tin Snail
Top

I think as mulley says this is a long term venture as the remaining BX's fade into dust any MK1 estate or hatch will be very sort after in 10/15 years time.
I would like to add myself that the rarety of MK1 interior trim parts etc;-
Would alone make a salvage trip a thing that must happen.
If as a bonus a MK1 is in a viable condition then it would be all worth it.
This is my own opinion and as my hands are full at the moment after my Green Hornet ACCIDENT
If it goes ahead next year when the Green Hornet is back to form i will be counting myself in on the rescue.

My Dad had a Peugeot 404 pickup sat on a gravel drive which i was asked to move when the sold the house.Sadly it quite literally broke in too half way down the road and only the bodywork panels pressing on the pickup part as it sagged kept things together

When my parents 1st moved to Ireland they found a ford popular (one of the later, square bodied ones) in the back garden, in grass that was taller than it was. Although rusty it looked ok until they put a chain round the back axle to drag it out. Not only did the axle pull straight out from underneath with some of the boot floor, but the whole thing collapsed to the side, leaving than with a flat pack car with an engine sticking out the front

I love vans, and have probably had more vans than cars over the years

If I can't get my hands on a GS van, are there any BX ones out there tht need rescuing

Now's the time - the weather's perfect!

that is all.
Smokes lots, because enough's enough already!

The owner of all these cars is a mate of mine. The Mk1 GT once belonged to us - lovely car. I was involved in the acquisition of the Mk1 estate back in 2004 - about £250.00 off eBay from High Wycombe if I recall correctly.

Heres a picture of it after acquisition on our front lawn

Ooops, lets try that again. And, folks, also on display are my RHD GS van in the garage and the RHD BX van... plus rear end of a CX Pallas Mk1... ah, those were the days... 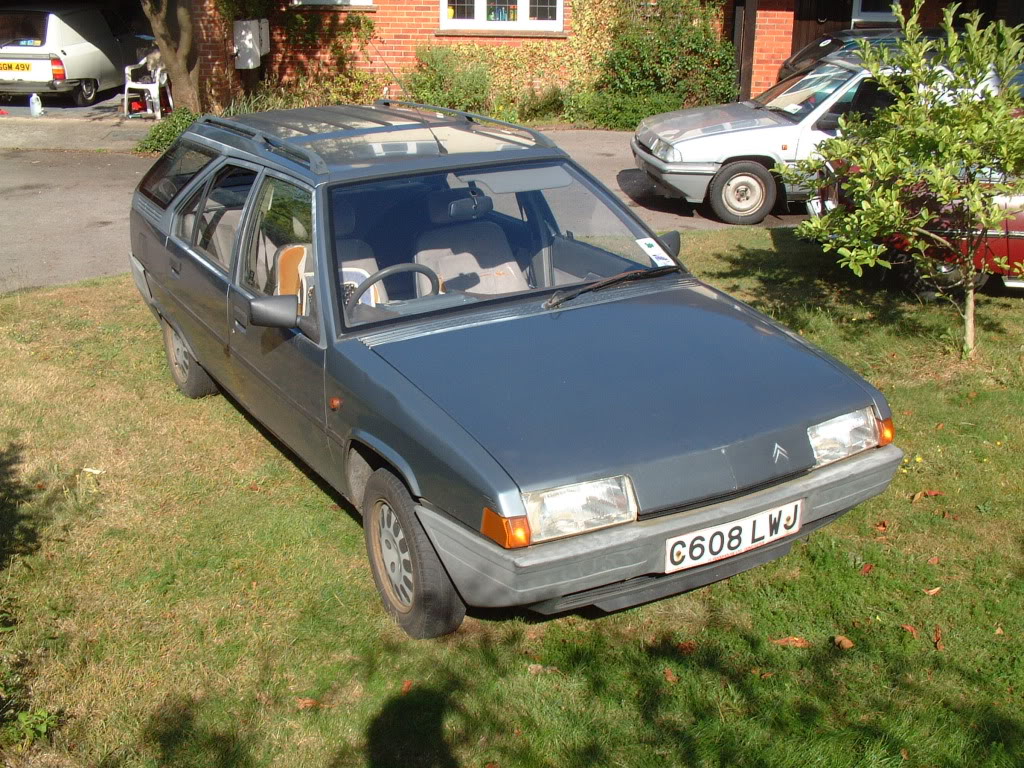 Nice picture. It's a shame that the estate - and the others - have been left to rot in that field. Judging by the condition of that driver's seat that estate had a hard life - though that nylon stuff wasn't the best.
Knowing the state that my Mk.1 estate is in, I'm sure that one needed a bit of TLC too!

What's your mate's position on these cars now Eric?
Todd

Why buy them then leave them to rot away? doesnt make sense, unless its a "I will restore them all one day" scenario which is all too common.
Last edited by Tim Leech on Sun Jan 16, 2011 9:35 am, edited 1 time in total.
Lots of Motors, mostly semi broken....
Top

I guess people just think that they'll fix them one day, & the years just roll by & before you know it they are rusted to buggery & then its too late

I wonder just how many Projects never get started/finished and are still sat in fields or lockups/garages up and down the country.Just a quick flick through the classics on Ebay shows loads of unfinished or abandoned projects due to lack of time or money etc.
Just such a shame to see them sat rotting like this.
Richard.
1985 MK1 BX Digit
1986 MK1 BX Leader
1988 19RD
1983 Tin Snail
Top

Just such a shame to see them sat rotting like this.

I couldn't agree more, although I have several long term residents at the 'Sims Home for unloved Citroens & Cycles'. At least mine are under cover & secure!

I wonder what's the longest time something has been awaiting restoration or being restored for? I'll kick off with my F7 which has been in it's current lock up since my Mum put it there in 1978! between then and 1989 it has had the rear of the body replaced, the wings & bonnet painted, an engine and gearbox built up for it and the front suspension & steering stripped & rebuilt. At least she managed more than the previous owner, who failed to do any of the repair work that he took it off the road to do in 1962