Anything about BXs
Messages: 159

Not sure any exist now - it was a while ago! Maybe it's time for the club to have some made? I can provide artwork of course (but Paul has a nice sense of what needs doing - I understood a site redesign/logotype was being done??)...

Ill be up for some and happy to chuck some money into the pot..
Lots of Motors, mostly semi broken....
Top

I've got an unused one if Phil needs it as a reference.
Mark Smith

I too would be up for more as i keep collecting more BXs.

I can gather together the original artwork for the one you have Mark, I think: It's the white large lettering flanked by red block chevrons I'm guessing. That lettering was drawn from original Citroen lettering so is still a good choice.

I can't get the stickers made as the company aren't here anymore so will have to ask someone else here to sort it. Sorry. As it is I've got to try to find a good place for the Challenge plaques.
• 1992 Citroen BX TZD Turbo Hurricane
• 2006 Xsara Picasso 1.6 16v
Top

Philip Chidlow wrote:Not sure any exist now - it was a while ago! Maybe it's time for the club to have some made? I can provide artwork of course (but Paul has a nice sense of what needs doing - I understood a site redesign/logotype was being done??)...


Sent from my iPhone using Tapatalk

I'll have a word with Sandre about what we have in club funds (after the NEC it's probably a beer bottle top and a fag packet), then I'll post up some sticker designs and let folks decide which one looks best. I'm halfway through a 'corporate makeover' ready for a new website to run alongside the forum, but we got rather stitched up by the last web designer and we're back to square one. As it happens I spoke to another web designer today who has agreed to help with the whole thing for a very reasonable sum, though again I need to see Sandre about what funds are available - watch this space I'm on the case.

P.S. Just saw your post Phil - shall we just do a re-run of the old sticker? Below are the designs I used for all the NEC material. 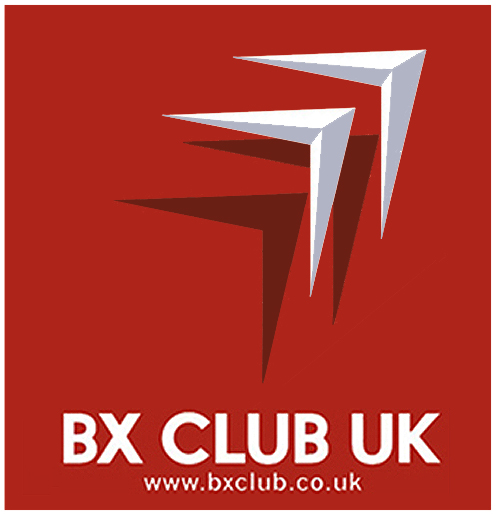 Ok I'm excited now! Lol
If its a funds thing am happy to put some money in the pot in advance if this helps

If everyone's agreeable I'll try and find a sticker making place and get a costing for a batch - I'll get an equal amount of each one made up and flog them as a set - how does that sound?
Top

If we go with a new design, does that mean that my old one will be worth some money?

mds141 wrote:If we go with a new design, does that mean that my old one will be worth some money?

Put me down for stickers and if possible money into the pot too, just let me know how

Okee dokee - I've had a word with Sandre and there is a couple of bob in the club funds (but only a couple of bob). I've just submitted the details of the stickers to an organisation called 'solopress' and they're going to get back to me with a price this afternoon.

What follows is a general 'begging letter' message. If anyone would like to make a contribution to club funds the paypal address is: bxclubuk@gmail.co.uk

In order for the club to expand and actually do things, we do need a bit of dosh (not a great deal - but some). I've recently had a quote of £200 to set up a new website, plus we also need to renew our public liability insurance and purchase promotional material for club events, rallies and the NEC. A suggested donation would be £15, but that's in no way a prescription - a couple of quid is fine but then so is . . . substantially more (!) - it's up to you. I think I speak for everyone when I say that I'd much prefer the club to run on a goodwill basis rather than the introduction of a subscription with the inevitable political rubbish that follows on. Having said that, we do need 'goodwill' to make the club a viable and nationally visible set-up and give the BX the kind of profile I'm sure we all think it deserves.

I'm willing to chip in a fair amount to make the website happen: I think a central hub for info, pics, event reports, brochure downloads etc. that can't be accommodated by the forum is really important, if you agree see above re: 'goodwill'!

Anyway, it's up to all of us what kind of club we want to make it, and whether the BX remains a forlorn banger bargain or shiny and respected member of the classic car community (bit of emotional blackmail there). So there you have it - basically, put your hand in your pocket you tight wads!