Anything about BXs
Messages: 33

mat_fenwick wrote:It's Xac who hosts the site, so would be best to contact him direct as me and Doc don't have FTP access to the website. With the missing links, I pointed out about this a couple of weeks back and got the following response:


Sorted, though not happy, loads of ASP pages when HTML would have done.
Can someone get back to me ASAP with a list of the links down the side of the page (www.bxclub.co.uk) which can be disabled?
I had to create a new application for each one.

That doesn't actually mean much to me (my HTML knowledge extends to fairly simple text pages only), but I guess it means that because of theway it was previously written, updating things is more difficult. Hopefully means more to you Matt and Phil!

I think it would be great if we had a more up to date front page, and equally importantly, easily updateable by active forum members.

I was having a play last night... It would probably take a couple of weeks to get the current one up to scratch, and more long-term we could install a simple CMS to give active members easy access to update the site and stuff.
Top


Todd's TRD Mk1 is pretty legendary in my book, especially with the lovely accessories it wears.

Why, thankyou. It's just been parked in the corner of the barn where it will probably sit for a couple of years awaiting its restoration to hopefully attain its 'historical status' at aged 30, which would make it viable to run here in Germany. Tax would go down from a ridiculous €525 a year to €180 and I could drive it anywhere - currently I can't go into almost any city because of emissions controls.
The mileage when I bought it was 40,000 and now it stands at 60,000 miles, though being driven through two winters hasn't helped its condition, nor bashing into the side of the entrance to the barn

As for the rear louvres, it is not an original Citroen part but an aftermarket item that was in the boot when I took delivery. I bought it unseen from Ebay and it came here on a truck from the north of Germany. I knew it was in good condition and was cheap because of a blown head gasket but I didn't know that it had every conceivable accessory available in 1985 and the condition was really outstanding, having been cosseted and garaged by a Grandad and Citroen maintained.

I have subsequently acquired two more louvres - original Citroen ones, new with mounting kits but these have to be drilled into the tailgate. One I want to fit to my 16v but that involves removing the spoiler, the other I probably would sell if anyone really wants it and the price was right, plus the postage from Germany would be a consideration. I've never seen Citroen louvres anywhere, only the after-market variety..

Anyway, any excuse, sunrise at Stratford 2009: 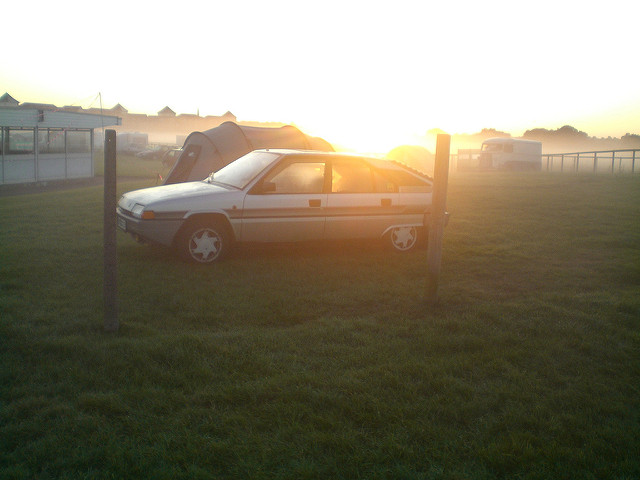 I will be headed over to Germany/swizterland later on in the year, so shipping should be sweet-i can chuck it into an exhibition i am packing out. Pm me whatyou want for the louvres! I have the P2 valver, but am keen for an 80s style Bx later on!
one thing better than owning a 16v-owning TWO 16vs
Top
Messages: 33