This is the pipe I need to replace... Does anybody know what it is? 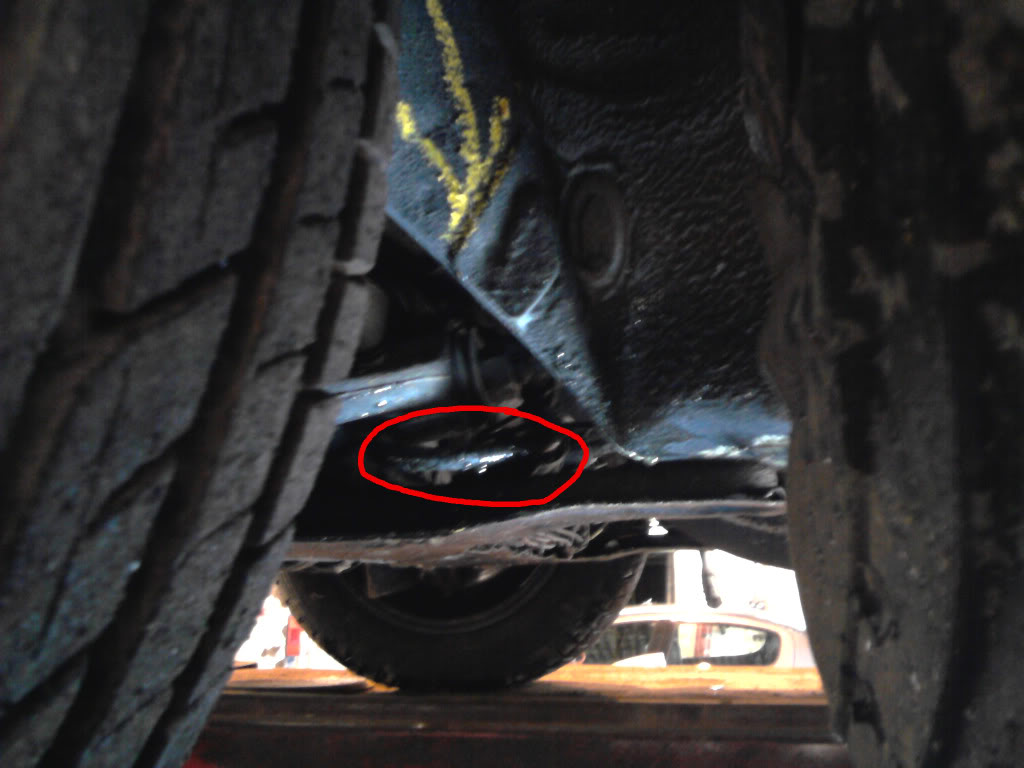 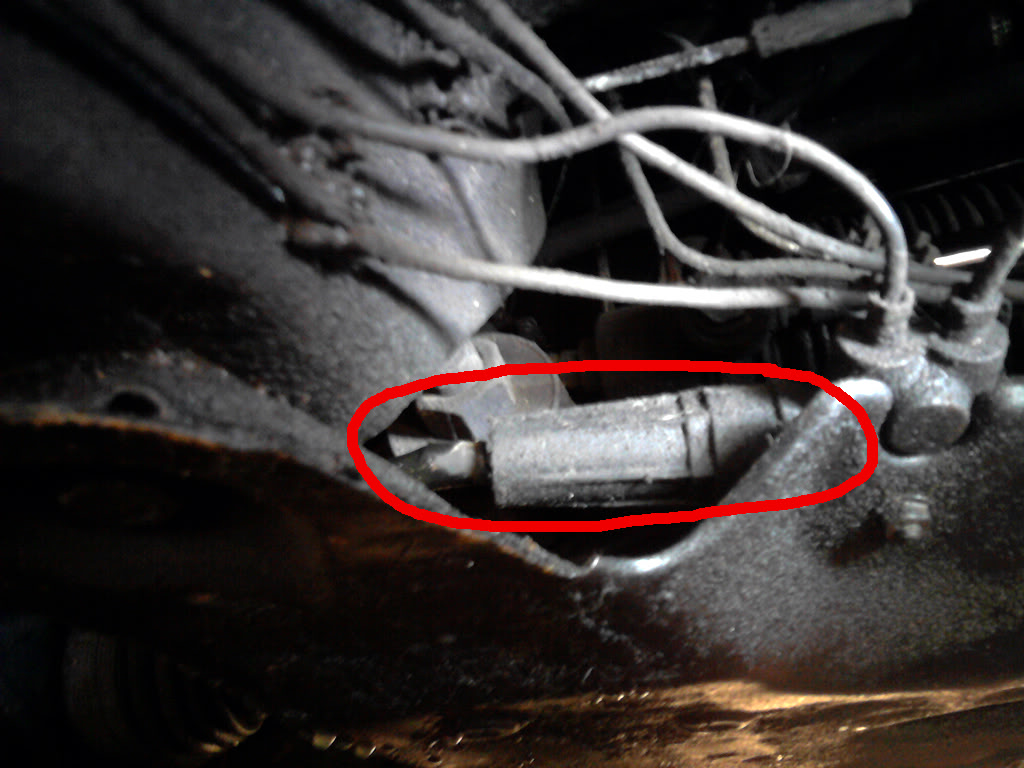 Result, yes its a fail but nothing major!

Two Gandini masterpieces along side each other 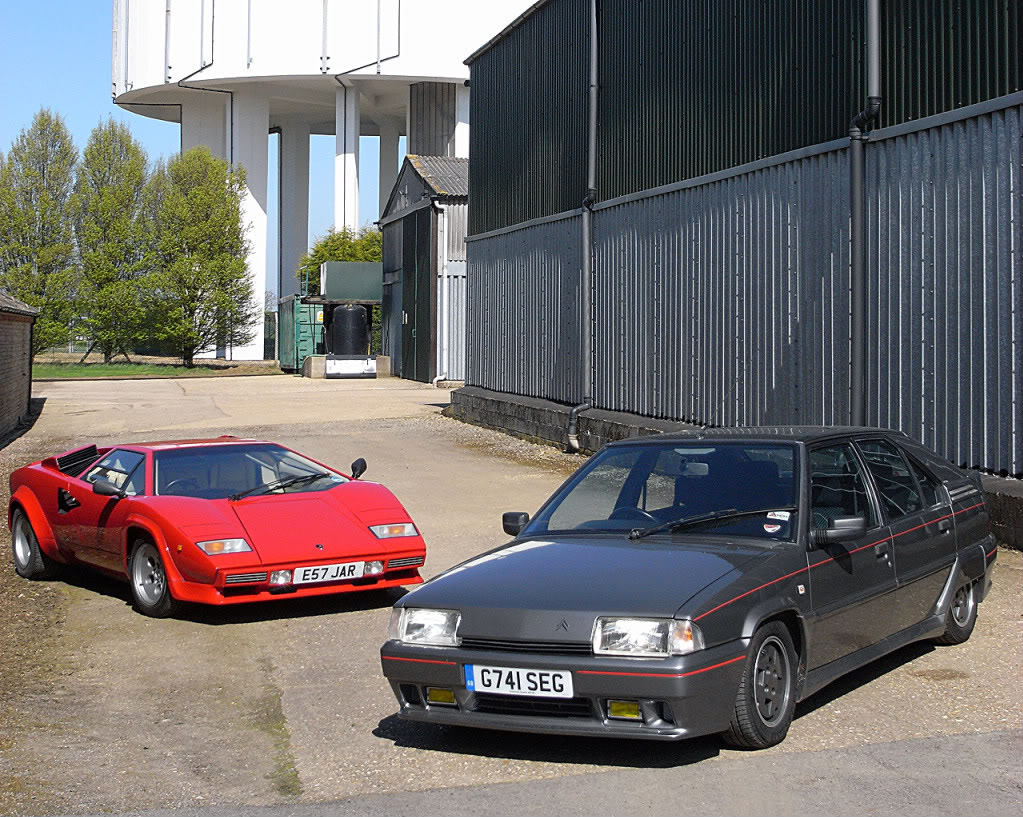 I've wanted to take this pic for about 15 years

Today I got the chance!
Top

Gandini penned some fabulous looking cars, no doubt of that.

I've already added this to my "wallpaper" folder. Thanks Matt

A couple of small updates:

The white 16v is now fully legal (or it will be when I tax it at the start of next month) and I'll hopefully be giving it a bit of attention this weekend. It's not running particularly well at the minute, but I've chopped and changed so many bits on that car's ignition system that It could be anything.

The grey 16v left me stranded on the way to work a couple of weeks back... The engine cut out at a set of traffic lights, and I had all sorts of nightmares as to what it was. I had a play under the bonnet, but couldn't work out what the problem was. I called the AA, and the coil was suspected, but we couldn't be sure without checking. He drove me to my house where I picked up a few spares, which were procured during the hellish time diagnosing the problems with the above white car... Which was also a suspected coil when it first died

But this time it really was just a coil!

Spare coil was fitted, but unfortunately my spare (new in box from GSF) didn't come with the brackets to mount it to the inlet manifold

I tried removing the old bracket from the (original Citroen by the look of it) coil, but it was the wrong shape for the new coil. I ordered a new coil off ebay, with the bracket, and will keep the GSF one as an emergency spare.

), my Dad managed to find a buyer for my very early Mk1 AX GT... which has been sat around not doing anything due to my lack of enthusiasm for fixing the heater matrix, and the fact that I have a BX 16v. It is an absolute hoot to drive, and steers like nothing else, but the BX is a much more special thing to own.

Something tells me I'm going to miss it though

... Also quite a funny thread on the evo forum:

Chris Harris is buying my AX... Sold over Twitter

I thought it was about time I took the BX for a nice long run, and what better excuse than to drop off a couple of parts to Mat Fenwick... And have a quick look at his very nice 205 GTi while I was there

A fairly straight forward run, with a mix of motorway, fast A-roads and sheep-lined twisting B-roads. I tried to get off the A5 as quickly as possible, and take some slightly more interesting roads. Mat suggested the A4212 and B4391, so with that in mind I programmed the sat-nav and followed his route. The first 100 miles or so flew by, and the rather nice Alpine head-unit I fitted took the edge off the monotonous 'SPECS camera' sections of the M6. 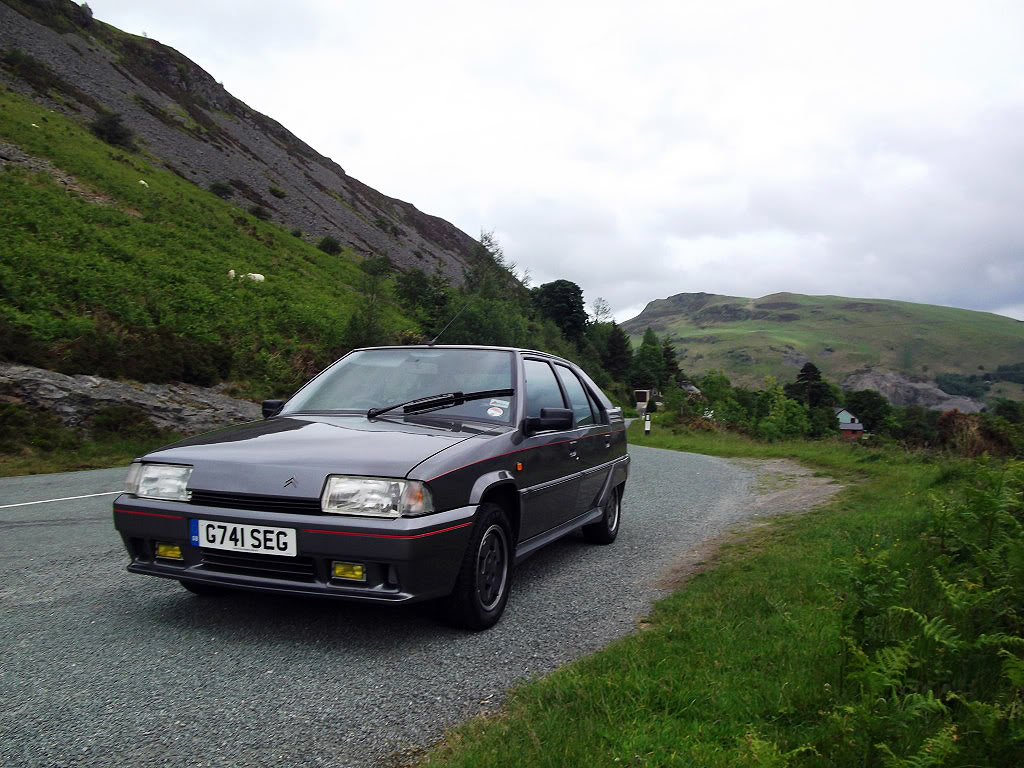 After a short stint on the A5, I entered the first section of the B4391. The first five miles were frustrating, spoiled by a fuel tanker navigating the narrow lanes at little more than walking speed (well it felt like that!). If the road had been a bit wider, I could have easily got round him, but thankfully, he pulled over when he had chance, letting me and the increasing queue of cars behind through. Having been aggressively tailgated by a Peugeot 206 through the next town, I took the opportunity to open the taps properly, for the first time. The ugly Pug quickly vanished from my mirrors and the car settled into a nice 60mph rhythm. Just as I breathed a huge sigh of relief, finally enjoying the empty road that stretched out ahead, I almost wanted to cry when a rather large, and very slow moving bus pulled out... 'Will this madness ever end?' 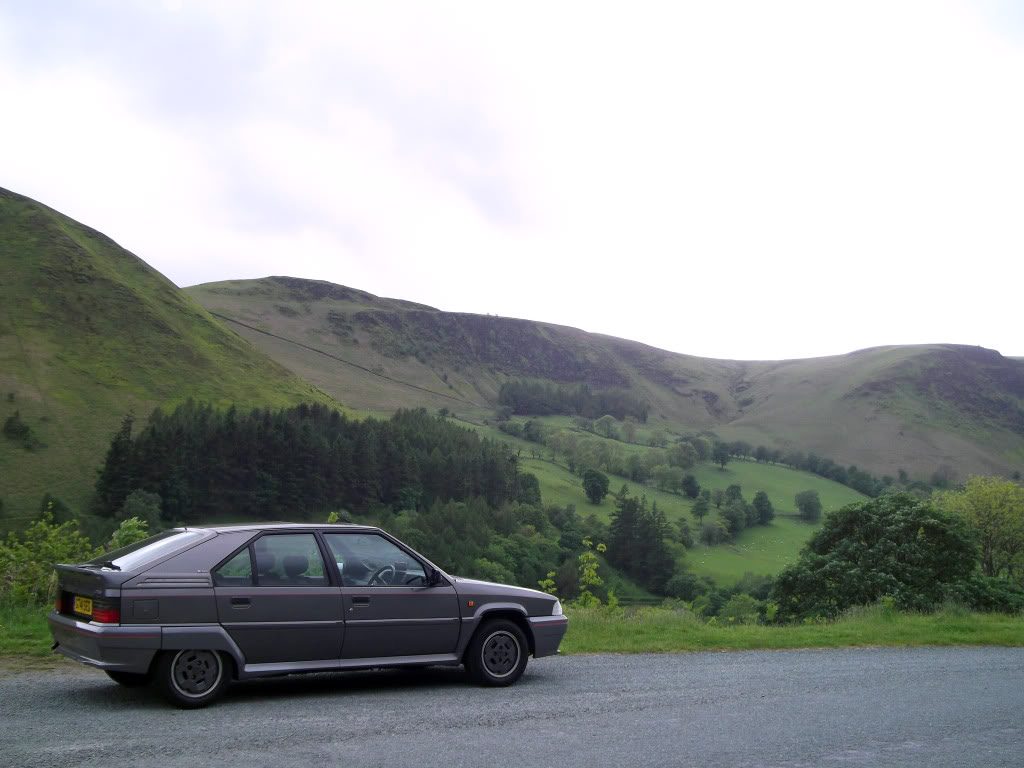 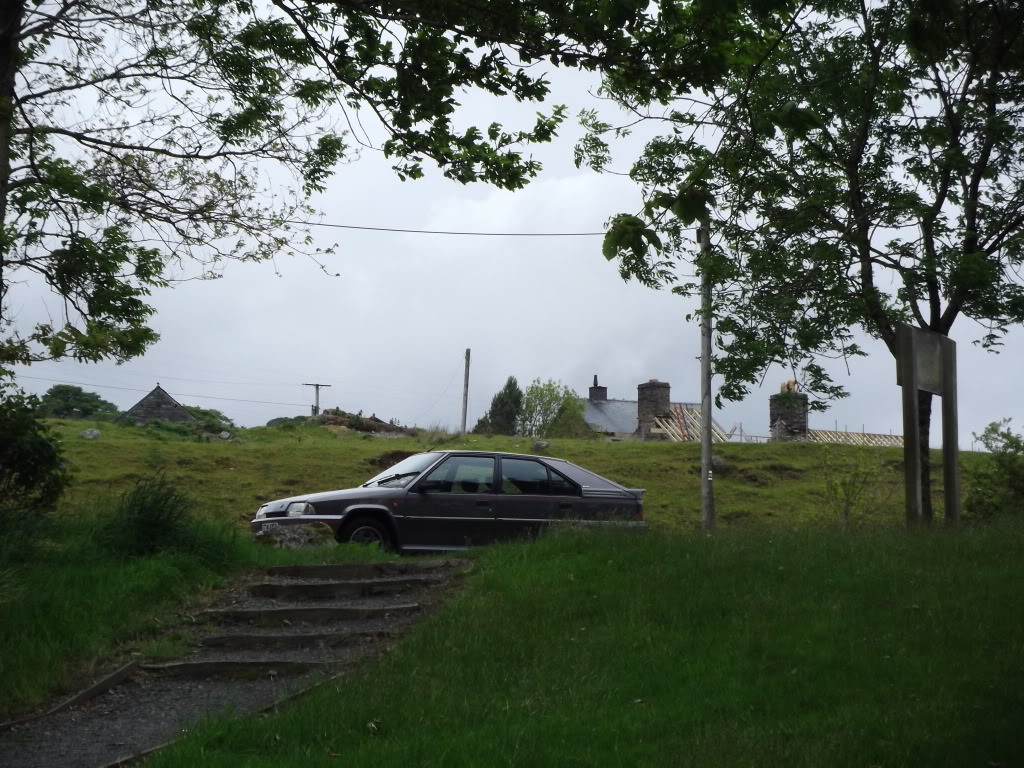 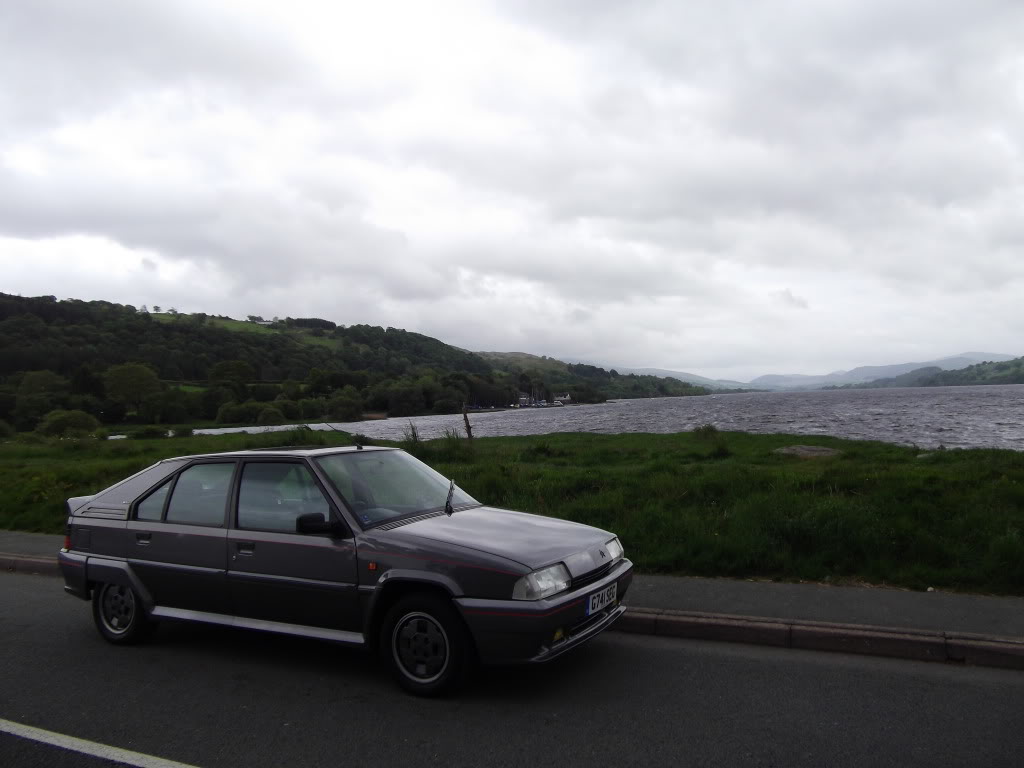 Well, it did end. The road became a lot more hilly, and all but a few cars disappeared. By this point the BX had really come into its own - the steep hills weren't really a bother for the 16v engine, the handling is top-class, the ride is firm by Citroen standards, but still supple enough to deal take on the lumpy Welsh roads without even breaking a sweat. The steering is nicely weighted, providing just enough feedback... But it's the brakes that really blew me away. They inspire so much confidence, you can really lean on them. They didn't suffer from fade, having given them some serious punishment, but were just starting to smell a bit when I arrived.

Although I've frequented this forum for nearly four years, I'd never actually met Mat (even though I'm sure we were both at the 2009 National??), but I had gathered that he was a nice enough chap who has helped me out in the past with various BX things... Well, it was nice to meet you at last, and thanks for the hospitality!

), looking under the bonnet and pretending to know what I was talking about, I think I might have found my next car... 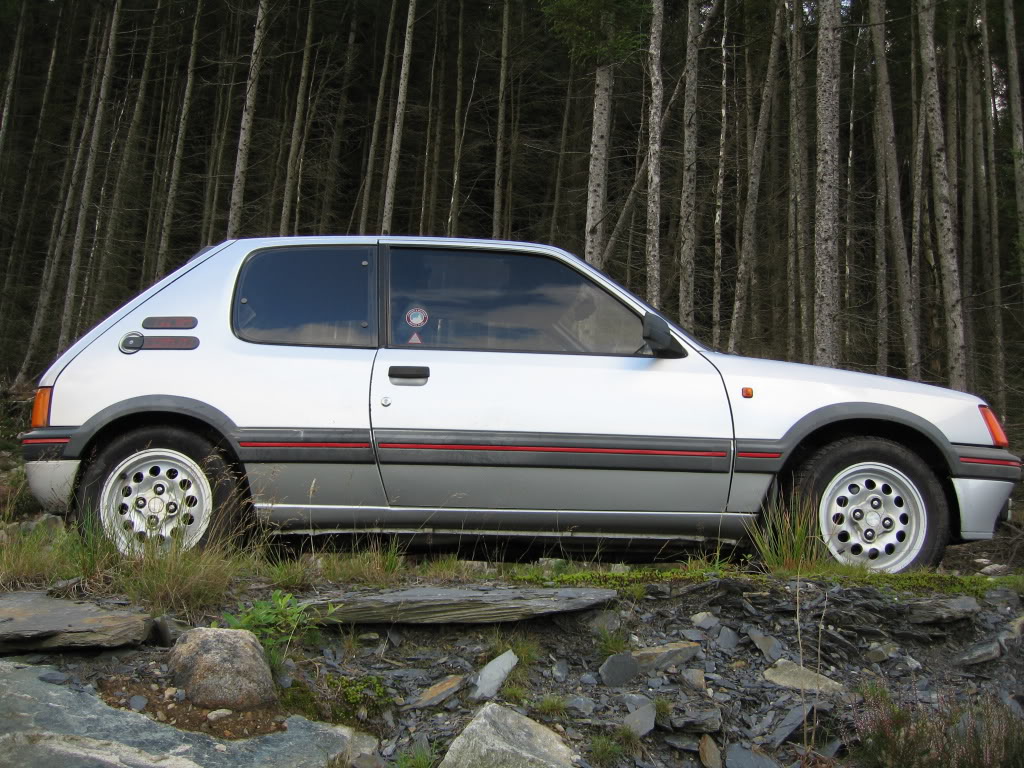 Driving the return leg of the journey was equally as rewarding, but the weather took a slight turn for the worst. 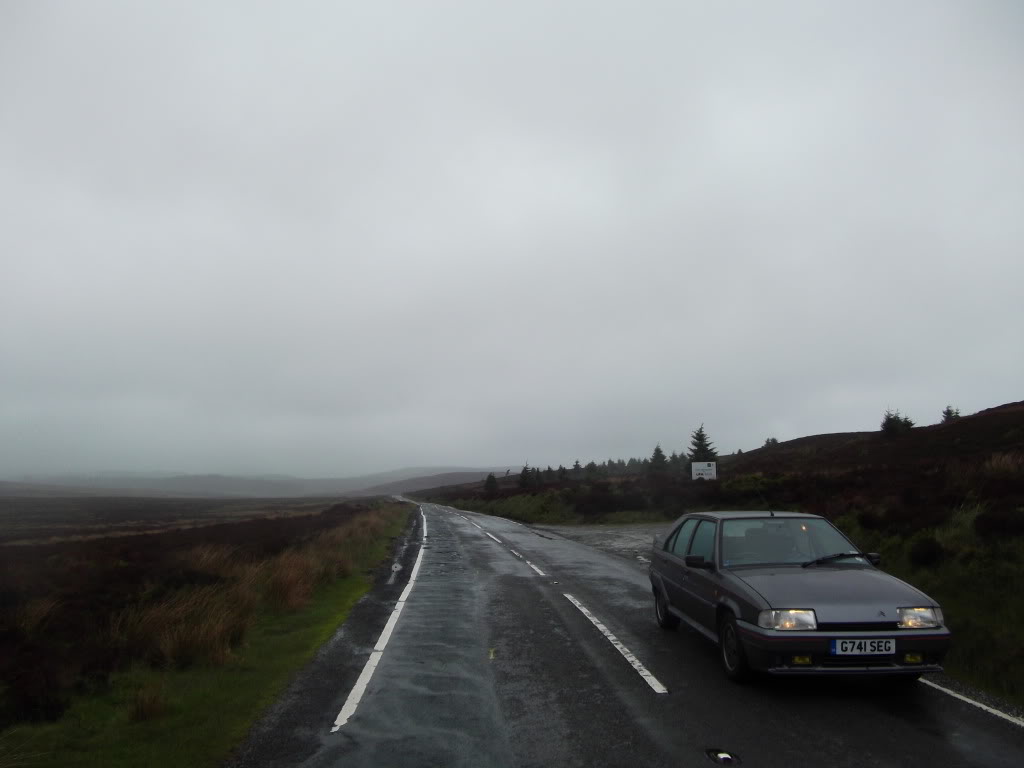 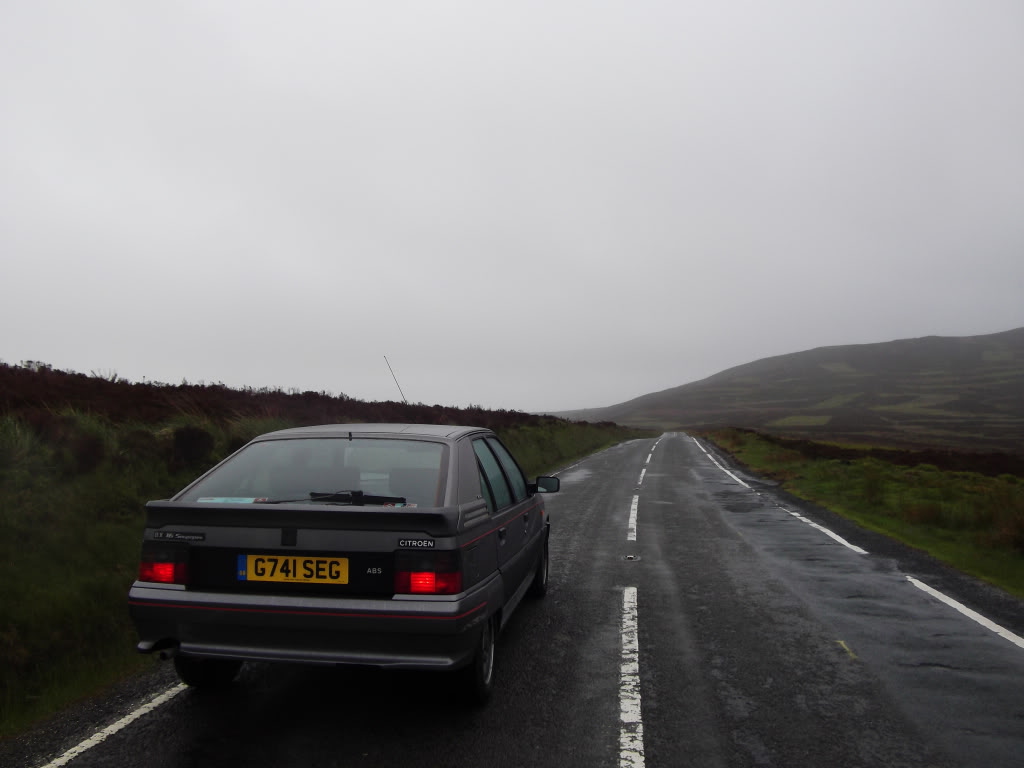 Still it was a nice drive, and really cleared the cobwebs out and gave the valver a damn good thrashing! Now the Phase 1 one is legal again, I fancy giving that a bit of a run. Anybody in the Highlands want some parts delivering?

Looks like a good trip Matt. If you want to deliver your Postert spoiler to Germany then you can give it a proper workout!

Just two weeks ago I was one of those vans blocking the roads out towards Wales but I reckon 'modern' trucks are fast compared to the 15mph up hill speeds the old Merc manages. We always had a great view, couldn't see the huge snake of cars piled up behind us!
Todd

Looks like you had a nice little trip , some nice pics too

Matt H wrote:I had gathered that he was a nice enough chap

If you had seen me yesterday I would have shattered that illusion - I was not a happy bunny!

Was good to meet up and put a face to the name. Cheers for the bits too! I've changed the fuel hose on the 205, and the other bits will be sorted soon(ish!)