... Although if my aim was to make you feel bad I still win

I really wish you hadn't posted that link... Luckily I don't have the cash right now. I think I'd prefer a really early FWD version though. Compared to the BX, in my opinion, what the 405 makes up for in refinement, it loses in character.
Top 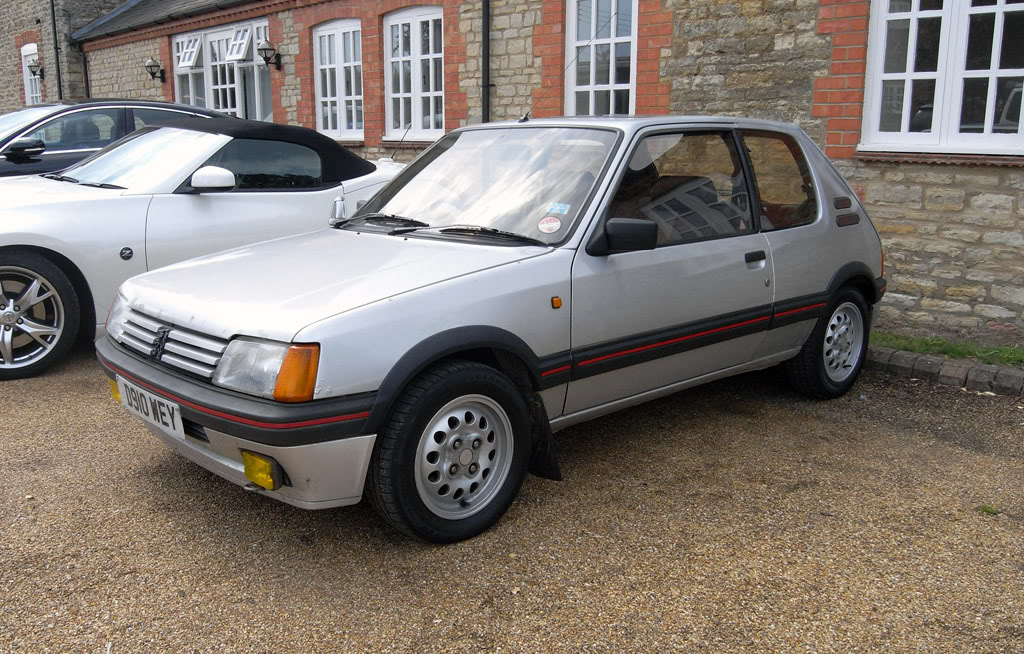 A huge thanks to Mat Fenwick, this is such a great car... Didn't disappoint.

Like the photo! Surely you didn't beat the Chimaera?

course he did , a chimera can't go 1/4 mile without breaking down

Well, I did beat the Chimaera... I think it was his first attempt, but still hilarious

And I fudged a gear change... This was my second slowest run 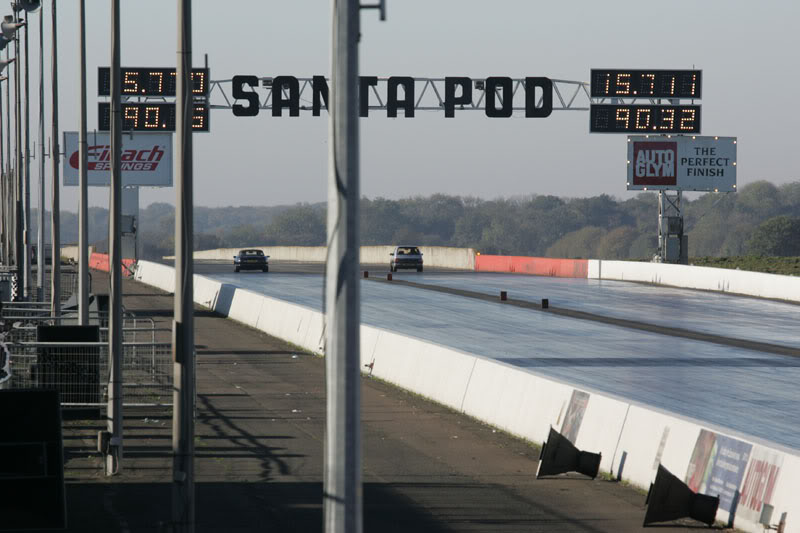 I suppose I should also mention the Pug 205 GTI buying guide that I did in the current (November) issue of Octane Magazine. Go and buy it

I basically said to stay away from home-made 16v or turbo conversions. Do as I say not as I do...

Susan Donym wrote:Matt, we will have to meet at the pod one day and have a head to head

I'm up for it if you are. Feeling pretty confident after Saturday

What a pansy that Chim driver must have been

Mind you, I also pulled 15.69sec @ 95mph in the BX, so seeing as you\'re a couple of hundred kilos down you should really be showing me the ropes, not the other way around.

I'm getting the white BX back next weekend, and to be honest, the engine in that one feels a fair bit stronger than the one in the 205... Would love to give that one a go, although I doubt it would be as quick as yours.

There was a guy there running a 205 with a GTI-6 engine, and I was consistently faster on every run. He was a bit miffed to say the least...

And yes. The guy in the TVR was a real pansy, but it makes a good picture. It was funny watching it head up the strip with its rear lights flickering off when it hit about 4000rpm. I really do love 'em though 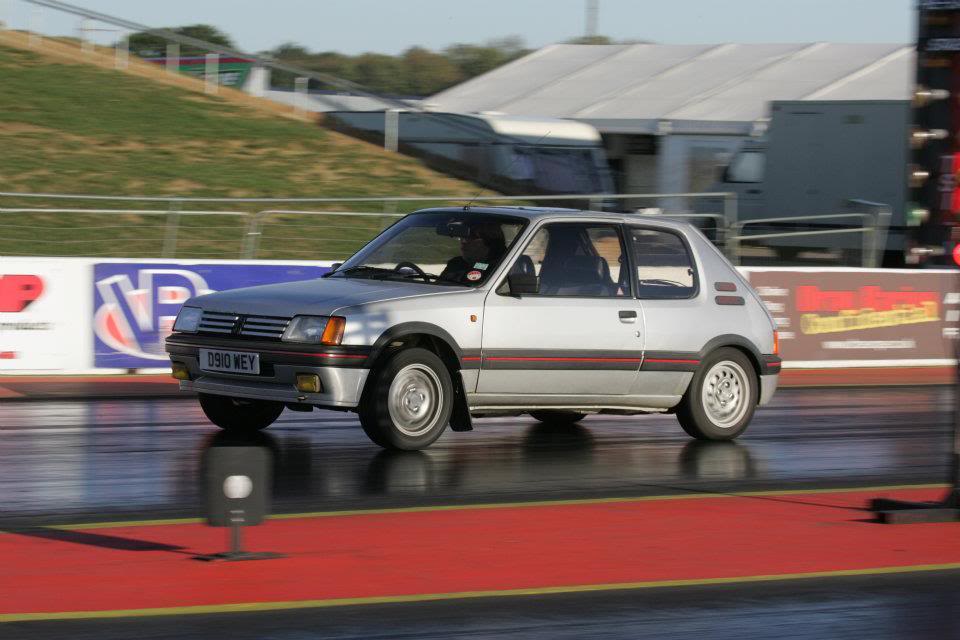 Some piccies from the weekend... Went to see Mat Fenwick to pick up my white 16v. The train journey up involved no less than six different trains. 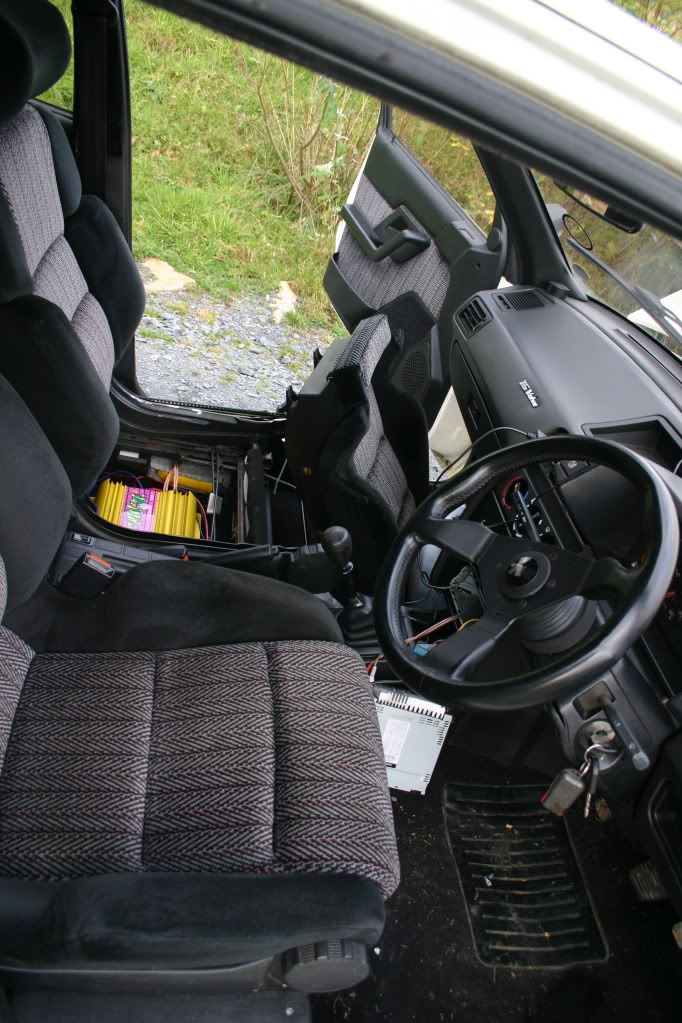 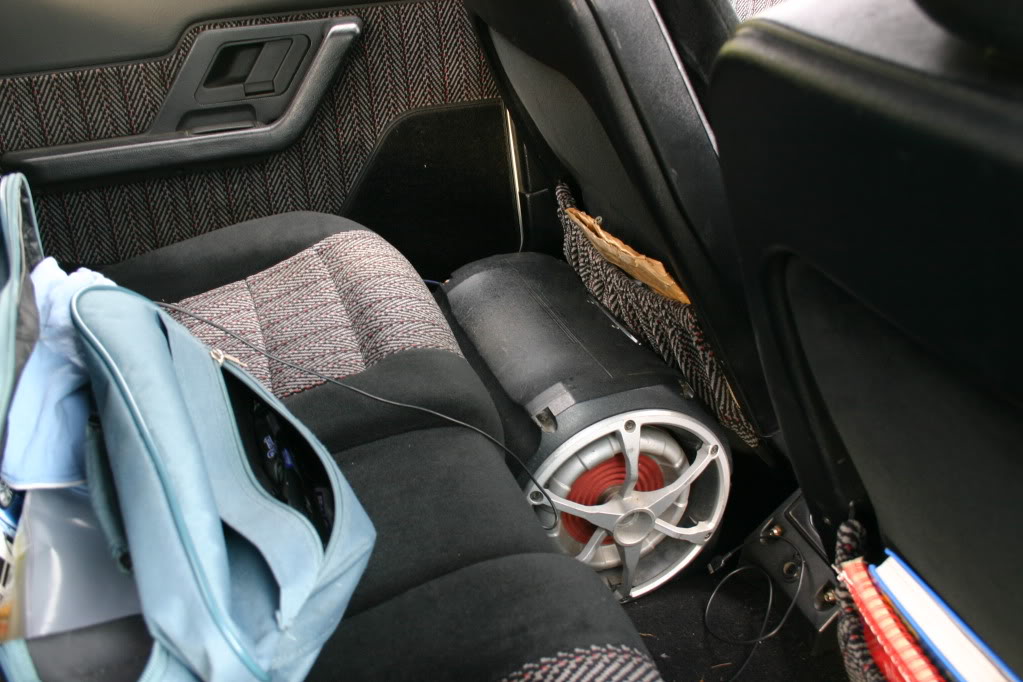 Got all of the wiring tidied up on Sunday, all nicely hidden away now in the boot. Kept me entertained on the M6... Didn't have it on much in Wales. Was enjoying the roads too much: 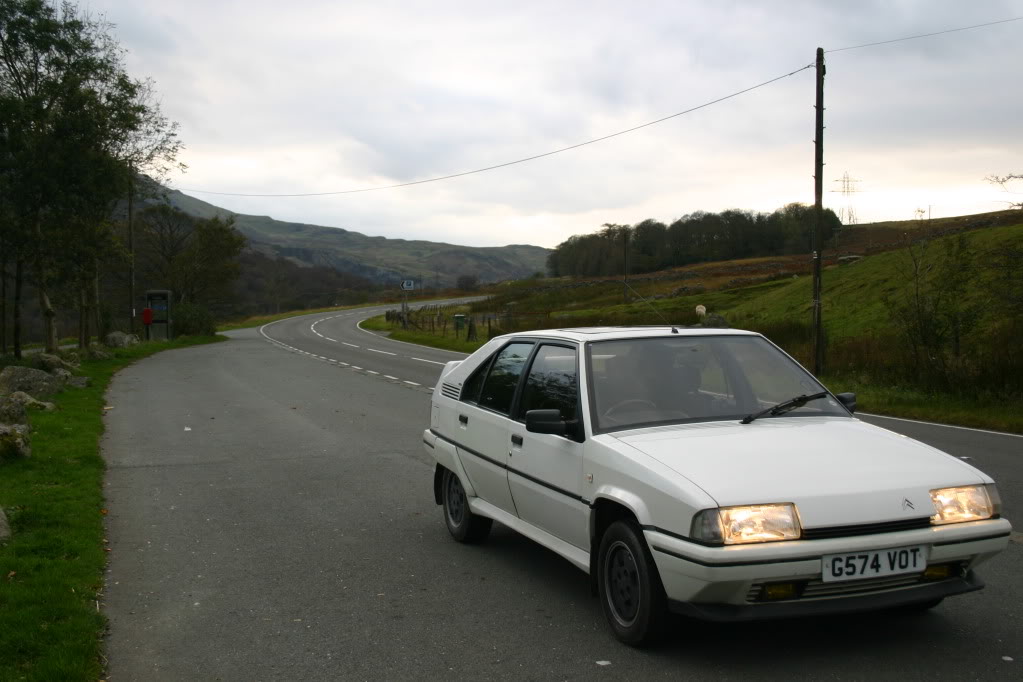 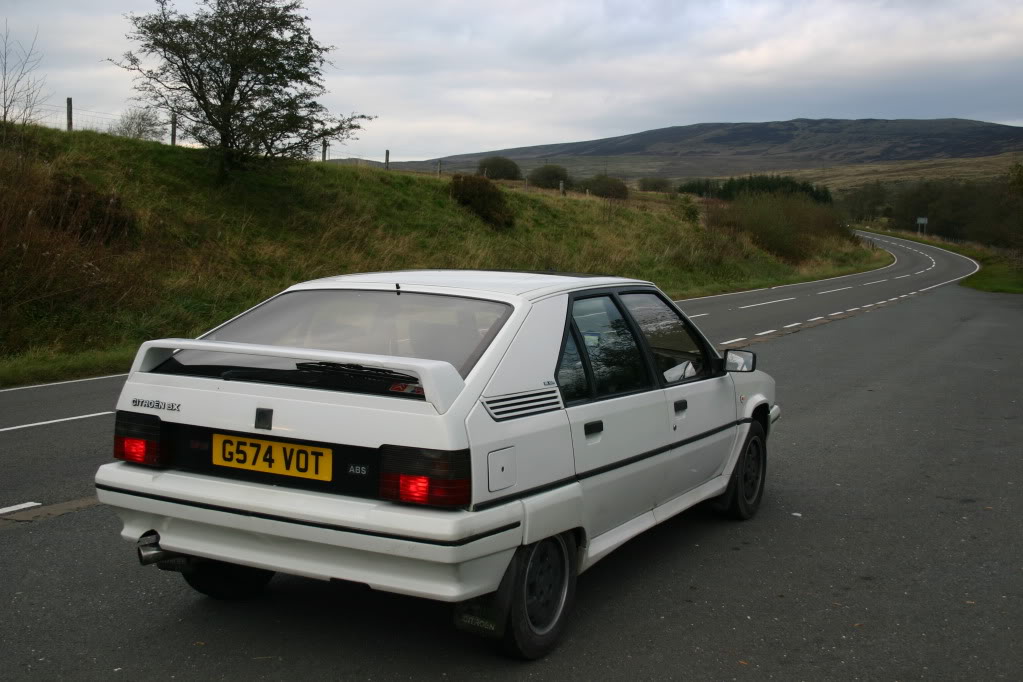 Slight idle speed problem... Seems to be better now I've had a fiddle. Oil pressure gauge has also started to work again this morning, after failing over a year and a half ago 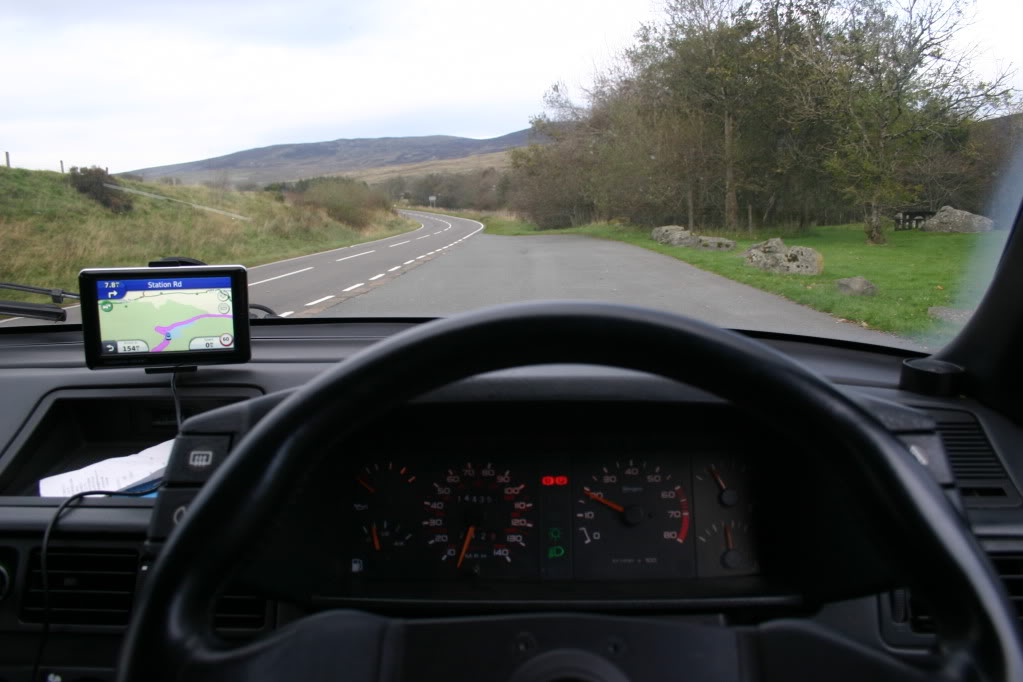 Good to be in a BX again. Bloody good.
Top

Had a reasonably productive weekend on the BX...

First job of the day was to sort the seat belt out. It had decided that it was going to retract, and never come out again. Once the new one (Thanks Gibbo) was all bolted in nice and tightly, I then turned my attention to the stereo wiring... Again. The front speakers really didn't sound good. And they are reasonably nice Pioneers, so my first thought was that they might be out of phase.

Pulled them out, then the problem made itself clear, the original connector on the end of the wires looked very corroded, and one was very loose. Snipped them off, and soldered on some new speaker connectors (left-over from a fitting kit), making sure the polarity was correct. I also simplified the wiring, removing the aftermarket tweeters (they've been annoying me for about seven years

) which weren't working properly anyway. Will fit some proper ones in the correct space on the dash when I get chance.

Once fitted and screwed in nice and tight (and I found some screws for the doorcard, which has been loose for months

), I added some felt to the back of the grilles to stop them rattling, fiddled with the amp and the settings on the head unit... Ten times better! It actually sounds half decent now.

I also tidied up all the little bits of loose trim and interior bits that I kept forgetting to do.

Next job, sort out the engine mount... And then the welding

Matt H wrote:removing the aftermarket tweeters (they've been annoying me for about seven years

) which weren't working properly anyway. Will fit some proper ones in the correct space on the dash when I get chance.

I've got some you can have, they are aftermarket but I modified them to fit underneath the grilles in the dash. I took them out as they sounded too sharp, but if they sound OK to your ears then you're welcome.