Anything about BXs
Messages: 157

After 7 pm only the lovely Helen Mayhew will do!. Idiot BBC let her go and she's still the best thing on radio in the last 20+ years to my ears. Thank goodness she went back to doing what she does best.

Thats why I want a DAB capable ie full or Highway type device. The old shitty Sharp unit in the 14RE was so cheap that when it was broken into the light fingered b******* left it! The Athena has a Bluapunkt thats OK except it gets engine interference on MW so no 5 live unless engine off. I haven't investigated..... the signal is terrible anyway too far (45 miles) from centre of London!.
Top

only thing I have to remember is to put my phone in aeroplane mode
Your phone wears too much make up and serves you drinks?

mds141 wrote:Your phone wears too much make up and serves you drinks?

That's the other halves job

It's actually a better solution than I feared - with a USB drive permanently plugged into the front and set to shuffle I get good music 100% of the time during my 30 minutes to work every day, without having to think about what I want to listen to.

And it's easier than I thought to choose music on the phone - this is showing how behind the times I am but I was absolutely amazed that it will connect to the internet, download all the album artwork for my MP3s, and embed the images within the files. It's surprising how much quicker it is to select an album from the picture!

After a few more weeks I'm still not satisfied

It's not a bad solution, but not as good as it should or could be. So I'm back on the look out for another head unit!

I just can't get on with using the phone to select music - it's not safe to do whilst driving and it's a pain to have to stop. Also, using the 3.5 mm input isn't great in terms of sound quality as you can hear the difference when switching to CD. And using a USB drive on shuffle isn't great either, as the head unit will only see the first 999 files on the drive. I've become very well acquainted with artists A to L...

Currently looking at the JVC KD-DB53 that RobC has the earlier model of, but it doesn't seem to have a pause button! Even looking through the manual shows no way of pausing a track whilst playing

That head unit comes with a remote which is very handy for skipping tracks on the iphone. I presume it would do the same with a USB as well. Also the main volume knob acts as a pause button (or mute if you're on the radio)! you simply push instead of turn it.

However I will double check this when I get home and update, just to be sure...

Stinkwheel wrote:Mat,
Have you thought of buying 3 or 4 cheap USB pen drives from e-bay pr amazon and having a different selection of say few hundred tracks on each, that way just swap drives every so often?

No, I hadn't thought of that TBH. It's a better solution that what I have now, but I think it would annoy me that it's not the perfect solution! Synchronisation might be more of a chore too. I'm doing quite a few miles for work at the moment, so it seems only fair I should put some of my expenses towards making the journeys more enjoyable...

Rob, thanks for the reply. A combined mute/pause button makes sense but I've used some where you have to hold it down for X seconds, or skip through menus, which is frustrating. Looking at the instructions it seems to offer folder navigation for USB drives so that's good. Don't know whether it supports a 32Gb drive though?

I've gone for a JVC unit in the end - very similar to Rob's but with Bluetooth instead of DAB. For most of the commuting miles I do there's little radio signal (digital or otherwise) anyway so it didn't seem a benefit - unlike the van where most trips are long journeys. Plus I found a great deal on it from Dynamic sounds - a tenner cheaper than even the best price on eBay! 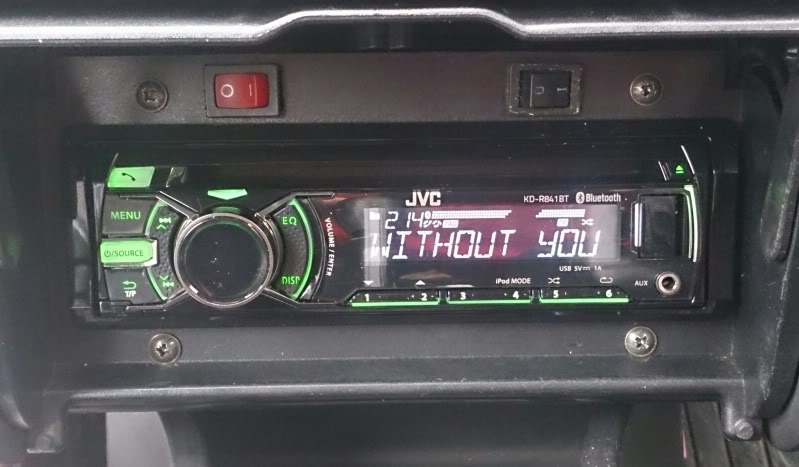 (Hint: it's not David Guetta)

It ticks all the boxes I wanted, but I'm still getting my head around all the colour options! Although the ability to have a high contrast colour like white for the daytime display, but a dimmer AND lower contrast colour at night time is quite handy. Will I be happy with this for the next 15 years like I was with my Pioneer...?

What are your two switches above the head unit?

I'm after some back to basics advice, I've read this complete thread but I'm not familiar with some of the terminology.
I have a Kenwood head unit, the sound is awful but I don't know if it's the unit or the standard bx speakers.

My plan is this.
Fit tweeters to the dash and tweeters where the rear speakers went in the c pillars.
Keep drivers door speakers - upgrade? To what?
Fit speakers on rear parcel shelf, but I don't want holes in the shelf it self so I want to make a cabinet out of black laminated wood that will sit on top of the parcel shelf.
I believe I will need an amp - what do I look for in an amp?
Will I need a crossover or filter (same things or different things) if so, what doi need to look for?
I would also add a sub, not for attracting attention as I cruise round Cardiff looking at the local night life with the bx on low, but for better bass extension that the fairly standard ex xantia and xm speakers I intend to use. Bass unit would reside either under a seat or in one if the cubby holes in the boot.
Any thoughts and advice greatly appreciated!
1990 BX 16V Platinum Grey
1990 BX TGD White
1960 Morris Minor Clarondon Grey
1971 Triumph 2000 Auto Valencia Blue
Top

I've found it difficult to get good sound in a BX - even now it's not as good as I've achieved in other vehicles previously. I think this is mainly down to the front speaker positions being rather flexibly mounted, instead of rigidly to the door. If you have the time I reckon it'd be good to rig up a mount straight to the door rather than the door card.

That said, your speakers (if original) are likely to be past their best too, and were never that great to start with. I'm happy with the Alpines I upgraded too, earlier in this thread somewhere. If you buy a set of component speakers like them (rather than coaxial types) they will likely come with a capacitor in the wire to the tweeters. This does part of the job of a crossover, in that it filters the base from the signal to the tweeters. But it doesn't filter the treble from the signal to the main speakers like a crossover would.

You may not need an amp, apart from one to driver the subwoofer if it doesn't come as a combined speaker/amp unit. It would be easy enough to add one at a later stage if you weren't happy with the sound.

And the two switches? The red switch is to disable the interior lights when a door is open, and the black one is to enable the head unit independantly of the ignition. Useful when camping to minimise battery drain, and in conjunction with a remote I can turn the head unit off for the night from the boot if I'm kipping in the car. They are (deliberately) not visible from the normal eye line as I think they look a bit rubbish.

Component is 2 speakers per side, coaxial is one speaker each side. They both do bass, midrange & treble, the component is better because they seperate the bass/mid from the treble, its a better sound. However, if you buy decent coax units, in a bx you won't hardly notice the difference & its a lot less faffing about as there are less speakers & they are also cheaper.

I've got 6x9's fitted into the rear parcel shelf, they sound awesome, & i upgraded the front door speakers as well, all this made a massive difference to the quality of sound, the original speakers are shite, they were when they were new, so 20 year old one's are even worse.

BX Bandit wrote:What is the difference between coaxial and component speakers?

Component can be a number of speakers matched to different sections of the overall audio spectrum.

Coaxial is as the name implies that separate speakers share the same axis allowing the smaller tweeter to be mounted (by the factory) within the cone of the larger mid-range/woofer.
1991 BX19GTi Auto
Top

Right, thanks chaps, under stood. Doing a different door related job yesterday, I've discovered I have Audax co-axial speakers already fitted to the front doors. 20watts rms if that makes any difference? Worth keeping or binning?
The ones I intend to,out in the rear are not coaxial though, but I was planning on using the c pillar speakers as tweeters - although not the original ones as they are fubar. Worth doing? If so, can I use a capacitor to filter the frequencies?
How would I split the frequency to a sub?
1990 BX 16V Platinum Grey
1990 BX TGD White
1960 Morris Minor Clarondon Grey
1971 Triumph 2000 Auto Valencia Blue
Top
Messages: 157