I was very lucky

I was very lucky

I swaped my wheels over the other week. I was driving it last nite. Withe my bro and sis in the car to pub. For a birthday meal. It was my antyes. the car didnt feel right. Drove to work after the meal. Droped my mate off from work. Then all of a suddern the wheels started knocking and the steering virbrating.
All 4 nuts on the passenger wheel was lose. I could move them with my fingers. My works a good 25 miles away.
Im sure i tighterned them. All week the car was good. Then all of a suddern that happerned.
Im sure im not the only one
PAUL JACKSON
1991 h reg 1.7tzd hatch in black 159.000 miles had
1992 k reg 1.7 txd hatch in red 179. 000 miles had
Renaul laguna exspessin 02 plate 1.8 16v 75 k had
cosa 1.2 brezze 150 k had
406 glx 1.9 td 170k s reg white got
Top

Was there any rust where the wheel bolt tightens against the wheel ?

Had it happen to a customers car originally.

I always check my own spare before fitting it as a road wheel.
Land Rover Discovery TD5
Top

Sounds very much to me of an error on Jackos part of not checking the bolts after a short road test.
Add that to not checking after the first hint of trouble and yes very lucky.

And I am so glad I do not have to share the same lengths of tarseal as him! 70mph unrestrained road wheel flying down the road does not just become about you.
Top

Have to admit to doing this myself, on the 16TRS when I fitted some wider steels, forgot to tighten up the nsf wheel when I went round afterwards with my "spider" as had just done them up hand tight. I went over a bump and it starting making an almighty racket. Though I had broken something at first.
Lots of Motors, mostly semi broken....
Top

in the old day in the garage trade there was a rule to always leave the old style metal wheel emelishers (hub caps/wheel trims) off till going round and checking all wheel nuts,

the other trick with the old metal trims we used to nip out onto the fourcourt when the parts delivery girly's were in drops parts of, whip the caps of and insert pebbles in them and bang them back on

thats the trouble with them plastic thingy's,

Years ago, whilst driving my old 1953 Series 11 Morris Minor, the rear wheel overtook me.
Wasnt going very fast and the motor came to a halt resting on the nuts of the U bolts holding the springs to the rear axel. No damage done, rear wheel embarasingly found a bit further up the road and easily reattached using a bolt each from one of the other wheels. I had had all of the wheels off a little while earlier but was distracted whilst doing up the bolts.

was it a front or rear as you know you can drive a hydraulic citroen on three wheels, so i cant see what all the fuss is

I've forgotten to tighten the front wheels up as well

Realised when i was going down the M1, they had been nipped up a bit so were on more than finger tight, thats probably what saved me. No vibration or noise, just pulled into the 1st services which luckily for me was only a few miles after i'd set off & re-tightend them, phew

3 years ago we had this problem with a frantic run to collect Natasha from Heathrow in Graham's newly acquired Ford Maverick, which had failed the MOT 2 days before, and had just had a retest the day before we had to collect her.

The journey there was completely uneventful. 10 mins into the journey home, and there was the nastiest clacking sound coming from the rear.

We dipped into a coned-off section of motorway and had a look round - nothing obvious. No noise at low speeds, but there when accelerating hard.

So Graham laid under the car, and asked me to take off at speed to see if he could pinpoint the sound as I shot off - nothing obvious, so Graham believed that the rear diff had lost it's oil, and that was the cause of the noise.

So we limped to motorway services, and phoned the AA, who were very busy. A patrolman on another shout was there and had a very quick look, and agreed, so he called base and they sent a low-loader, and without examining further scooped us up and took us home (which took hours, but saved me about £100 in diesel (thirsty things, Mavericks...)

When we got back to Hull and unloaded the car, Graham was standing at the side and noticed the problem instantly - the bolts on the nearside rear wheel were VERY loose. One was missing completely, the other 5 were either hanging out or finger tight. The bolts had cut the holes in the wheels egg-shaped, and we realised what a close call it had been - losing a rear wheel at speed would have been a catastrophe for us and anyone near. Had my sudden take-off while Graham was underneath resulted in losing the wheel he'd have been crushed instantly. 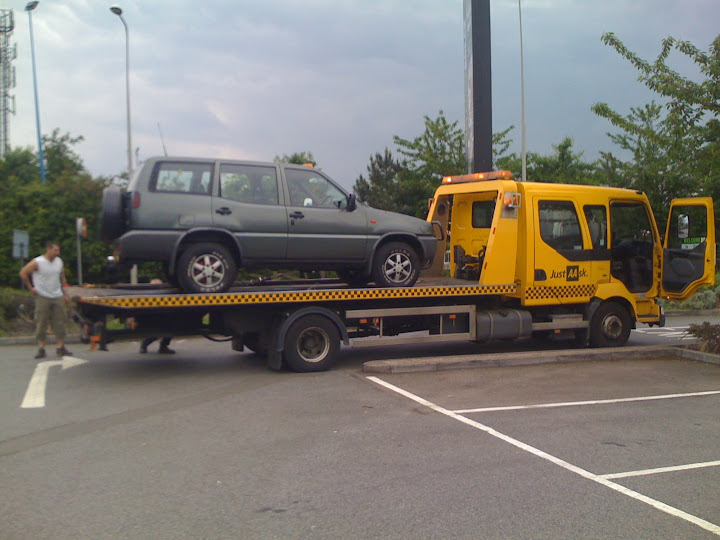 The humble BX14 plastic snap-on wheel trim sounds like a simple low-tech insurance policy then. Clips straight on to the wheel nuts, so it is less likely to detach itself from the wheel than the ones that clip on the rim and it keeps the wheel nuts from rotating.

I agree. An under-rated bit of clever design IMHO.
Ray