NOT FOR SALE: The Green Tiger, BX19TGD estate

Buy or sell parts etc. Please put 'Wanted' in the title if it is a request for parts.
Messages: 8 • Page 1 of 1

NOT FOR SALE: The Green Tiger, BX19TGD estate

Sad to report that my friend urgently needs to sell the BX he bought from me (or a guitar or PC soundcard that may mean he can keep the BX). 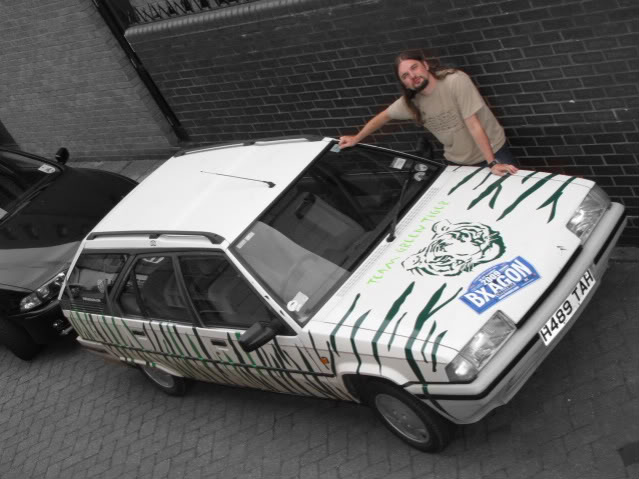 I haven't seen the car since March, and it hasn't been serviced since I owned it. However, it has had a replacement rear suspension unit after developing a leak (about two weeks after I sold it...) and I had a ridiculous amount of work done to the car during my ownership. That included timing belt, hydraflush, new alternator, replacement starter motor, ARB drop links, a front suspension arm and a fair bit more I can't remember.

It's not problem free. The new owner is a smoker, corrosion is making its mark (washer bottles, rear crossmember, LH rear wing, the heater control is a bicycle brake cable (I think the tap may have jammed too) and the driver's seat is a bit scruffy. It is also still covered in green stripes (stickers). However, it is overall very sound, has half a year's MOT and a couple of months of tax. Currently located in Ramsgate and he's asking for offers. Has to be worth £295 of anyone's money I would have thought? It's a great car and I often regret selling it. However, I hope to get my Mk1 up to the same mechanical condition and can't really justify two BX diesel estates. I have tried...

Contact MistahG of this parish, or drop me a PM if you're interested.
Last edited by Dollywobbler on Thu Dec 15, 2011 4:02 pm, edited 1 time in total.
www.classichub.wordpress.com
Top

I might know of someone interested, but do you know if the MOT lasts until May 16th?

MOT is up to 26th May. Perfect!
www.classichub.wordpress.com
Top

What's the significance with the date? The Citroen Classic Challenge maybe?

Maybe! But I thought I'd leave it up to you to suggest that it's the perfect Challenge vehicle...

It was actually Charlotte & Matt I was thinking of, as they were on the lookout for a diesel estate. This is only just down the road from them too so I've sent her the link.

I haven't heard anything from Charlotte for a while TBH and I did point her in the direction of several recent BXs... But you are right it'd suit them

Mistah G has got himself a job at the eleventh hour, so the BX will remain with him. Sad for anyone interested but rather pleasing for Mistah G!
www.classichub.wordpress.com
Top
Messages: 8 • Page 1 of 1