Anything about BXs
Messages: 28

Going from my experience, although limited, i've only ever had early injection or carburettor cars. Current astra, 1.4 carb 75bhp, best mpg i've ever got is 54, average since 2010 (i've kept a log, sad I know) is 48mpg. Starting it is an art, i'll admit, but only because the auto choke decides to work when IT wants to, but it'll always start - might just be a little but rough for a minute or two. It's powerful enough for daily driving for 1-2 people, more than that and it struggles. Nice carby noises! Especially when the 2nd choke opens up.

Now diesels, partner has a 1.5 CRDI Kia Rio, looks orrible, lots of turbo lag, then over boost at 1900-2500rpm, then nothing! Boring clattery common rail noise. But it hasn't had any problems in the 3 years he's had it. Not as economical as the figures say, it's supposed to get 65+ mpg but we've never got anywhere near that, usually does high 40's or mid 50's (like my 1991 astra does!) unless you're doing purely motorway miles with no traffic.

But, I wouldn't sniff at a 1.7 n/a TGD in metallic silver with grey tweed interior. Just something relaxed and intriguing about it, even though it's a diesel. Nor would I say no to a straight 6 diesel from the 70's/80's (merc/beamer etc).
I'm not a Saint, or a James, but a Tom Saint-James!

See, I don't really like the power delivery of petrol engines, as there generally isn't much until 3000rpm. A BX diesel is happy to change gear at 3000rpm. I love torque. My wife's Mini admittedly behaves in a similar manner (long stroke, heavy engine - lots of grunt) but most petrol engines are more like my 2CV, which means keeping the revs very high to make decent progress. That's ok in the 2CV, though it does make long journeys hard work! Feels wrong in a more modern car though.
www.classichub.wordpress.com
Top

Petrol for fun, diesel for the real world. Perhaps lpg petrol is the best of both worlds

Again, perhaps with my limited experience I didn't consider torque, vauxhall in the late 80's and early 90's had a thing about torque and engines designed in this period reflected that. My 1.4 is torquey, it is the same as the 1.3 found in earlier astra's with the same power but more torque. I quite often change 2000-2500rpm ish depending on what i'm doing, think this is where peak torque might be.

The BX14 I had didn't have as much torque as the astra, but it was much higher geared.
I'm not a Saint, or a James, but a Tom Saint-James!

The modern turbo diesel really take some beating, the old lag problems are pretty much non existant, £30 road tax, 60mpg and so quiet you would be had pushed to tell its not a petrol car. I have a Golf 1.6 TDI DSG (auto) with a trick 7 speed box, that does 2000rpm at nearly 80mph, it pulls like a train and feels alot faster than its 105PS would tell you.

BUT I wouldnt want one of my own when its 20 years old and dont alot of miles, too many sensors and gadgets.

saintjamesy89 wrote:But, I wouldn't sniff at a 1.7 n/a TGD in metallic silver with grey tweed interior. Just something relaxed and intriguing about it, even though it's a diesel. 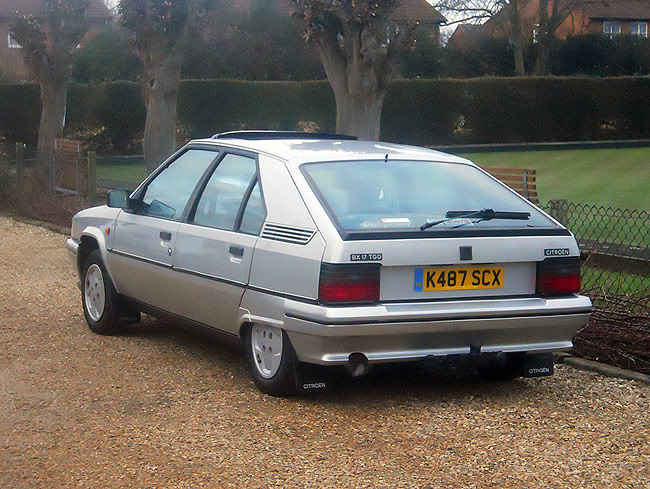 Sedate, soft, honest and workmanlike. I really love it and a completely different car to my TZD - not 'better' just 'different'. Which I suspect is the solution to the 'petrol vs diesel' debate. I had a 16TGS once, and compared to my subsequent diesels it was refined, quiet and enthusiastic (well, it was if you floored it). I've never driven a 16v but I can only imagine that they're a firecracker in the right hands (though probably not necessarily my hands!)

My cars have to sing for their supper - they have to be reliable and economical. In return they get pampered to within an inch of ther lives - funds permitting obviously. Given what I require from a car - diesels are my best bet. If my cars didn't have those kinds of demands placed on them and what I required was 'pure driving pleasure' (and I was a bit handier with a spanner) - I'd drive petrols.

If my enthusiam was for Italian cars - say Alfas (which isn't beyond the bounds of possibility)I'd want all that high revving, rorty 'musica della machina' type stuff - 'diesel' would be a dirty word. Which is why I suspect Leonard the motoring patriarch was a bit sniffy about oil burners. For him a car had to be about engineering purity; an intellectual proposition - not (as it is in my case) a workhorse.
Top

If it wasn't for the motorbike, I'd have probably had to sell a couple of cars to buy a diesel for commuting and long journeys. As it is, the minimal running costs of the bike means I can afford to use the GS for longer trips, although I hope to further supplement it with one of the Dyanes later in the year.

If I was looking at a new car, it would need some careful calculation. I've heard of a local taxi driver who switched to petrol power when changing his car last year because the extra mpg of the diesel barely covered the additional pence per litre, so the break even on the extra purchase cost was was the wrong side of 80k miles!
Mike Sims
BX 19RD Estate Mk1 - Timex!
BX 4X4 Estate - Oh god, I've done it again!
BX 17RD MK1 - it called to me!
BX14 TGE, - SOLD
XM Turbo SD,GS Club Estate,Visa 17D Leader,HY Pickup,Dyane Nomad,Dyane 6,2CV AZL,Falcon S,Trabant P50,3x Land Rovers (88" series 1,109" series 2a FFR,series 2a Marshall ambulance),DKW F7, Lambretta LD150 x 1.5,Mobylette SP93,Ural Cossack,Ural M63,CZ 250 Sport,Honda Varadero 125,lots of bicycles & tricycles including (but not only) Sunbeams,Higgins & Bates!
Top

MULLEY wrote:Perhaps lpg petrol is the best of both worlds

I'd agree with that. I frequent an LPG forum, and that seems to be getting busier in two ways. Previously it was mainly the done thing for big thirsty cars when they fell out of the hands of rich owners (who could afford the petrol) and filtered down to the rest of us. Now there is a lot of interest in making your average family hatchback cheaper to run, and also from the people buying new Range Rovers and the like.

As I've said before, I don't especially like the (turbo) diesel power delivery, and dislike the 4 cylinder diesel engine noise. But it makes driving long distances (just about!) affordable, and I enjoy driving more than I prefer petrol. I do like the simplistic lack of electronics on 80s/90s diesels, and I suspect that for a non performance vehicle, I might actually be quite torn between a large, torquey normally aspirated diesel engine and the petrol equivalent.

For what it's worth, I have changed my view back and forth over the last few years, but essentially I don't think the 'versus' angle is relevant. They are, in the late 'eighties, early 'nineties automotive arena the BXs of our fancies occupy like chalk and cheese.

I would choose a 1.9 n/a diesel over any other BX if day-to-day economy and useability were the only factor. However, no diesel (incl. TD) BX I've ever driven can match a GTi/16v for performance and speedy enjoyment. So it's not really fair to put the different beasts up against each other on the same playing field.

I am a recent diesel convert and well the economical value is very apparent to me giving my fuel source is cheap.

Performance is missed although on the road I daily drive the overtaking opportunities are limited anyways and on the hill well thats the only blot compared to the petrol veriant.

) is that Diesl vehicles are taxed heavier away from the pumps in the form of ahigher Road Tax levy and whats called a road user charge of having to buy miles before you use them.

That taken into account the Diesel still costs less to run provide you do the mileage to wipe out the effect of the daily charge (road tax).

My petrols on the other hand well one has Aircon and on a hot day (a rare feature this summer) is a blessing that the comfort justifys the cost of not using the Diesel.

I will sit on the fence on which one overall is best but watching the fuel gauge go down slowly certainly is a good draw card to diesel.

Plus the (common rail) diesel runs at much higher pressures, so injector timing is more critical. Also they usually (always?) have a variable vane turbo, not to mention the particulate filter (try Googling DPF problems…) The petrol engine is starting to look a bit more simple now!

In a bid to get low emissions etc the bigger displacement units are being replaced by smaller capacity units with turbo chargers, which again are quite complicated now to get the lowest Co2.