This evening, I shall mostly be doing the happy 'I got one, I got one' dance.

- Busy Sat 18 Feb, didn't spot this post until the next evening - looks like it passed everyone else by too!.
--- Crap, there is no way I can get to Bristol until next weekend ...
- But, as pointed out, no photos and the ad is - well, one of those that makes you read between the lines. So maybe it'll sit for a bit.
--- Thread seems to have passed everyone else by as well. OK, let's keep vewwy vewwy twiet and hunt wabbits, I mean check the Gumtree link twice a day Mon/Tue/Wed
-Thursday 23 afternoon - ad still there, phone the guy - I could go Sunday? Nope, he can't do until Tue. I can't do Tue.
-Fix for Wed 29 pm.
- Wed 29: hop on a train from Paddington, eat lunch, browse through Haynes manuals, play with phone, usual train stuff.
- Arrive Temple Meads, no problems getting bus to where the car is (good directions etc)

It's clean, interior is in very good nick for a 153K car - parcel shelf supports have broken, but those can wait. Exterior has the usual odd scratch/dent that you'd expect on a 21-year old car, the major things on that being that both front and rear bumpers are cracked (but front at least is secure - apparently seller bought it like that and it passed MOT last year). The boot is starting to rust in the corners, but hopefully not too major, door hinges - again, a tiny bit of surface rust, but a good clean/treat should fix that. Front suspension may need recharging, there's a little bit of a pull to the right and judder through steering at *cough* 75 mph - but it has just had 2 new tyres, so hopefully only a tracking tweak there. Bit of a rattle at the back, but doesn't sound terminal - exhaust clamp? - possibly even the loose parcel shelf rattling in the boot!

Pile of service history 4 inches thick - everything since the car was first registered in Aug 91. Originally a lease car, which was then purchased by the user/leaseholder for his wife when it came to the end of its 3 years or so, guy I bought it from has had it just over a year and was obviously fond of it, but sometimes you got to do things you don't want to do like sell a car you like! He has a BX estate, have encouraged him to sign up here so he can keep up with how it's doing - and as he's a fan.

I need to go through the service history properly and get a handle on exactly what's been done - few things I spotted which made me think "good, that's been done" and will post a more detailed snagging report a) when I'm less knackered (4 hour drive back :S - it behaved itself beautifully, but the door seals will have to be replaced as that wind noise was frickin' annoying) and b) when someone more expert than me has looked at it and gone '

how could you have missed that?!!'

- hopefully nothing show-stopping (and I don't believe there will be)

I will get a photobucket account sorted when I can be bothered (EDIT - which I have now done) - Taken at the service station 'cos I was dying for a cup of tea and figured a stop would mean that the traffic was slightly less awful closer to t'other end of the M4. Light was starting to go, will take some more pics tomorrow. 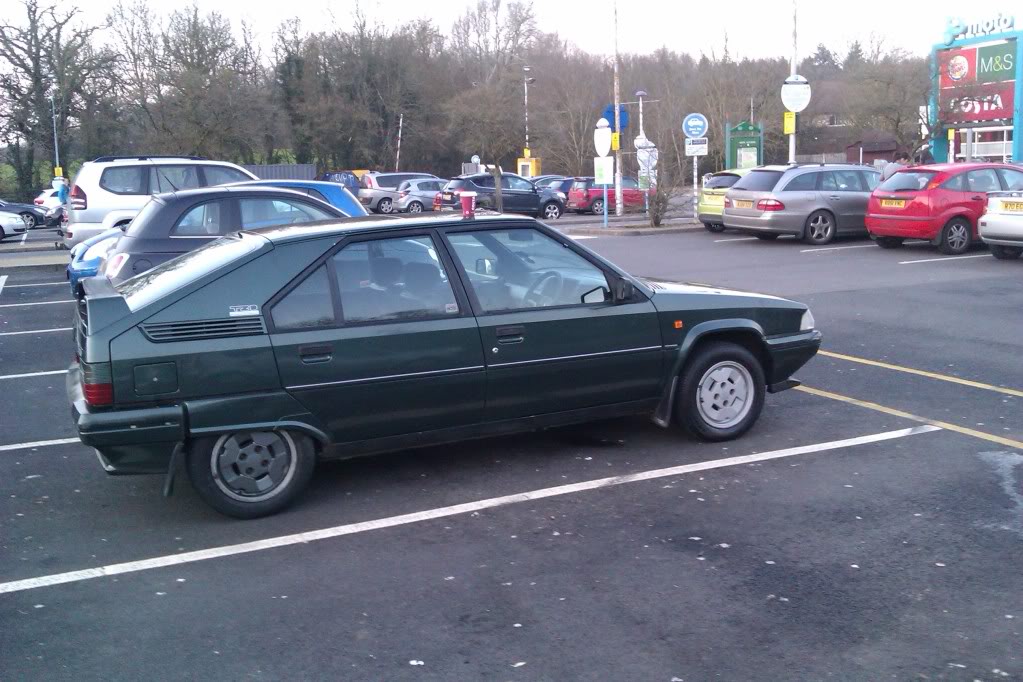 So! The really important question now (given the date) is "If you are a millionnaire and single, will you marry me?"
Last edited by Caffiend on Thu Mar 01, 2012 9:59 pm, edited 2 times in total.
Diagonally parked in a parallel universe
1991 TZD hatch (Triton Green)
1992 Hurricane
Top

About time too! Bit strange about the mismatched wheels, but that's a minor issue.

Spot on, well done. A big thank you due to Richard me thinks?

You're right Defender, I sent a PM, but being full of glee whilst exhausted made me forget to do it publically

- thanks for the tip off RxBx! (by the way, visual inspection of radiator only, but it looks fine, no evidence of any past leaks even).

Yeah Mat, it's just that one wheel which is different - at least it's the same pattern! Since no-one took me up on yesterday's proposal ~sob, some of the cosmetic stuff is going to have to sit quite squarely in the "later" category. First things first - fluids and cam belt change (it was done 40K miles ago according to history) - and see what else Chevronics come up with as immediately necessary. There's a fairly recent advisory on water pump, so will get that done with cam belt change.

As you said, it was about time for me to put my money where my mouth is

- there's been a fair few good TZDs changed hands recently, but seemed to be a bit of a dearth of non-SORN ones the last few months of last year (given lack of facilities and only having the most basic mechanical skills I had to have something driveable with at least a couple weeks MOT!).

Oh, and I didn't say yesterday - but [girl] it's even the right colour [/girl]
Diagonally parked in a parallel universe
1991 TZD hatch (Triton Green)
1992 Hurricane
Top

very nice and worth the wait,
Its almost the same as a hurricane isnt it ?
And yes its one of my favourite colours as well
1991 BX Meteor 1.6

Caffiend wrote:Since no-one took me up on yesterday's proposal

Well, I'm not single and not a millionaire...and besides (apparently) I'm a bugger to live with. Something about oily fingerprints all over the soap!

I've heard good words about Chevronics (Rob?), so you should be in safe hands there. Shouldn't be too difficult to find another wheel, or paint the one you have. Might be worth checking that the spare is the correct type for use with the alloy wheel bolts - it looks like the standard steel wheels but has spacers around each bolt hole to stop the (longer) bolts from bottoming out. Rather stupidly I declined the offer of the correct spare when I bought my set of alloys (thinking I'd have 4 spare wheels already!) and have spent the last 8 years looking for one.

Thanks for the tip about the spare! Hopefully in the next couple weeks I'll have the opportunity to get it on the ramp at the college workshop so I can have a good poke around underneath (unless Chevronics are nice types who take a sensible view of 'elf & safety and will allow me to have a look as long as I'm accompanied by one of their undoubtedly responsible mechanics). 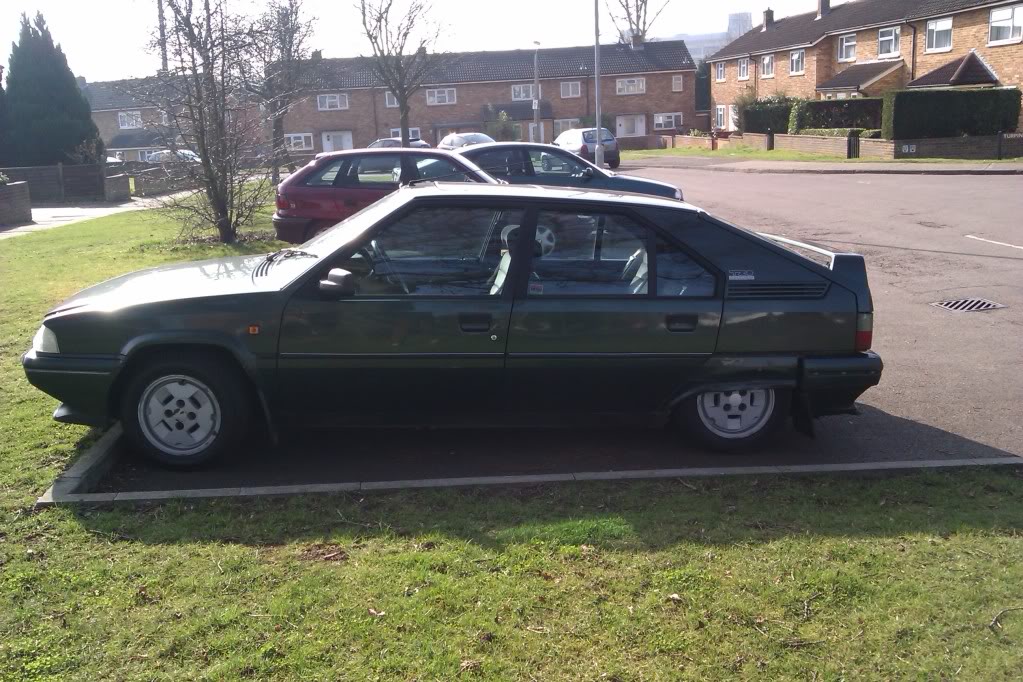 The near side - missing trim is in the boot, just needs re-attaching. 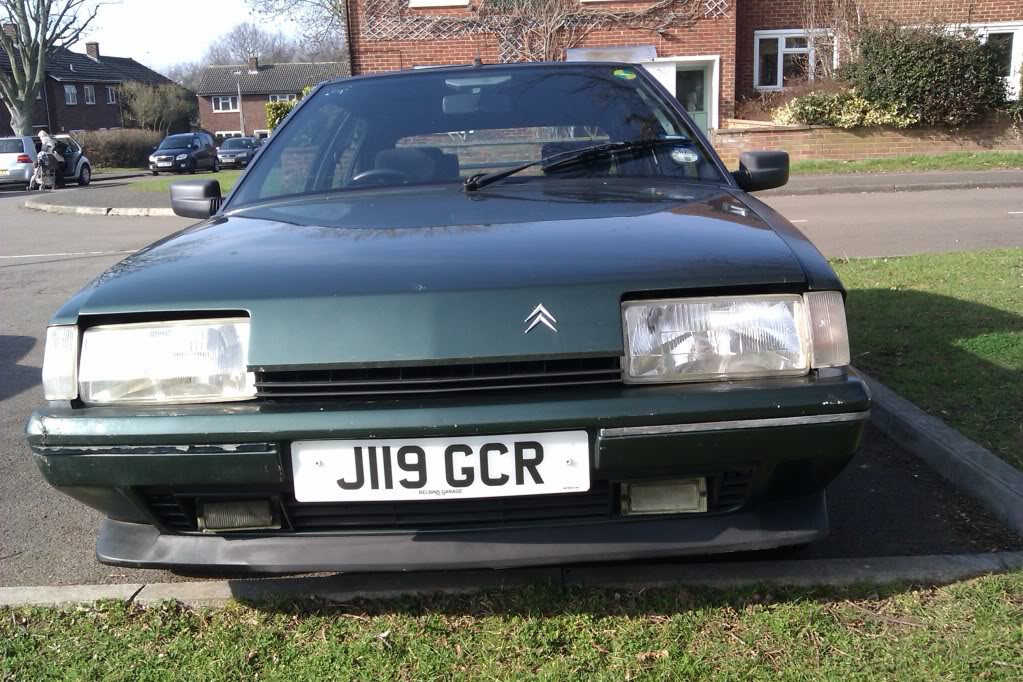 Full frontal - and just realised I popped the bonnet catch before I took this, it does actually close ~grin. The sunroof, however, doesn't quite. Not enough for water to get in, but enough that it creates a bit of wind noise. I'll ask the experts to look, but it may be a 'have to wait' thing - any diagnostics ideas gratefully accepted. 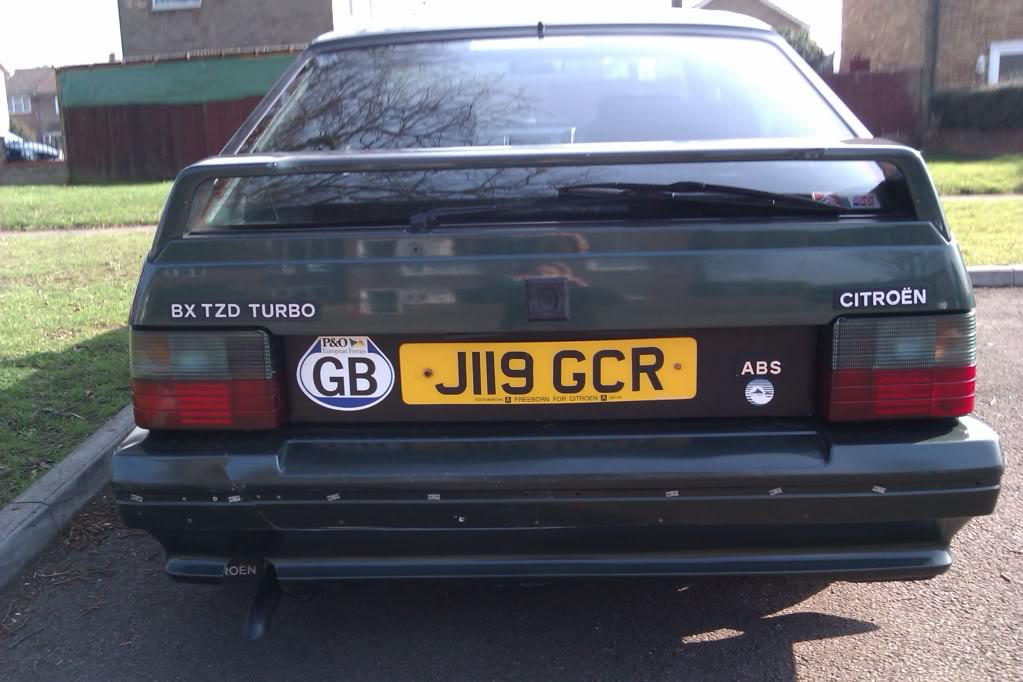 ... and the back. Rear bumper also cracked, but secure. Hopefully no damage underneath. 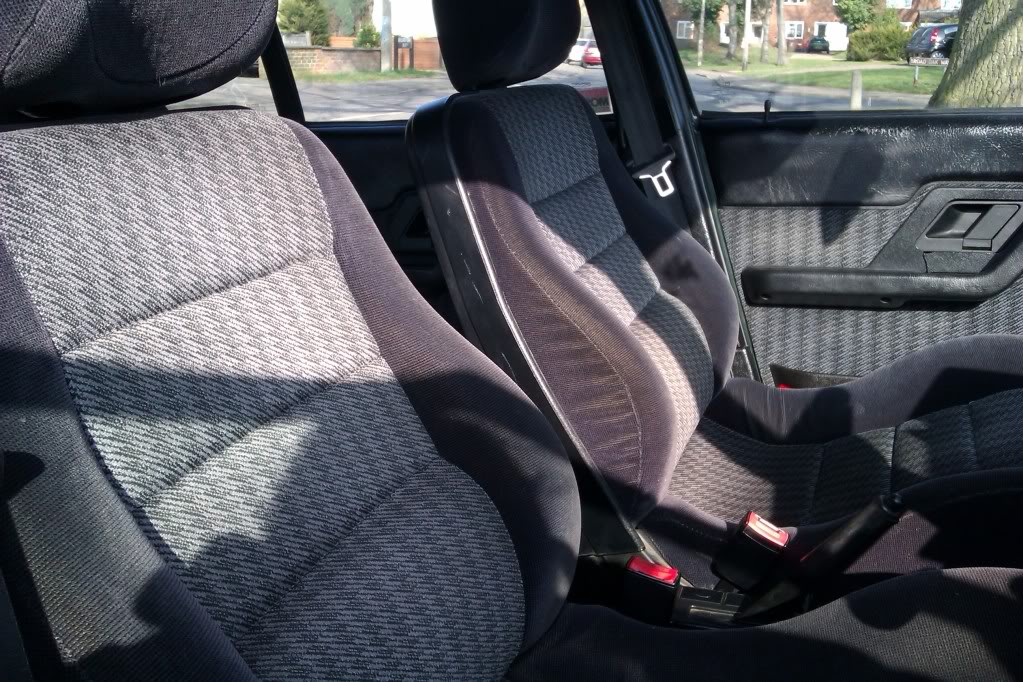 Interior. Dials are a bit worn in places - oh, and the RH dash light doesn't work, which is mildly irritating. Will have to get the electrics checked out as well, rev counter etc all working OK, but don't want faulty warning lights. 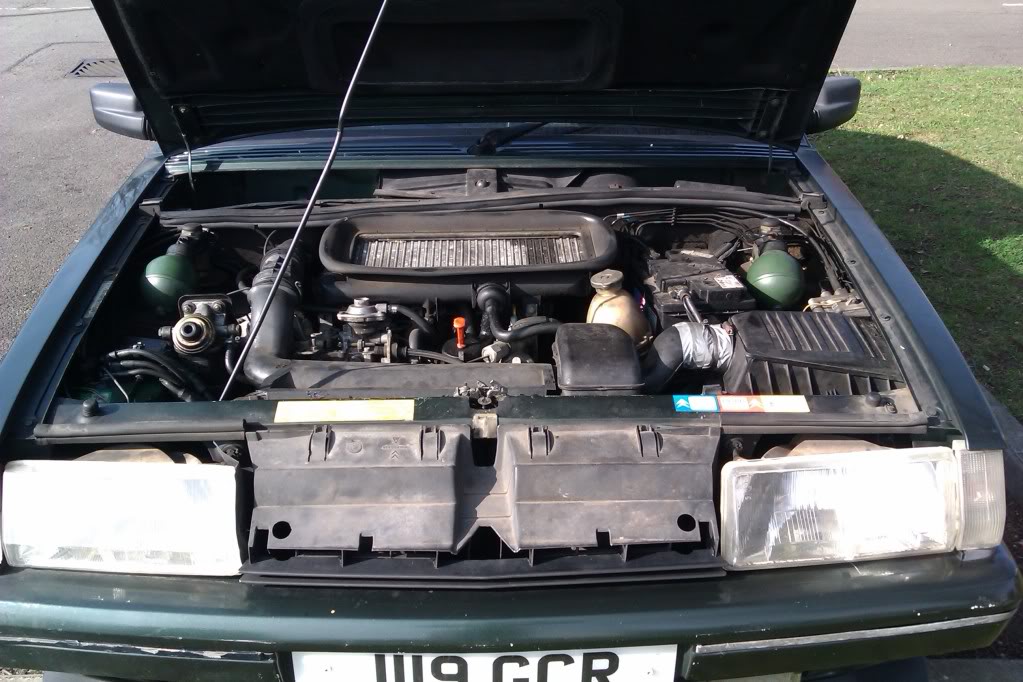 Nice spec and colour (and the best GB sticker!), loving the odd speedlines.

Heh, I nearly added 'And NO Mick, you can't have the splitter' to that shot.

I did post 'vert triton' Hurricane in the ideal BXs thread, but the differences are really (from memory) only cosmetic - Hurricane was the TZD engine with the GTi bodykit - no spoiler and (I think) different interior.
Diagonally parked in a parallel universe
1991 TZD hatch (Triton Green)
1992 Hurricane
Top

Those inserts just need stripping and spraying staing black though.

She will be a lovely example when up to scratch and look fab in Triton Green, the differenes between a TZD Turbo and Hurricane was that the optional alloys (which you have anyway) are standard fit, and it has a P2 16v rear spoiler in place of the baby-walker type and a bespoke interior and side stripes/decal.

Its worth checking if the mis matched wheels are all the same width as they do differ.
Lots of Motors, mostly semi broken....
Top

Awesome, thanks, will you be at the X rally in April (or E Midlands meet 25 March?) and if so, please may I hand over some readies and take it then (PM me with how much you want for it please?).

Eek, like the spare tyre, I hadn't even thought of checking wheel widths as they are all the same pattern. Better measure up, because that will have to be changed sooner rather than later if they are different. I'm such a grasshopper ...

Should have said different rather than 'no' spoilers on the Hurricane, but I don't consider those baby walker types spoiler-ish - I like the understated-ness of them. Not that the P2 type looks terrible, just much more "look at me, I'm a performance car".
Diagonally parked in a parallel universe
1991 TZD hatch (Triton Green)
1992 Hurricane
Top

The Green Goddess (temporary name to differentiate it from the Blue Beast) is going into Chevronics on Thursday for filters/fluids/cam belt change.

There was a slight film of oil round the car after all the rain yesterday, so will get that checked out as well, don't think there can be any major leakage as it got me home OK last week!
Diagonally parked in a parallel universe
1991 TZD hatch (Triton Green)
1992 Hurricane
Top

I saw a J reg exact same car round the corner from home in Letchworth last night, parked in a drive and there was a bit of what looked like an LHM leak in front of the front wheel, was that you?
Good call with chevronics, they will take care of it Rob is a good bloke.

It's actually my lovely relatives who are letting me use their driveway until I've had it serviced and flogged the Xsara, which I shall put up for sale once I've washed it and had a couple of bits done.

So, it's LHM - thanks for the heads up, was going to grab a spare bottle from Rob but better swing by Halfrauds sooner and pick one up so I can top up before I drive over to Hitchin. It was hard to tell on Sun with it hossin' it down, all I could see was a pretty rainbow and didn't fancy standing in the wet with the bonnet up to find out exactly what it was and from where

Unfortunately, late last year the hydraulics were topped up with engine oil as an emergency measure (at least it was that not water), so although it was flushed ASAP, I have lined Rob up to do it again, he'll be able to let me know what the leak is.