I was a bit reticent about starting a blog of my own, as generally I'm rather humbled by the level of mechanical knowledge and practical know- how that seems to constitute much of the material in other people's blogs. On flipping the bonnet of a motor car, my own mechanical knowledge extends to being able to point out which bit is the engine, and which bit . . . isn't. Reporting on how I put a sticker on my windscreen after reading about how someone reconditioned their thingyamabob after the flay rods came askew on the treddle (or whatever) seemed a bit . . . well, superfluous somehow.

Be that as it may, as I've been so busy with both of my cars recently it seemed a shame not to have a dumping ground for all the 'stuff' that didn't make it into other threads. And as my paint/bodywork/refurbing skills aren't that bad, there might be something here that's of use to someone - hopefully.

Apart from a knackered drive shaft and routine maintenance, I've had just over a year of trouble free motoring in the Hurricane - I bought it at 173,000 miles and it now stands at 184,000 - which I think is pretty good going? However, a couple of months ago it got broken into, and although nothing was stolen or damaged save the drivers door being bent irreparably (I can only assume it was kids twatting about) it's been a bit of a palarver getting it all sorted.

I managed to source a door from Shaun in Wakefield for 25 quid and although it had 'potential' needed quite a bit of fettling (by me) in order to get it tidy enough to paint. I was a bit apprehensive that there was no way I'd get the car looking as nice as it was before the break in, but needn't have worried as the paintshop where I took it did an excellent job. The only real problem was sourcing the correct colour for the striping as there doesn't seem to be quite the demand for car pinstriping as perhaps there once was. Luckily, the place where I bought it (after they sent out the wrong colour originally) found 50 metres of 3mm lavender pinstripe in their stock room which they kindly swapped for my 10 metres of the wrong colour. I now have enough lavender pinstripe for 12 and a half more Hurricanes - bingo!!

The downside of too-ing and fro-ing to the bodyshop was that the Hurricane began to look like a dogs breakfast, and as I was concentrating on sorting my newly acquired TGD (and keeping the other areas of my life afloat) polishing it with the door hanging off seemed a rather empty pursuit somehow - not to mention a bit depressing. Anyway, everything was finished this weekend, and as I found myself with time (and hopefully the weather) to give it a good clean, I went for the 'mother of all valettings' option. The object of the exercise was to get it looking like this again . . . 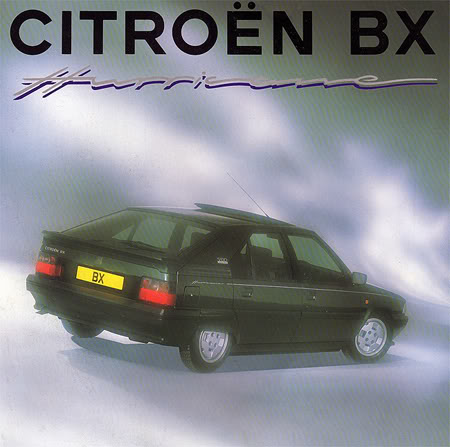 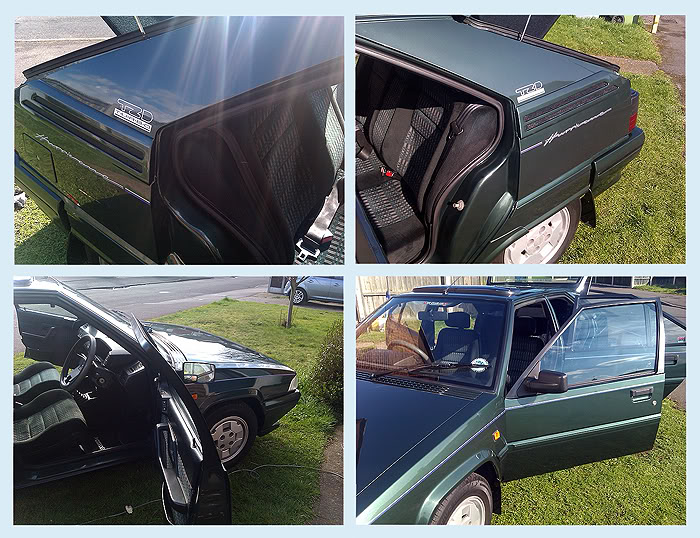 The repairs I did to the rusty rear door shuts late last summer have held up well with only the rear of the sill under the wheel arch needing a bit of 'remedial work' (but I keep a beady eye on them anyway). The B pillars will need sorting at some point as they look a bit tatty and there's a bit of peeling lacquer round one of the door handles that needs sorting - apart from that - looking pretty good I think. I also have a pair of newly refurbished speedlines to fit to the rear when I get the chance - the current ones are bit bubbly in the middle. 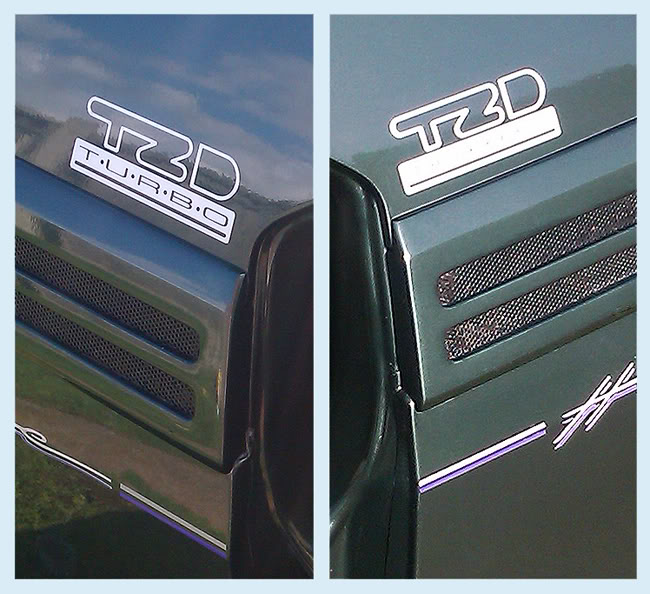 Thanks to Richard (RxBx) I was 'signposted' to a pair of new 'TZD TURBO' decals on ebay a few months ago, and now seemed an opportune time to have a go at fitting them - the old ones were looking a bit thin. I was rather nervous applying them as a f*** up meant I had to go to all the trouble of sourcing a new set, which I assumed wouldn't be easy. Anyway, they went on perfectly and I had a good sit down, a cup of tea and a fag afterwards to steady my nerves

. I think I'm going to replace the striping on the passenger side now as it suddenly looks a bit tired. 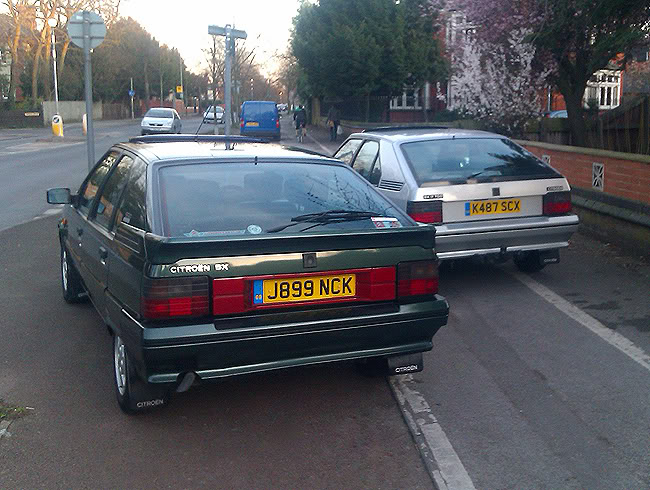 Both my cars outside my mate Andys this evening, where they now reside. No more street parking for me after all that hassle!

The TGD is still in the process of getting 'sorted' and the welding on the inner wing is now complete (thanks to Shaun) . . . 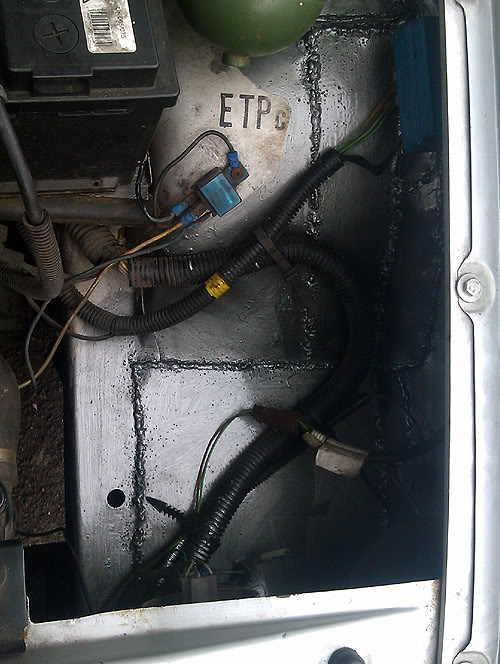 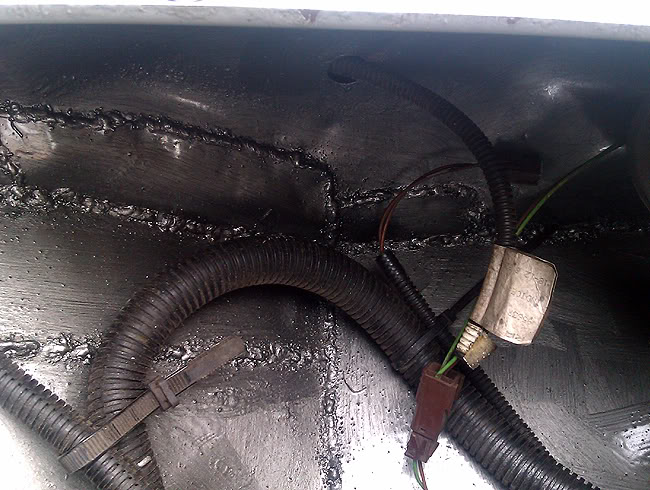 Although I'm a bit of a mechanical idiot, I know enough about bodywork to know that it wasn't 'a bit' of welding that needed doing, but infact; 'a lot'. I'm no expert on welding either, but Shaun seems to have made a really good job of it, certainly enough to keep it solid for the foreseeable future and get past the MOT man.

The wonky pedal box has also been repaired and consequently the car now goes like (admittedly rather reticent) shit off a shovel - oh alright then it's slow - but it's supposed to be slow. All's well in 17TGD land then? Well no, not quite. A couple of the linkages in the gearbox have suddenly started playing up a bit. Who's going to fix it? That's right - Shaun! Hopefully, after that lot the TGD should start to fulfill its potential as my uber reliable everyday drive. After a couple of years of 'Xantias from hell' ownership, it'll take more than that lot to put me off.

Well done that man, smashing blog! Can't ever beat a bit of polishing, especially if you can sit somewhere nice to observe the results. I think you're getting pretty close to that brochure picture.

Hurricane looks fab, I do like that colour and don't think i've seen it before on a BX, is it a special hurricane colour?

Like the TGD too, one of the best colour and trim combo's IMO - if it has grey tweed seats, but IIRC it does.
I'm not a Saint, or a James, but a Tom Saint-James!

That's a fine pair of BXs. Especially the Hurricane - which must be one of the best BXs around. Period.

My BX TZD is the same colour - Triton green - although the model isn't the Hurricane version I really coveted. I've also seen it on petrol versions, so don't believe it is a 'special', just getting rare-ish now.

Remind me never to park mine next to Paul's (the cosmetics are WAITING until I've got the mechanics sorted!) - they both look super!
Diagonally parked in a parallel universe
1991 TZD hatch (Triton Green)
1992 Hurricane
Top

saintjamesy89 wrote: Can't ever beat a bit of polishing, especially if you can sit somewhere nice to observe the results.

Actually many of my 'life is sweet' moments' have occurred whilst sitting on an up turned bucket in the sunshine and drinking a cup of tea - staring at my shiny car - sad but true!

The Hurricane colour is 'Vert Triton' (ERT). I think it was a standard colour on most BXs in the late 80s/early 90s, but the 'Etna' velour interior was specific to the Hurricane (and the 'Ourane' its French counterpart \/ ), although it was used for early VSX spec Xantias as well. 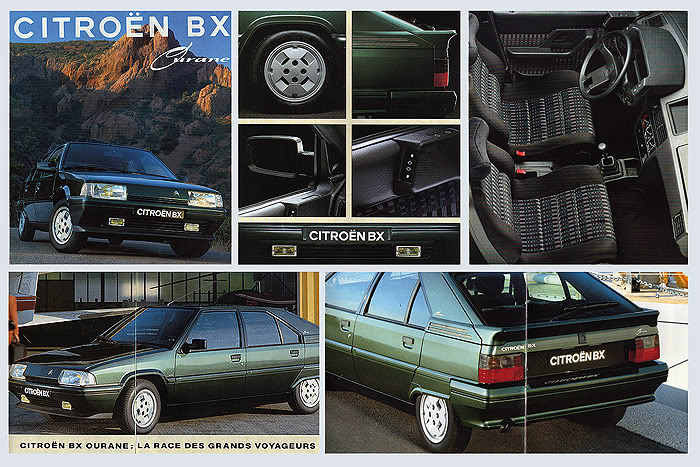 The silver 17TGD has the tweed/grey interior, which as Tom rightly points out is very nice. It currently needs a bit of cosmetic work to get it really tidy; I've a new steering wheel and a set of new rubbing strip/embellishers for the doors as the current ones are a bit tatty and there's a small amount of rust along the base of the B pillars and rear door shuts that I'm staring to sort out (what's new!?). I've also managed to source a plastic, long nose bonnet as the inner skin of the current metal one is pretty rusty in places. Getting it painted will be major outlay so that will have to wait for a while. The windscreen is also starting to de-laminate in places, but Richard (RxBx) has got a replacement with my name on it. The priority at the moment is to make sure it actually works and is likely to stay working!

It's really a completely different car to the Hurricane; it has a much softer more 'Citroeny' ride and an honest 'low spec' charm that personally I find very persuasive.
Top

Paul your worse than me!

your dedication to the marque is wonderful though, well done.
Lots of Motors, mostly semi broken....
Top

I find myself wanting that Hurricane really quite badly

I love my TZD in the same colour and not fussed about the different spec interior, but

Alternatively, I hereby offer mine for the 'polishing off' competition mentioned in another thread

actually with Paul's ,Tim's and Vince's skills we should be able to knock out a few cars in a day, I'll take charge of the dosh

I could help with the polishing! I'd like to think i'm not too shabby at it. But I might be tempted to go all cliché and wear hot pants and a suitably small top, maybe some cowboy boots too

saintjamesy89 wrote:But I might be tempted to go all cliché and wear hot pants and a suitably small top, maybe some cowboy boots too

Yeah, brilliant idea! And we could have a wet T-shirt competition and a prize for the best pair of 'moobs'?

(but then again - maybe not)

Paul296 wrote:And we could have a wet T-shirt competition and a prize for the best pair of 'moobs'?

/nominates self as official photographer, as sadly excluded from participation on the basis of not having moobs

EDIT: Afterthought - will need to borrow someone else's camera though.

The cleanliness of this blog is rapidly becoming inversely proportional to the cars it started being about ...
Diagonally parked in a parallel universe
1991 TZD hatch (Triton Green)
1992 Hurricane
Top

nah its ok , your one of the lads now

light travels faster than sound, thats why you look intelligent and then you spoil it all by opening your mouth !!!!!
Top
Messages: 469