at you fellas! Had to work today, knackered after moving house yesterday and still many many things to sort out.

Nearly moved, got all major bits across in our new place, old house is a complete tip - stuff to sort ALL over the place! No internet at the new house yet, but i'll be here (old house) all tomorrow sorting schiz out and waiting for shitty City Link to pick up some wheels I sold.
I'm not a Saint, or a James, but a Tom Saint-James!

Did I mention I got a 2:1? Will be interesting what grades I got in which modules and how my dissertation went. If I got my arse in gear I could have gotten a 1st, thing is i'm just a little too bit lazy - and none of my 1st class achieving friends (that is, most of my friends) have a house, fiancé, part time job and 2 cars that both need attention...
I'm not a Saint, or a James, but a Tom Saint-James!

Ooh, fiancé now is it? Can I be bridesmaid, I've never been a bridesmaid

I'm expecting my results on the 29th (should have been the 21st, but for a "technical problem"). Hoping for a 2:1.
Martin

Thanks chaps, I was pleased with a 2:1 cos I did do lots of work over the 3 years! It's been unofficial fiancé for the last 2 years, when we're settled in this house we'll have an official engagement party with all the family and stuff

We're having groomsmaids and page-girls! Probably going to have a small ceremony, not in a church even if they finally agree on the matter of gay marriage, had several negative experiences with church weddings/other religious ceremonies. Don't want to upset anyone who may be religiously inclined so I won't rant *itches to rant* hmph. But we're having a big-ass reception in a big field with a posh marquee, and lots of candles and many kegs of ale! Hooray ale!
I'm not a Saint, or a James, but a Tom Saint-James!

Getting married in fields is definitely the way forward. We did it! (albeit with a separate civil ceremony for the legal wedding at Daventry Registry Office. The people seemed a bit miffed that we were so obviously not-bothered about it!)
www.classichub.wordpress.com
Top

Gosh its almost been 10 days since I have done any BXing! Thought I was feeling a bit queer :lol.

Went to see the old gal this evening, and what a lovely evening it is too! I've finally gone to see my lovely Dr and he's given me some industrial strength hayfever nose spray stuff, now I can enjoy being outside without going all puffy eyed and nasal. Plan this evening was to have another go at the front brakes and then put the newly shod front wheels on and whip the rears off. Well in a simple world that would be perfectly do-able, but in my world...

No luck with the front brakes, even with my now found gert'un hammer. So I give her some revs in 5th, and the brake disc retaining screws on the drivers side shear off... Shit. So I give up, put the wheels on the front, and hey presto all seems to be spinning fairly freely after a good blast at 5000rpm in 5th. Bad news is the speedo is now not working...

Newly shod wheels, they;ll get repainted in the future some time, after all the mechanical stuff is done. 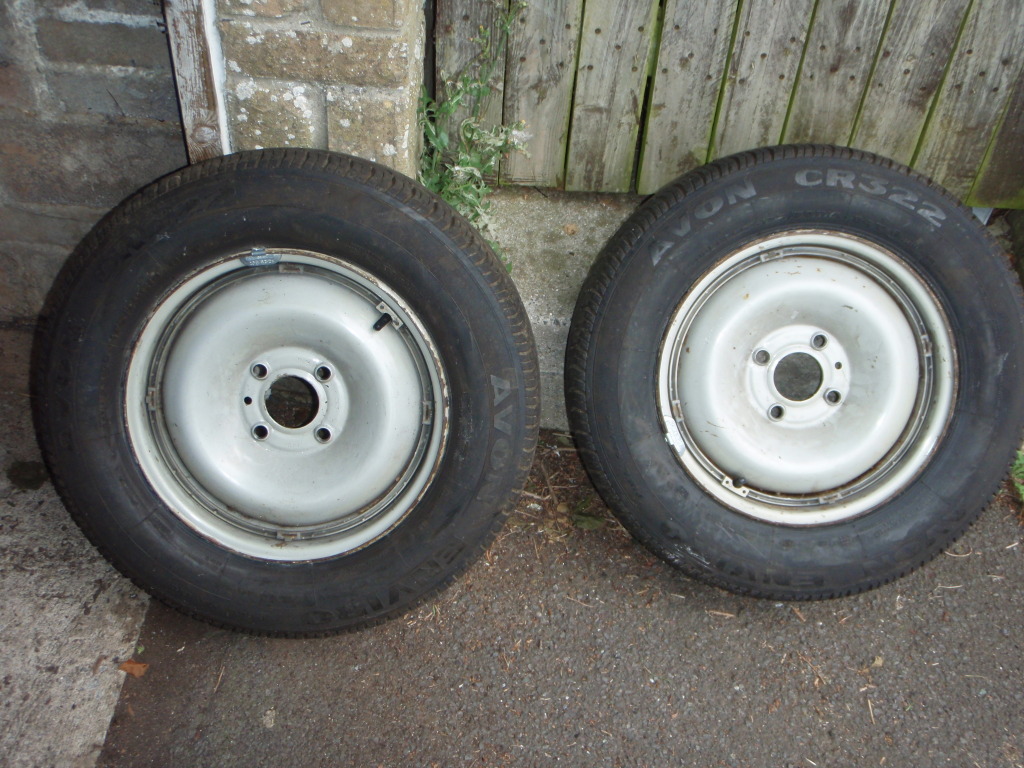 They look good from afar but the rims are awful up close. 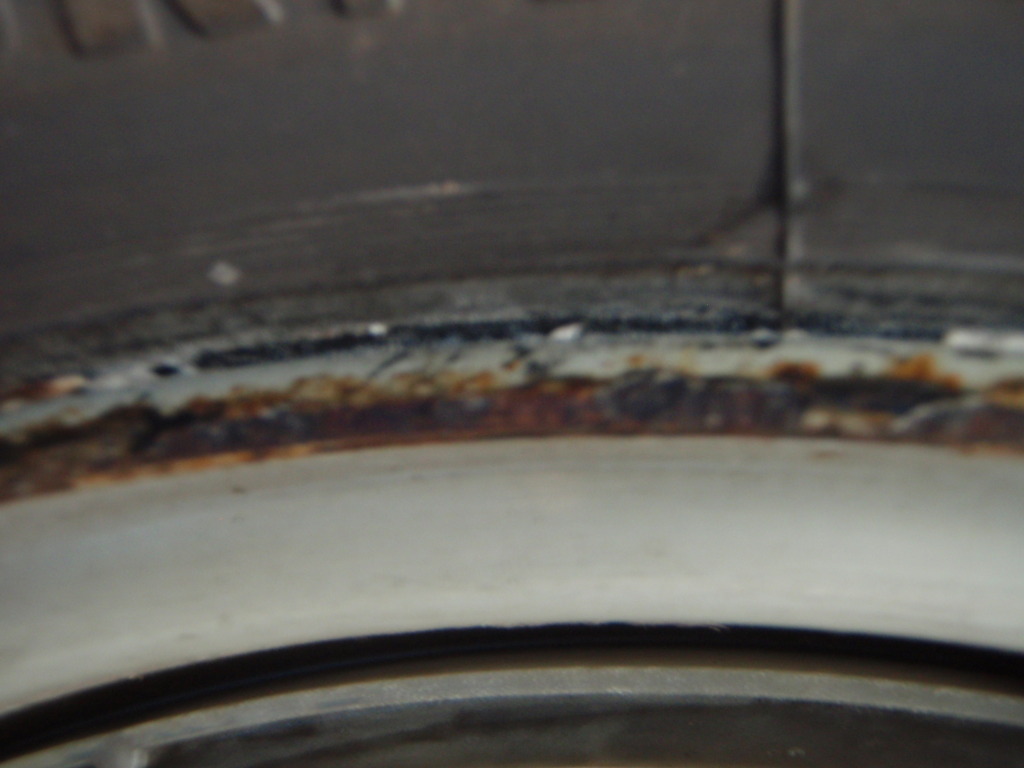 Now up onto rear axle stands, garage isn't wide enough to use the correct windy handle for the jack (from a ZX) so a screw driver makes a working albeit bloody hard work substitute. I do know it's not straight (quite good at that particular assessment) there wasn't a decent enough place on the passenger side near the wheel so had to put the stand on the axle just the drivers side of the exhaust. 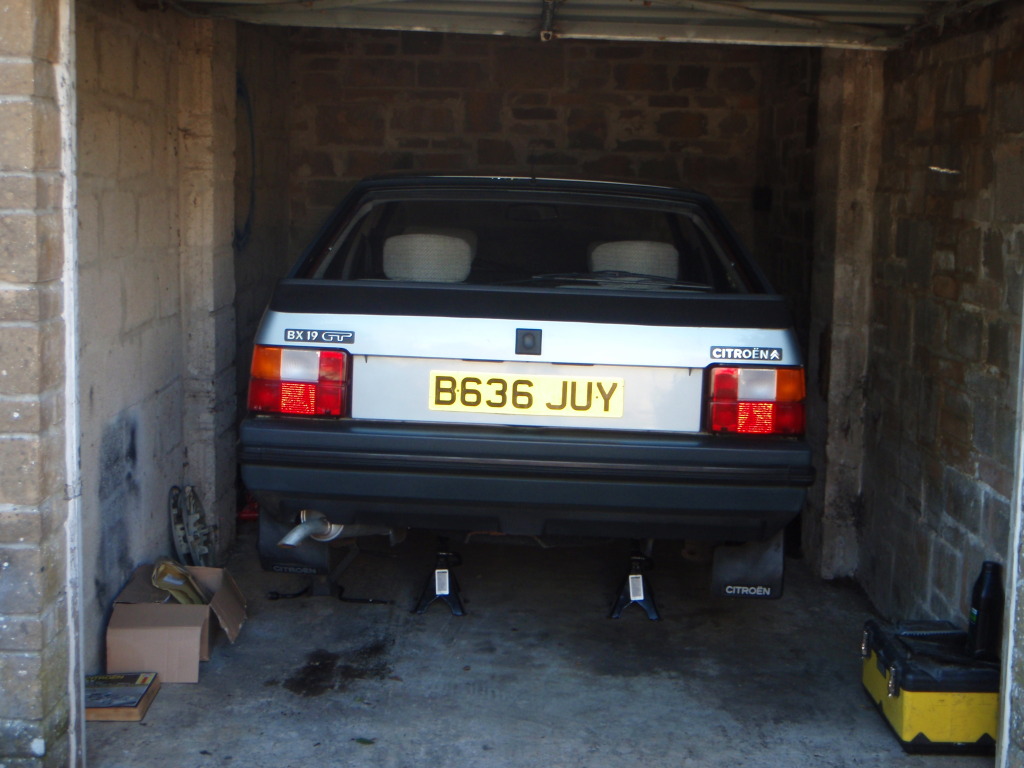 So all raised at the rear. Wait a minute, handbrake operates the front wheels. Dammit! Take car off of axle stands cos wheels keep on turnin... And it isn't any easier work on the way down using a screw driver either. Right, next I attempted to take off the wheel nuts. Note the use of 'attempted'. Two of them wouldn't budge, I bent and eventually snapped the ZX nut removal/jack windy combo tool. And then continued to bend my 4 ended cross shaped mutli nut removal tool, but after a lot of fucking swearing, sweating and generally getting more pissed off. They eventually budged with release comparable to that of an atom bomb and consequently I now have no skin on any of my knuckles - the method I used was to apply (considerable) body weight to one end of cross shaped nut tool and lift up with both hands on the other side hopefully achieving a synergistic torque effect but it meant I scraped all my knuckles across the concrete floor (there's a red mark and bits of remnant skin and everything) and very nearly fell face first onto said floor. But got the buggers loose. Jacked up and axle standed etc. Wheels off hurrah! 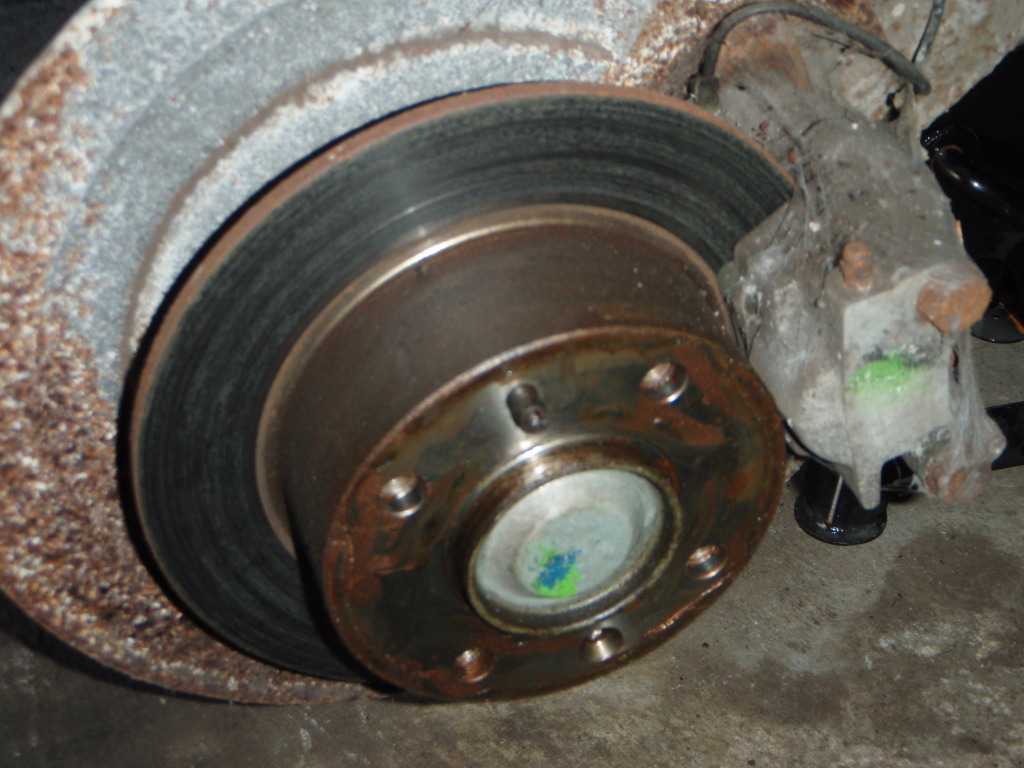 Couldn't see any pads, so I assume they are held inside the caliper's casing? 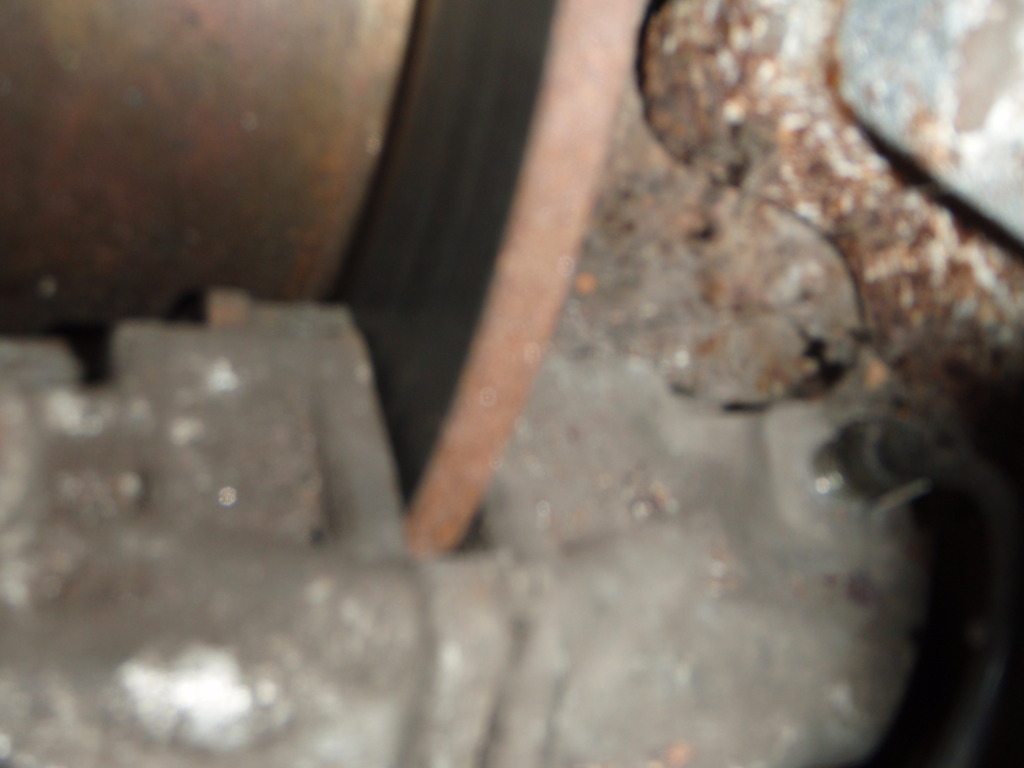 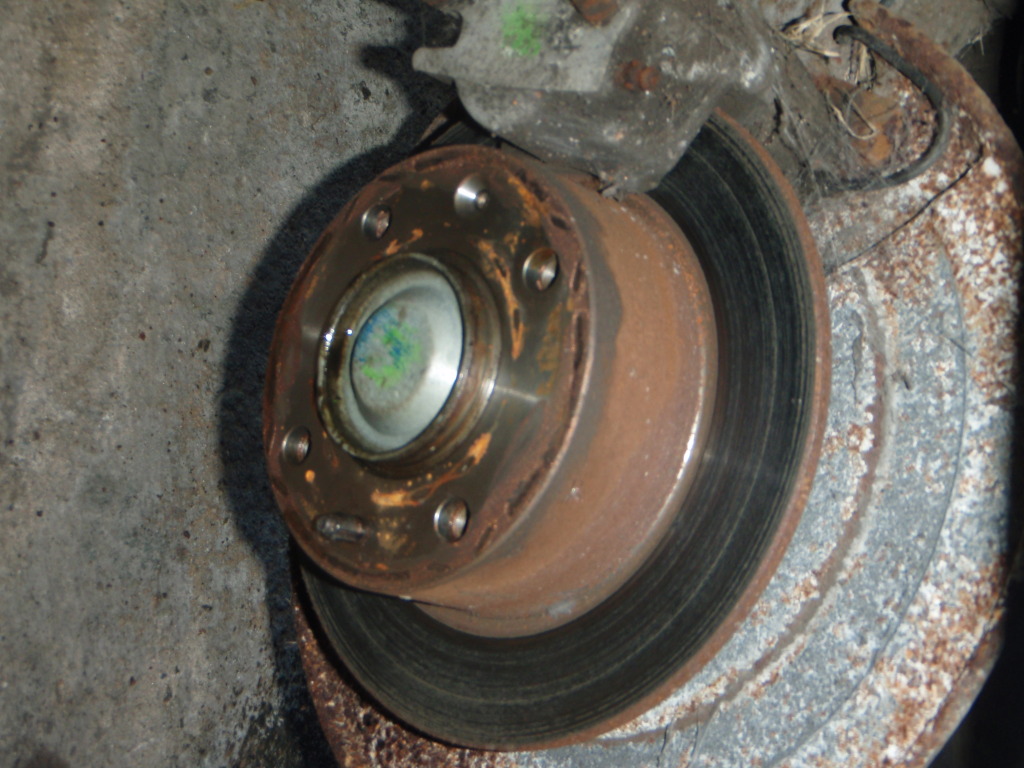 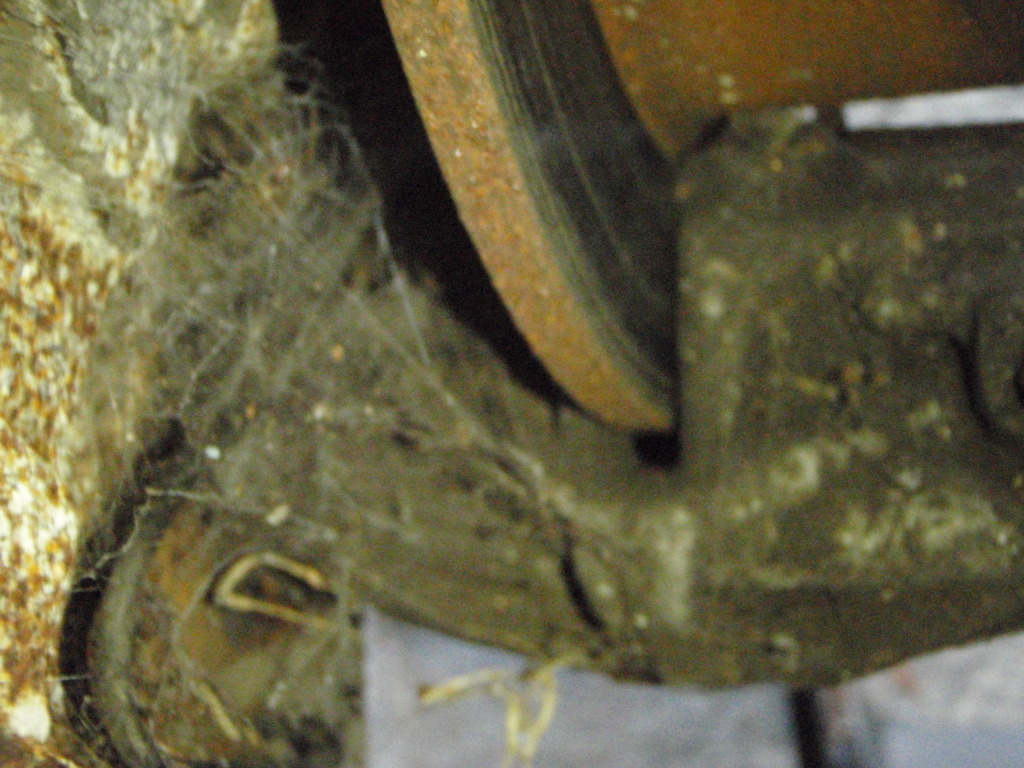 Doesn't seem to be a wear ridge on the rear discs so looks like i'll leave them for now.

Whilst I was here I had a quick shirt-lifting session. No rust under here! Shiny rear box exhaust section, solid exhaust hanger and mounting area, no signs of rust along the rear of the boot or anything. Phew, this was where I was thinking i'd find rust if there was any. 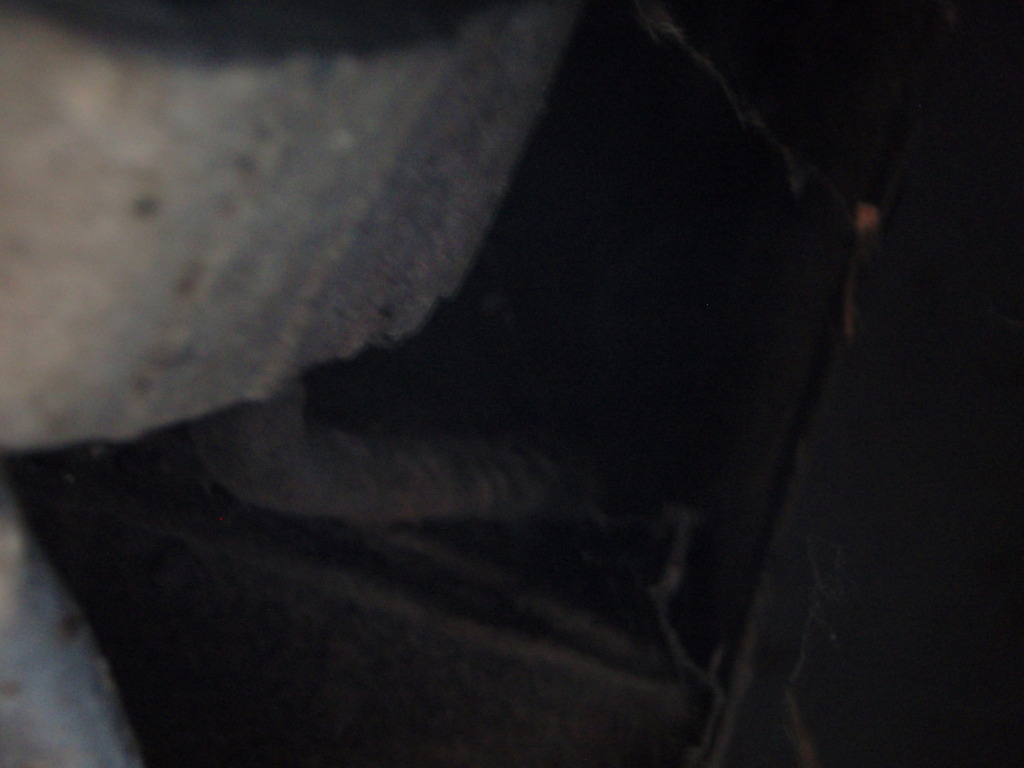 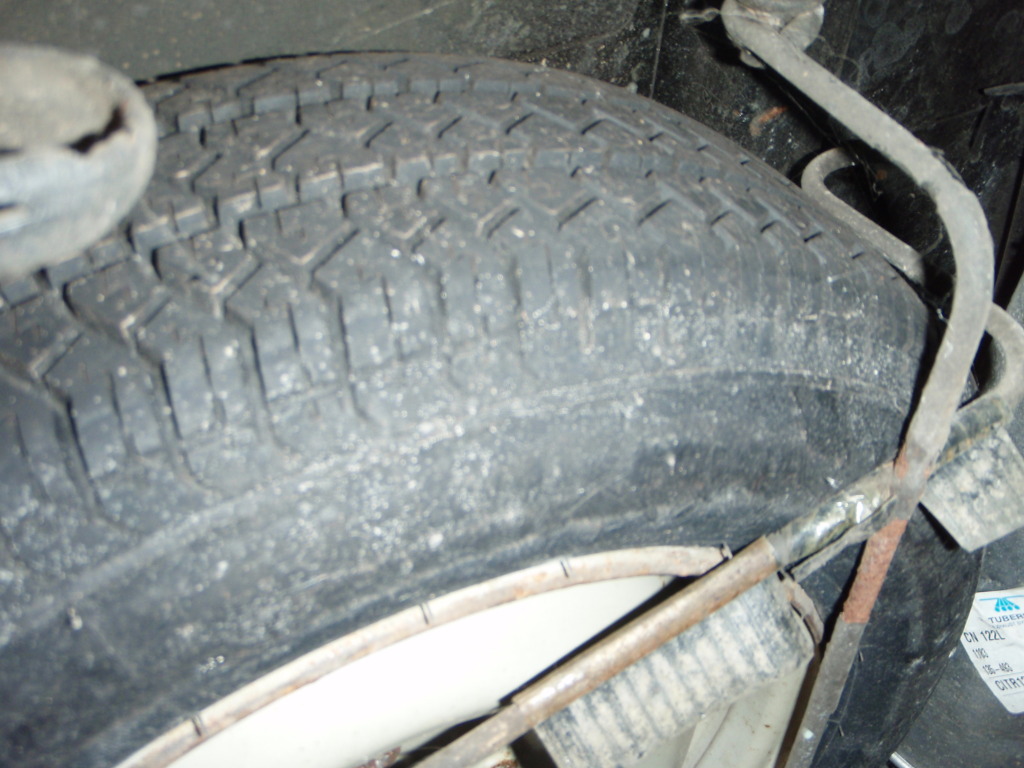 That's all for now folks, will get the rear tyres re shod this week. Looked at the spheres that were supplied, two are from 2008, two are from 2003 and there is a rear pair that are undated. Will the 2008 ones be ok? Then it's on to the really fun stuff, cambelt, oil change, spheres and an LHM change!
Happy BXing

The rear discs look fine mate, they dont work hard so i would leave them as is.
Lots of Motors, mostly semi broken....
Top

Good to see ya back Tom, you've been awful quiet recently. Sounds like you're settling in to the West country.
Diagonally parked in a parallel universe
1991 TZD hatch (Triton Green)
1992 Hurricane
Top

Yea we've been doing all that hellish packing and unpacking business. Seems stupid to go through everything, pack it up, put it in a van and drive for a mile or two then start the whole process in reverse! Still got stuff at our old place to go through and need to have a thorough clean. Tenants moving in Saturday so i've got all week, hurrah

Once the old house is clear I can start doing GT stuff properly, and when I have a job even better, I can then afford to do things like pay for tax and MOT etc.

Dad gave me a rather nice graduation cheque so i'll use some of that to get the GT roadworthy but I have told myself I cannot spend any of it until I have a job (except £30 for tyre fitting, don't like it on axle stands for so long). Might even use some to get the bonnet and front wings resprayed on the GT.

West country = awesome. Just a shame it's so far from the majority of BX and other interesting car minded people. Has anyone noticed that the majority of said people seem to reside in the midlands or much further north than Somerset at least?

In other news, I have discovered Fuelly and copied one page of my astra fuel data from the MK2 forum (2nd page of data always came up blank for some reason so no data between 2009 and July 2011). It's very interesting (yes, I am extremely sad) to see what other people are getting from their cars. Cheeky linky http://www.fuelly.com/driver/tomsaintjames" onclick="window.open(this.href);return false;

Back to spheres, would 08 and 03 spheres be ok to use? And when it comes to disc changing time, I suppose i'll have to drill the threads of the disc retaining screws out of the hub and re-tap it? For now the wheel bolts are securing the disc to the hub (drivers front only thank goodness).
I'm not a Saint, or a James, but a Tom Saint-James!

I'd clean up the caliper especially the bleed nipple & get some penetrating fluid on it, as you'll want to bleed the brakes once you do the lhm change. I'd also personally take the old brake pads out & re-fit some new one's, you'll find the bolt that goes through them will be seized & will probably need removing with some force with plenty of penetrating fluid as well. Not sure if the mk1s had dust covers or not? but again if they should it'd be worth getting some & whilst you're at it take the rear discs off & de-rust them so that when you put it all back together again they'll be spot on. I wouldn't try & remove the hydraulic pipe that the caliper is attached to, no doubt it'll break if you try to remove it, but again, clean it up & get some lube on it, just incase. Hope this helps