Do items listed 2 & 3 first, the rest you can do at your leisure.

Big speakers on the (surprisingly rigid) parcel shelf sound good, but you can loose quite a lot of boot space, so I have kept fairly small speakers here, and it sounds fine.

If you want more bass, easiest fit is a Clarion amp/woofer under the seat like Jaba has fitted.

I quite fancy one of these myself.

Mike E (uk) wrote:Clarion amp/woofer under the seat like Jaba has fitted

And me! Tom, you may want to have a read through the ICE Thread

Remember that the original (home) CD players are terrible at playing copied CD's, and i suspect a 30 year old car CD player will be just as bad.

I'll have a gander, thanks Matt. In my (future) mk2 I would quite like some really good quality noise, but in the GT i'm feeling a bit conservative - some good direct replacement speakers, and a decent retro-looking head unit whether it be CD or just cassette - would do me fine.

I s'pect you're right Vanny, i've heard before that high-speed burnt (home made) CD's are difficult to read or not read by CD players of this vintage. Might juat stick with the cassettes then! Or buy an MP3 player.
I'm not a Saint, or a James, but a Tom Saint-James!

Had a phone call half an hour ago from the bloke who was supposed to be towing the trailer for the GT today, that he couldn't do it because the car he was going to use was a mates, and is off the road (for 3 months now). The time and date has been arranged for pick up since mid February! And he calls me 2 and a half hours before pick-up! Bloody idiot.

Apparently another 'mate' of his could drive it to my garage on trade plates tomorrow after 3pm. But i'm worried about the cambelt not lasting 30 miles, and the tyres are all perished and all have slow punctures. So, now i'm calling everybody I know with a big enough car to tow it, as the bloke said I could borrow the trailer. Results? No-one. Last resort is one of Steve's uncles, but it's his eldest sons wedding this evening, even though they're on a cruise ship (the couple by themselves that is) but i'm a wee bit desperate now.
I'm not a Saint, or a James, but a Tom Saint-James!

All is not lost, IF I can get hold of Mark (the seller) and arrange pick up in the next hour, or at the latest before 3, then Steve's uncle can do it for me!

Just got to get hold of Mark now...
I'm not a Saint, or a James, but a Tom Saint-James!

Oh noes, saw your post on another thread and came to check in here to see what the update was.

Really hope you're not reading this the instant I submit it and are en route to fetch the GT now!
Diagonally parked in a parallel universe
1991 TZD hatch (Triton Green)
1992 Hurricane
Top

Dont drive it Tom, its not road legal UNLESS its being driven to the MOT station.
Lots of Motors, mostly semi broken....
Top

saintjamesy89 wrote:There are a few things I may want to change with the GT *ducks*

Backbox, I don't like the look of the current back box's tail pipe, so may employ a 16v type one. Nothing that is chrome or flashy or most of all noisy! (don't worry Tim, i'm looking for tasteful and subtle changes)

Air filter, I may change for a k+n type, but will see how it sounds without first, as the amount it will be used, the K+N type will probably be more maintenance than a paper one.

I know most say it's not worth it, but i'm forever the optimist, so will be fitting 'performance' spark plugs and HT leads.

The interior speakers will be upgraded, I don't know what size they are yet but I have some very good, direct replacement Pioneer speakers in my astra (4" in the front dashboard and 6x4" either side of the parcel shelf), so i'm thinking similar things for the GT.

Depending on how it drives, I might get the carb tuned, and if there is capacity for it (which I believe their should be) to increase fuelling for a bit more power, BIG maybe this - don't want to ruin a car that drives nicely.
(had the astra tuned down this way for more MPG)

THE K&N filter makes it more noisy and doubt will make it much quicker, the Mk1 have a different kind of air filtration to a Mk2 so not sure if it will fit either. Personally I think these "performance" leads, plugs and filters are pure hype, and a waste of money on a car like a BX petrol, but your car to do as you wish and it cant hurt!

I wouldnt go cutting ANY holes in the parcel shelf or door panels for speakers, this is a VERY rare car, and interior bits for Mk1's are laughably hard to get hold off. You will have one "bass" speaker behind the dash and two tweeters in the top corners of the dash under the grilles (nothing in the doors as standard), You could always change these for modern units of the same size.

I do have a spare grey Mk1 Parcel shelf you are welcome to FOC to cut about, its faded but may be of some use.

if the carb is ok LEAVE it alone!!

Its very well documented how solex's can be a pain the arse so if its behaving as it should (as mine does on the GT) then dont touch it....
Lots of Motors, mostly semi broken....
Top

Roverman wrote:Dont drive it Tom, its not road legal UNLESS its being driven to the MOT station.

It is if it's on trade plates.
CCC BX monthly column writer bloke thingy - bx@citroencarclub.org.uk

Oh crap, If only I was nearer we could have used the trajet to collect it, hope you get sorted mate
1991 BX Meteor 1.6

Phew, got it at last! Mark phoned back last minute to say he was at the garage already, so me and Steve's uncle hopped in ou r cars got the trailer and fetched it, we got him back just as his son and daughter in law came on the webcam.

To answer some posts;
Lol, I had no intentions of letting someone else drive it 30 miles on trade plates, one look at it in it's dirty and perished tyre state would attract the police. And the cambelt would have me worrying constantly.

Calm down Tim, I ain't going to be cutting anything up, as I said I will be replacing speakers of the same size as are already in the GT, the 3 in the dash and the two in the rear upper headlining corners will be replaced with modern high quality direct replacements. And we'll see about the noise, I may decide it's throaty enough as it is - it won't be a performance mod by any means. I like carb'd engine noises!

Carb seems to be running spot on, so like you say i'll most likely leave it alone with a future recondition pencilled in. 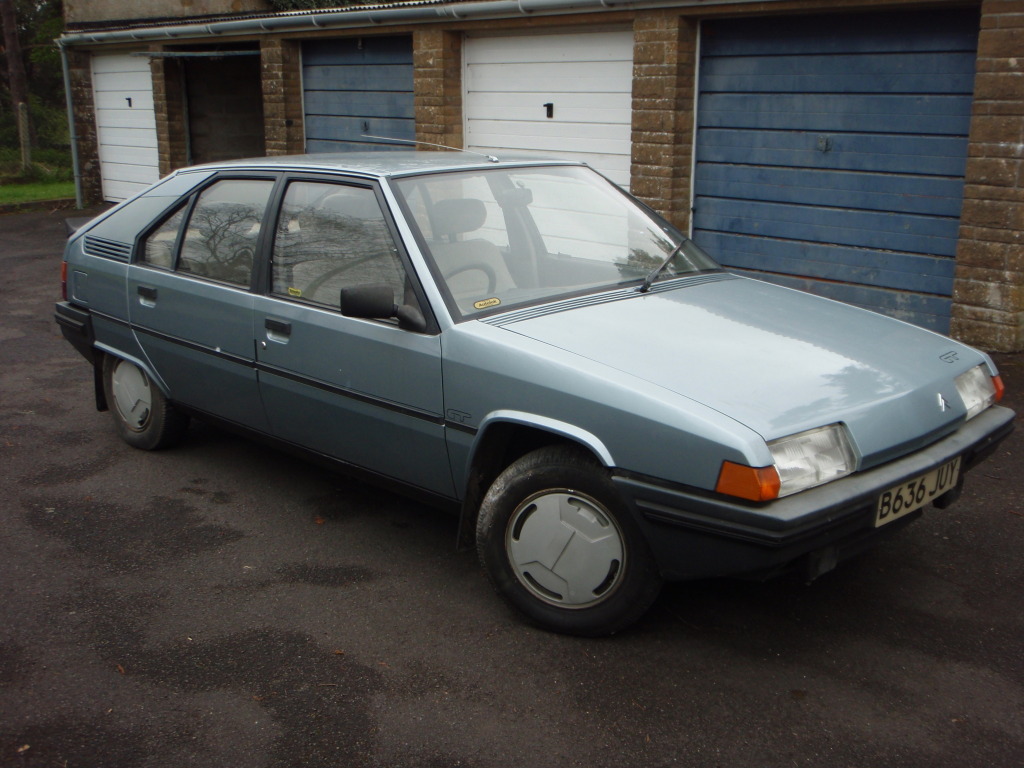 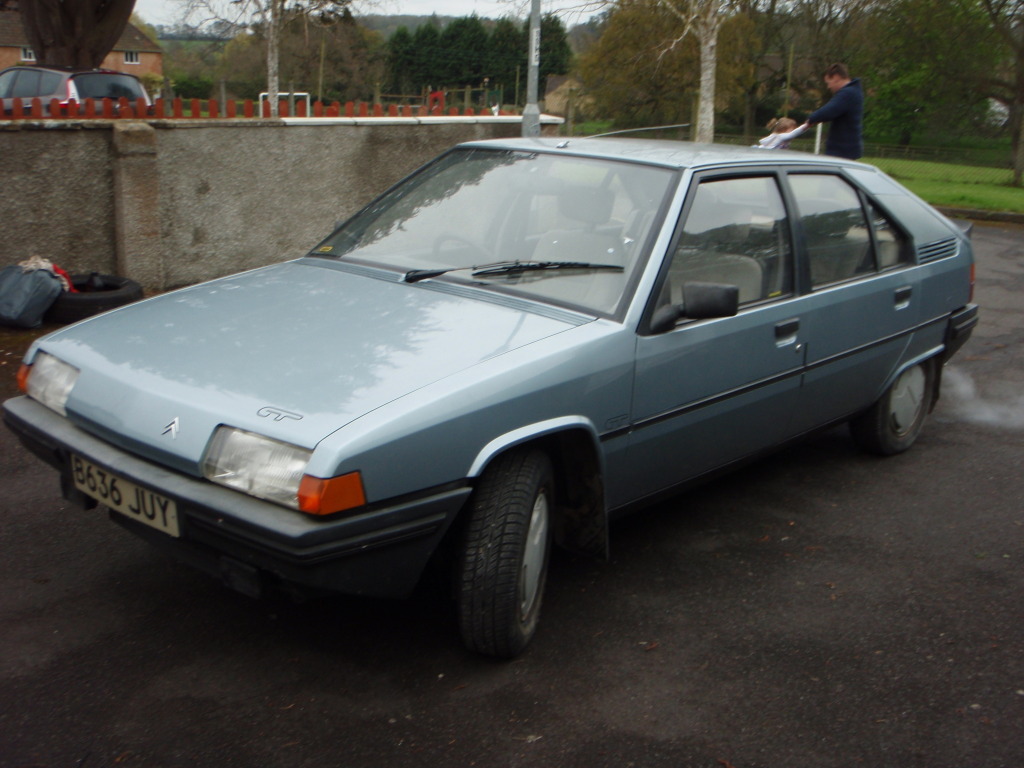 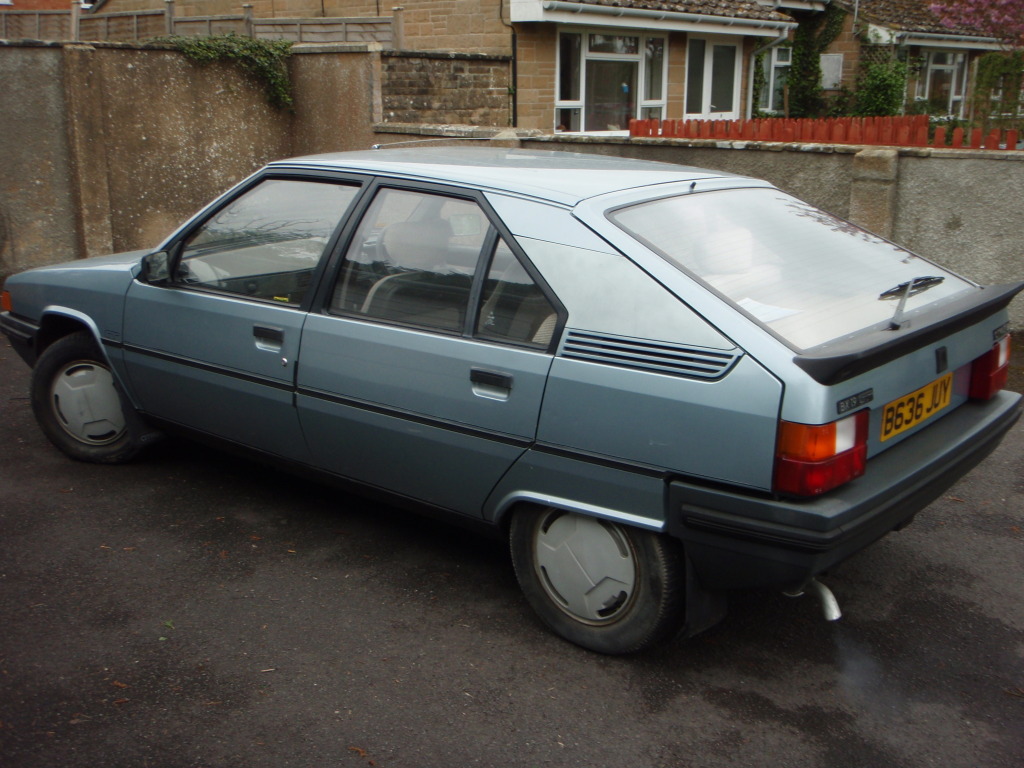 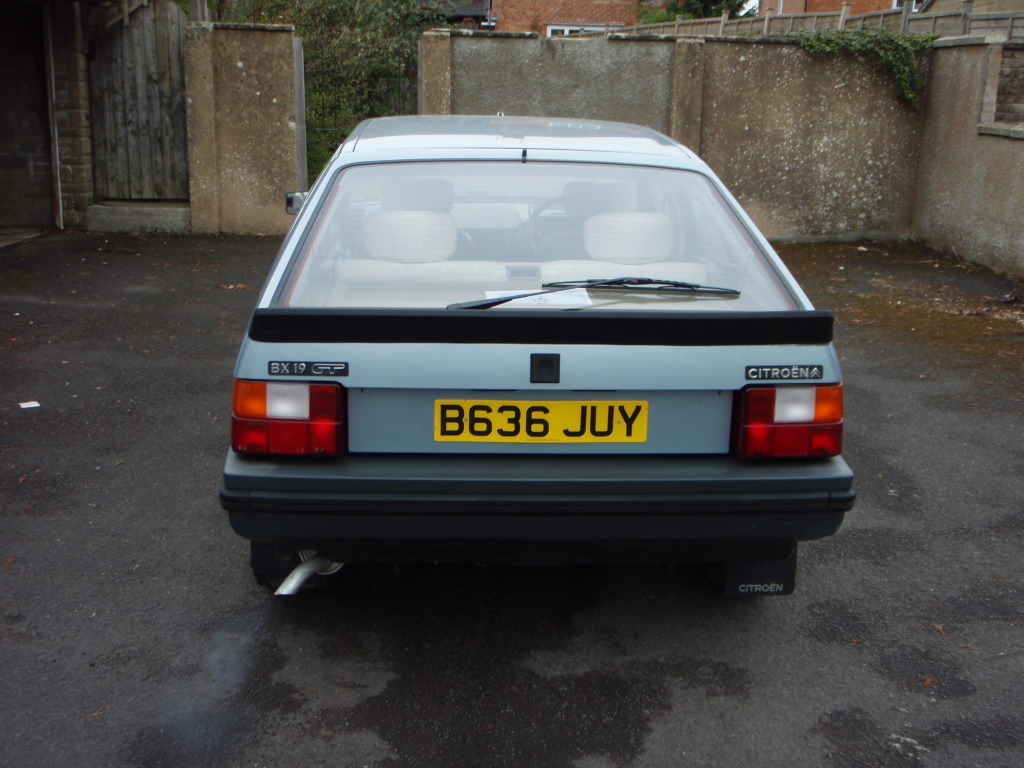 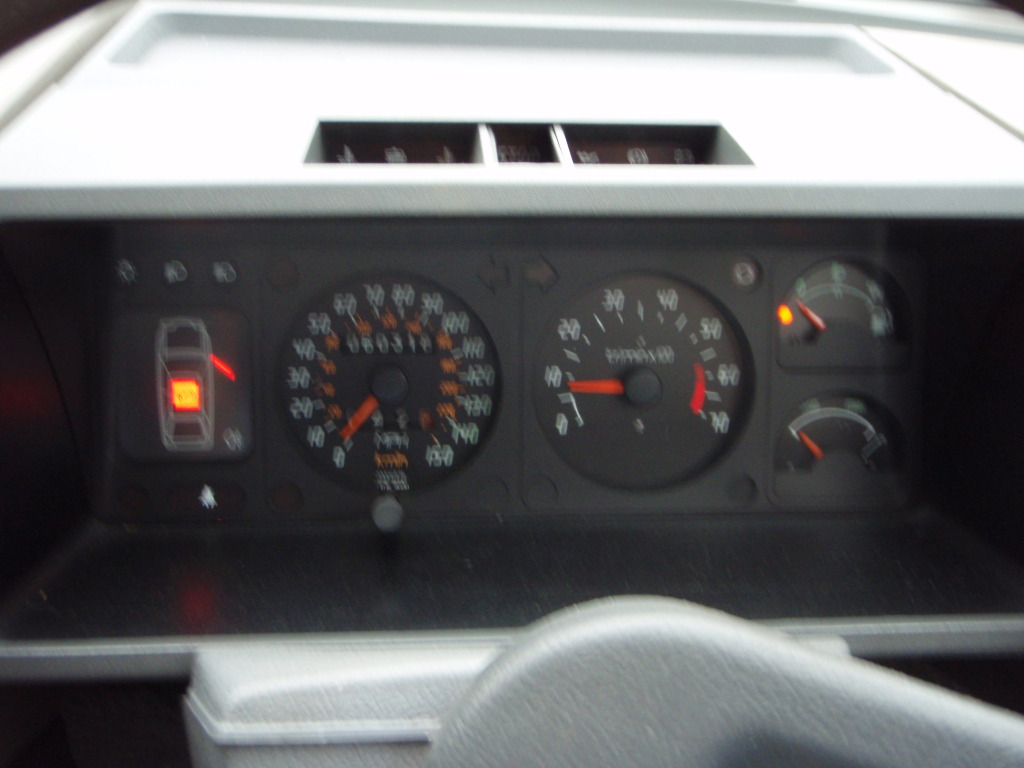 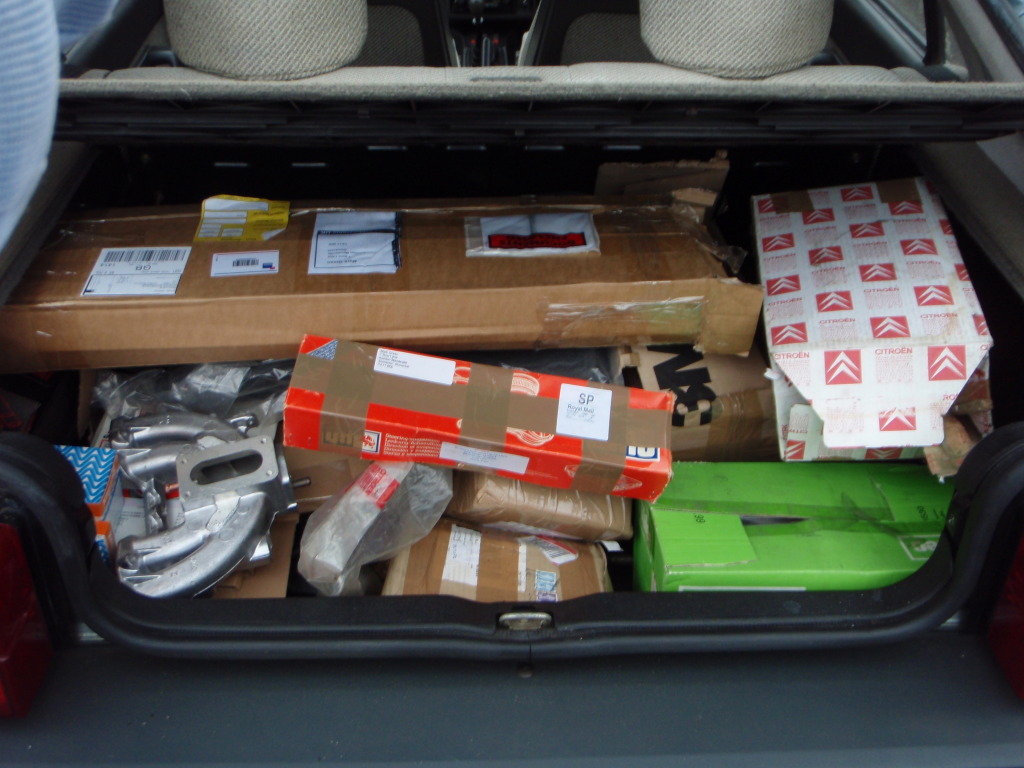 How was it?
Started on the button, 2nd revolution of the engine. Perhaps partly thanks to it's extra-super-dooper new battery. It's misfiring, and a wee bit tappety, but I plan on replacing all the ignition components anyway and doing the obvious oil change etc. It was a bit hesitant, but expect that is due to a slight blow to the exhaust manifold as has been mentioned before - difficult to tell. Heater fan only works on full speed, so will have to investigate that. HP pump or belt is squeaky when car is rising or when you dab the throttle, my 14 did the same even with a new belt, so maybe the HP pump bearings need some lubing?

I ran it until it was hot, as in hot you could feel, but after 25 mins or so the fan hadn't come on and the temperature light hadn't come on either - even though it was hot under the bonnet. Don't like not having a temperature gauge, so I may fit a discreet aftermarket one somewhere. Really don't want to ruin the engine by overheating it! I checked the coolant level btw before I started it and it was at max.

Suspension, after some citroebics was very smooth, hard and tired spheres, but the whole car rose and fell as one, instead of front first, then back. On tick over, it took ages to rise, and if you dab the throttle it would rise in spurts (at the same time as you dab the throttle - quite funny!) but fell quickly with an audible whooshing noise.

Brakes, clutch and gears all fine. Had to drive it for half a mile down a dead end country lane where the garages are, there was no way the trailer was going down there! So got to road test it for a short bit, was gentle because of it's unused state and cambelt fragility.

Bodywork;
Very dirty, and not just dirty but a bit greasy, needs a proper shampoo - tried to give it a wipe but just made my cloth exceptionally dirty with no effect on the car!

It seems to come with much more than I expected - literally a whole boot full of stuff, and 4 as new Avon tyres. I will have to make a list of what it came with at some point.

Really really can't wait to get it up together. I think it will run very very well when it's been serviced etc, and the paintwork looks like it'll come up lovlely - interior is very nice too. As you can tell, i'm quite smitten!
Last edited by saintjamesy89 on Sat Apr 28, 2012 9:04 pm, edited 1 time in total.
I'm not a Saint, or a James, but a Tom Saint-James!

What a stunner - congratulations, bet you can't wait to show 'er off.

Glad it all worked out today after the heart-stopper this morning!

Now get back to your revision, you can play with your new toy later
Diagonally parked in a parallel universe
1991 TZD hatch (Triton Green)
1992 Hurricane
Top

Caffiend wrote: Now get back to your revision, you can play with your new toy later

Thanks, she does look good, eh? Will look even better when all shiny like!

I know... No.2 of conditions agreed to in allowance of me buying this was that it doesn't get played with until after exams are finished.. It's going to be difficult.

'I'll just go and start it before I start revision this morning' and then 'ooh, whilst i'm here i'll just...'
I'm not a Saint, or a James, but a Tom Saint-James!