As far as timing dowels go, where would I get some? Or is there another way to stop the engine from rotating whilst you're changing the timing belt? Doing the belt is kind of a mental block, I don't have the tools to do it at the moment and i'm worried i'll break something if I try without them.
My plan is to use a breaker bar to break the tension in the crank pulley bolt, then use dowels/drill bits of 10mm size (got the size from the how to guide by Brian aka BXmeteor) to pin the cam/crank pulleys.
Do I need to do the tensioner and water pump? If I had lots of time and a decent place to do it, then I probably would, but time is fairly tight and so is space where the GT is, so I may end up paying for this to be done.

Funds from the astra mean I can get cracking with stuff, can get those few bits on the TXD done too.
I'm not a Saint, or a James, but a Tom Saint-James!

I've more or less decided to pay the garage to do the cambelt. In time i'll be confident enough and have the tools to do it myself, but time at the moment is lacking!

I've started sorting and selling off all my Astra MK2 stuff, to get funds to help the GT along. I'd really like to be able to drive it and get to some shows this year, especially the Bristol classic show, and maybe the X rally before.

Good news is that my training at work is almost done, and next week i'll be starting the shifts, which are 7am-3pm for two weeks and then 10am-6pm for two weeks. So next week, i'll be spending the afternoons doing GT stuff, maybe some work on the TXD too! I picked up the spheres today, to get the pressure tested on Monday, at the same time i'll pick up/order some LHM for the complete flush. The other plan Monday/Tuesday/Wednesday is to do engine/gearbox oil and coolant changes. I can't wait, it seems ages since I spent any time doing car stuff

I had very good intentions and stuff, but everything seemed to get in the way today, so I got bugger all done. I finished work half an hour late (half 3) got home by 4 and got changed etc, got halfway to the garage before I remembered any stuff I needed at home, so went home to pick said stuff up - except I couldn't find the full petrol can anywhere. Picked up some oil on the way, which ended up taking 15 mins (eurocarparts, crap customer service - they're much better at trade customers). So I didn't get to the garage until quarter past 5, it was dark, I had to be home by 6 for a mortgage related conference phone call (we're reviewing our mortgage after 2 years of the original one) and I had no petrol so couldn't do anything!

One thing I did do was to put some trim wizard blue-gelly stuff on the front bumper, to much improvement. It was rushed, and roughly done and I only did it so I felt like I had achieved something - but it will be nice when i'm at the stage to do some detailing, do all the plastics with this wizard stuff and wax/polish etc. 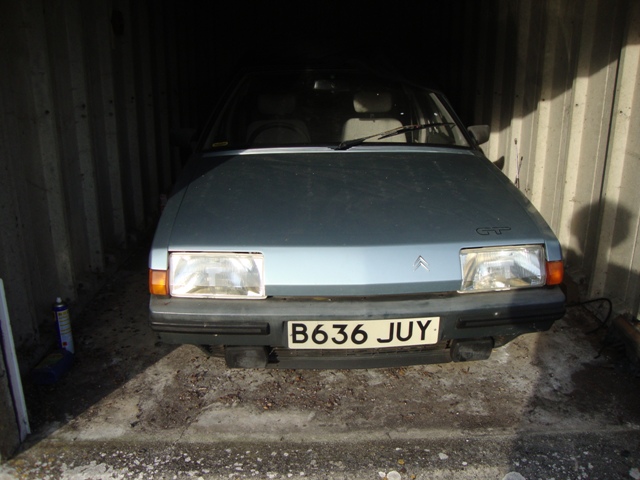 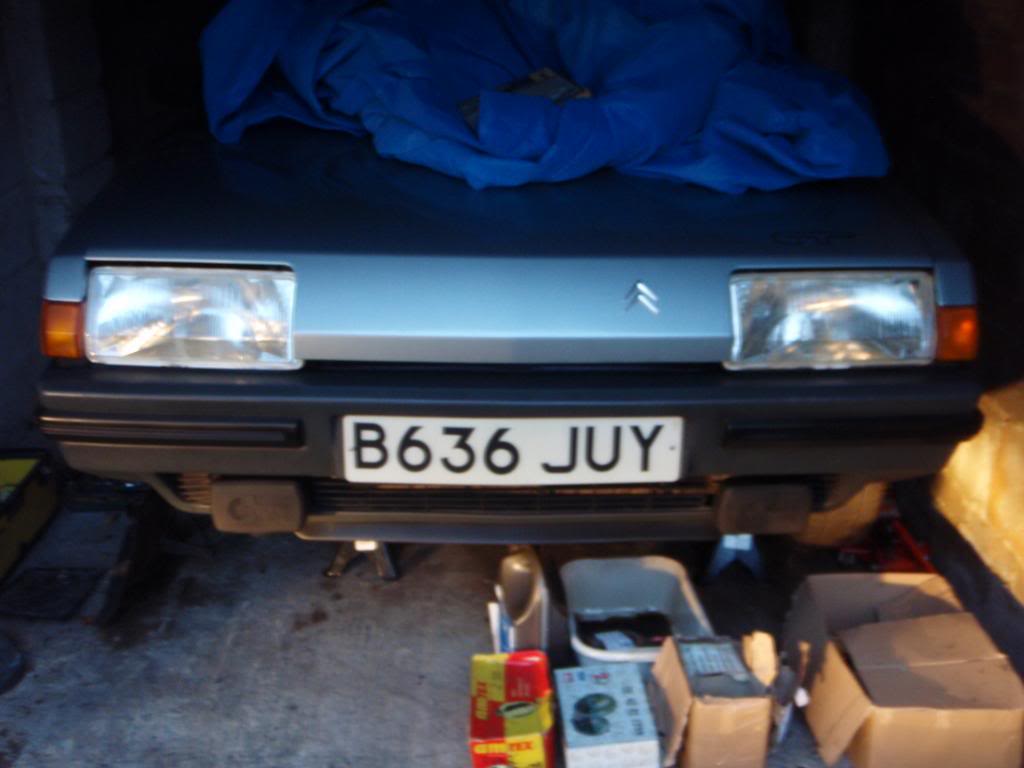 Didn't manage much today, in 2.5 hours all I managed to do was to get it off the axle stands and put the alternator + HP pump belt back on and then fail to get it started.

Until tomorrow, I might get brave and suck on the fuel hose just to check fuel is getting through, does petrol taste nice?
I'm not a Saint, or a James, but a Tom Saint-James!

Hello all, I realised that there was no spark today. Had to accost someone just going into their house to watch the spark plug while I cranked! Only tested cylinder 1, fuguring even if all the others are working, i'll want to fix the problem anyway. The plugs, HT leads, dizzy cap and rotor arm are new (last september) so it has to be coil or ignition module, surely? I had pencilled in a new coil anyway so don't mind too mutch. Off with the coil and ignition module, so I can find new ones. Hopefully they won't be too expensive as i'm quite skint this month (and probably next month too). I also put two new front spheres on, the old ones came off without any fuss (thanks to my new sphere tool I got in the post today

) will have to wait until she's running to do LHM/coolant changes though. 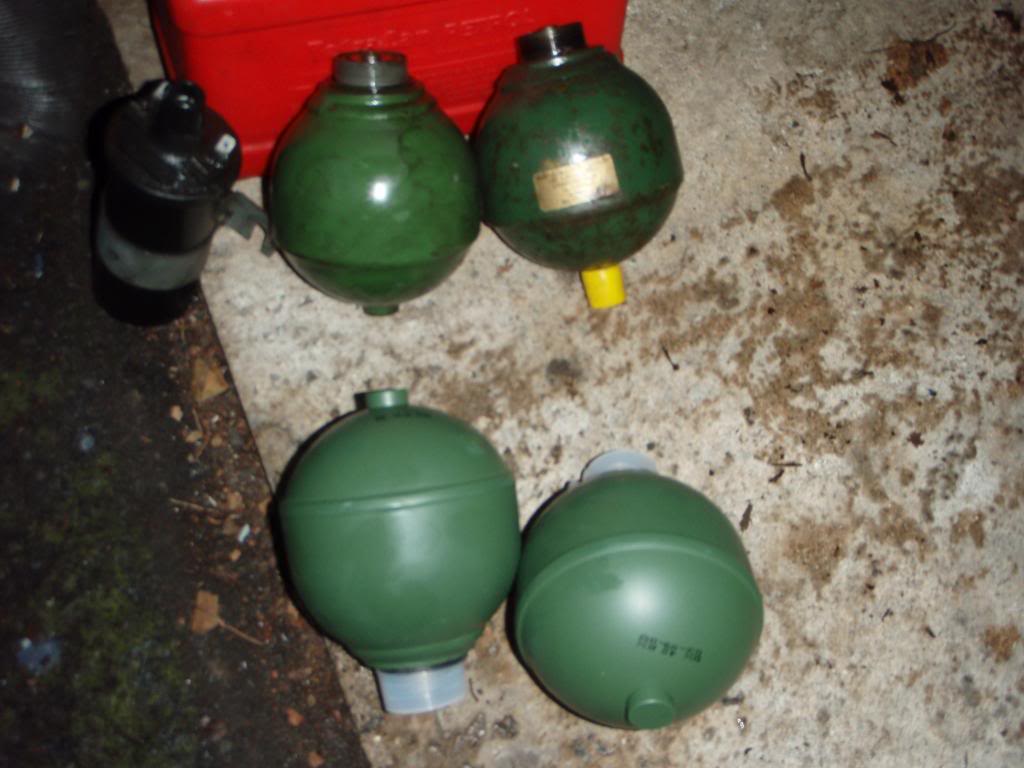 New and old spheres, the new ones came with the car and are stamped 06/2008 so hopefully they'll be ok! Old ones were rusty and very flat. 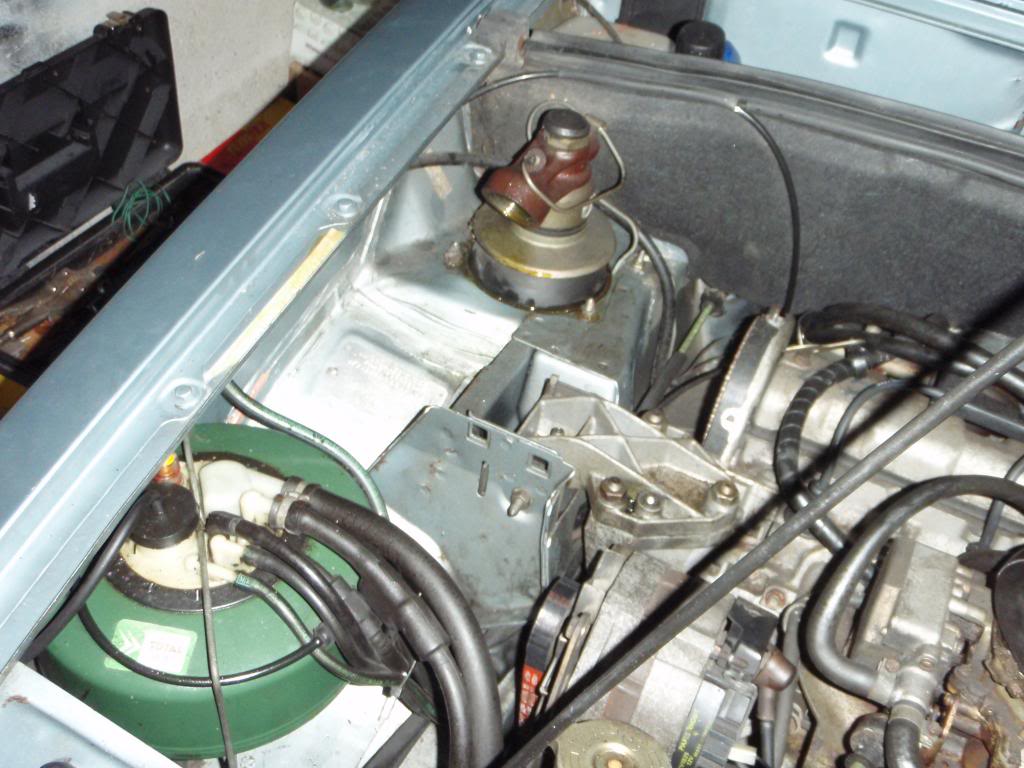 This one came off by hand, was fairly loose, perhaps a factor in why the car was never very quick to rise? 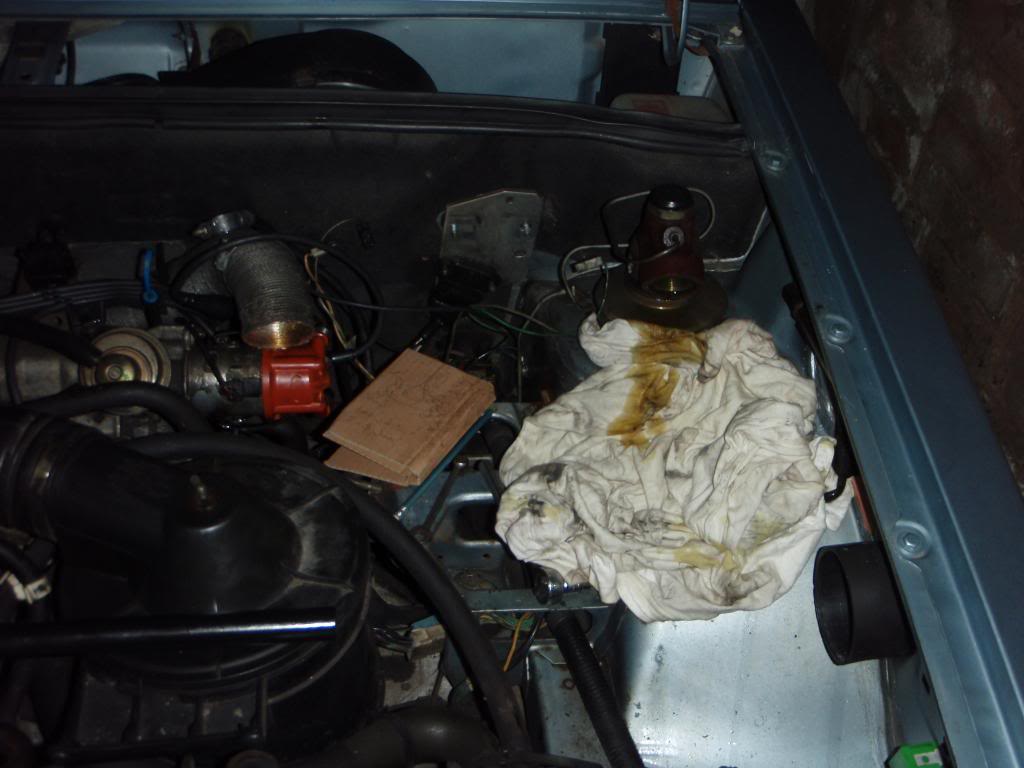 Mmmmm, yellow LHM! The state of this may make me go for some hydraflush when I change the LHM if it's any indicator of the rest of the LHM. 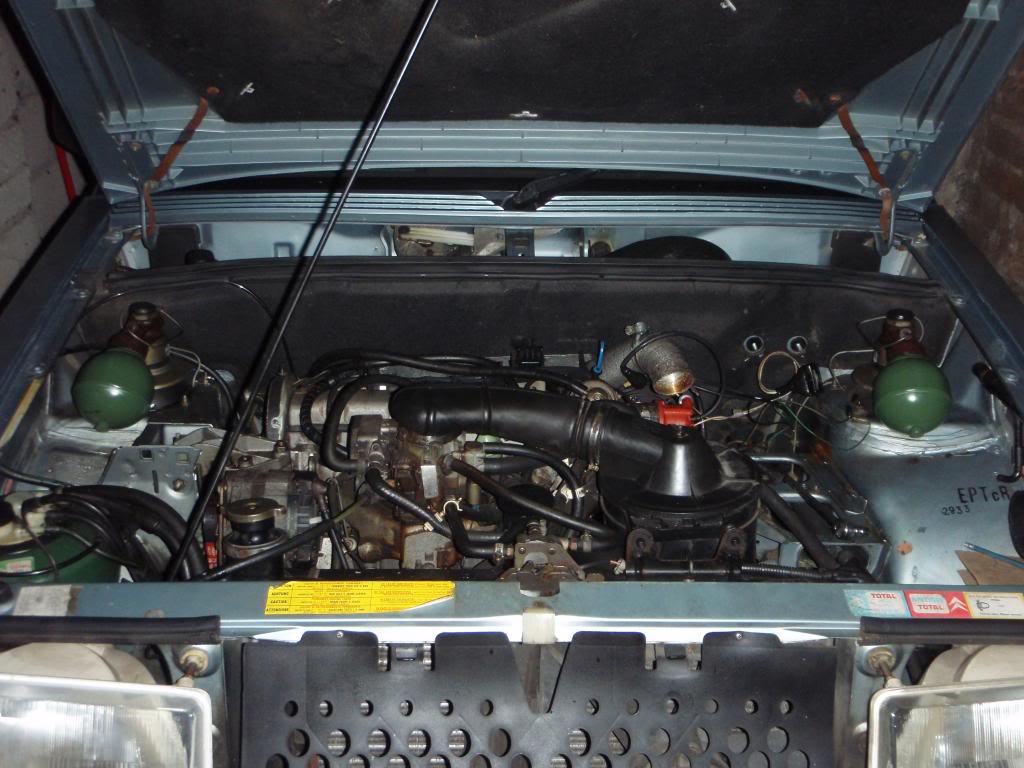 Tomorrow, I may change the oil with it not running anyway, don't really need it running to do so - I just like to know all is ok after a change. I'll have a go at the rear spheres, and maybe even the C pillar windows as I have some black silicone (bought for the TXD sunroof, but it hasn't leaked for a while, even with all the snow and rain we've had). Really want to get it running, after doing so and doing oil/coolant/LHM and the rear spheres it's MOT time (not forgetting getting the garage to do the cambelt and exhaust manifold gasket).

Topped the 50mpg mark in the TXD this tank, only by 0.3 though. But it's just so difficult to not back off when the turbo kicks in, should really keep it off boost for economy, but boost is just such fun

You'd know about it if loose spheres were causing a problem, as there would be rather a large leak. Best guess would be a tired pump, but I wonder if old LHM might not help. I'm guessing it deteriorates by molecular shearing so will get thinner over time. So although it will flow easier through pipework, more will leak back through the pistons in the pump and hence might take longer to build up pressure?

Personally I'd wait until you get it started before changing the oil - it will be thinner when warm and more of the crap will be insuspension within the oil, rather then sat at the bottom of the sump.

As Mat says, better to do an oil change after the engine has been run up to temperature - though you obviously need to bear in mind that the oil will be warm when it comes out.
www.classichub.wordpress.com
Top

...and that if you're a cheapskate and use an old oil container with a hole in the side to collect the oil, this can backfire on you. Picture the scene several years ago - I'm changing the oil for someone as a favour, on their driveway. I didn't have my catch tray with me, so I cut a hole in an empty oil container, drain the oil into it, then refill with fresh. Then I slide the cut away container out from under the car, and lift it up horizontally to pour it into the now empty container the new oil came out of. Only it has now gone all floppy from the heat, and whilst the handle remains horizontal, the rest of it flops down and deposits 5 litres of dirty old oil all over the block paving.

I think they got a garage to do the servicing after that...

Luckily for me, I'm really lazy, so tend to drag the container out of the way and then forget about it for several days. The only issue with this technique is the ability drop things into your tub of oil... It stops things rusting at least!
www.classichub.wordpress.com
Top

I do exactly the same Ian! But for quite a bit longer than a couple of days...

Got some more done on the GT today, put the new rear spheres on. Had a bit of a dilemma, I remembered something about not jacking the rear up to do the change beacuse you'd end up breaking something. Well, with a non running car what was I supposed to do? I ended up jacking up the front and back of the drivers side, then taking off the passengers side rear sphere vica versa. It worked but I was really worrying about the amount of jiggling about the sphere holding arm did, luckily the spheres came off really easily. I did have a feel about when it was totally jacked up, and the spheres wiggled about much more then than when they had the weight of the car on the wheel. 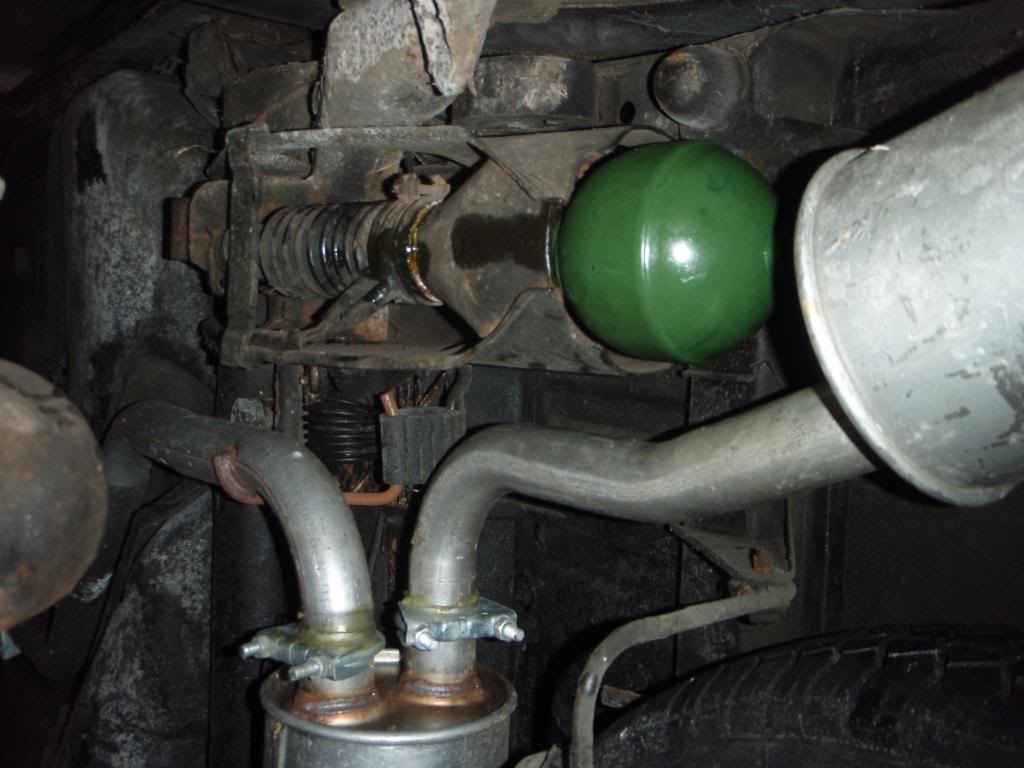 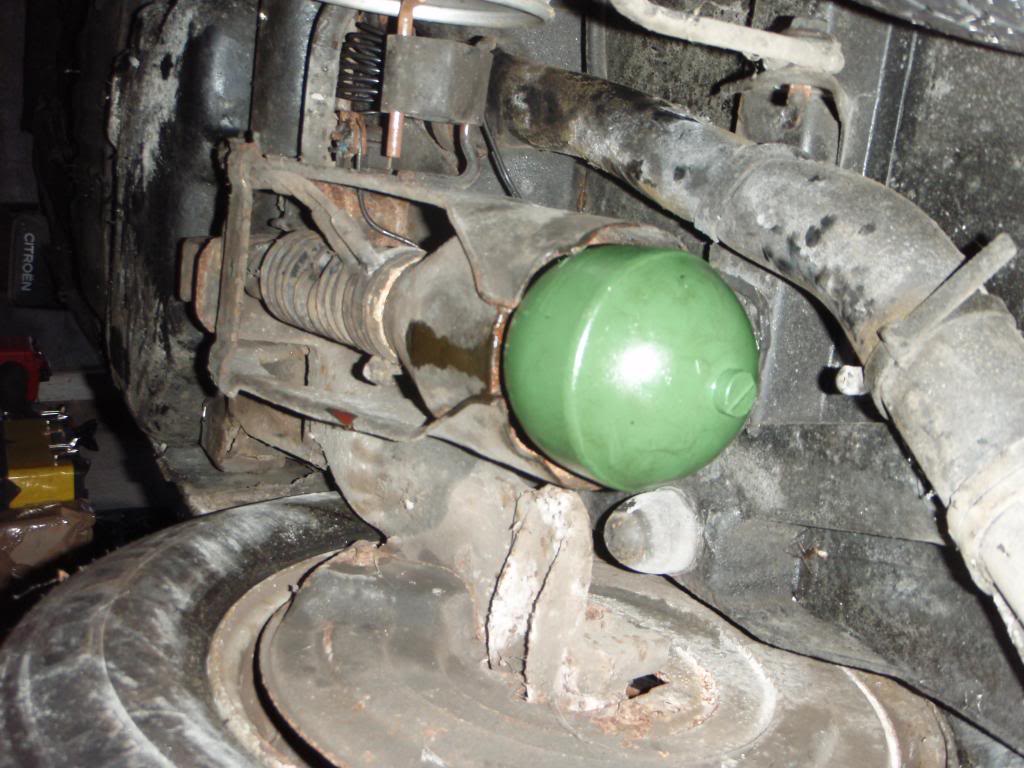 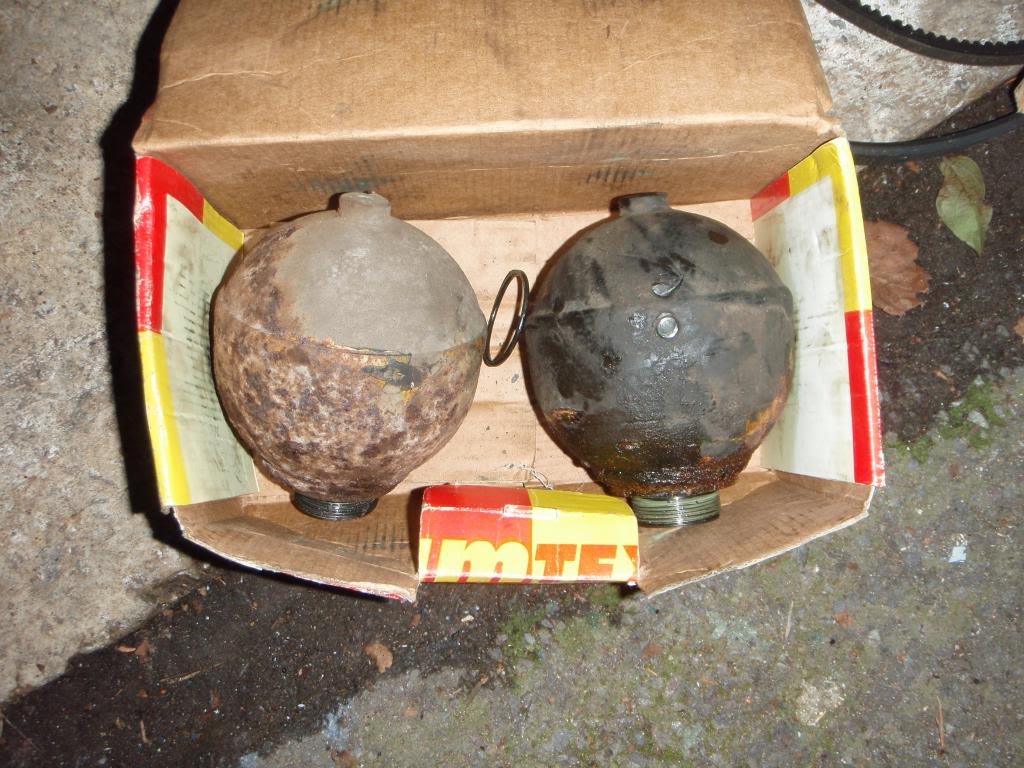 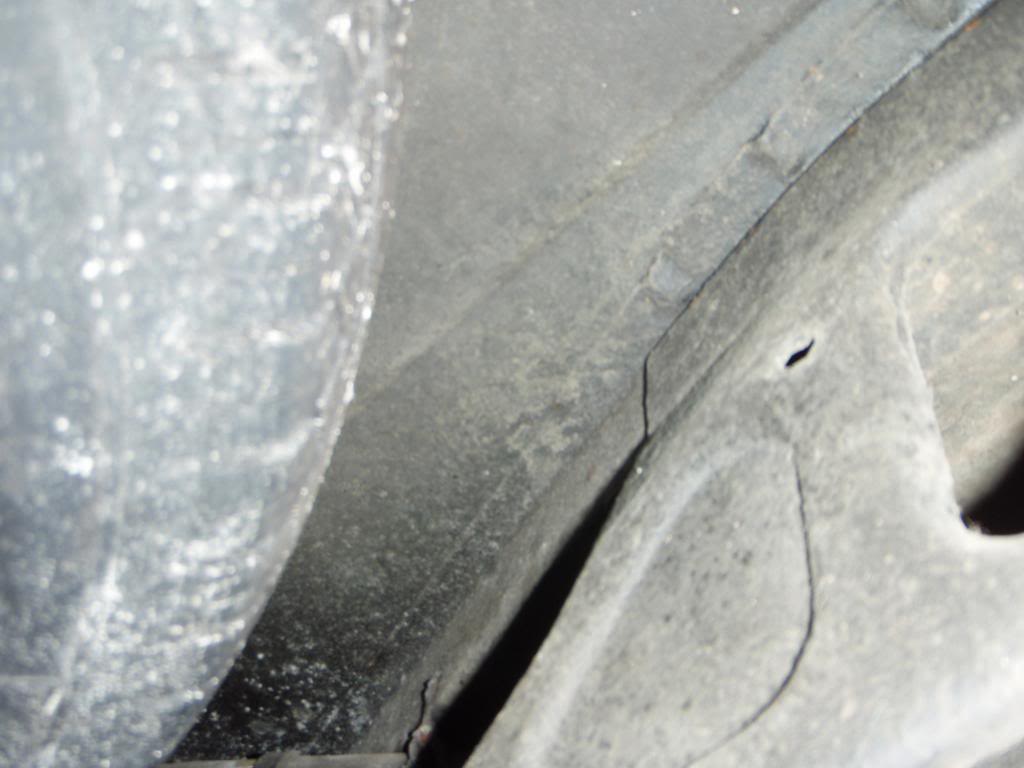 It all looks rather solid under here, the exhaust hanger is fine with only a smattering of surface rust, and up under the rear bumper looks solid too. Not surprised, even one of the spheres is waxoiled! I'm crossing my fingers with these spheres, they came with the GT and the newest one is dated 2008 though all are 'new' and boxed.
I'm not a Saint, or a James, but a Tom Saint-James!

With the rear sphere stuff, they are supposed to move right? I didn't break anything?

I have been looking for IM and coils, and have found this for an IM, mine has only 6 pins and all the ones on ebay have 7, would this be an issue?

Also when I come to make up new wires for these bits, do I need to use special wire, or just a certain thickness/rating? I'll get 4 different colours to make it easier to know what goes where. As I can see, the wiring in GT uses only 3 different colours, 2 being the same dirty white.
I'm not a Saint, or a James, but a Tom Saint-James!

Regarding the spheres, the struts/cylinders they screw into will move if the weight of the car isn't on them - the danger being if you apply a load of force the feed pipes will just twist off as they try and prevent it rotating. So long as the feed pipe is still attached you should be fine!

IM - give them the part number of yours and ask them to confirm whether it will be a suitable replacement. Put the ball in their court! Are you sure one of your pins hasn't snapped off?

Wires - so long as they're of a similar thickness and multi-core rather than single core, you should be fine. I tend to use 15 amp rated wire for general purpose car wiring like this, even if the current is less as thin wires are more prone to mechanical damage. If you have a multimeter you will be able to check the resistances of your existing coil to prove/disprove it at fault. A simple resistance test won't show up an intermittent fault, but it should remove the possibility of complete failure.

Tom, most, if not all, of the Ducellier components are now made by 'Intermotor'. Any good motor factor should be able to supply them.
Mark Smith