Well I didn't manage to get to the GT until 4pm because of various family oriented interruptions. But got down to the garage, it was sunny and warm and lovely. She started 1st time again, very definitely blowing exhaust manifold though, and I noticed the cooling fan does work, it's just incredibly quiet! So you can't hear it inside the car. The edge of the steel wheels, the radiator bottom support and some surface rust on piping and other metal bits underneath is all the rust I could find, i'm going to want to keep an eye on the pipes (coiled ones behind are the most rusty) but they are all solid and I had envisioned a re-pipe at some point in it's life anyway. The other surface rust will be dealt with using a wire brush, some brick/concrete cleaning acid and my old mate, Hammerite.

After a good wash, the paintwork is very good, there are 3 dents in the passenger side rear wing in a cluster, a few touched up scrapes on the front and rear wheel arches and the bonnet front and front-top is very chipped and poor. So a respray of the bonnet and a few patches here and there at the dent-man's place will make it very nice. The bumpers may get away without being painted, it's only the top face of the front and rear that has faded, so with some trim restoring stuff or a heat gun hopefully that'll get them back to slatey grey colour.

The gearbox oil (although already scheduled for changing) must be old/low as it can be quite difficult to get into reverse, it does seem a very 'french' gearbox overall really! The gears feel about 12" apart from each other, the gearstick seems to travel ALOT, I frequently put it in 1st when I think it is in reverse! Will have to watch out for that, but i'm sure new oil will help and i'll get used to it.

It's a difficult colour to photograph, it looks best when it's overcast or when the sun is setting etc, in bright daylight the camera doesn't capture the colour very well, it looks washed out. 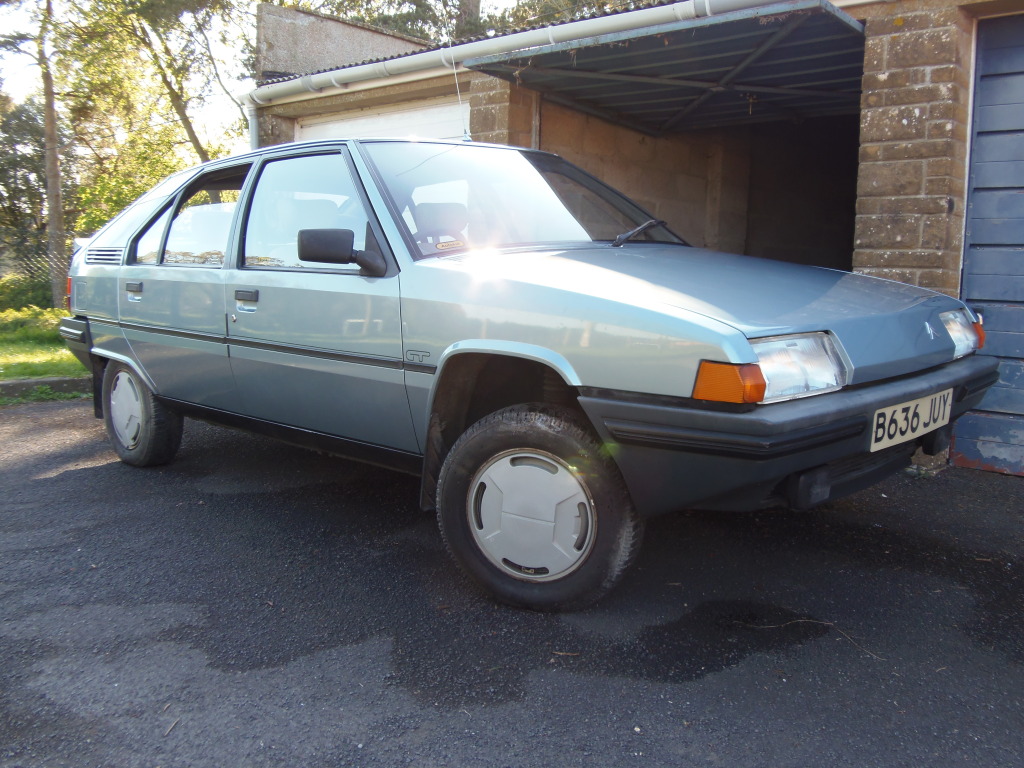 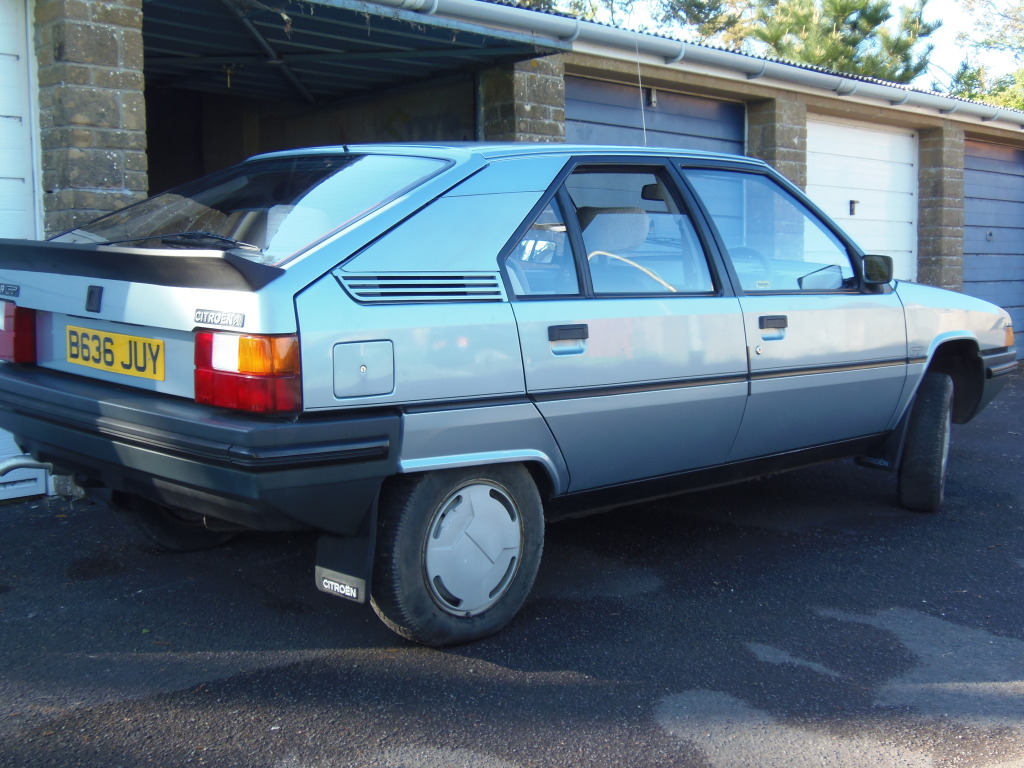 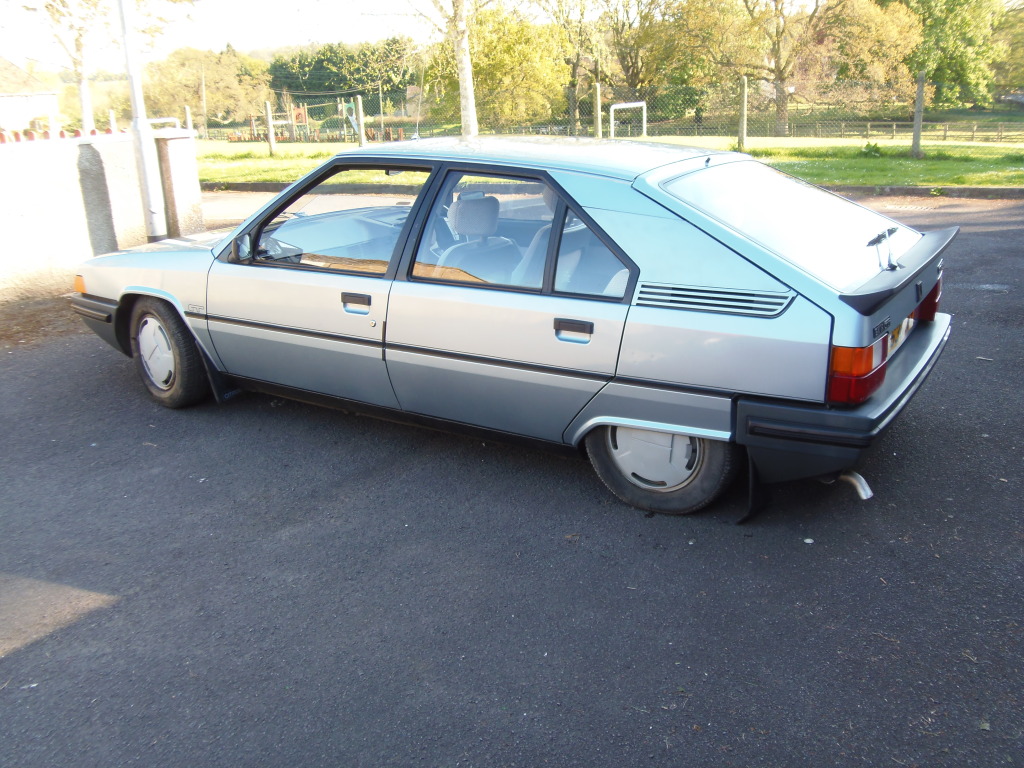 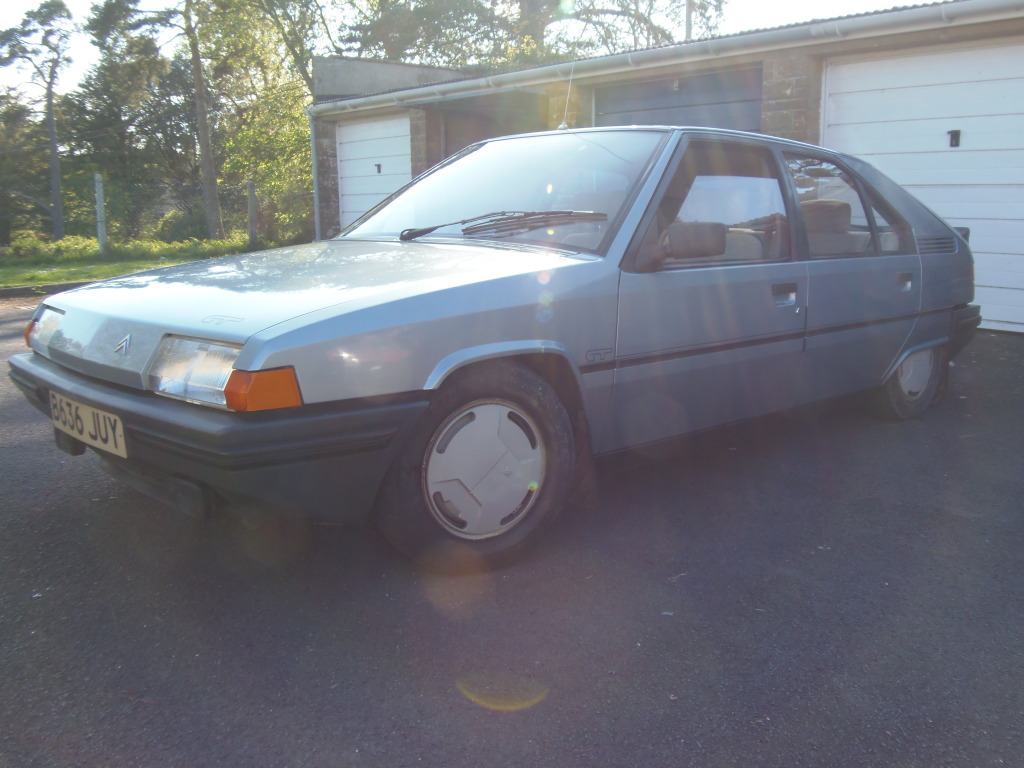 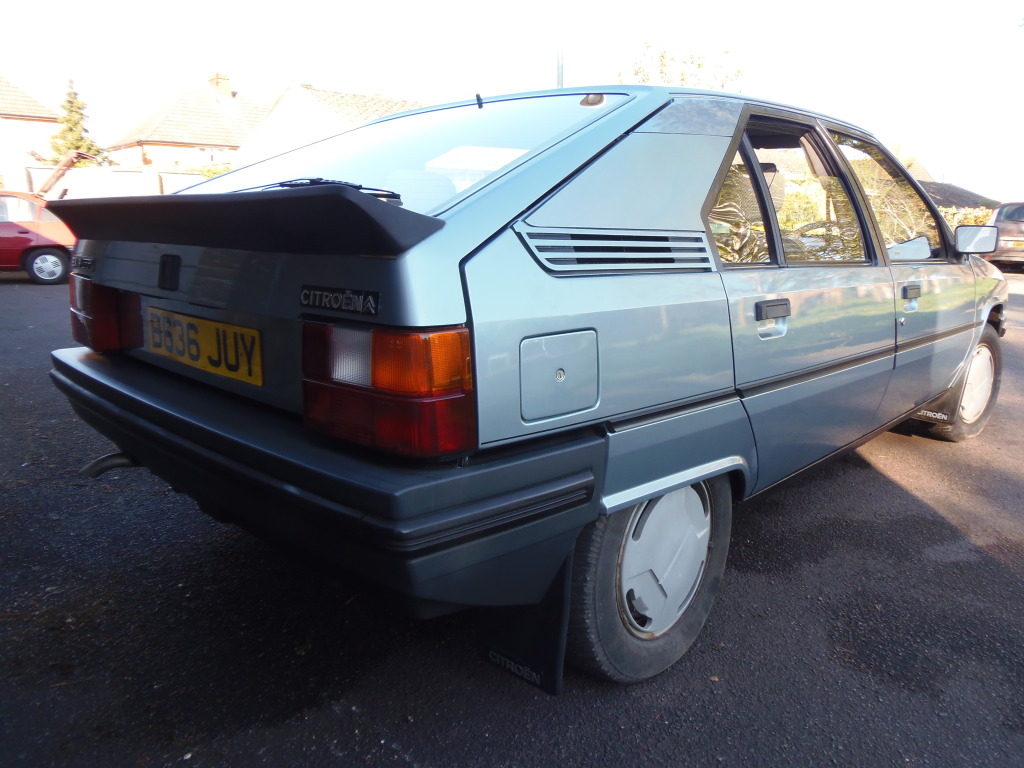 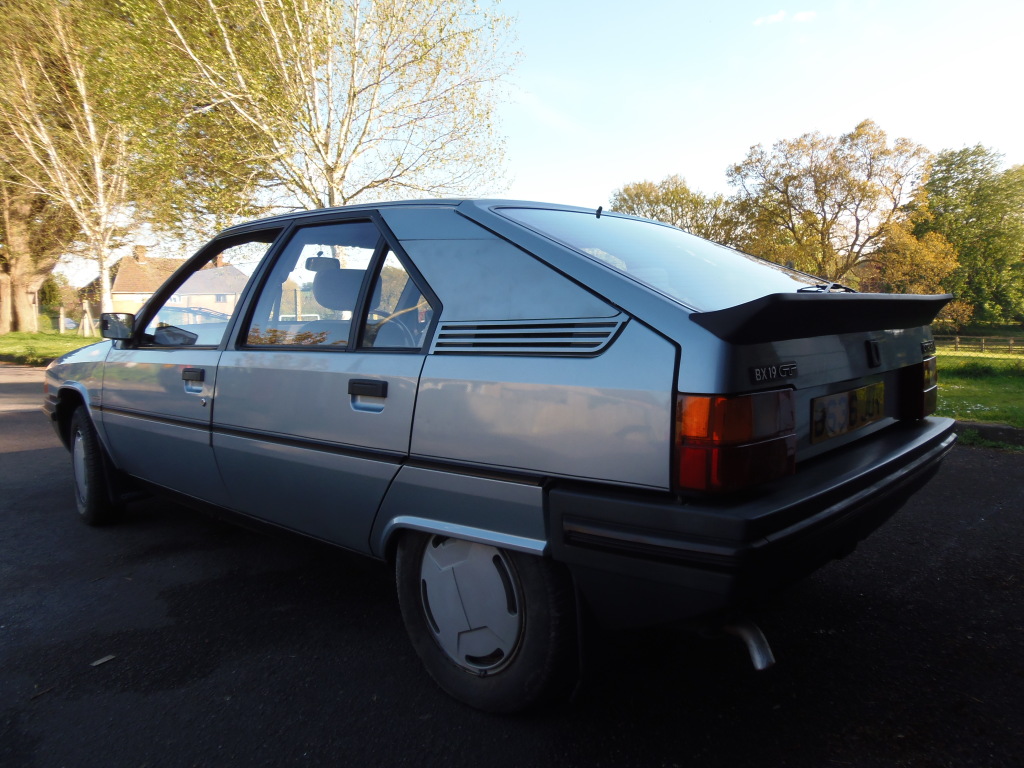 Interior is still clean, but there was mould starting to grow on the door cards. Also noticed the garage she's in is leaking and is quite moist inside, so she'll be going into the other one we are renting (to store things temporarily when we move in June), but she's covered now and the leaks are only around the back of the garage. 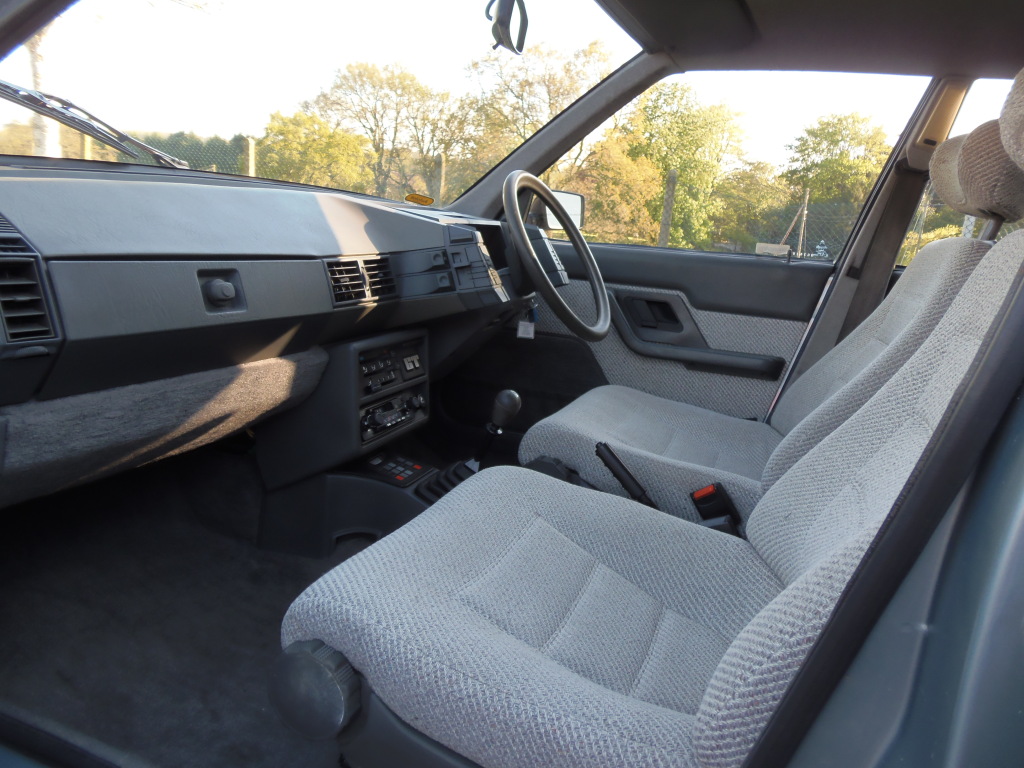 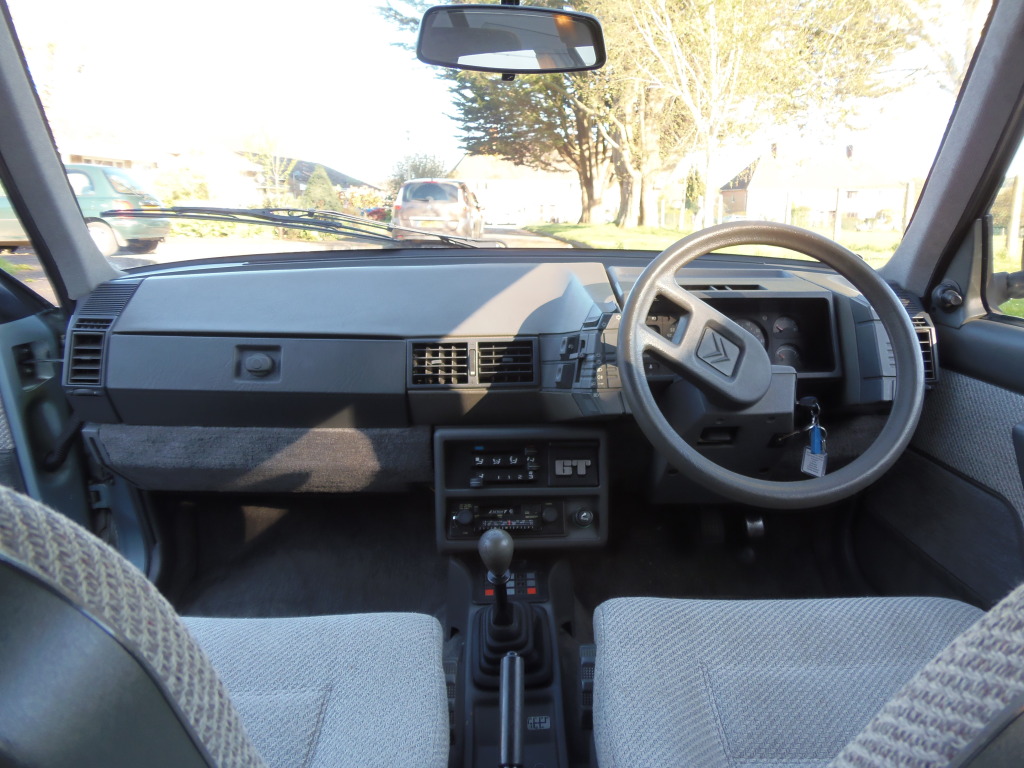 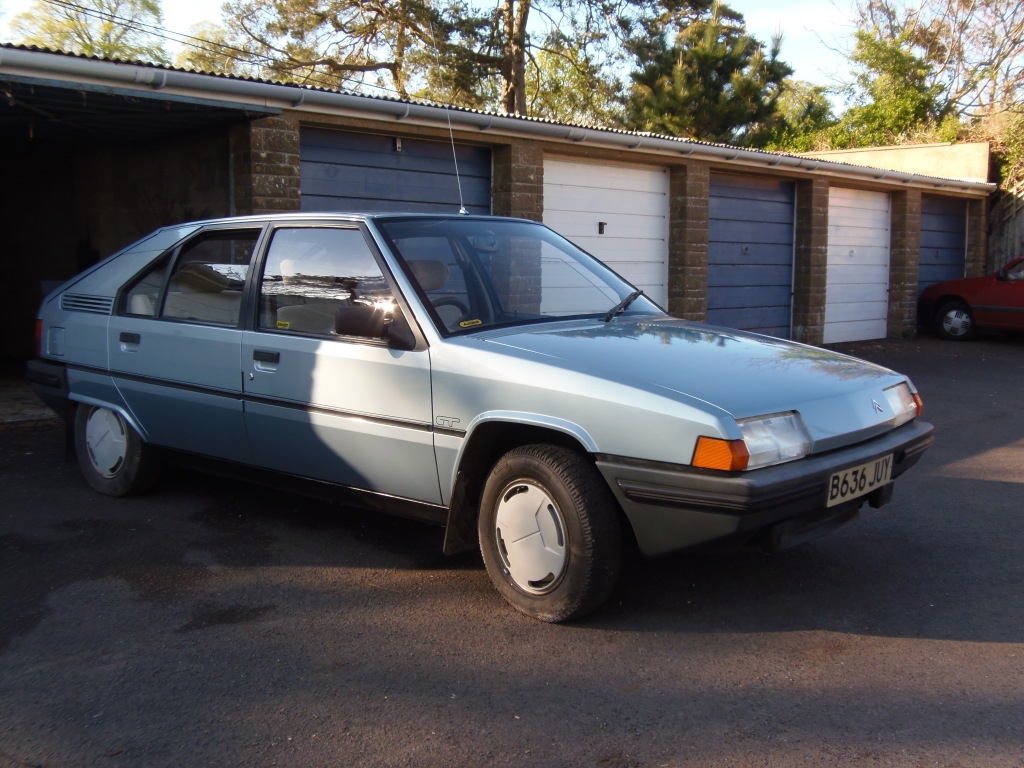 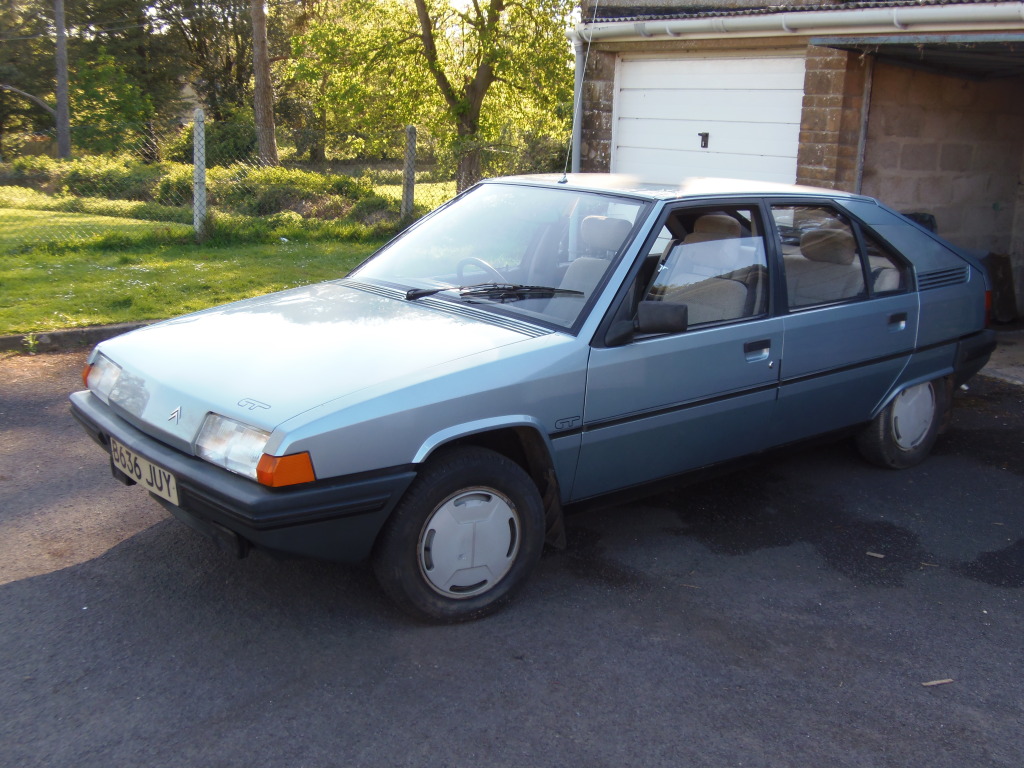 The photo's are very flattering for the car, up close there are quite a few blemishes and little scratches, hopefully something a good cutting will reduce. Manky, perished tyres and rusty steelies make it look tatty, freshly painted steelies and new tyres will complete the car I think. All the electrics work, including the optional rear leccy windows, but the drivers door window has come off of it's tracking, is this a door card off job? It would'nt go back on by pushing the glass down.

Polishing didn't make a noticeable difference, so a going over with some cutting compound might improve things further. Didn't have time to get the wax out, that'll get done after a cut. Had a crazy weekend, trying to get revision done today, but my eyes are so puffy and tired I don't think it's going to happen - i've got all my gumph organised so hopefully will start afresh tomorrow. Going to have a bath now, with a strong black coffee and chocolate, yummmmm

Worn linkages are probably giving you gearchange problems. I got stuck in the council tip the other day (scary given the state of my car. I though they'd chuck it into a skip!) because I couldn't get reverse. The whole gearchange had somehow got skewed. I walloped the lever over to the right and was then able to get reverse. Which is good as by now I was blocking the place entirely...

I've no idea of the work involved in reviving a worn linkage. Hopefully someone can advise as it looks like we both need to know!
www.classichub.wordpress.com
Top

I think that car got lucky when it found you! I totally agree about the wheels; decent tyres and refurbed steelies will really set it off - tidy Mk1 metric alloys would be the bizniss - if you can find them!
Top

If the linkage is anywhere as simple as on my 205 (And it should be, but perhaps access will be a little more limited) you just have to pull the old ones off and stick new ones on.

Took me about an hour, and that was the first time I'd done such a job on any car...

Love the GT too.
Top

Sounds good Matt. Where can you get the linkages from? Must make a massive difference to the feel of the car.
www.classichub.wordpress.com
Top

I bought uprated ones off ebay, but I guess main dealer or a good parts supplier.

Made a massive difference, and the new ones have small clips to stop them popping off...

I think two of the 205 ones should fit, as it's effectively the same engine/gearbox configuration, but the longer one will be different.
Top

Went to move the GT from one garage to the other non-leaking garage today, and we commandeered Steve's dads pick-up (NIssan D21, 2.5d n/a) to move a load of stuff from our house into the spare garage. We will be moving in June so we've started sorting stuff out, and stuff we can't be arsed with or will probably chuck is being shoved at the back of said garage for the moment.

GT wouldn't start at first because it had no petrol in it, so went to get some and then the gear linkage kept on popping off the ball joint at the back of the engine, so will need a few new parts there. Had a mini panic that i'd messed up the gearbox as it was stuck in 1st, but I just kept on having to pop the linkage back on the little ball. Phew. Struts were creaky for the first time today too.

Steve's dad thinks all BX's are crap, he's been in the car business as a sales director for most of his career (he's done Rover, Isuzu, Nissan and now is with Kia), but he liked the look of this one even though he said it'll fall to bits all the time, just goes to show how awesome GT's are!
Last edited by saintjamesy89 on Mon May 21, 2012 8:28 am, edited 1 time in total.
I'm not a Saint, or a James, but a Tom Saint-James!

The sales director clearly hasn't got a clue, how many cars that are 27 years old don't require some maintenance

MULLEY wrote:The sales director clearly hasn't got a clue, how many cars that are 27 years old don't require some maintenance

Nah, he was saying even when they were new they were always going wrong, apparently there was a Citroen dealers in the same yard in the 90's when he was with Rover. I just told him thanks very much for his opinion but bugger off ta!

He and I don't have similar car tastes, except SD1's. He goes for simple, and low maintenance, and I go for funky and attractive and a bit outside the box.
I'm not a Saint, or a James, but a Tom Saint-James!

Good on you, quite what the past has got to do with today is anyone's guess. I don't believe in the history of car production has a new model by any manufacturer when 1st released ever been perfect. Infact, modern cars always seem to be littering our roads daily as they are broken down

Ironically when Lana was searching for a new (to her) car, without exception all the dealers we visited said that the BX was (I would argue still is!) a great car, and how well they sold.

The BX saved Citroen financially didn't it?
I'm not a Saint, or a James, but a Tom Saint-James!

Didn't save them as such, but if it had failed it would have taken them down with it.
CCC BX monthly column writer bloke thingy - bx@citroencarclub.org.uk

Ah, knew it was something like that. But it never was going to fail was it? (unless Citroen really fudged it up that is!).
I'm not a Saint, or a James, but a Tom Saint-James!