Screwfix do an araldite 2 part epoxy that is supposed to be good for bonding non-porous substances (like glass, hard plastics and metal) and is £5.59 for as much as I need, so will try with that. Cash isn't too bad, but £100 on window runners that I already have seems daft!

On another note, i've decided when the C1 (a firend is thinking of buying it next week, fingers crossed) is sold to have a bit of a front end overhaul done at my local garage. The clutch needs doing soon, as it's slipping ever so slightly. Whilst the clutch is being done I will get the following done at the same time:

That should make it MUCH nicer to drive! But isn't going to be cheap... All needs doing before the challenge anyway, and I think i am right in thinking most of it has to come off to change the clutch anyway (obviously not wheel bearings or wishbone bushes but these are probably worn anyway), so makes sense to put new parts on as you go.
I'm not a Saint, or a James, but a Tom Saint-James!

You' might have the bearing front subframe Tom, unless someone has changed it in the past. If so, I'd also get the subframe dropped and have some grease nipples fitted to the bearing housings. If those bearings go in the future, you're gonna have a bad time.
The national BX register - click to submit a car!

I've found two bearing rebuild kits on french ebay - but need to check if I have bearings or bushes first. I have read from an old post of Toddao when he was redoing his roller bearings and according to Haynes these were discontinued after September 1985. My GT was registered in 28/02/1985, so will almost certainly have the roller bearings. So i'll check tomorrow before I make the 139EUR plunge on some new bearings! Damn the exchange rate at the moment, 6 months age these would have been cheaper!

What am I looking for to see if they are bearings or bushes? Don't have a clue.
I'm not a Saint, or a James, but a Tom Saint-James!

Yours would have had the bearings when new, but if the bearings ever wore out it was common practice at a Citroen dealer to ditch the subframe for a later one. If you've got the front-rear brace running under the gearbox, you've got a mk1 subframe. The way to find out is to measure the thickness of the wishbone spindles. 14mm - original bearing subframe. 16mm - later non-bearing subframe.
The national BX register - click to submit a car!

There is a brace that goes under the engine/gearbox, but will check the spindles at the weekend to be sure. Thanks Kitch.
I'm not a Saint, or a James, but a Tom Saint-James!

Was quite low mileage, I think? You might be in the exclusive club of having a roller bearing subframe. As far as I know, the only other person in said club is me!
The national BX register - click to submit a car!

Im in a bit of a mood and have no-one to blame but myself. Don't you just hate that? Read on for more...

Some good progress made with the GT today but some disappointments too! First off I cleaned the isides of the doors, getting rid of all the sticky crap. Took a while as I had a recycled scouring foam pad that was really shit, and about as abrasive as my face (read, not very). White spirit + old dry adhesive = gooey gunky shit, I got this all over myself, moslty my hands and under my nails but also, somehow, in one of my eyebrows. Not so pleasant when removing! 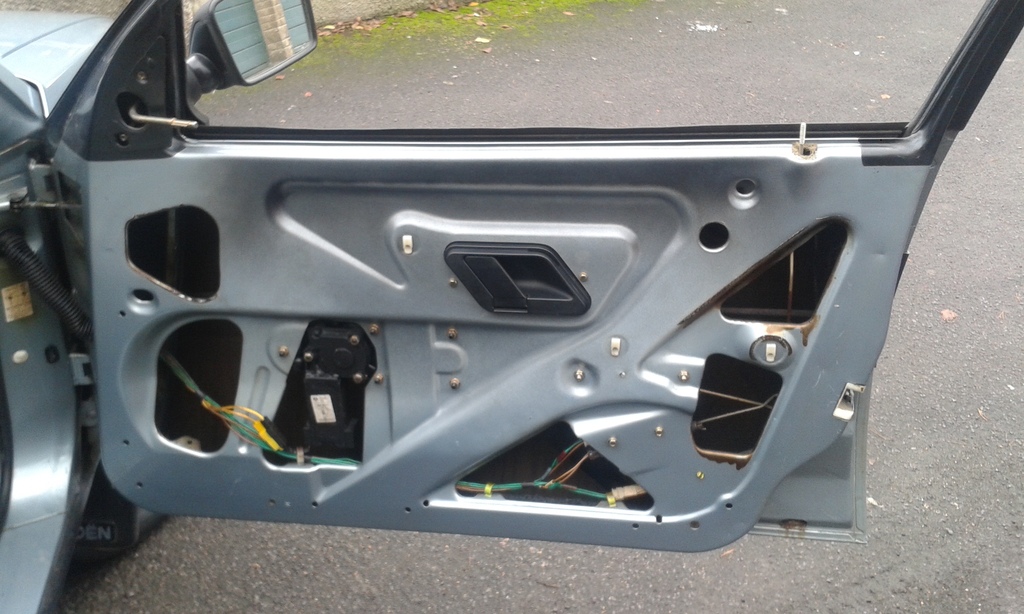 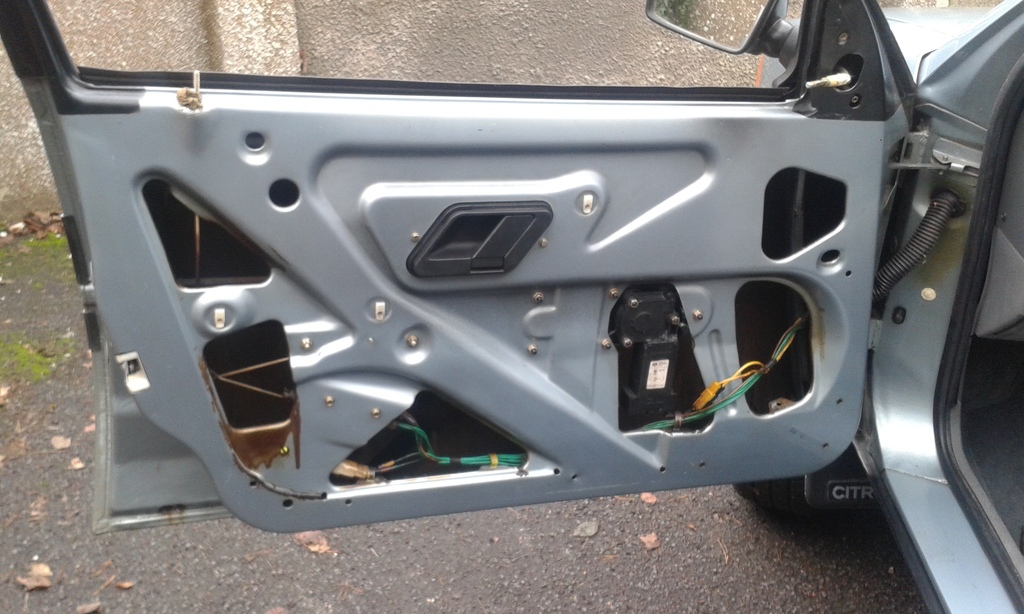 I decided to use the same silent coat stuff that Andrew used for the Aubergine, it had some really good reviews and wasn't too expensive (about £10 a door) so got on with trimming it all to fit nicely. Quite like the stuff, not just your basic bitumen/foamy insulation. Really sticky too for ease of application 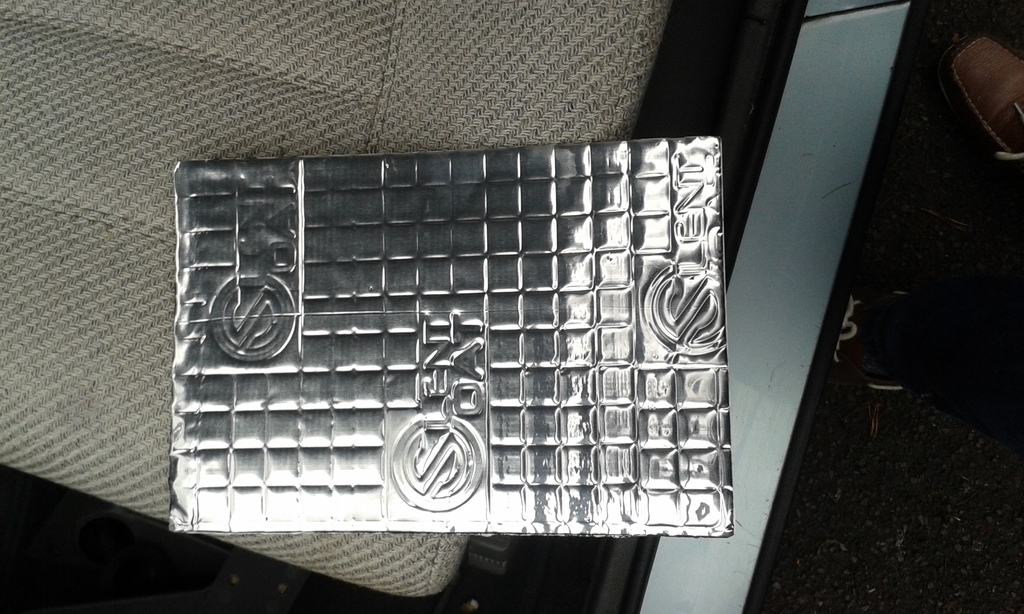 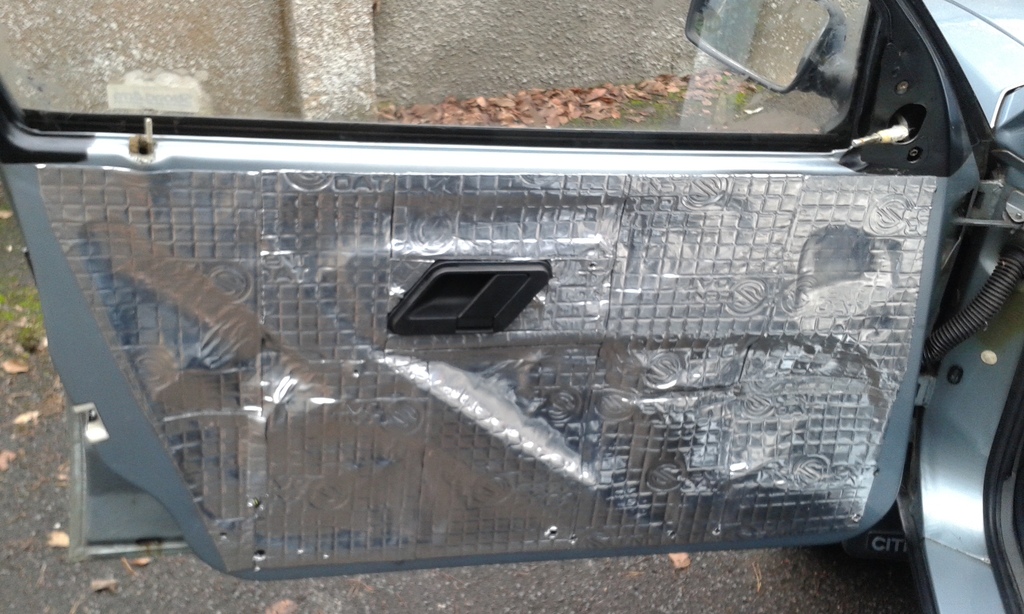 Door card back on, the lower LH corner has no clip as I broke both getting the door off, it flaps ever so slightly if you slam the door but this isn't too much of an issue - read on for why. And people slamming my GT's doors usually only do so once if they're smart (my husband is not smart). 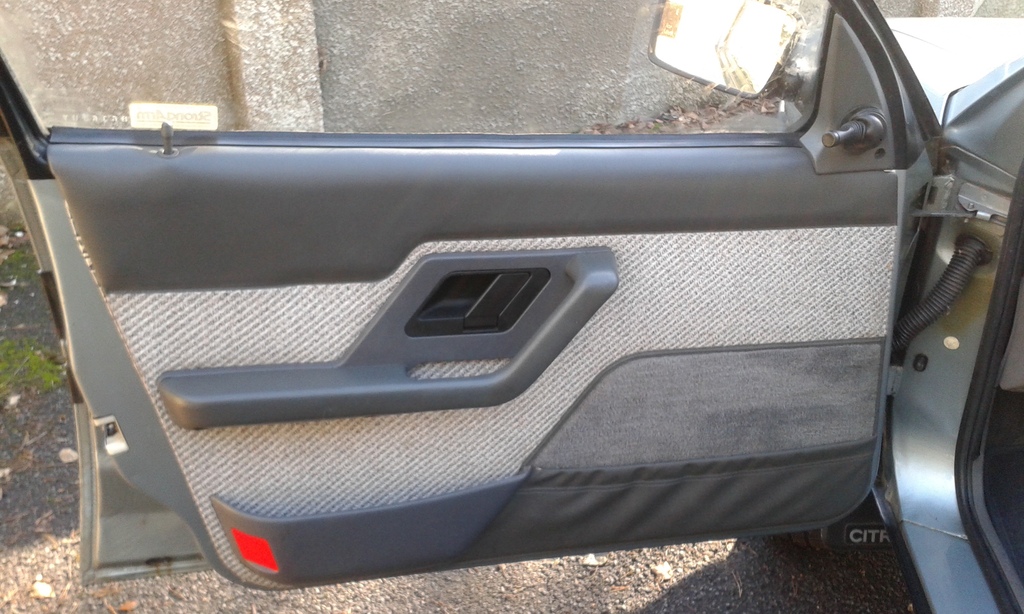 Went slightly outside the door card area, so will have to trimit to look better - a stanley should do I think - obviously being careful about not scratching the paint. 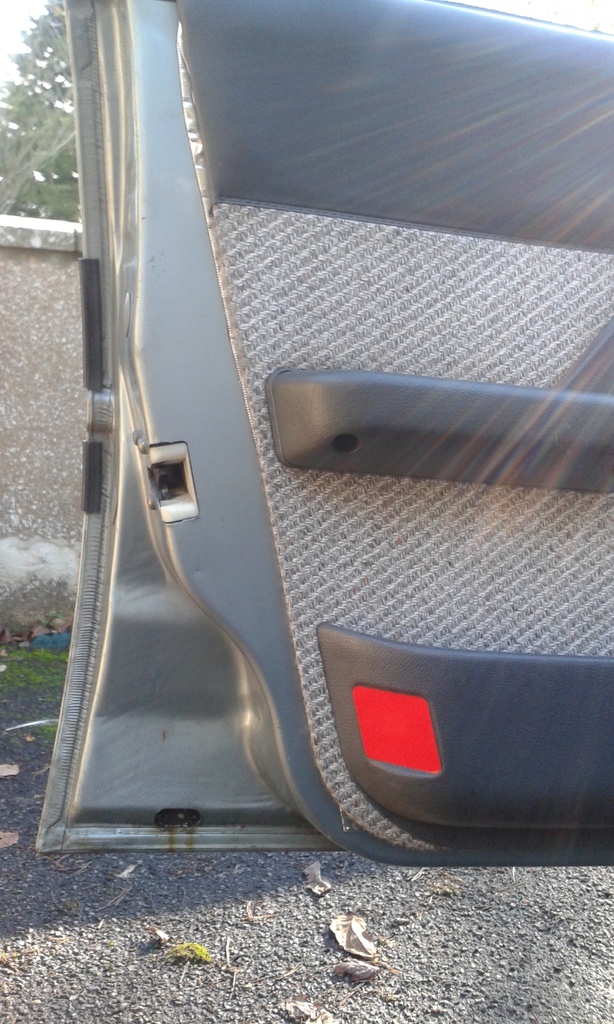 I had a little more time so decided to have a go at the lower speedo cable, having replaced the upper to no improvement in speed detection earlier on in the year this is the logical next area of attack. The GT came with a spare lower speedo, but go figure it's a MK2 item, so too short for MK1's. For those that have not encountered the intricacies of BX speedo cable fiddling (and boy are they intricate), MK1's speedo goes through the bulkhead by the steering coupling whereas MK2's go through the bulkhead in the glovebox/passenger footwell area. So I shall be on the lookout for a MK1 lower cable... The upper I found at chevronics and was not far off £100, but needed replacing ayway as the plastic coupling at the back of the speedo had snapped disconnecting it from the speedo.

So. What next? Ah, brakes! I had been meaning to put the new discs and pads on the front as they squealed and squeaked like a piggy. So I set about this sthinking it'd be easy as im sure the TXD brakes were a breeze. Didn't consult HBOL as I thought I knew what I was doing - er no. I had forgot you had to rotate the caliper pistons and I lost onje fo the pad clips... The floor is covered in pine needles not a dissimilar length to the pad clips so spent a fruitless 10 mins looking and feeling to no avail. Will have to get a replacement, so that means walking home... 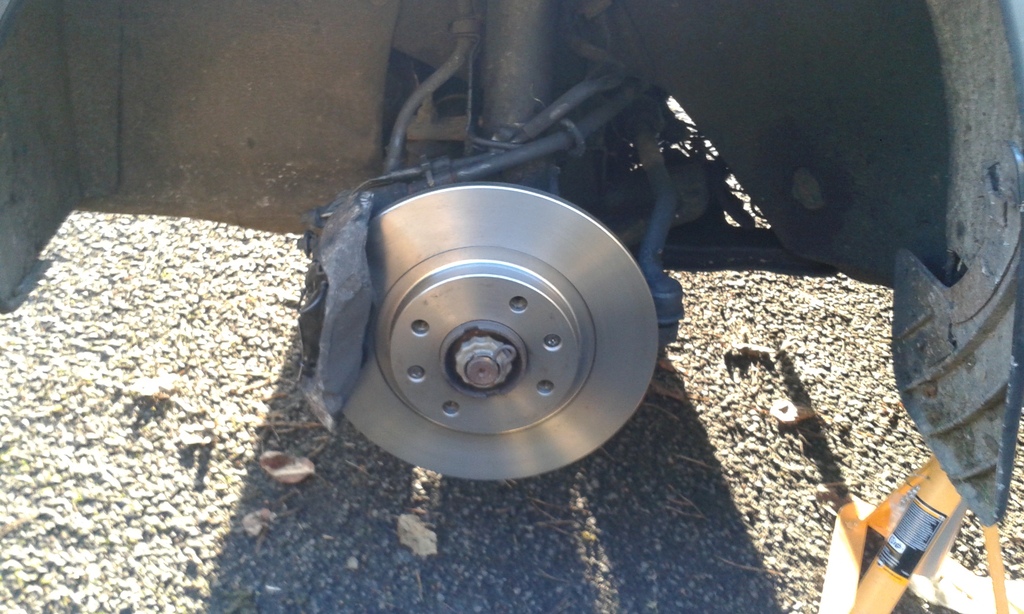 Whilst messing about in the general area of the wheel arch, I kept getting green gunk all over myself. Usually I disregard such things as it's not unusual for mme to get messy when doing anything physical (cars, DIY, gardening, sports etc, you get the idea), but when I was putting the wheels back on, I noticed the inside was covered in a quite cool radial pattern of said green gunk. I guess the CV boots are really quite gone then? 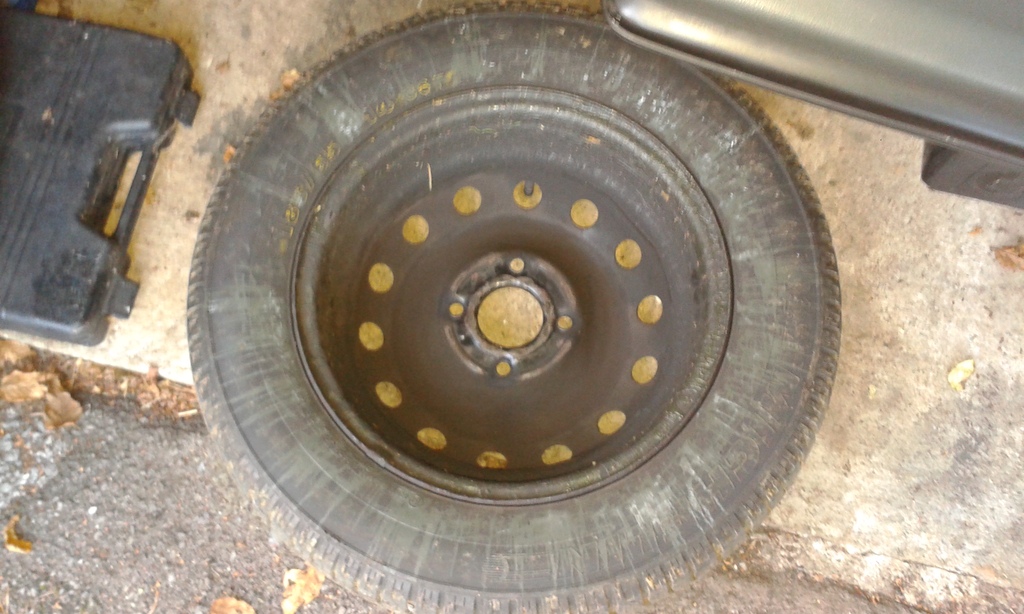 You miught be wondering why im in a mood. Well, after refitting the window glass (a right fiddle) and BEFORE i put the insulation on the passengers door, I have the windows a good lot of up and down to make sure they were working well. The drivers was not, it kept slumping toward the fron of the car and then falling out of it's seal/tracks, so I didn't insulate this door or put the card back on - it is staying up but cannot be lowered without holding one end.
Now, the passengers window was working well, a little lopsided but when it got to the top seal it levelled out and was fine. I happily insulated the door, put the door card back on and went to pick Steve up. Wound it down to chat with a friend and it went wonky again. So now still have two in-op windows. Although they do stay up correctly, and dont let water in so a very small improvement.
The real PAIN IN THE ASS is I will have to cut into the insualtion on the passengers door to try and fix that side - I reckon it'll be a mechanism out or even new mechanism each side - which I was hoping to avoid tbh.
I'm not a Saint, or a James, but a Tom Saint-James!

A small update, finally got around to gfetting some new boot struts - only got one new one on though as the second metal dowel refused to budge and I was, for some unknown reason, doingt his at quater to 10 in the evening on my drive so thought the neighbours probably wouldn't appreciate metallic banging noises at that hour! Especially as it's quite built up around me, so bang and crash sounds tend to bounce off the houses and walls and reverberate about.

ALso, found a reasoably priced new drivers window mechanism on french ebay. The UK site ones were either expensive or used - I wanted new as I don't fancy doing this job again! Will hopefully get it on at the weekend, as well as all the new soundproofing etc as i've been driving around with the doorcard off, lots of road/wind/tyre noise, especially when the roads are wet.

Coolant has gone greasy and rusty-orange again, guess i'll be doing another flush then! Will have to see if I can borrow a hosepipe to give it a proper backflush. I guess being stood for so long had furred up all the waterways.

Looking forward to the challenge...
I'm not a Saint, or a James, but a Tom Saint-James!

I do have a speedo cable somewhere (not sure if it's mk1), and a complete replacemt mk1 gt dash binnacle in grey.

Thanks Tim, im after eithr a MK1 lower or MK2 upper - assuming the connections to gearbox and speedo are the same on each mark.
I'm not a Saint, or a James, but a Tom Saint-James!

afaik the gearbox end is the same.

I will try and get up to the lockup and retrieve it.

Got the new window mechanism on the drivers door today, hurrah! First time in my ownership to have a functional drivers window in this car. Not as fiddly as expected either, took me a couple of tries to get the old mechanism out (haynes simply says remove it from the door cavity), but got there in the end.

The new electric motor is about half the size as the old, and didn't take two small electric connectors, but one larger one - so I had to extend the wiring to reach the plug, to find that the smaller plastic connectors didn't fit, so away with the plastic but keep the spade connectors as they fit nicely. Ahh, they also kept falling off, so I cable tied the wires to the motor to stop gravity doing it's job, and to keep the newly functioning windows, well, functional.

So next was putting the new sound insulation on, then the door card a nd accessories - by this point, I was really quite cold and hungry, having not prepared well enough for how bloody cold it is down here at the moment (we had snow Thurs night) so I didn't take quite as much care as on the passengers door, but still a passable job I think.

New window mechansim. Feels much more substantial than the old one, which is nicely reassuring. 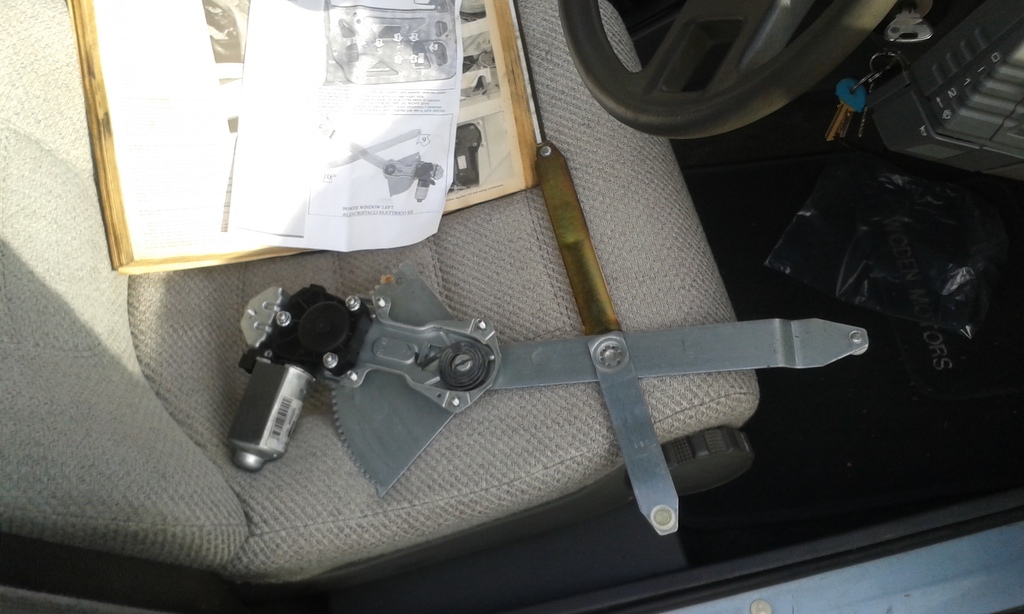 Old one out, there was lots of play in the central arm rivet thingy, and circular wear marks too. 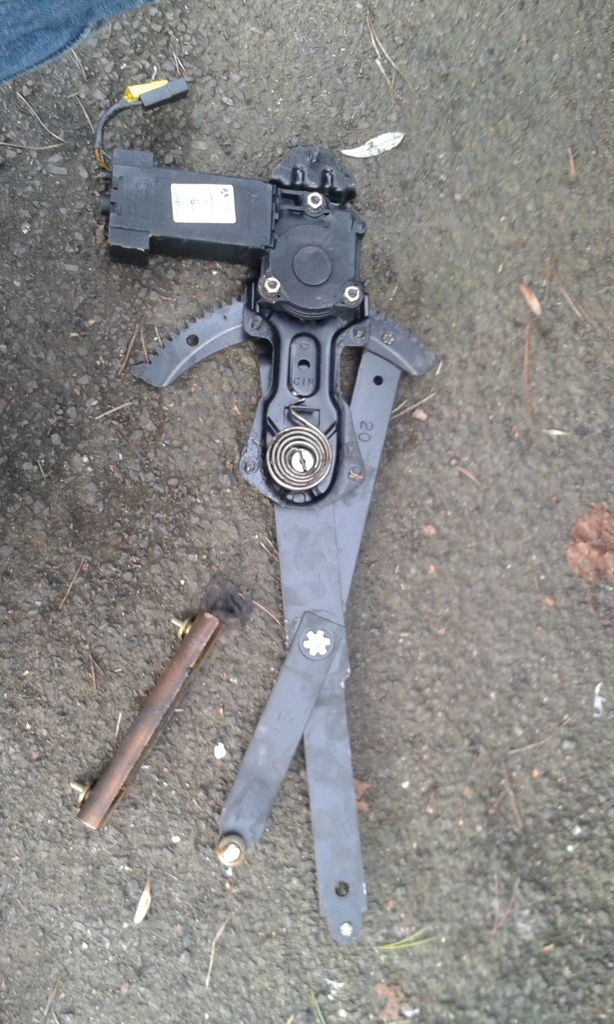 New part in, note that wire extensions. I started splicing the wires with some from my toolbox to extend them, but then found this connector block with already attached wires of ideal length. 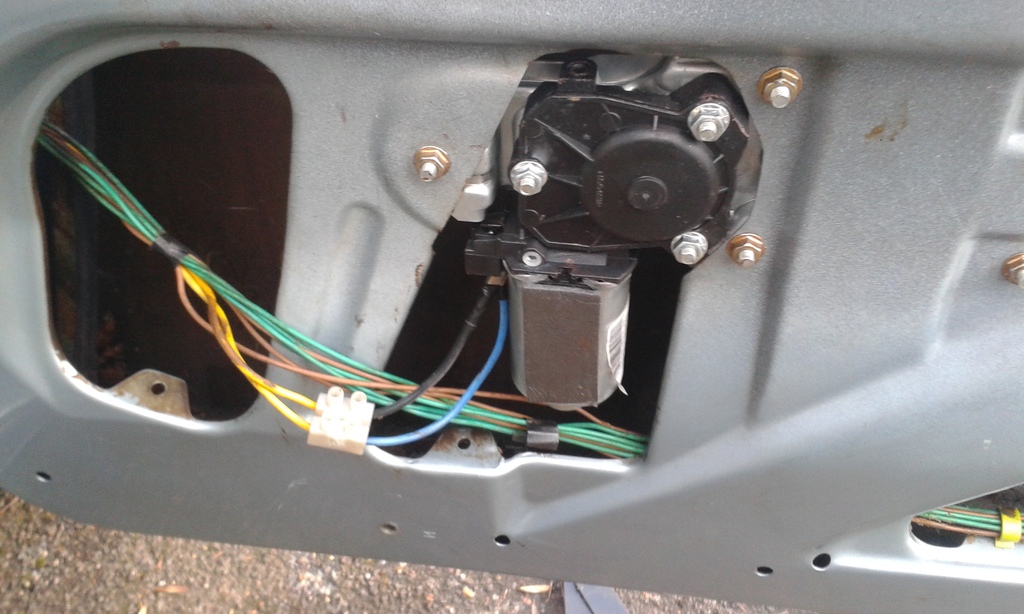 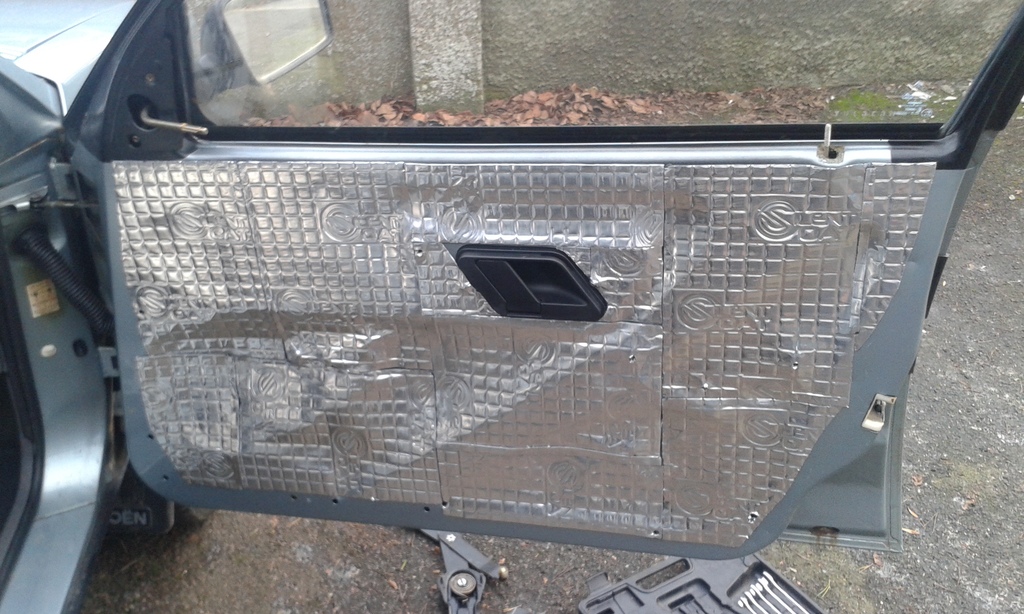 And door card back on! It'd been off for quite some time, so driving it will be much nicer now. It was raining by this point so was glad to be done. Popped in for a coffee and a warm up with our friends a couple of houses down and called it a day. Got to trim the insulation on both sides now... 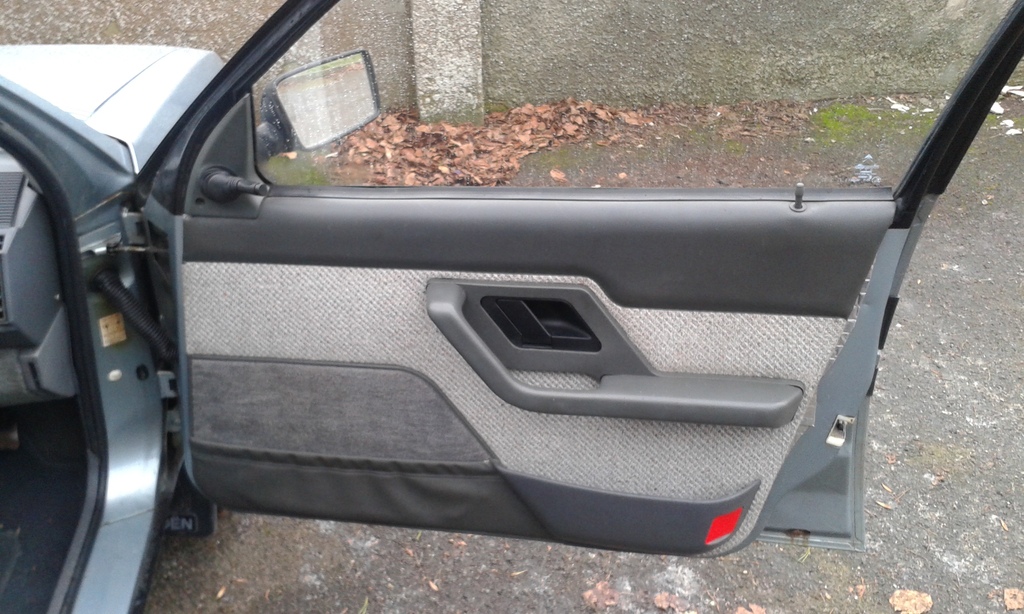 Now it's wine time, and some dinner too.
I'm not a Saint, or a James, but a Tom Saint-James!