Yes, the MK1's front speakers are in the dash which makes the doors easier to play with. But not so great acoustically I would have thought. Not sure what the GT's speakers are like, papery and crappy probably but the radio hasn't worked since last March!
I'm not a Saint, or a James, but a Tom Saint-James!

Good luck with that Andrew!

I had a spare hour today so changed the LHM for Hydraflush, given the state of the LHM filters when I last looked, and the dark colour of the LHM I was expecting them to be all dirty again, not so! I didn't even clean them this time, just poured the old LHM out and put new Hydraflush in, It's noticeably thinner just from pouring it into the reservoir, and is a beige colour which was unexpected.I didn't bleed the brakes becasue I have a shit-ton of stuff to do this weekend! 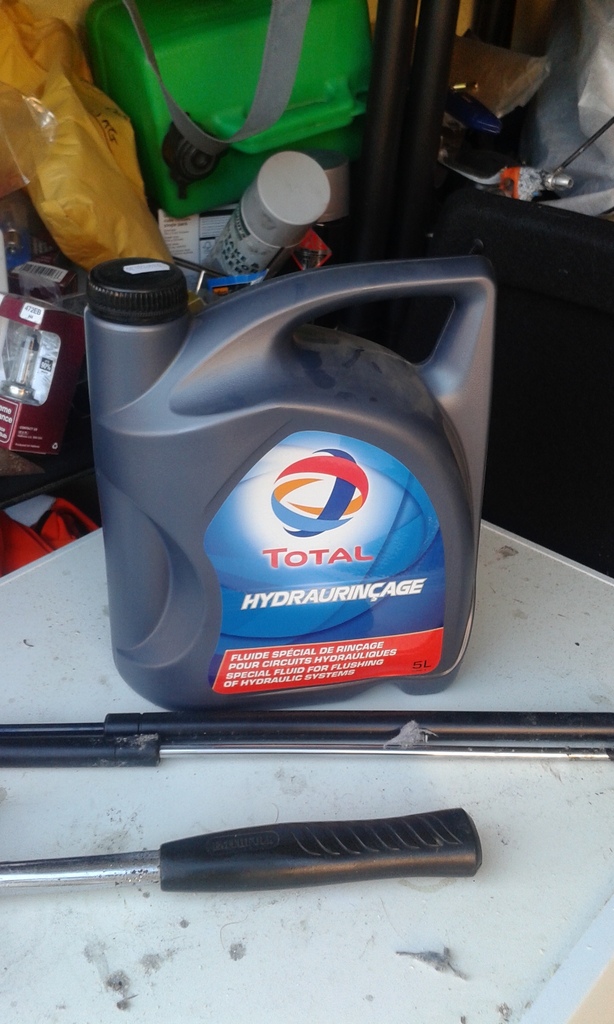 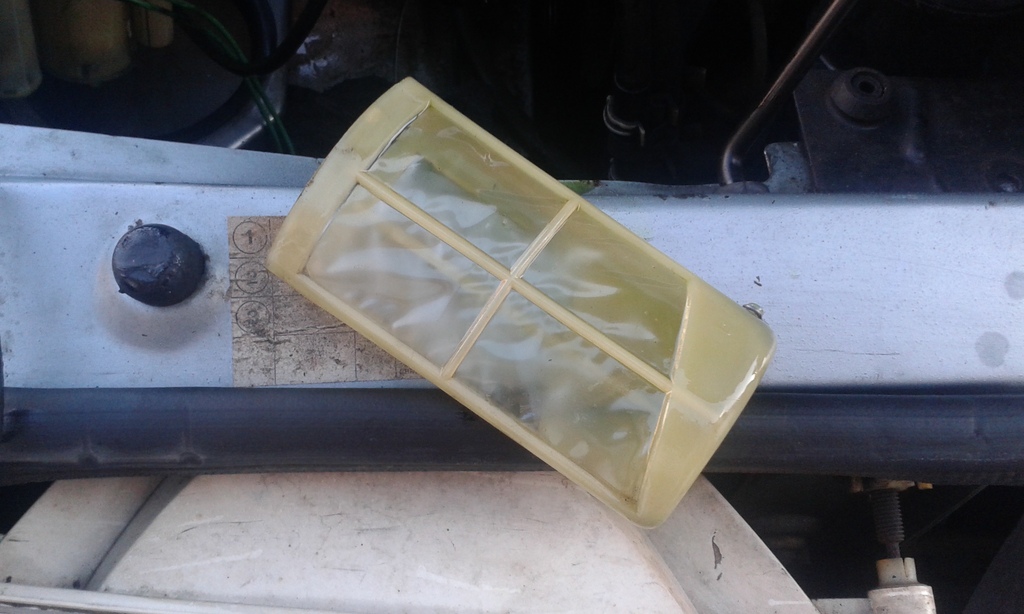 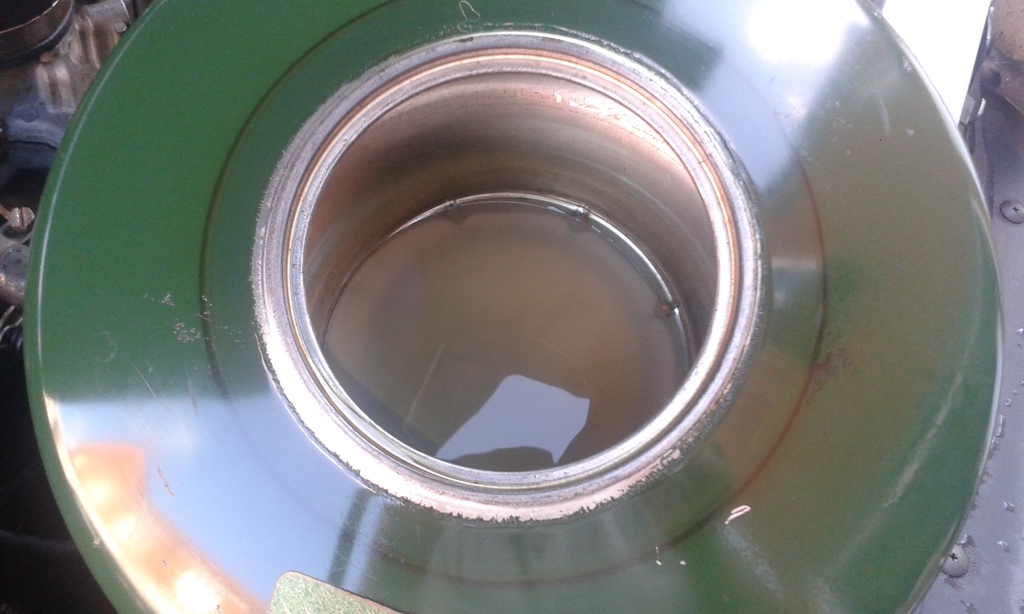 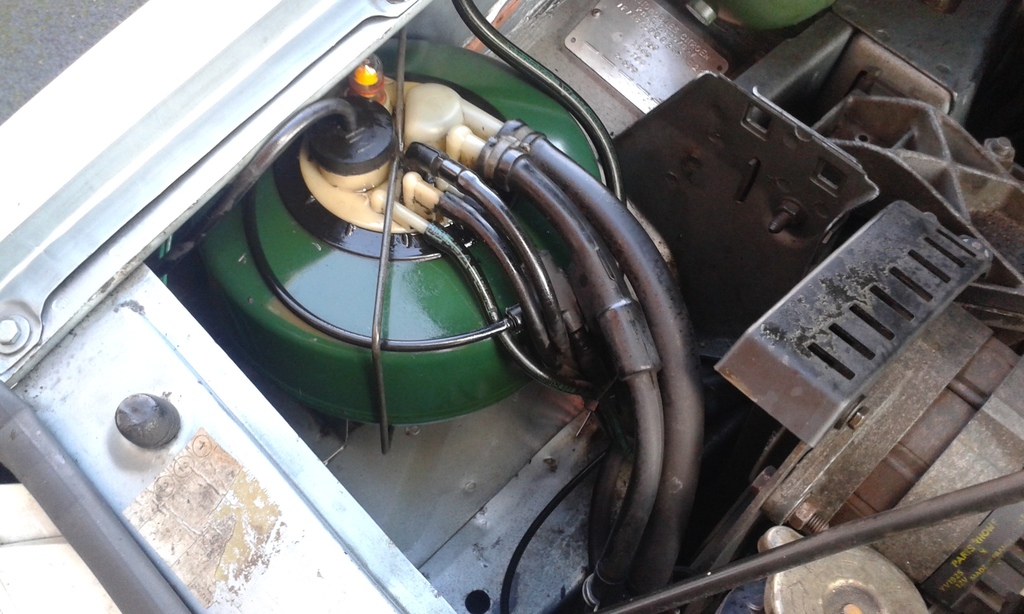 I am doing some 'top-up' modules to make my degree an Honours degree, so I can go up the ladder at work and get registered with the HCPC (Health Care Professions Council), i'll have to do a training portfolio aswell so we have had a shift about at home. The bigger bedroom (our currewnt bedroom) is turning into a study/office/library and the spare bedroom (previously full of shite) has become the bedroom. Ours is a new house, so all the qalls are paionted in water-based breathable white paint to allow the house to settle and shrink - it's old enough now to actually have some colour on the walls! So masking/filling/painting and all the rest has been going on this week and wil be this weekend too.

I had a go at putting the other new boot strut on, but the metal dowel has rusted solid, and no amount of bashing with a hammer and screwdriver seemed to make it want to shift, so for now I've left it but will periodically soak it with penetrating fluid. Not sure if it's because the weather is warmer, or becuase in early January I had to commute in the GT for a week, but the engine has lost some of it's tappety/clickly noises and seems to run a lot quieter and smoother today, even though I can hear it more now because of the newly insulated front doors (much less wind and road noise now) quite please with it driving around town today. Just imagine what it'll be like when the driveshafts/bushes/bearings/clutch/cables etc are done - it'll be wonderful to drive

It'll be brilliant for the Challenge

That's my plan Phil, give the old system a proper week of running, probably over somewhat challenging surfaces at times

Then drain and refill with LHM when home. Will have to keep an eye on the filter on the challenge i suspect, but it's not that difficult to clean.

Hope to fix the passengers window mechanism over the weekend, as well as adjust the drivers - there is waffling at above 40 or so, seems that the top corner doesn't quite sit right in the seal, so will need to adjust the mechanism up a bit.
I'm not a Saint, or a James, but a Tom Saint-James!

Been using the GT quite a lot over the last three weeks, it's been at home more than inside it's garage as we only have one everyday car - so if Steve is out and about then I have to use the GT to go anywhere. Usually not a problem as I am no stranger to walking places. It has been quite wet recently, and water is getting in somwhere around the vacinity of the passenger rear opera window, don't think it's the opera window itself (that's new) but could be the plastic panel above it - will have to get the sealant out and test - you can hear air waffling in that direction at speed.

So today I aimed to adjust the drivers window, as there is waffling here too at speed - but after an hour of fiddling (and having to tear up the new sound insulation - which made me cross as it's a mess now) I realised that although the window isn't quite level, the waffling is coming from a split in the foamy liner in the top rearmost corner. Will have to look into that as it's irritating.

I also had a go at the passengers window mechanism, thinking it'd be as simple and good as the drivers. Not so. I went for a different seller and mechanism brand as the last didn't come with wires, so had to improvise with that one. This one has wires, and looked nice and sturdy, which it is. So much so that it nearly didn't go into the door recess! Scratched the shit out of the door getting it in, but the door card will hide that. Also, it doesn't have studs that come through the door to be secured with nuts - oh no, it has threaded female supports - so I now need to get some bolts. Not that this mechanism was any cheaper, it was about the same price as the much better (apart from the wires) drivers side one.
On top of that, the runners that came on the glass in this car were previously stuck on (not the standard clip on runners), so I spent some time cleaning and sticking them back on with super sticky 2 part epoxy stuff a while back, drivers side seems to be all good but the passengers side have both fallen off. Bum. Also need proper window runner now. So all in all, not a great session today, made little progress and need to buy more stuff. 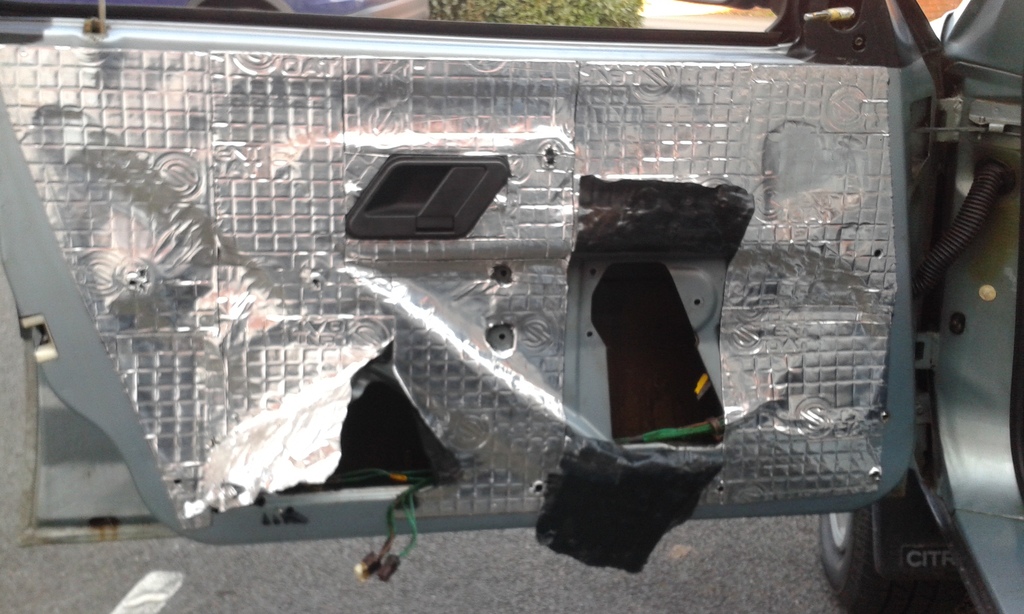 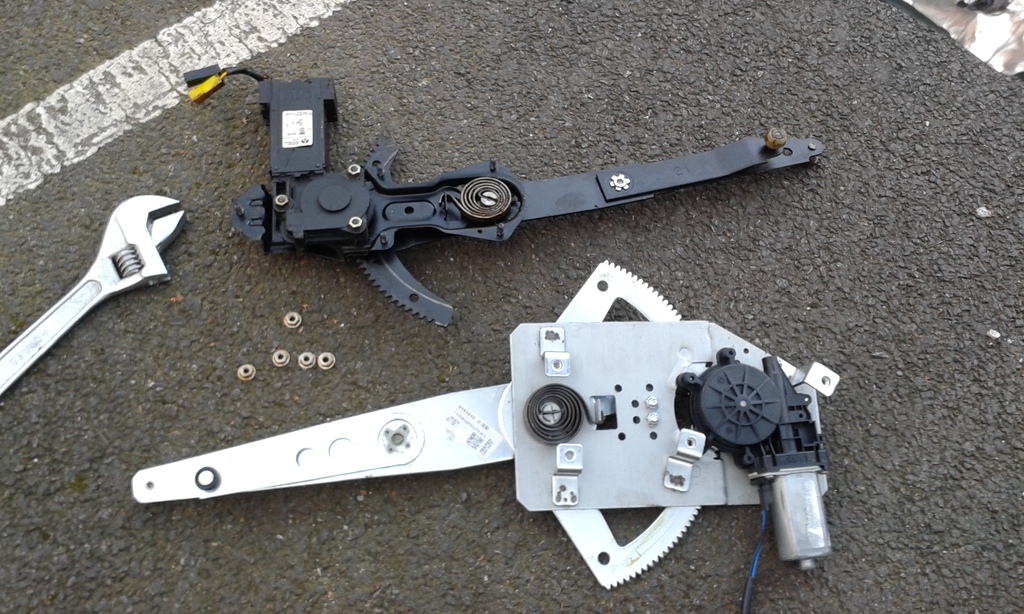 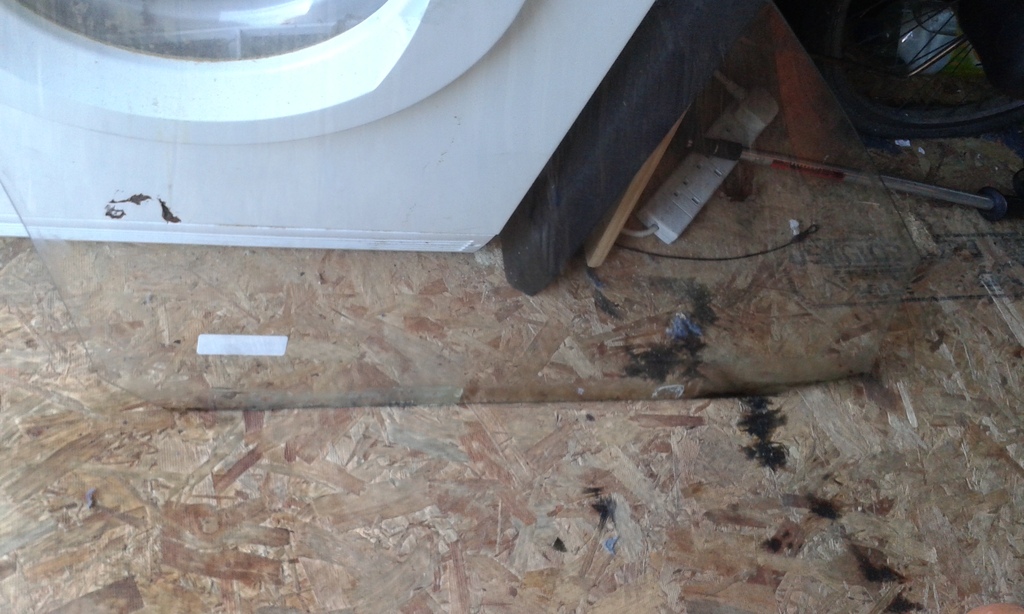 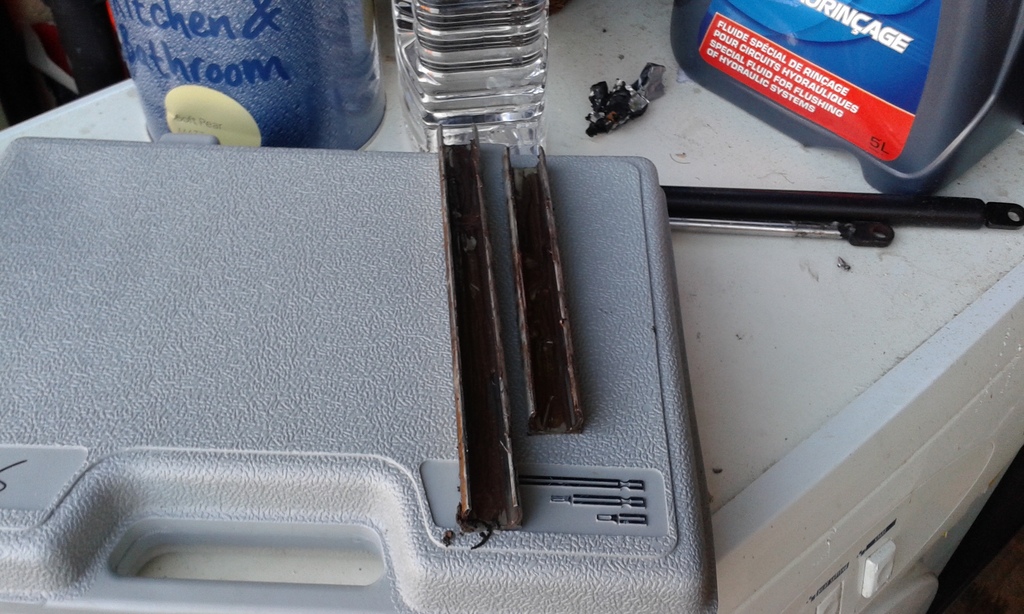 The one thing I did that was good, is trimming the insulation on the drivers door so that it isn't visible under the edges of the door card.
I'm not a Saint, or a James, but a Tom Saint-James!

Ordered new window runner from Chevronics - £58! Genuine Citroen part though. WIll pop down to our local nut shop on Monday (Wentons Fasteners, great place) to get some bolts, the wing mirror retaining bolts happen to be the correct size so can take those in to compare along with the nuts from the last mechanism.
I'm not a Saint, or a James, but a Tom Saint-James!

Have located that speedo cable, can you let me know if it's any use. Part number is 96027855
Lots of Motors, mostly semi broken....
Top

Hi Tim, hooray! Looking at the part numbers, I *think* this is a MK2 upper cable - should measure 106cm? And have a largeish white plastic connector on one end? If so that sounds good to me, I can't find any MK1 lower cables so will have to move over to using the MK2 setup.

PM on its way. Thanks!
I'm not a Saint, or a James, but a Tom Saint-James!

Let me know if it will fit. I have 3 mk2's so will keep as a spare if it doesn't fit.
Lots of Motors, mostly semi broken....
Top

Ok ladies and gents, the GT is off to see Rich (Kitch) this evening, so I thought i'd better sort out the passenger window. Now all sorted, and out of, what I suspect, spite and because I wooped and said "Hooray, I now have all functioning windows" when I lowered the drivers window, it slipped and went wonky - so the sticky shit on that has gone too - so i'll have to buy a proper slide on runner, rather than the stick and bodge approach that i'd thought would save me over £100. Should have just done it properly in the forst place, as now I will have done both front widnows twice!

I also used my big hammer (usually lives at the garage rather than home) to get the stubborn drivers side boot strut pin out, the pin hammer I have at home just couldn't do it! Note resourcful use of brush to keep boot lid up

Whilst I was in the boot, I saw a funny bit of carpet. THIS willl be the elsive source of road noise at the back passenger end of the car then! I was worried i'd have to have the opera window off and re-seal it, but there seems to be a missing bung here. The heat from the backbox has partly melted the carpet here, and you can just see the pavement through a bit of it - or else I wouldn't have noticed it.

Now back to studying, and cleaning the house. What a joyful combination...
I'm not a Saint, or a James, but a Tom Saint-James!

It's fitting that those two are pictured together, as it was your purchasing of your GT (which seemed very expensive at the time, yet looks a bargain now!) which encouraged my Dad to have his GT restored. That 'small' job has turned into the biggest pain in the arse of my motoring career, so cheers for that

Only 11 left in the country according to those websites, and two of them, both in the same colour, are here in this pic.

So far clutch cable has been replaced (lots of swearing down on the Solent this morning). Also looking into possible options for mounting the coolant temp gauge. Will have a quite look at exhaust in a mo.

Wheel bearings etc all arrived this morning, so I now have most bits here ready to crack on.

There are many things going on GT wise on the solent, as Rich likes to refer to it as

The biggest saga seems to be the exhaust, the chap that did the front to rear pipes and exhaust manifold gasket last year did a right half assed job on the exhaust. The maniofold gasket was done and the head face cleaned, but the manifold face wasn't cleaned of old gasket material, and when Rich looked at it, all the nuts were loose and one was missing! Also the gasket itself was obscuring part of cyl no.4. No wonder there was a blow! Also, the downpipe is on its last legs (but Ruich managed to fix it for now) as it had fractured all the way along its length and the middle pipes sleeve was bolloxed too. Rich had to remove and replace the whole system to get it all lined up properly. Its very quiet now though, whcih I am thankful for! I shall be on the lookout for a (hopefully genuine Citroen) downpipe over the next year or so.

Rich discovered that one of the steering rack gaitors has split, so that has to be done too (which is apparently a real bitch of a job to do - like the clutch cable!) So got wheel bearings to do, drop links, gear linkage, speedo cables, temperture gauge and a couple of other little fiddly jobs (if they haven't already been done) and an MOT which is booked for friday.

After all this work it should be an awful lot nicer to drive! I look forward to getting some miles done in it, in comfort and style

Need to look out for any deals on tyres, the michelins on it are too big (185/65) and have started cracking, making the ride a bit crashy - so I will get some of the correct size (which I think is 175/65) new rubber on. Anyone know of any deals around and about?
I'm not a Saint, or a James, but a Tom Saint-James!