I use a local guy to me who was super reliable, don't know how far south he goes.

I would report him to shiply Tom
Lots of Motors, mostly semi broken....
Top

Time for a little update I think. I've not heard from the transport company for a week or so, I think he may have blocked my phone number too. So I opened a shiply support ticket thingy, and they responded saying they're a neutral platform for customers and transport providers to meet and organise so don't get involved in disputes, which is quite poor seeming as they charge 25% on top of the delivery cost!

So, I have had to resort to legal action as the guy has £780.40 of my money and I cannot get in contact with him, i'm usually a laid back, relaxed person but this has got me really quite cross. He has until 29th July to respond to whatever the court sends him, hopefully it won't go to a hearing (an additional £80), I can't see as to why he would want that as from my view he doesn't have any legs to stand on!

So i've organised someone else to collect the BX, it's costing me £150 more, but is a much more professional outfit and hope to collect this weekend or early next week - I should hear from them today with a date. So we're back on! Now I am absolutely skint though, this BX is going to have to earn me some money...
I'm not a Saint, or a James, but a Tom Saint-James!

If you do end up breaking it, I'll stick my hand up for grey interior bits if it's got anything compatible with mine. Hopefully the new transporter works out a lot better.
Top

vulgalour wrote: ↑
Fri Jul 12, 2019 7:58 pm
If you do end up breaking it, I'll stick my hand up for grey interior bits if it's got anything compatible with mine. Hopefully the new transporter works out a lot better.

I’m after N/S rear black tinted quarter window, has been broken and repaired at sometime, but I think will be a bitch to remove, also N/S front wing if possible
Top

20190715_213606.jpg
Has landed, medium sized inconveniences occured - update tomorrow, had to do quite some pushing, with wasps. Shagged now!
You do not have the required permissions to view the files attached to this post.
I'm not a Saint, or a James, but a Tom Saint-James!

That looks way to nice to break, I hope it starts and runs!

There was a challenge with the delivery, the OH was at home for 20 mins after work before going out, and guess when it was delivered? Yes - in the only 20 mins of the whole day when there was the OH's car on the drive... So because our road is very narrow with limited parking, the driver had to drop it off way way down the road, whilct holding up neighbours in both directions, apparently. Poor driver! Sounds stressful, but the OH didn't hear the doorbell, if it was rung. The car was left right at the bottom of the road.

We then had to push it over the bump onto the drive, luckily this is a little bit downhill so we got some momentum going - steering was a bit interesting! It was quite heavy, as to be expected in a non-running hydraulic Citroen.

The car itself is filthy dirty, dusty, crusty seats etc etc. BUT is NOT SHIT! I've not gotten under it yet, but aboveboard it all seems remarkably good, all the electrics i've tried work, i'm not brave enough to try the sunroof yet but all the window motors work, the fan works, central locking all works, the dash (nearly) all lights up. Not tried any of the exterior lights as most bulbs seem to be gone. The front door hinges and rear door shuts aren;t rusty, so that bodes well for the underneath, that'll be the deciding factor if it is broken or not (and if the engine can be made to run , if I can register it over here without a Carte Grise, if the hydraulics aren't busted... etc). I only really want the a/c for my GT so as long as I can get some monies back for it.

Best dash! Shame my GT has a conventional CX GTI version, with needles and dials etc, not the really cool rotating drums...

So it doesn't turn over, just clicks and all the dash lights go out. There is definitely enough juice in the battery, it came of a sprinter ambulance (so a BIG FRO battery) and is fully charged, just incase I hooked it upto to the Venga of boringness with no difference. So could it be a starter motor issue? Bad starter earth/contacts? Perhaps not as all the other leccys work. My other though was the gear lever, being an auto I imagine there will be a switch to stop it starting if it isn't in park (maybe neutral)? The gear lever doesn't feel very secure/tight but does move freely up and down the run. I'd appreciate advice here guys as if I can get it started and lifted, I can see underneath.

Is all quite exciting!

That looks great, why don't you just keep them both and save the hassle of swapping the aircon over, my DTR and GT both have sunroofs,.

You may find giving the starter a good twang with a hammer will help, after you've checked all the connections.
Lots of Motors, mostly semi broken....
Top

What's the story with the wasps? They couldn't have been much help pushing

If it wont turn the motor and the lights dim out it could be the starter I suppose or, you don't want to know this, a seized engine. Check that by getting a spanner on something and trying to turn the engine.
The easy way to start is to run a lead from the battery to the starter solenoid connector BUT as it is an auto be really sure its in park AND disconnect the ignition so that it will not fire up.

It looks to be a good'un by the way.
The Joy of BX with just one Citroën BX to my name now. Will I sing Bye Bye to my GTI or will it be Till death us do part.
Top

So I had a spare hour yesterday evening, and gave the TRS a preliminary clean. What a difference! Also, anyone know what a TRS 'SE' is? The badge looks the same font as the other badges but is all black, so unsure whether this is factory, dealer or aftermarket bling*. BTW these photos are quite flattering, there are lots of little scratches and marks, especially on the drivers side (LHD) although im hoping at least some will polish out. 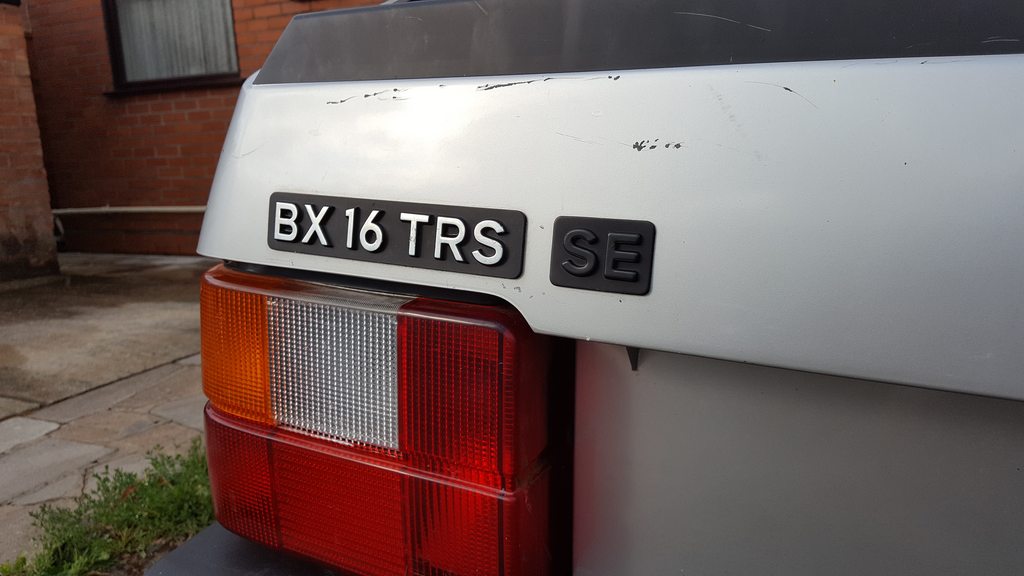 Drivers door dent pulled out a bit, still needs pushing from the inside but way better than before. 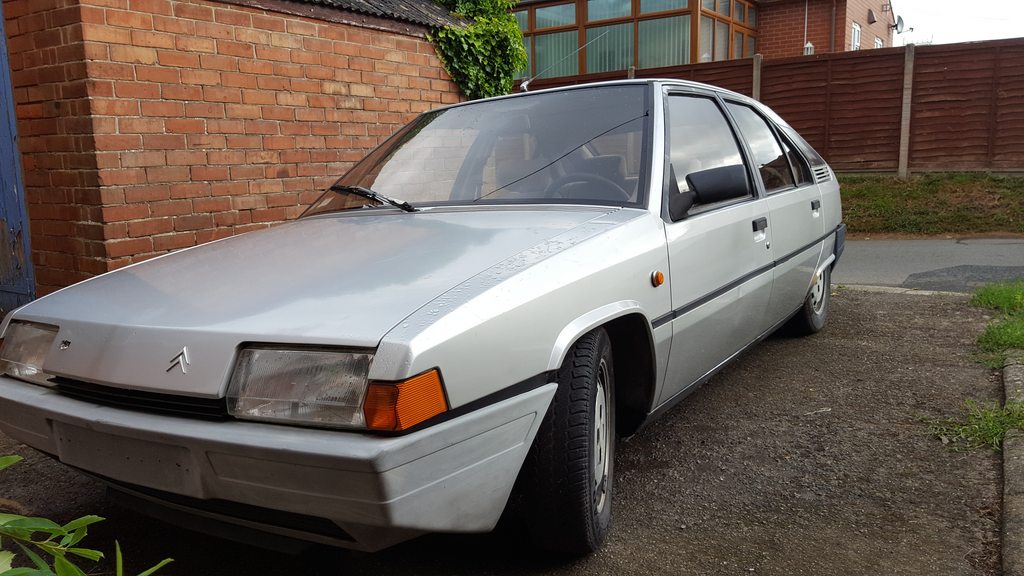 Wrong rear bumper is bothering me! Buthwat are the chances of finding a MK1 rear bumper in grey? Unlikely i'd say. 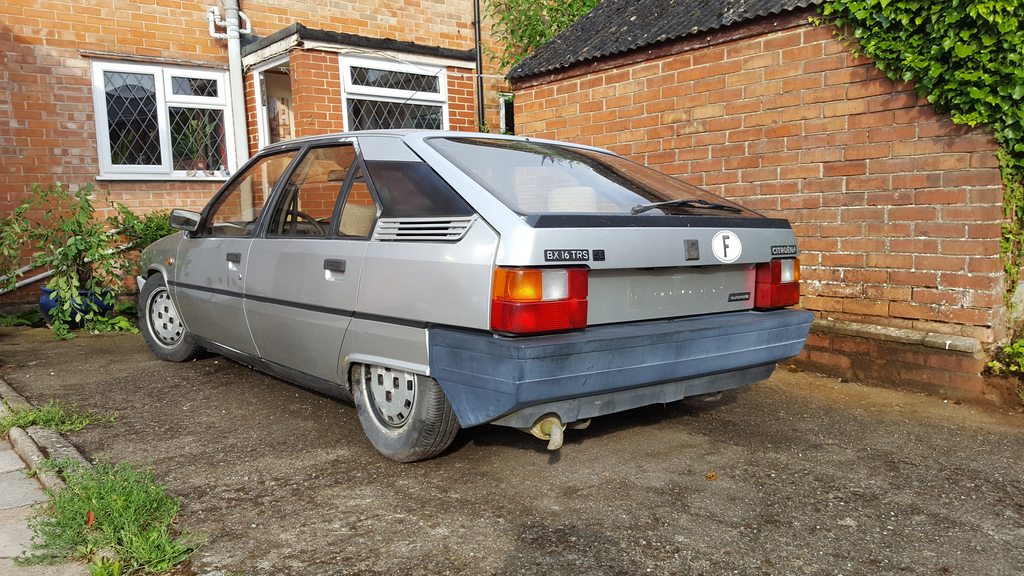 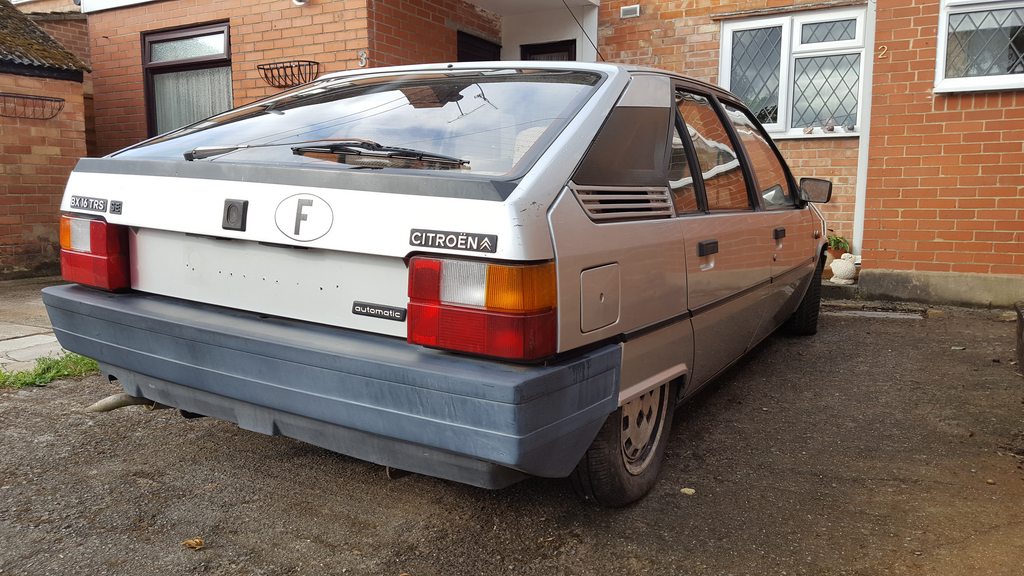 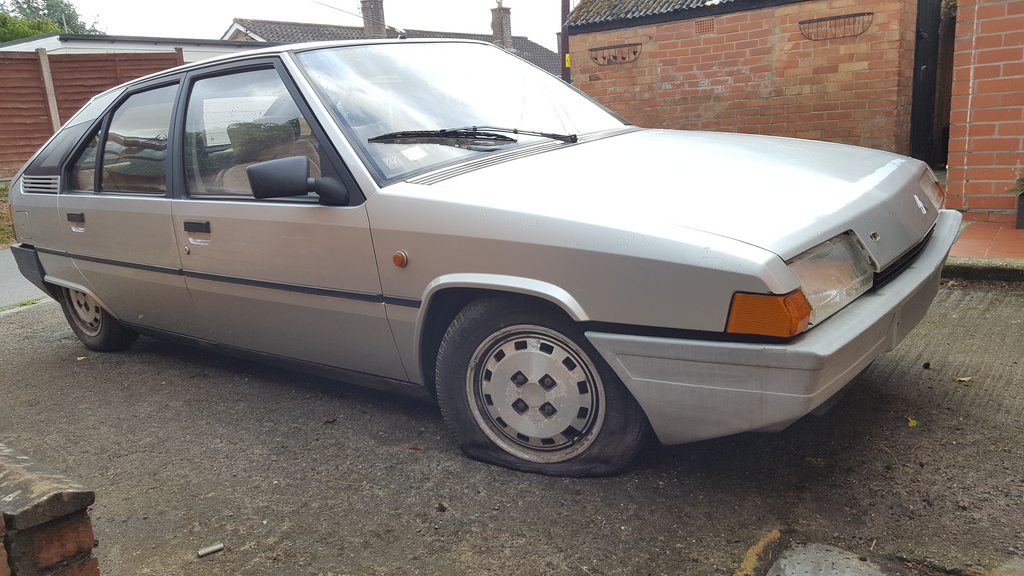 It's really not that bad... Don't know if I can break it, but really depends on how I get on with it tomorrow. If it deosn't run or has leaks - I can't spend much money on it, if at all, as it already owes me £850, and that money has comne out of my savings to get work done on the GT (which is my priority) and although this is a rare car, my GT is special, even if just to me. But if can get it through an MOT with not much spend then that's a BX saved, and a rare one too