To be fair, Scotland can be one of the most stunning places on earth. The scenery is entirely different to anything else I've found in the UK. Frankly at times, it doesn't feel much like Earth, let alone Britain! (landscape gets a bit lunar in places).

We're really looking forward to the Scottish trip. A weekend jaunt in Wales is still on the cards too...
www.classichub.wordpress.com
Top

Right, back to the car!

Then I turned my attention to the heater controls: 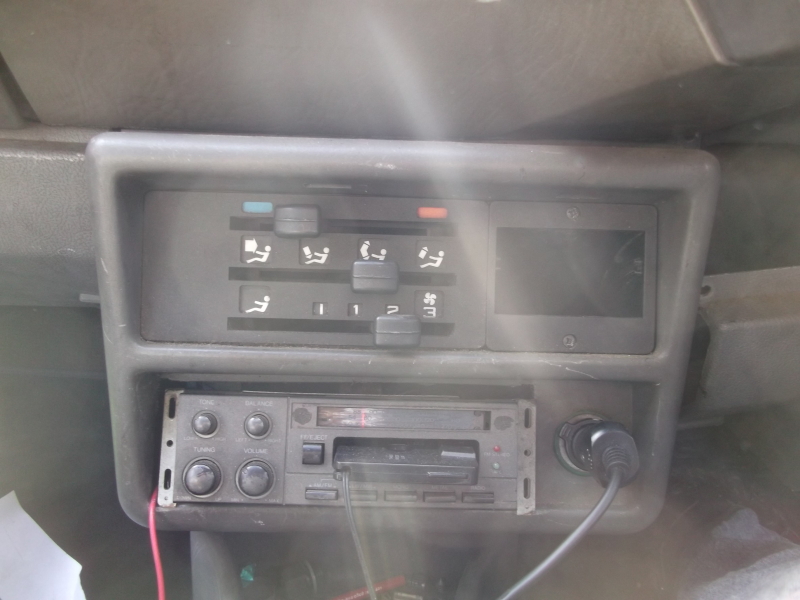 I'd been told they were back lit, while I thought they had overhead lights - turns out it seems to have both, but non of it works: 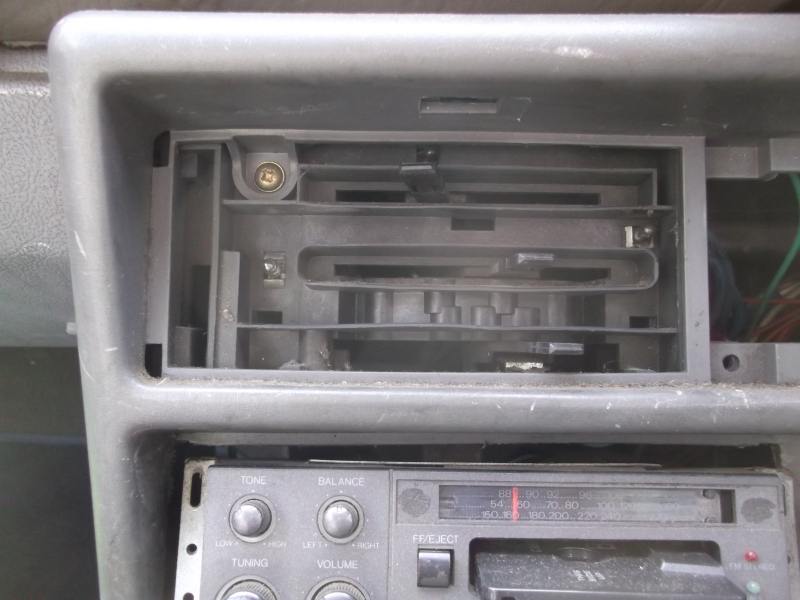 I only had 2 spare bulbs to hand, so I put them here: 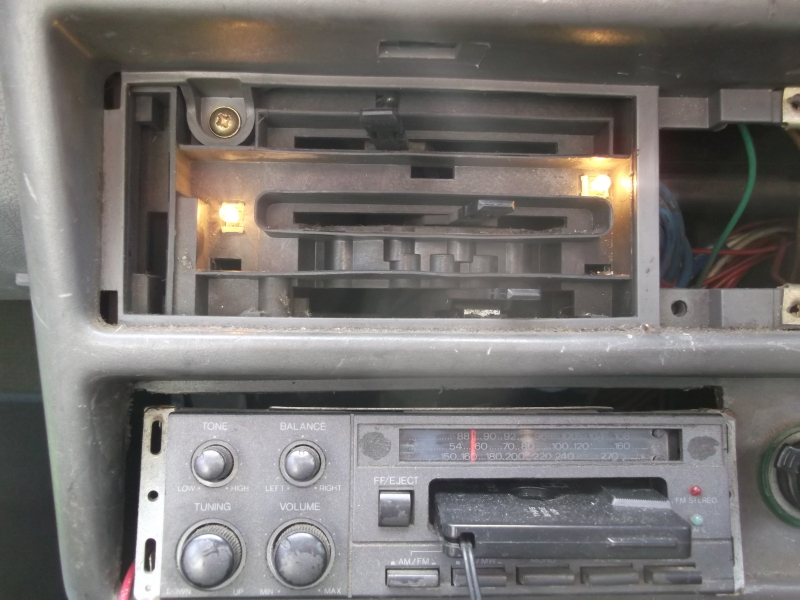 In the pic above, you can see another bulb just above the top slider, while the one below shows the cutouts in the top of the surround which seem to have lenses in. 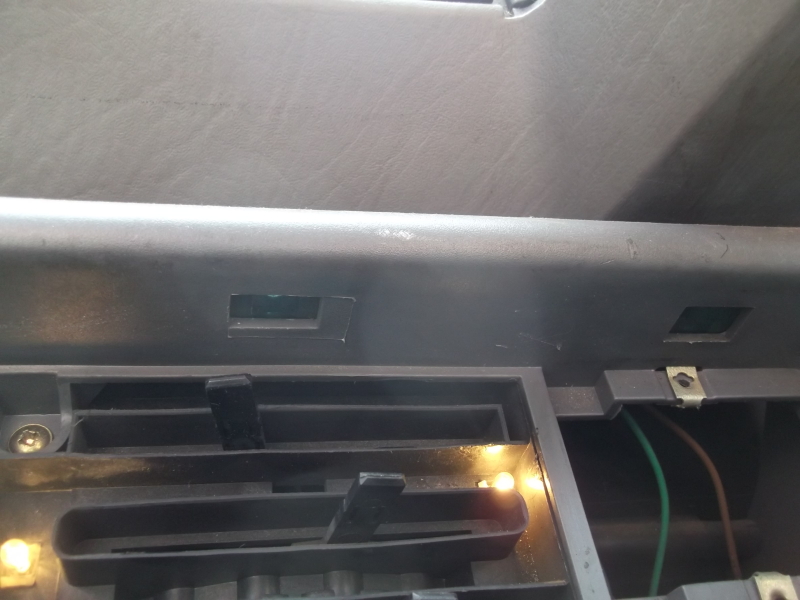 I'll have to pull this apart further once I get some more bulbs, and will try to sort out the blower controls at the same time. I'll even try not to forget the diffuser round the central slider on reassembly this time

If it makes you feel better, my new BX has one working bulb in the instrument binnacle and that's it! No illumination for half the speedo, the rev counter or the heater controls. I discovered this in the dark last night...
www.classichub.wordpress.com
Top

Managed to check the dash in the dark tonight - I can see the fuel gauge (just!) 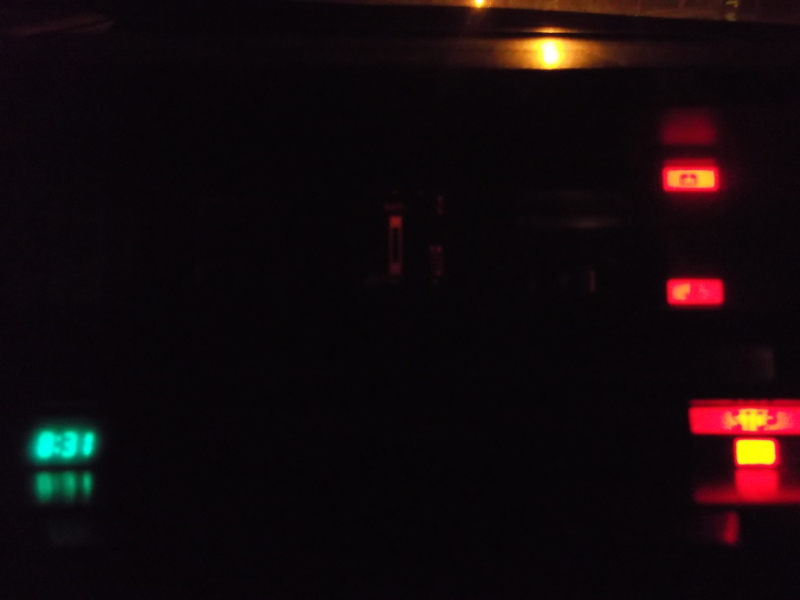 Heater controls are looking better too 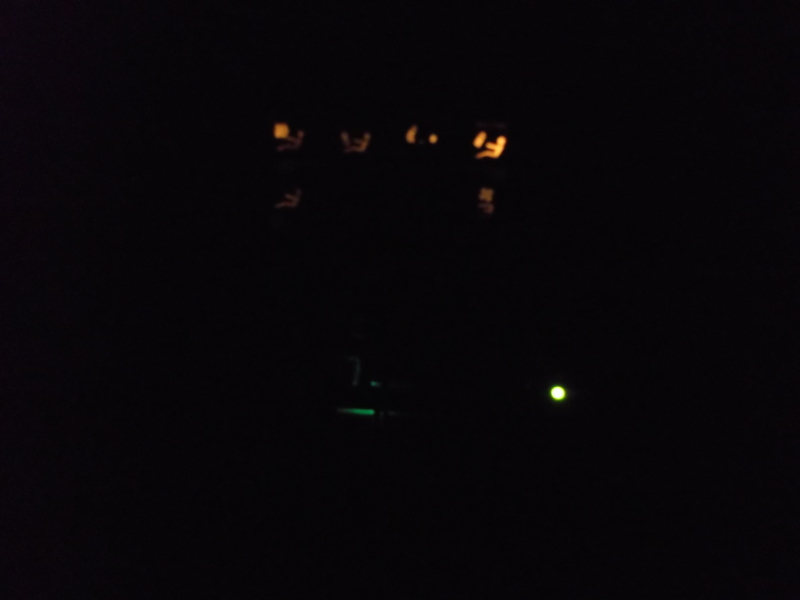 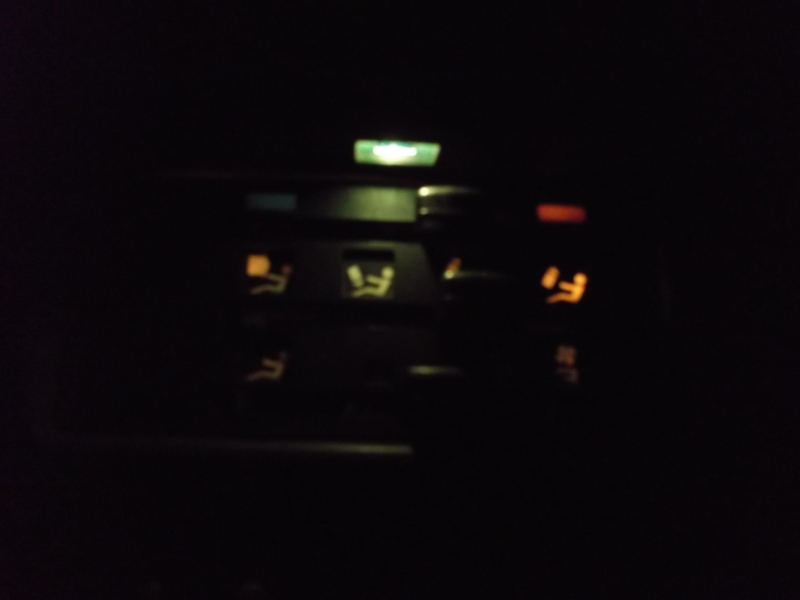 Just 2 more to go - the downlighter for the ashtray is missing the bulb holder, and I ran out of daylight for reassembling the fag lighter. 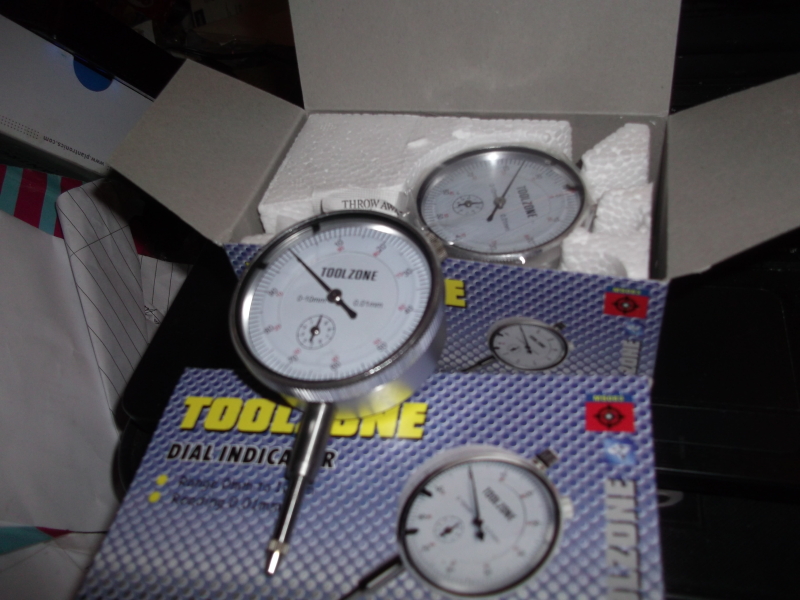 Just a draw when Timex still was at Heuliez's : Some little differences can be seen

Must be a concept drawing of some kind I suppose - looks almost like wrap round rear windows, which I guess were too costly.

Bit of a frustrating day today, although some headway was made. I decided that I needed to try to get the rear wiper and demister working, so started by removing the trim from the tailgate. With it removed, a couple of interesting details were found - A Heuliez badge and a 1985 date stamp on the trim - I assume Ian swapped he trim when changing the tailgate, which is dated 1987: 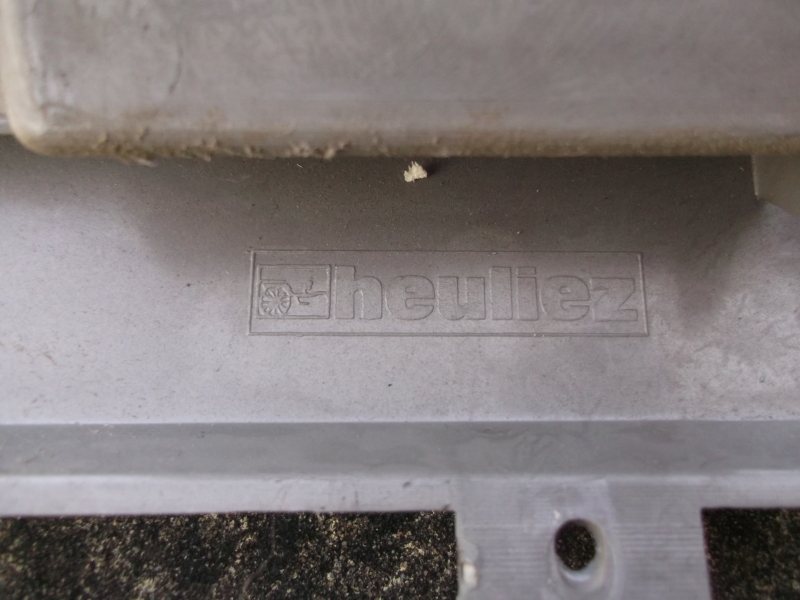 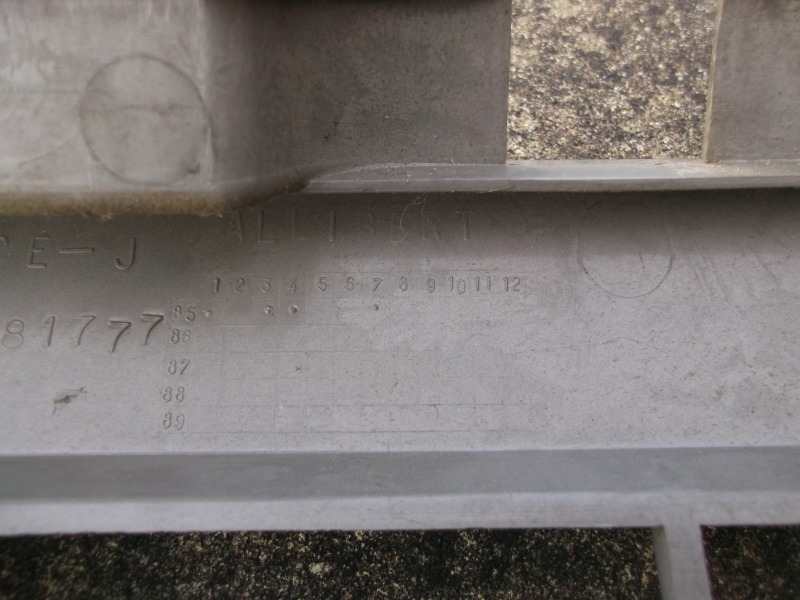 This enabled me to work out the wiring route - this is the wiring for the demister: 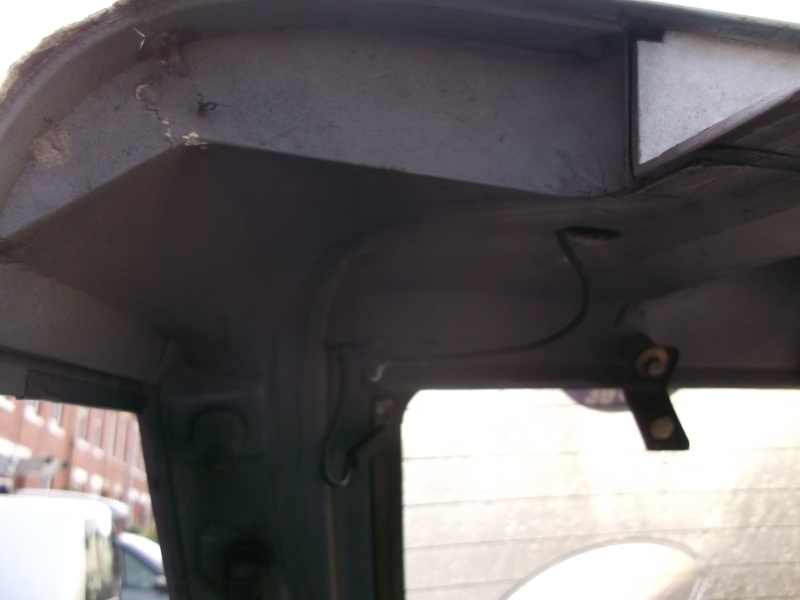 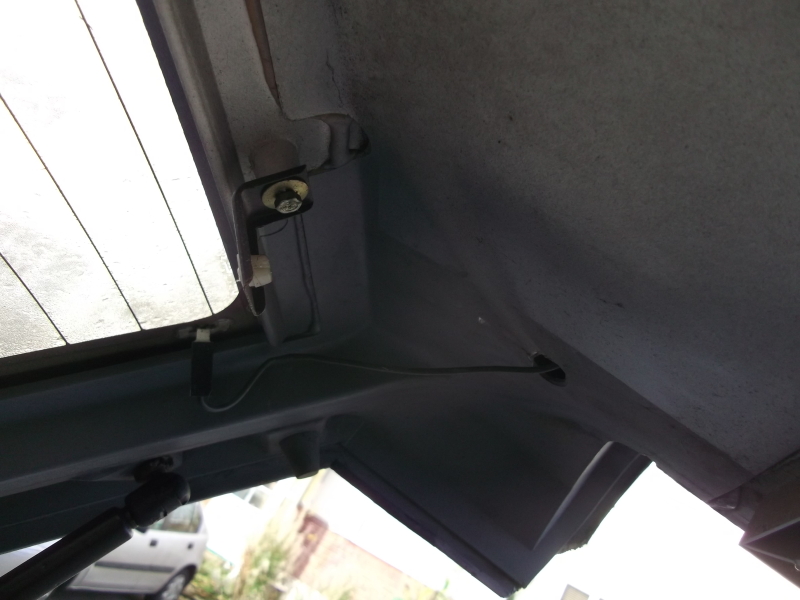 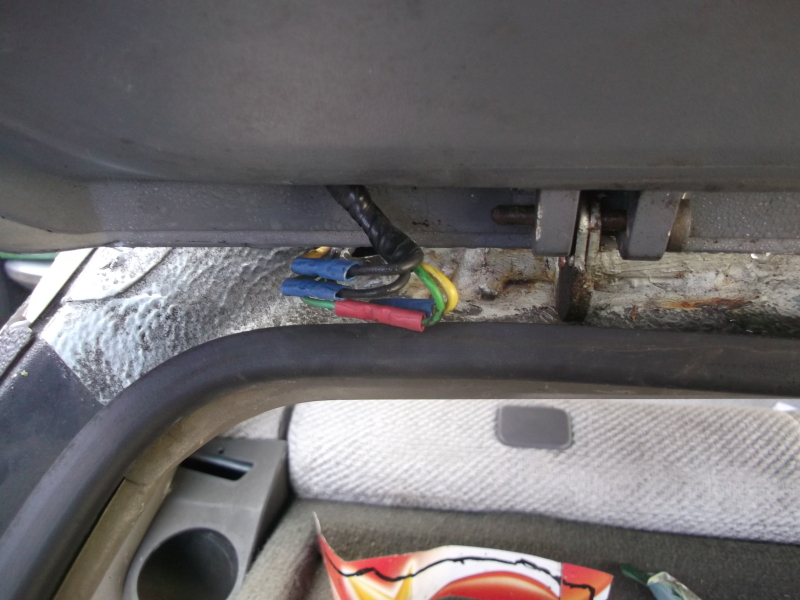 The demister panel itself checks out, and apart from a couple of switched earths, the wiring looks good, but there doesn't seem to be any power at the rear of the roof. The switch works and the relay clicks so I'll try to find another relay to swap in, then start checking contacts.

I then tried looking at the wiper mechanism. There are 4 wires at the back of the roof, 1 earth, 1 ignition controlled supply and 2 that seemed to be operated by the switch on the dash.

The connections on the motor didn't make much sense either - I had an earth, a motor supply, but nothing on any sort of parking circuit, and I don't know why I have 4 wires, so I started to strip the motor: 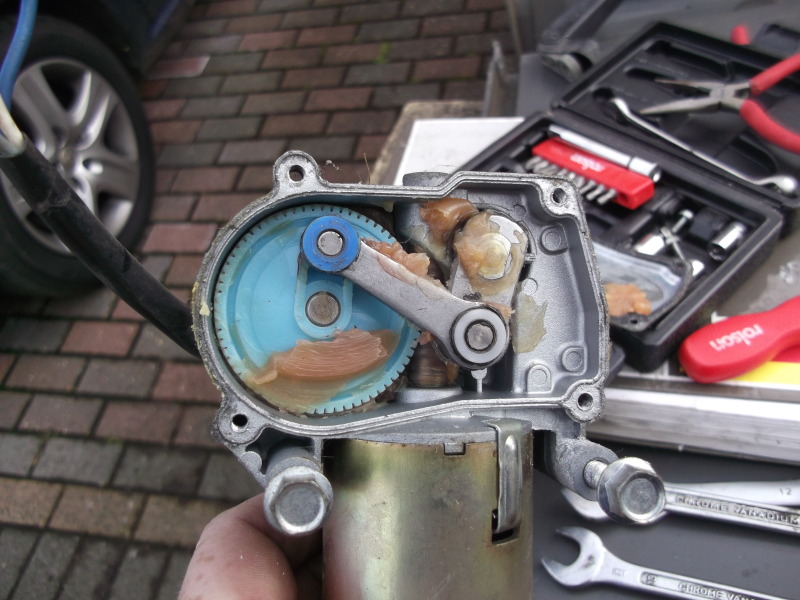 Under the big blue gear is a circular track with 3 contacts, which was covered in grease: 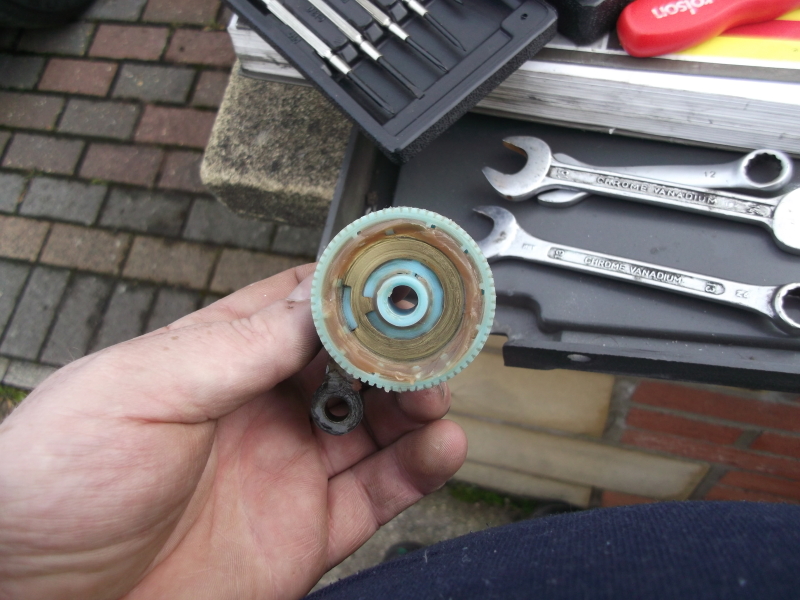 After cleaning the grease off the continuity checked out, so I reassembled and replaced the motor. I then had a look at the wiring diagrams in Haynes, and realised that the 4 wires were because the motor also operated with the washer

.That still didn't explain the behavior of the wiring, so I located the relay (which wasn't where Haynes said it would be

) and pulled it. It rattled when I moved it, so I removed the cover to find it was knackered: 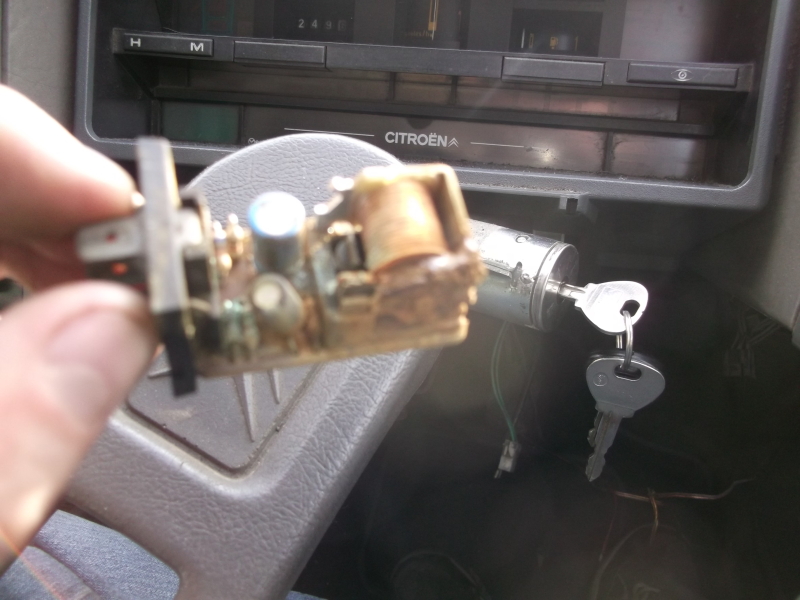 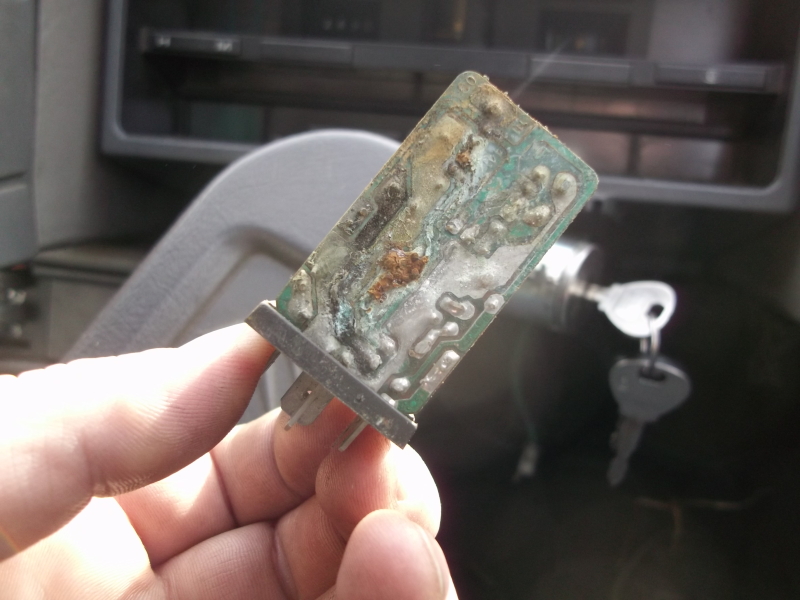 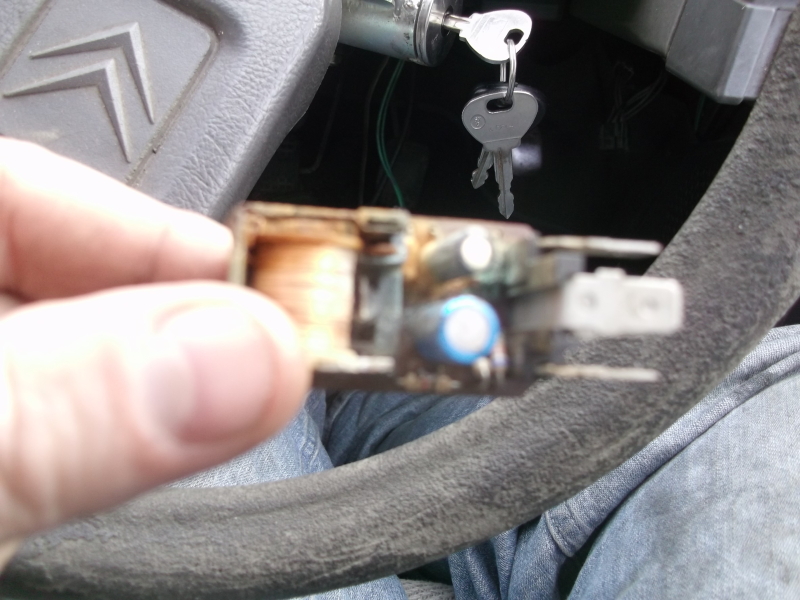 That's another item for the shopping list then! I did briefly swap in the relay for the front wiper, as this seems the same, so I'm tempted to try the relay mod mentioned elsewhere on the forum and use my old relay for the back.

Finally, and the only real progress of the day, will have the purists cringing: 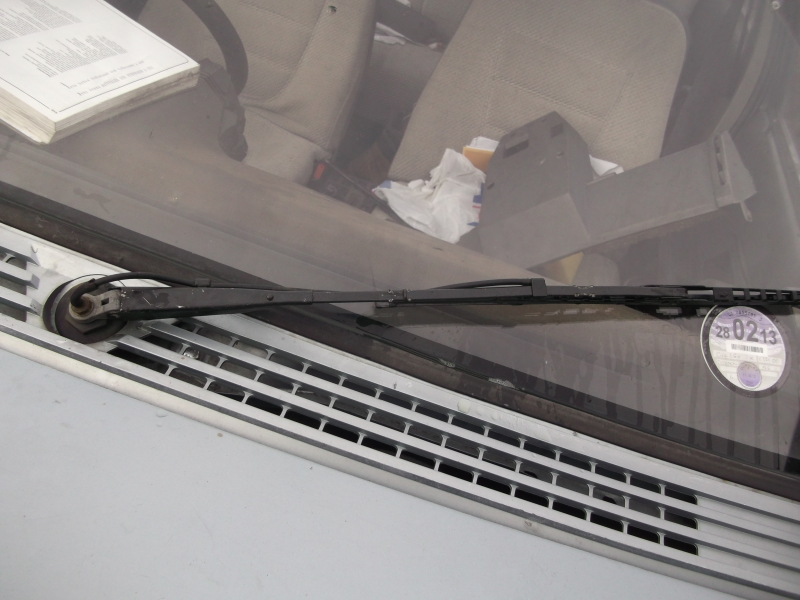 The spray bar was split in 2 and most of the jets kept blocking. I tried joining the 2 bits together with as little success as I had getting another one, so until I find one I've fitted this jet from a Merc. Sprinter, which was a few quid on Ebay. It doesn't have the coverage of a good spray bar, but it's better than what I had.
Mike Sims
BX 19RD Estate Mk1 - Timex!
BX 4X4 Estate - Oh god, I've done it again!
BX 17RD MK1 - it called to me!
BX14 TGE, - SOLD
XM Turbo SD,GS Club Estate,Visa 17D Leader,HY Pickup,Dyane Nomad,Dyane 6,2CV AZL,Falcon S,Trabant P50,3x Land Rovers (88" series 1,109" series 2a FFR,series 2a Marshall ambulance),DKW F7, Lambretta LD150 x 1.5,Mobylette SP93,Ural Cossack,Ural M63,CZ 250 Sport,Honda Varadero 125,lots of bicycles & tricycles including (but not only) Sunbeams,Higgins & Bates!
Top

Just remembered. I did experiment with wiring up the rear wiper. I got it to move 1mm and nothing more, so gave up.

Pretty sure I did swap the trim over on the tailgate. In fact, I think the newer tailgate came bare.
www.classichub.wordpress.com
Top

There was 1 wire connected, but I wasn't sure if it was right, so I started from scratch.

I managed to get the motor to run connecting the ignition controlled feed to the blue connector on the motor (to the brushes) and the earth connection to the wire that had been connected by you. Wouldn't work off the switch though, and I think I had the motor wired back to front!

The track on the blue gear is obviously part of the parking mechanism, but it's connected to the body of the motor. Unless I've got my thinking wrong, this means the ignition contolled feed is connected to the stepped part of the track that controls the parking, the switched feed goes to the continuous section, the washer feed to what I thought was earth, and earth goes to the brushes. 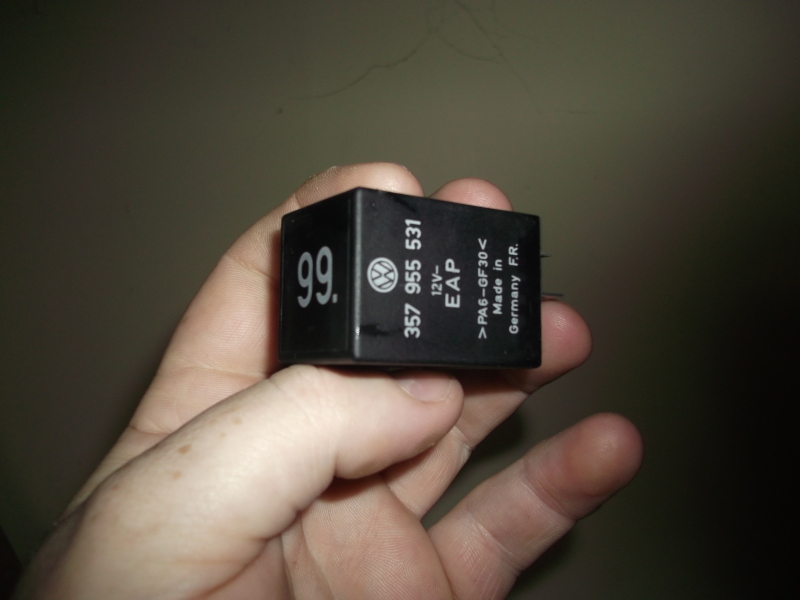 I swapped it with the original wiper relay and can now alter the wiper delay.

The original relay then replaced the rusted out one for the rear, before I had another go at the wiring at the back. I'd forgotten to take a pic of the date stamp on the tailgate so did this time: 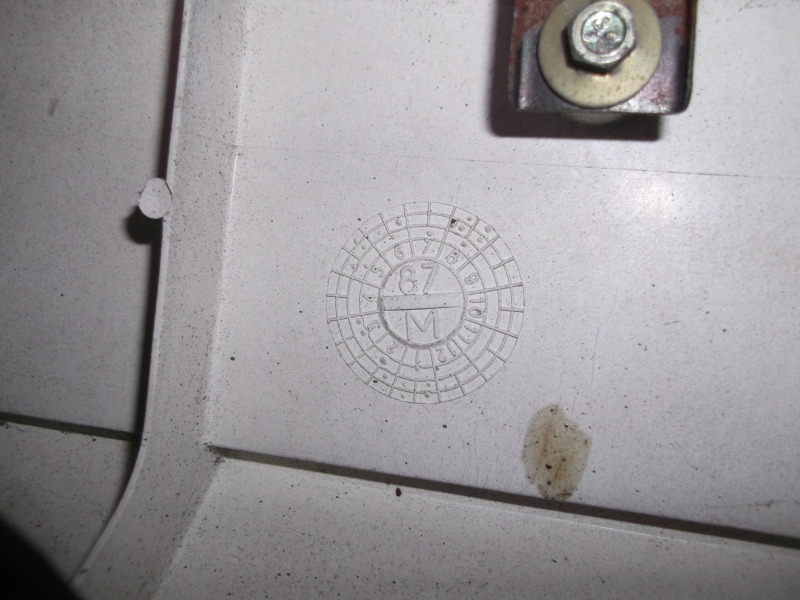 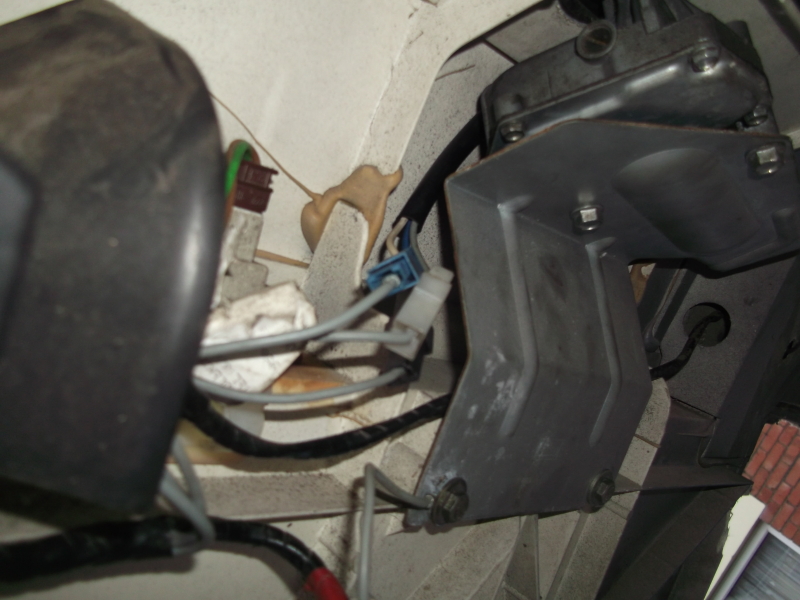 After a bit of checking with the multimeter, plus a bit of guesswork, I tried the wiper, and got a response as follows (click on the pic):

It's not perfect - for some reason the park isn't at the bottom of the stroke (possibly because I have a couple of wires crossed), and I had it in my mind that the rear wipe on the estates were intermittent.
Mike Sims
BX 19RD Estate Mk1 - Timex!
BX 4X4 Estate - Oh god, I've done it again!
BX 17RD MK1 - it called to me!
BX14 TGE, - SOLD
XM Turbo SD,GS Club Estate,Visa 17D Leader,HY Pickup,Dyane Nomad,Dyane 6,2CV AZL,Falcon S,Trabant P50,3x Land Rovers (88" series 1,109" series 2a FFR,series 2a Marshall ambulance),DKW F7, Lambretta LD150 x 1.5,Mobylette SP93,Ural Cossack,Ural M63,CZ 250 Sport,Honda Varadero 125,lots of bicycles & tricycles including (but not only) Sunbeams,Higgins & Bates!
Top

Any chance of a pic of where the relay lives Mike?
Mark Smith

Yes : Well done Mike : in a 14 seconds video being able to explain ,to show the button on the board , then to press it to make ear the noise of the liquid getting out AND arriving at the back of an old looooong Timex BEFORE the end of the movement of the intermittent windscreen , that can be considered not only as an achievement but as an exploit !!!!

Any chance of a pic of where the relay lives Mike?

Will do tomorrow, but in the meantime the front one is on the fuse panel to the right of the flasher relay, and the rear one is by the drivers A post behind the lower edge of the dash. It may be because of it being a Mk1, but according to the relay location chart in the Haynes supplement the flasher and front relay locations are switched, and the rear relay is buried in the middle of the dash somewhere!
Mike Sims
BX 19RD Estate Mk1 - Timex!
BX 4X4 Estate - Oh god, I've done it again!
BX 17RD MK1 - it called to me!
BX14 TGE, - SOLD
XM Turbo SD,GS Club Estate,Visa 17D Leader,HY Pickup,Dyane Nomad,Dyane 6,2CV AZL,Falcon S,Trabant P50,3x Land Rovers (88" series 1,109" series 2a FFR,series 2a Marshall ambulance),DKW F7, Lambretta LD150 x 1.5,Mobylette SP93,Ural Cossack,Ural M63,CZ 250 Sport,Honda Varadero 125,lots of bicycles & tricycles including (but not only) Sunbeams,Higgins & Bates!
Top
Messages: 382