citsncycles wrote: Went to collect the back door I won on Ebay today, and ended up with a pair of rear doors plus a drivers front door in cream. One back door has a dent in it and is missing the quarter window and some trim, but the other 2 are pretty good, and will at least give up their rubbing strips even if I don't use the doors. I also have some Mk2 R / TG spec door cards in brown that are surplus if anyone wants them. I'll hold off deciding exactly what to do with these doors until I get the other doors that are coming my way!

The guy had some other bits that I didn't need (alternator, Mk2 dials, Mk2 upper column, Mk2 hatch rear bumper in cream) plus some discs which he said didn't fit his car. He also has a turbo diesel hatchback in a mixture of white and cream which has killed its head that he can't decide whether to fix. I've asked him to get in touch if he decides to get rid so that I can post the details here.

I think you must have been coming back from the same guy as I was going to when we passed on the A38! I got a sunroof wind deflector!
Hilary Stone

I think you must have been coming back from the same guy as I was going to when we passed on the A38! I got a sunroof wind deflector!

Ah yes - I forgot to post a 'Hilary Stone Spotted'! He did comment he'd sold one, and was quite surprised how popular they are!


oh, I know who you mean, he has a xantia now.. which is also, erm, a bit tired... Raphael, nice enough chap, but a bit odd with his running car on butter type stuff experiments!

I didn't think the Xantia looked too bad, particularly compared to my.... Oh, er,

I'm beginning to understand Ian's love/hate relationship with this car!

I filled up at Leominster on the way home from the Tech meet, and have since done just over 300 miles on around 2/3rds of a tank - I'd have had to fill up the GS by now, and would be well on the way through the 2nd tank by the time this needs filling up again!

), and I'm spending less time with my right foot buried in the carpet! It's still not right, but it's improving with use.

The list of jobs is growing though - now have a water leak somewhere behind the engine, not going anywhere far until this is sorted! It lit up the light of doom today, but I think I caught it before damaging the engine

In the aforementioned episode, nothing from the cooling fan - it has been working so I need to double check this now.

Also, the lock barrel is on the way out - when I took the key out, it needed lots of swearing and jiggling (of the key, not me) to get it back in, so it now has permanent residence - just as well it's no longer a 1 key car

It's nailbiting stuff. Lots of fab restoration projects going on at the moment

(Raphael ... I think I might have met him when I was working for a Citroen independent in Bristol over 20 years ago. He was quite bonkers then too if it's the chap I'm thinking of - probably in his late 50s now, if not a bit older?)
Diagonally parked in a parallel universe
1991 TZD hatch (Triton Green)
1992 Hurricane
Top

Not the same guy then - the one of the same name that I'm thinking of wasn't that tall.
Diagonally parked in a parallel universe
1991 TZD hatch (Triton Green)
1992 Hurricane
Top

Raphael isn't very tall, his mother lives over in France, has a part share in some vineyard or something... He had his red BX over there, but somene took it away and scrapped it, he wasn't happy...
He got the Xantia off the bay, and it's cost him a bit since...
Not sure how old he is actually, but I'd guess at mid 40's at least..

Which indy did you work for Sandre?
Smokes lots, because enough's enough already!

Well Timex went to see the Westons today - I managed to get a good look underneath, but forgot the camera

The spheres were a little flat - 40% charge in the front, and next to nothing at the back

One of the rears was US, but the rest took a charge OK - mmmmm, floaty

, although the GS is still a smoother ride!

As well as the welding jobs found already, there are 2 small repairs needed in the front floors - nothing major though

. Overall, much more solid underneath than it looks on top

Found the water leak! the heater hose above the lower engine mount has split at the engine end, plus the short joining rubber between the same area and a length of steel pipe running across the engine doesn't look long for this world either. It's got so bad that the water almost runs out as quickly as I can fill it

I've ordered the short piece from Citroen, but the heater hose is NFP, so the hunt is on for an alternative. Given the poor access, I'm planning on sorting this while the rack's out next week. speaking of which the control valve on the rack is leaking, so it's just as well I have a replacement. when looking at this, Andy said that looking at the state of the rack, it might be behind some of the hydraulic issues.

Also found the major source of the clonk on the front - one of the PAS ram bushes is completely, utterly, totally, absolutely, 100% shot! Also ordered from Citroen. One of the wishbone pivots was loose, so Andy tightened it for me.

I visited the Westons today to book the car in to have the spheres recharged, discuss some issues and see if they had any BX's they were breaking. Andy suggested that a pin in the pressure regulator may have got bent, leading to it sticking.

It may vary from car to car, but mine cost £50 with 3 recharges plus 1 replacement (the accumulator tested fine

) - not checked whether the replacement was new or recharged 2nd hand though, I just know it rides as it should

Managed a couple more jobs today - tried removing an interior handle from one of the doors I bought last week, but had forgotten about those bloody torx bolts - couldn't find my set anywhere

My mate John has kindly let me use a space on his drive to work on it this week, but as they're digging up his road tomorrow I tool it round tonight, after topping up the coolant again! I think the water leak is getting worse: 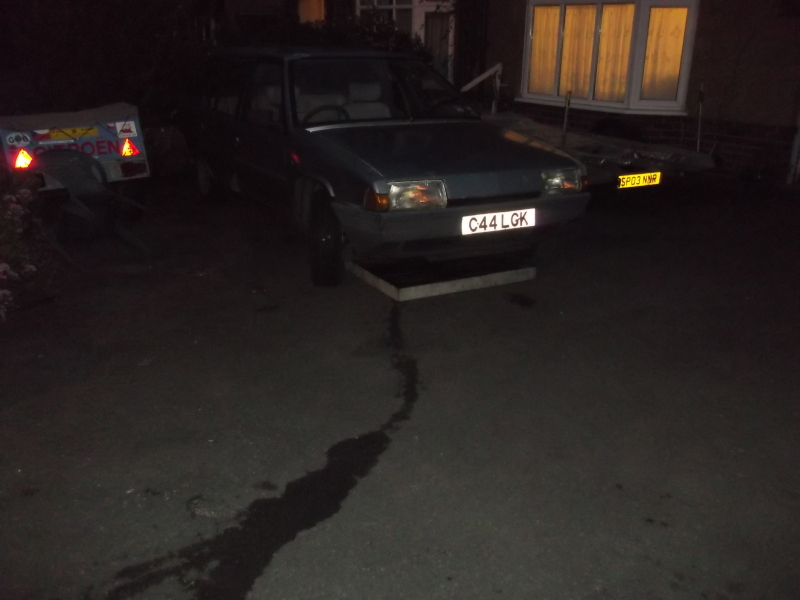 Let me know the part no. of the hose you require - I have a couple of heater hoses the dealer (incorrectly) supplied for a TD, so they may well fit yours, or at least be made to fit!

Thanks Mat, but I'll be seeing if I can get some silicone hoses tomorrow, as the one pipe Citroen could supply seems different to the car

Today involved lots of swearing an getting very, very oily! I changed a strut return pipe as the old one was slightly cracked: 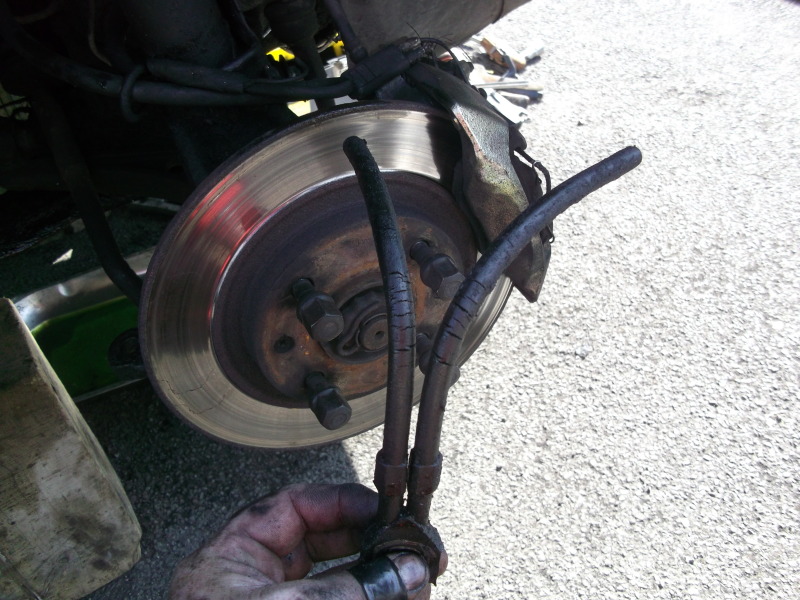 the new one actually went on better than I expected, as last time seemed to take ages!

There then followed an afternoon of fighting the steering rack, not helped by a less than helpful Haynes manual. The feed pipes in particular were stubborn, one of which seems to have unions that need an 8.5mm spanner

, and ended up getting cut

. It came out in the end though: 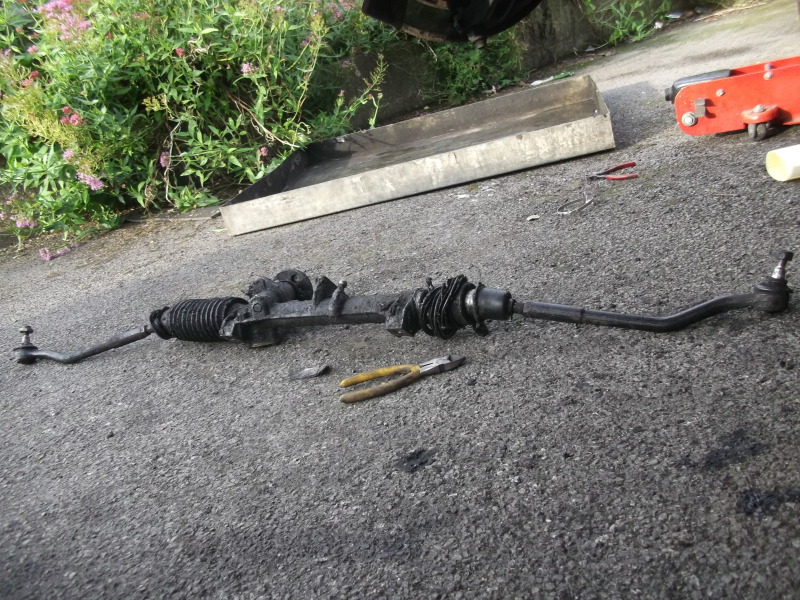 With the rack out of the way, I then removed the damaged hoses. The one that had actually failed came out relatively easily, but the joining pipe that wasn't leaking but looked about to fail was more tricky - in the end I removed the alloy casting on the back of the engine that both these hoses plus the radiator hose all attach to. It was when I was cleaning off some corrosion to the outlets (hopefully not bad enough to scrap the part

) that I made an interesting discovery: 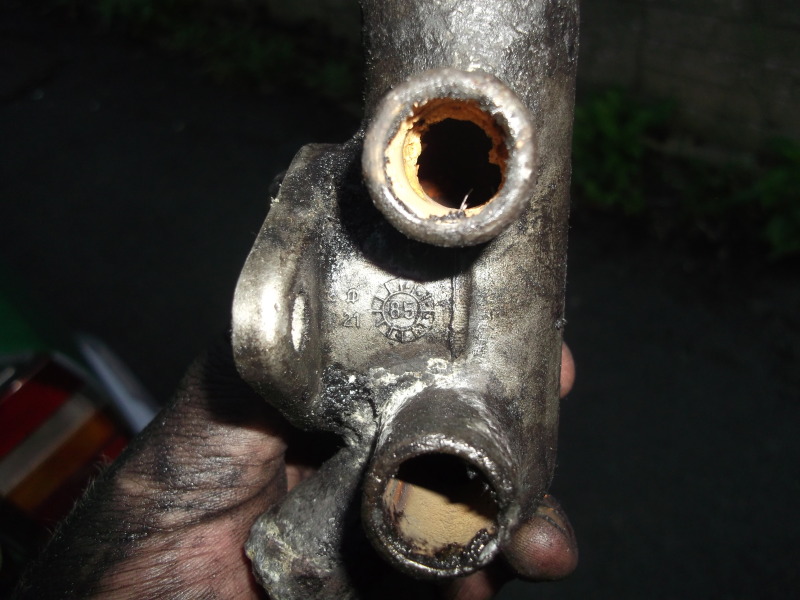 That's a date mark cast into the housing, and it's 1985! It seems that Timex may have it's original engine after all, but fitted with a later head

. I may have a lead on an early head, so watch this space!

So tomorrow starts with a shopping list, some of which is for these parts: 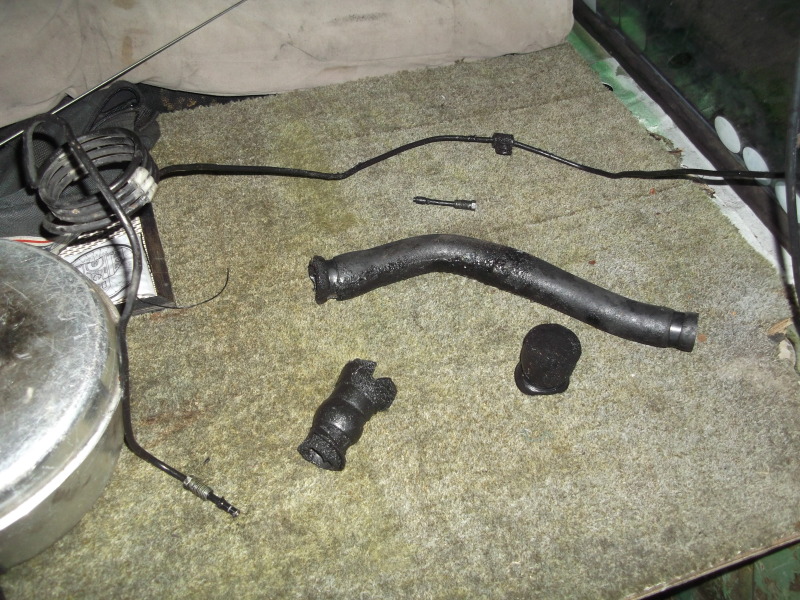 The blanking cup I'm replacing as a precaution due to the state of the other hoses - god knows how the joining piece wasn't leaking as it's in shockingly bad condition. Unfortunately the part I bought to replace it is both too long and too big a diameter, although I'm not sure if the latter is down to a design change or reduced diameter of the outlet on the casting as a result ofmy cleaning off the corrosion: 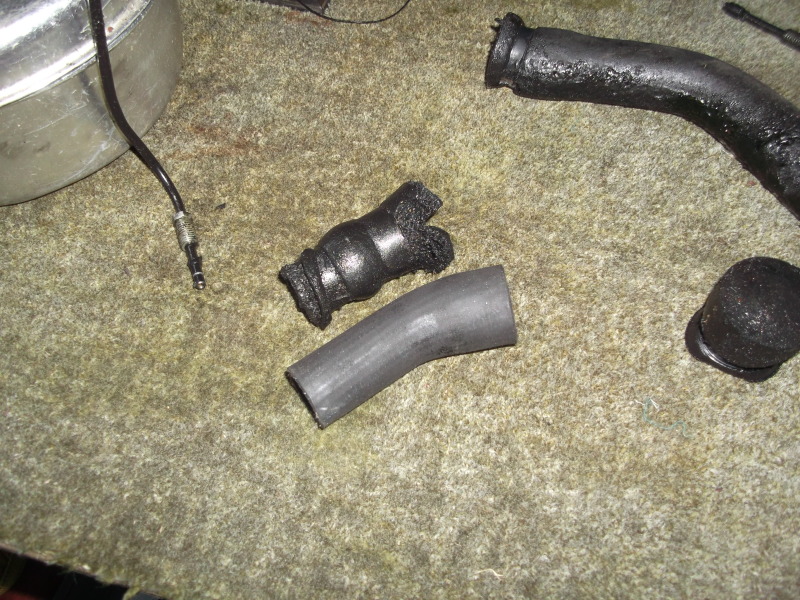 I also have to get a new return collar for the PAS ram, the old one split as soon as I tried removing the return pipe, and collect the wheels I sourced from Cam Tyres, who are fitting some (hopefully not too expensive) tyres to them.
Mike Sims
BX 19RD Estate Mk1 - Timex!
BX 4X4 Estate - Oh god, I've done it again!
BX 17RD MK1 - it called to me!
BX14 TGE, - SOLD
XM Turbo SD,GS Club Estate,Visa 17D Leader,HY Pickup,Dyane Nomad,Dyane 6,2CV AZL,Falcon S,Trabant P50,3x Land Rovers (88" series 1,109" series 2a FFR,series 2a Marshall ambulance),DKW F7, Lambretta LD150 x 1.5,Mobylette SP93,Ural Cossack,Ural M63,CZ 250 Sport,Honda Varadero 125,lots of bicycles & tricycles including (but not only) Sunbeams,Higgins & Bates!
Top

Nice work. Don't forget you've got a much nicer steering wheel to go on. I never actually opened the box it arrived in so I hope it's ok... (one of those perpetual 'I'll do that tomorrow' jobs!)
www.classichub.wordpress.com
Top
Messages: 382