Yep, TBH I was amazed this didn't get snapped up before I bought it. I know pickups seem to be less desirable, but there was another pickup a year or 2 earlier on ebay in the summer, in much worse condition which sold for around £1800.

Is there a more modern engine that will fit in one of these comfortably. Probably be a howl of discontent but for me Citroen were hamstrung by not having good larger engines. Their history seems to be continually not to have investment money left over to do this. The BX bangs bots because it has a good engine. Before that its all a bit strained. Bit like Morris getting the Austin engines to put in their 50's cars into sales success we have the BX get a Pug engine to really be the good car in the market place. Its pointless to have a world beating design if you are missing a vital part of the package. History is littered with examples.

I've seen several engine conversions on these - the problem is either not stressing the gearbox (which is already the weak link) or finding a replacement that fits the unusual layout. Engine conversions I've seen include:

2 ltr Ford Pinto (in a 6 wheeler the same people currently have for sale)
2 ltr Perkins Prima (as fitted to Maestros and Montegos)
2.2 ltr Indenor diesel and 4 speed 'box from a C35
Various Renault engines (usually diesel), usually with a Renault 25 or 30 transaxle
Rover V8 with Renault transaxle (big job including chopping the rails on the subframe)

Apparently by rebuilding a post '63 original engine (alloy crossflow head) to DS spec, you can get a decent power increase - some of this will work on the engine in mine, with a bigger increase.

You can also get gearboxes with a variety of modified ratios, and (if you can find one) an early DS19 4 speed box bolts straight in.

If the engine in mine is beyond saving, I'd give serious consideration to fitting either the Perkins Prima or the 2.5 Peugeot diesel that I have sat in the barn - making up the engine mounts will be easy, and I have a mate who would help with the adapter platead any flywheel mods that would be needed.
Mike Sims
BX 19RD Estate Mk1 - Timex!
BX 4X4 Estate - Oh god, I've done it again!
BX 17RD MK1 - it called to me!
BX14 TGE, - SOLD
XM Turbo SD,GS Club Estate,Visa 17D Leader,HY Pickup,Dyane Nomad,Dyane 6,2CV AZL,Falcon S,Trabant P50,3x Land Rovers (88" series 1,109" series 2a FFR,series 2a Marshall ambulance),DKW F7, Lambretta LD150 x 1.5,Mobylette SP93,Ural Cossack,Ural M63,CZ 250 Sport,Honda Varadero 125,lots of bicycles & tricycles including (but not only) Sunbeams,Higgins & Bates!
Top

I tend to agree. I also liked the thinking behind the Pinto engie, which was that although it revs much higher and has more BHP than the original engine, the torque wasn't any more, so it would in theory give better performance without stressing the gearbox too much.

I'm leaning towards the Perkins if I do have to change the engine, although I may well remove the turbo and run it as an NA. This will give less overall power, but a smoother delivery of power, especially at lower revs.

In other news, I pulled a few bits off this: 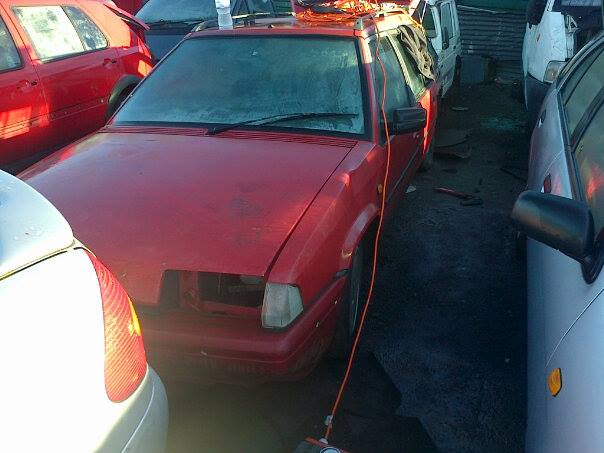 Apparently the block cracked due to lack of anti freeze last winter, then eventually ended up here - a pity as the body is good, which did atleast enable me to remove this wing: 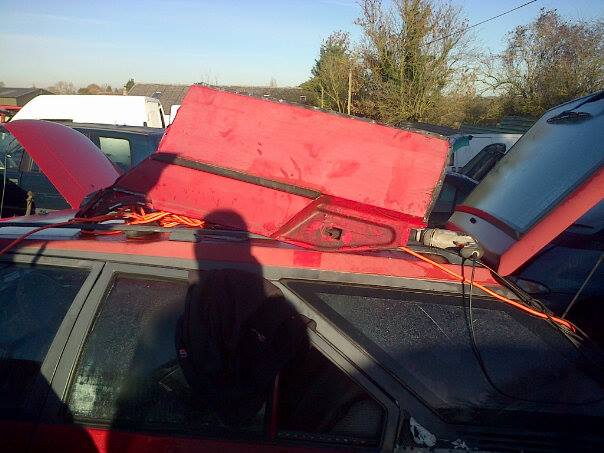 Needs a couple of minor repairs, but is far better than Timex's. This means that once I've collected a bonnet from the Westons and bought a couple of sills I have all the panels I need to rebuild Timex - I just have to get Fred sorted first!

As promised, here's some pics of the 2CV I've been working on: 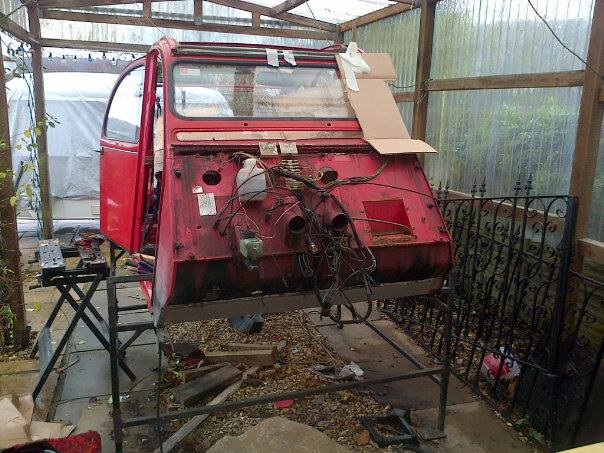 Body on a purpose made stand that myself & John Sobey went halves on at Registers day several years back. 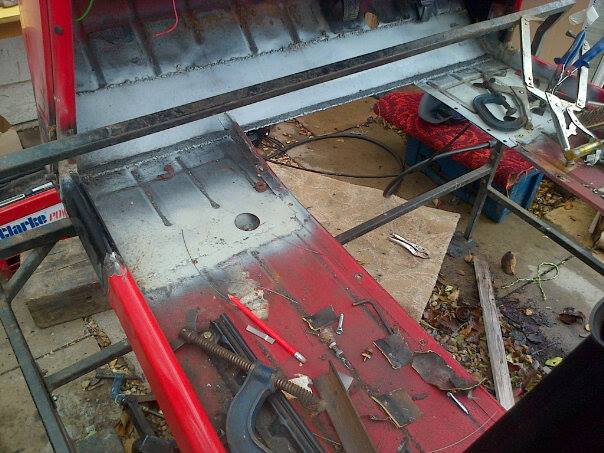 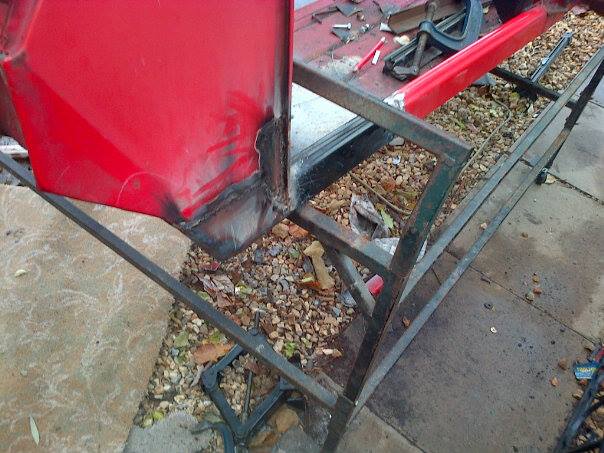 Bottom of the A post, the front of the sills, and the lower A panel were shot both sides 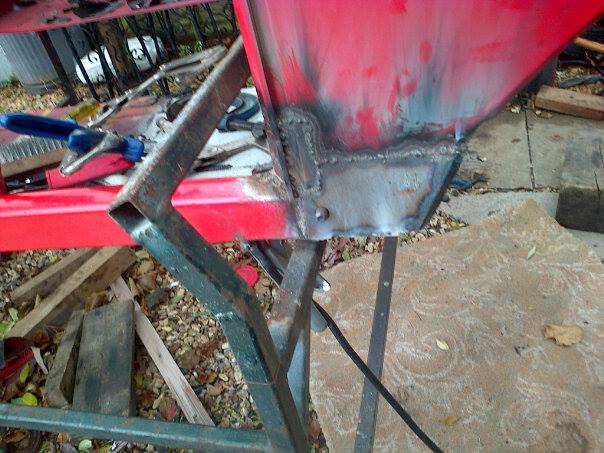 The Battery tray area also came in for some attention - why they couldn't just mirror the LHD cars I don't know! 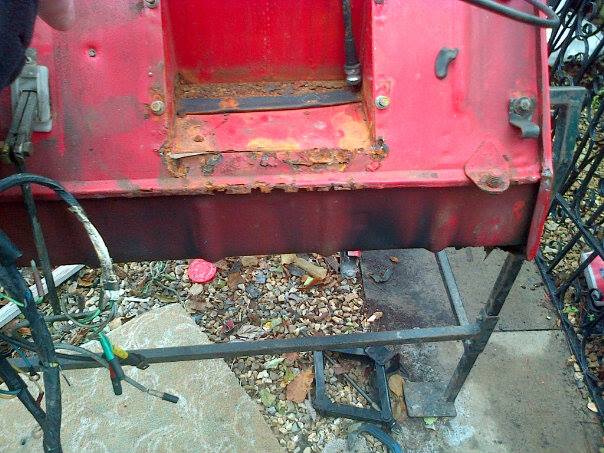 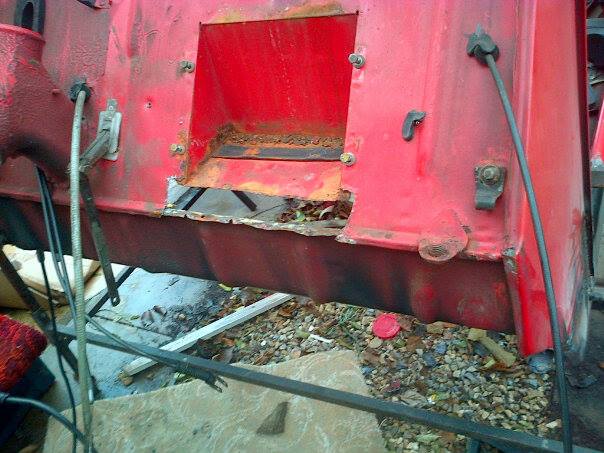 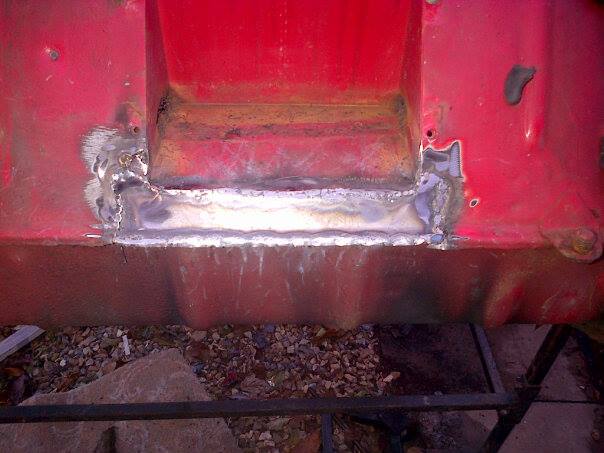 This is the area that caused most of the rot lower down! 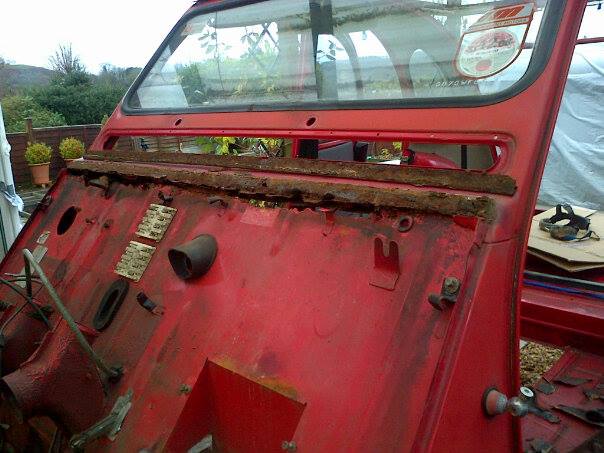 We're waiting for a part to arrive to fix the above, so I've been doing some smaller jobs like welding up cracks in the disc shrouds: 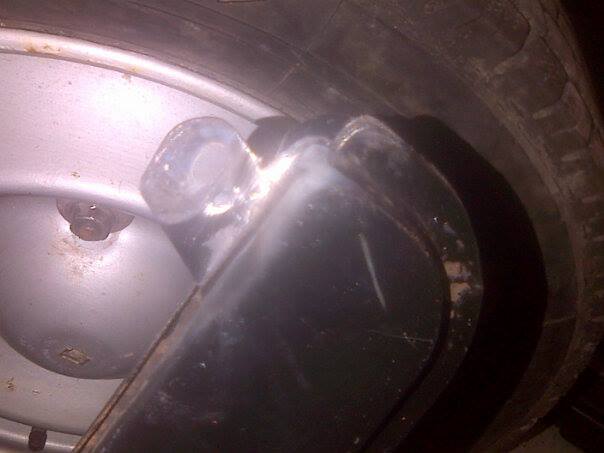 And repairing one of the bumper brackets. 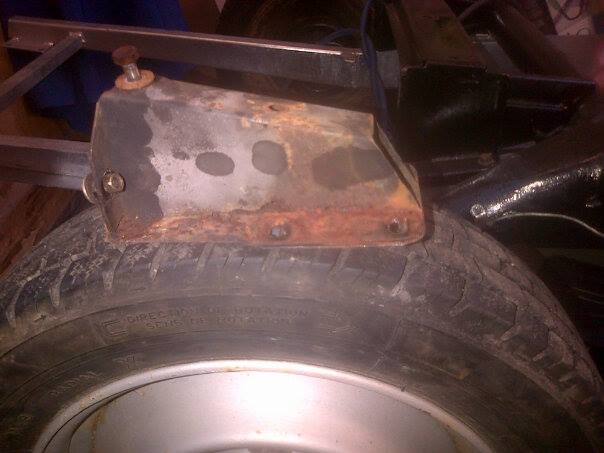 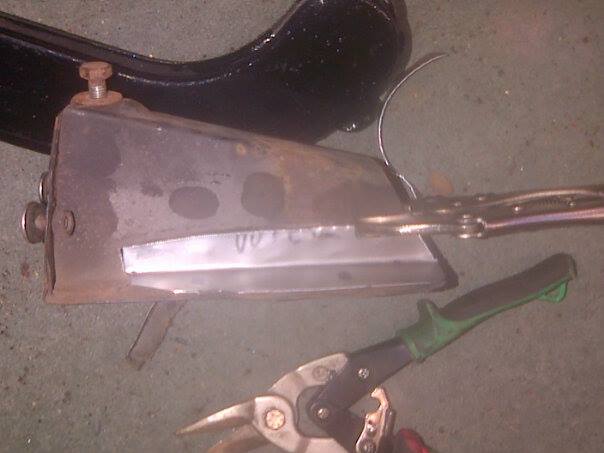 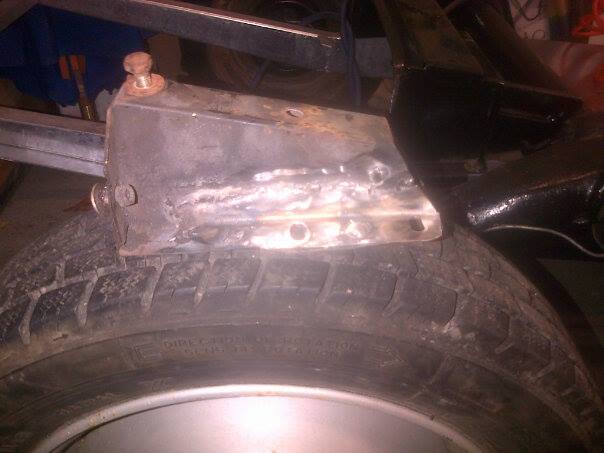 glad to see you bought the pickup - I couldn't believe the price and I was very tempted myself.

Have you seen these pics? 1.9 Audi TDi powered H>

Not sure if it's the same one, but I saw some pictures on Ebay a while back of an Audi powered on up for sale, although I thought it had been modified to take the Audi suspension aswell.

I must admit, Audi was another one I've thought of as they are another that uses a similar layout. Looking at these picsI think the electrickery above the passenger footwell has put me off a bit, although the gerbox may prove useful.
Mike Sims
BX 19RD Estate Mk1 - Timex!
BX 4X4 Estate - Oh god, I've done it again!
BX 17RD MK1 - it called to me!
BX14 TGE, - SOLD
XM Turbo SD,GS Club Estate,Visa 17D Leader,HY Pickup,Dyane Nomad,Dyane 6,2CV AZL,Falcon S,Trabant P50,3x Land Rovers (88" series 1,109" series 2a FFR,series 2a Marshall ambulance),DKW F7, Lambretta LD150 x 1.5,Mobylette SP93,Ural Cossack,Ural M63,CZ 250 Sport,Honda Varadero 125,lots of bicycles & tricycles including (but not only) Sunbeams,Higgins & Bates!
Top

About a decade ago we saw a Citroen H based market van at 'La Locomotion en Fete' with a 2 litre Perkins turbo diesel similar to a Montego fitted in place of the original (possibly a Perkins) diesel engine.
Apparently provided a boost to performance - it was lugging around something about 8 metres long though!
Paul in Normandy - BX 1992 Millesme 1.9D, 1999 Peugeot 806 2.1 TD (the Bus) - gone bang on the M25, in a scrapyard somewhere in the SE of England, 1985 Visa Decouvrable, 1990 Land Rover 110TD (Great Uncle Bulgaria),1999 Isuzu Trooper, 1991 Hymer motorhome with Peugeot J5TD power, and a shedfull of mopeds!
Top

Was contacted by the seller today to say that apart from the reciept from the guy he bought if from, he couldn't find the documents and did I still want the H. I rather suspect he was hoping I'd say no, because although he reassured me there still wouldn't be an issue registering it, he also said it was OK if I backed out as he'd since been offered more than the asking price for it. I put him right on that score by letting him know that John Sobey would sort an official CCC dating letter for me and confirmed I'd be collecting it on the 2nd.
Mike Sims
BX 19RD Estate Mk1 - Timex!
BX 4X4 Estate - Oh god, I've done it again!
BX 17RD MK1 - it called to me!
BX14 TGE, - SOLD
XM Turbo SD,GS Club Estate,Visa 17D Leader,HY Pickup,Dyane Nomad,Dyane 6,2CV AZL,Falcon S,Trabant P50,3x Land Rovers (88" series 1,109" series 2a FFR,series 2a Marshall ambulance),DKW F7, Lambretta LD150 x 1.5,Mobylette SP93,Ural Cossack,Ural M63,CZ 250 Sport,Honda Varadero 125,lots of bicycles & tricycles including (but not only) Sunbeams,Higgins & Bates!
Top

Did a couple of small jobs on Fred yesterday, in part to prep him for moving out of the local barn and onto my drive. He now has tyres that stay up and 1/2 a set of wheel trims: 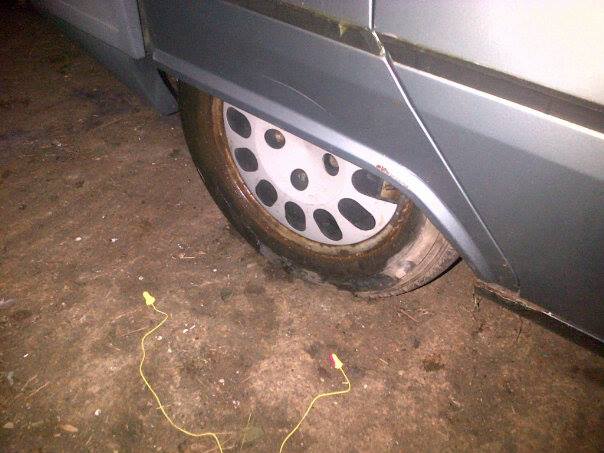 Having a look round I also spotted that someone had raided the fuse panel: 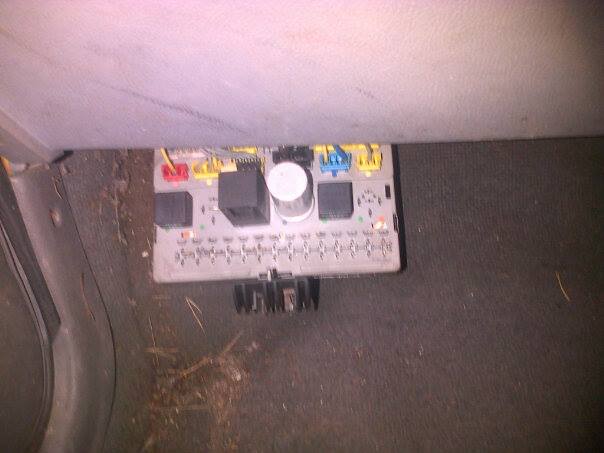 Using a big box of fuses and the owners manual, I refitted a new set of fuses, then found the relay cover in the footwell. Not sure if the 2 relay gaps need to be filled, but I'll try everything out one he's on the drive. 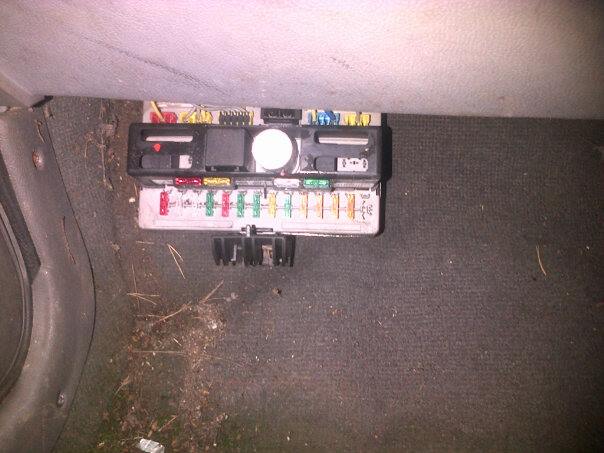 I then went through my stock of spare headlamps, and sods law then dictated that the only ones with a complete set of clips were for the side I already had - guess I'm buying new off ebay then!

I have a few spare headlights, so don't worry there. I can include those chevrons too!

So the 2nd of January (happy new year!) saw me heading off to North North Wales in the company of Andy Weston to pick up the pick up - this is it loaded (thanks to Andy for the pic!): 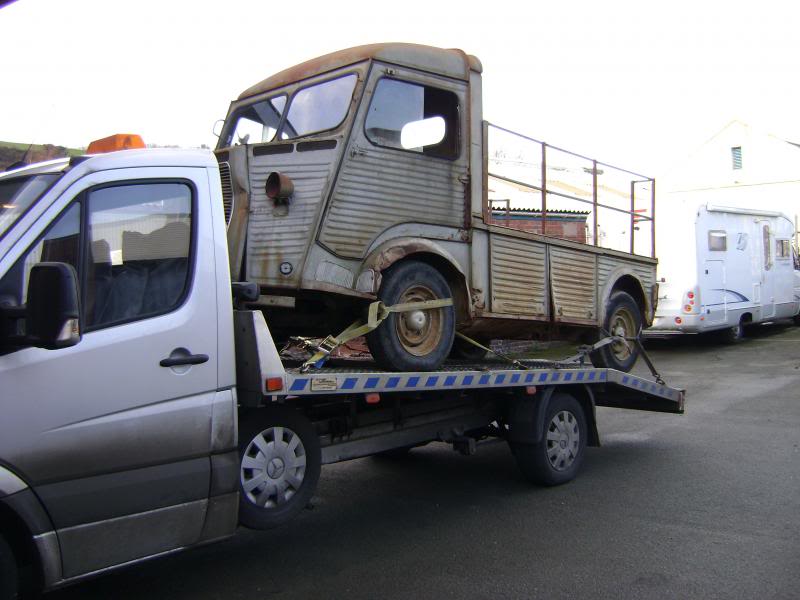 Even with me asking permission to block next door in over night, I bet the neighbours loved seeing this parked outside: 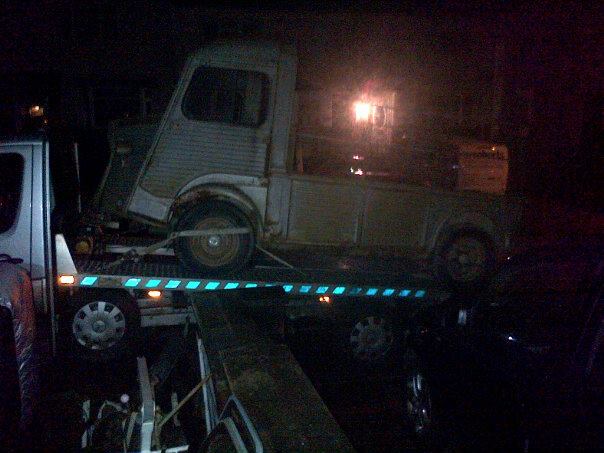 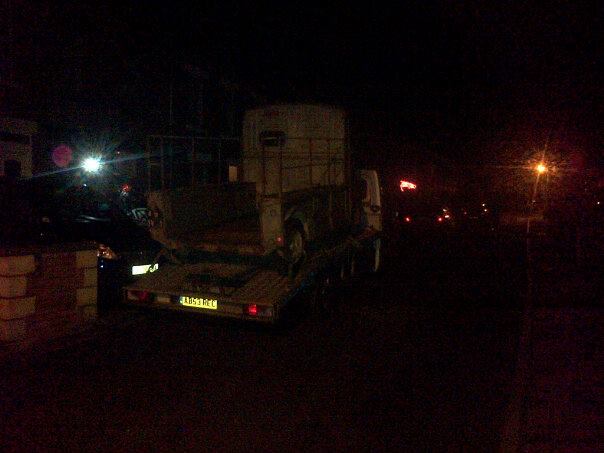 Initial inspection is mixed. Apart from some dents, the cab is very solid, as is the Left hand side in general. The right hand side has some rust on the lower edges, but nothing I haven't fixed on these in the past. The rear load floor is very poor, with the whole lot probably needing ripping out, and a new rear cross member and repairs to the chassis rails needed before the new floor is installed. You can get new cross members, and corrugated repair sections for the (double layered) floor, but they are expensive, so I'll be making my own. Mechanically the engine is seized, but the suspension seems good, and it looks like it's had a rewire at sometime (although I'll double check it all anyway.

It's also slightly later being a '62 instead of a '59. Although this means I have to MOT it, it also has the benefit of better brakes (wider drums) and 300kg more payload, which helps with my plans to enable it to carry a car on the back. To that end, I'm currently thinking of rebuilding it more or less standard, then adding a removable tilt and slide deck - not exactly period, but should enable it to take a BX or GS with flat suspension.
Mike Sims
BX 19RD Estate Mk1 - Timex!
BX 4X4 Estate - Oh god, I've done it again!
BX 17RD MK1 - it called to me!
BX14 TGE, - SOLD
XM Turbo SD,GS Club Estate,Visa 17D Leader,HY Pickup,Dyane Nomad,Dyane 6,2CV AZL,Falcon S,Trabant P50,3x Land Rovers (88" series 1,109" series 2a FFR,series 2a Marshall ambulance),DKW F7, Lambretta LD150 x 1.5,Mobylette SP93,Ural Cossack,Ural M63,CZ 250 Sport,Honda Varadero 125,lots of bicycles & tricycles including (but not only) Sunbeams,Higgins & Bates!
Top

The rest of the last week has seen me working on Simon Sobey's 2CV again:

I cut out the bonnet hinge area, revealing it rusting from the inside out: 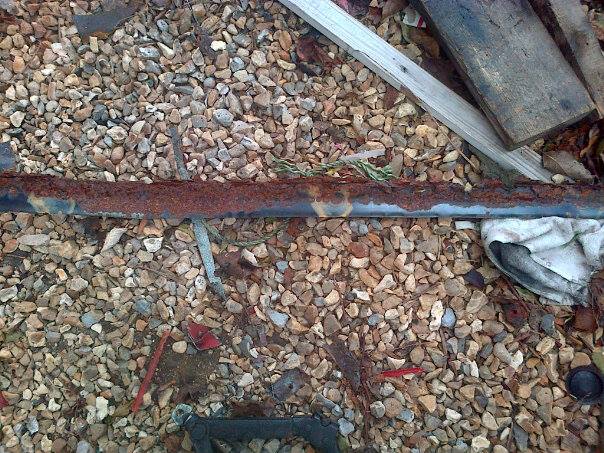 The inner structure didn't look too clever either, but was better than I thought it would be: 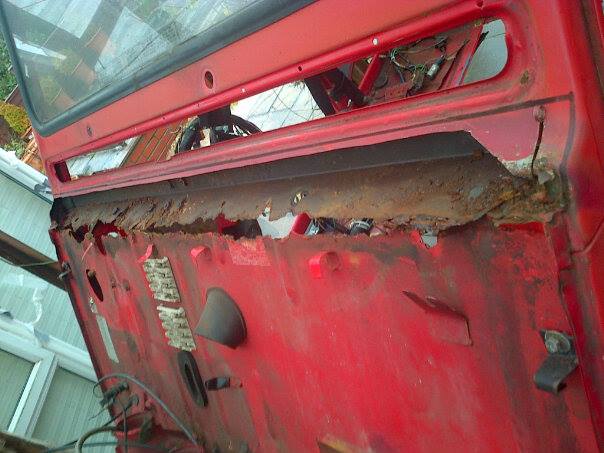 Rather than fit the new section we had for the inside, I opted to repair what was there: 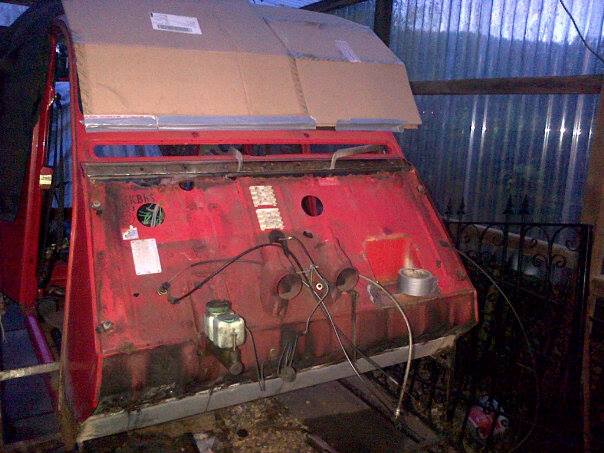 After painting all the surfaces that would be hidden, the bonnet hinge repair section was then fitted: 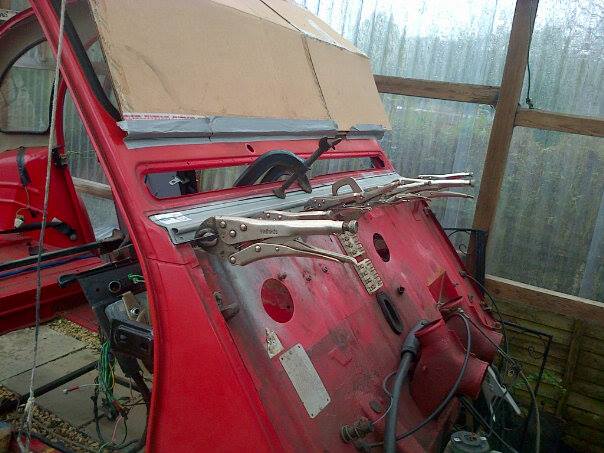 I was very careful stitch welding it in an effort to minimise any distortion: 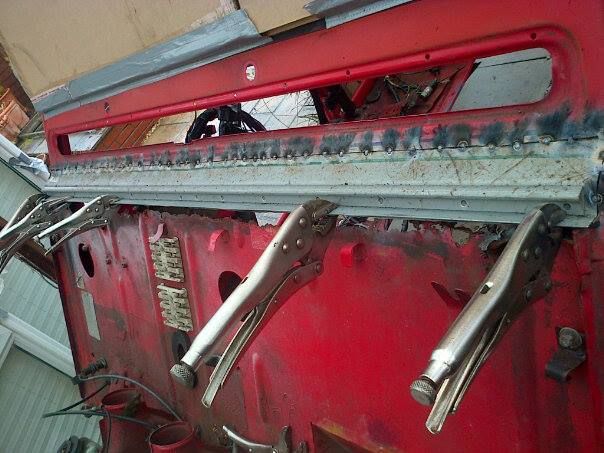 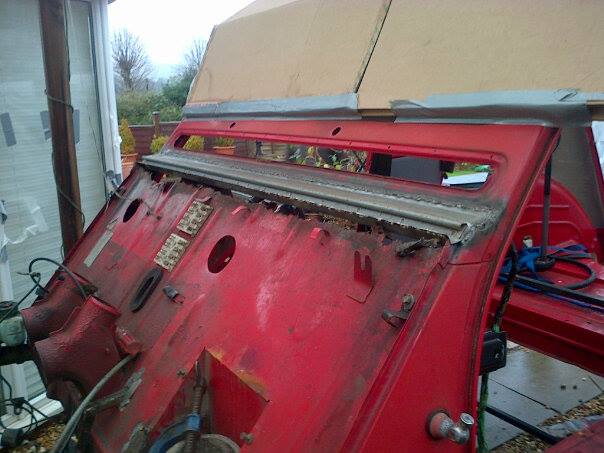 I then started on the top of the bulkhead, making it up in sections as I replicated swages etc. so that if I got it wrong I didn't crap too big a repair section: 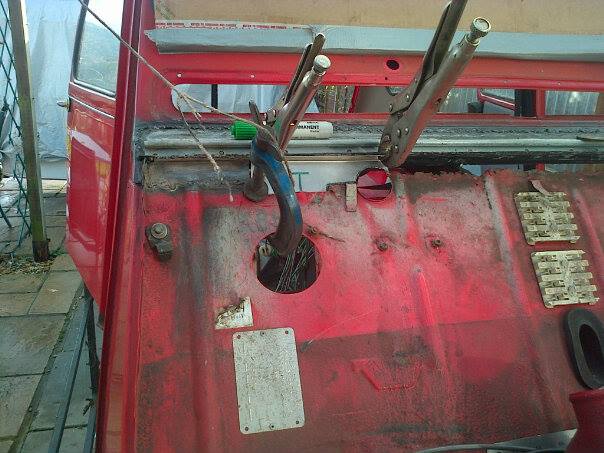 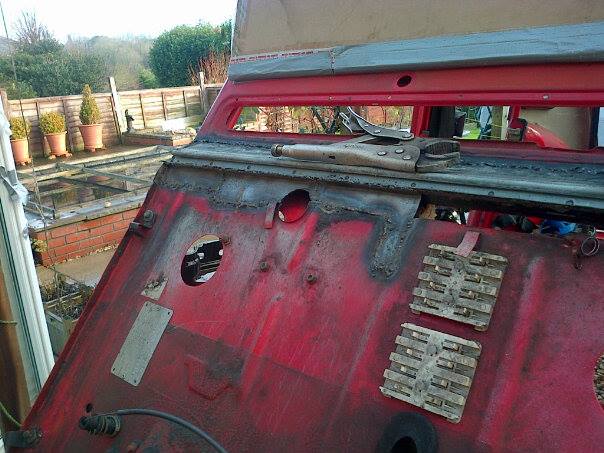 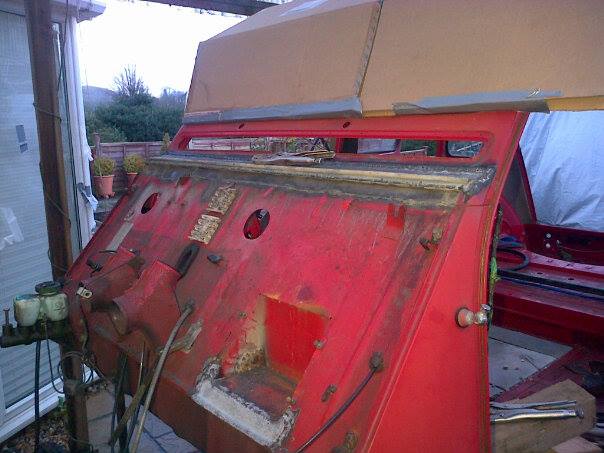 I then took a day out to investigate an LHM leak on Timex - turned out to be a front to rear pipe rubbing on the rear arm - Bum! John Sobey has given me some money towards this repair so it's booked into the Westons as the drive is full of Fred now and I didn't fancy doing it on the road side. 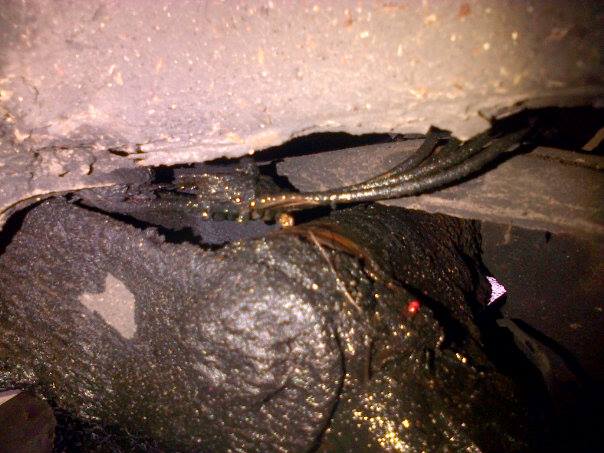