I'd have some serious words with the dodgy bloke you bought it off!

By my standards this one isn't too bad! So far, compared to the GS I've found BX bodywork easy to work on. On the other hand, I'd much rather work on the GS mechanics - once you get your head round the sequence of reaching things, it's all straight forward, while some of the BX stuff seems deliberately difficult to get at
Mike Sims
BX 19RD Estate Mk1 - Timex!
BX 4X4 Estate - Oh god, I've done it again!
BX 17RD MK1 - it called to me!
BX14 TGE, - SOLD
XM Turbo SD,GS Club Estate,Visa 17D Leader,HY Pickup,Dyane Nomad,Dyane 6,2CV AZL,Falcon S,Trabant P50,3x Land Rovers (88" series 1,109" series 2a FFR,series 2a Marshall ambulance),DKW F7, Lambretta LD150 x 1.5,Mobylette SP93,Ural Cossack,Ural M63,CZ 250 Sport,Honda Varadero 125,lots of bicycles & tricycles including (but not only) Sunbeams,Higgins & Bates!
Top

That's interesting Mike. I'd kind of assumed that BXs were easier to work on than GSs. I guess it's what you know to some extent (like 2CVs - terrifying for the novice who's only worked on Fords or Vauxhalls). There are definitely some jobs on the BX that aren't fun though.
www.classichub.wordpress.com
Top

You are doing an amazing job with Timex Mike, I'm so impressed with your continued enthusiasm despite unearthing new challenges around every corner. I wish I could muster the same dedication to renovating my sash windows. It's great to see the before, during and after keep the pictures coming.

Spannering and painting day today! Started off by repairing the return pipes from the back of the car: 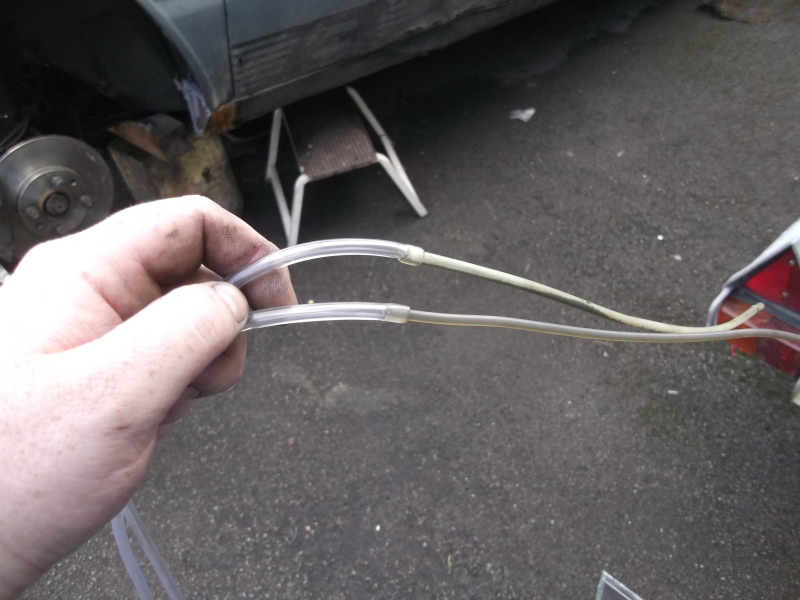 Basically replaced the damaged sections with plastic pipe from B&Q - not sure how long it'll last, so I'll monitor things.

Then stripped out and replaced the fuel supply and return hoses that run up the back of the engine. Both were cracking where they fit the steel pipes running under the car, plus the return had almost chafed through in one spot. Removal wasn't helped by some zip ties in inaccessible places. Supply has this thing in it: 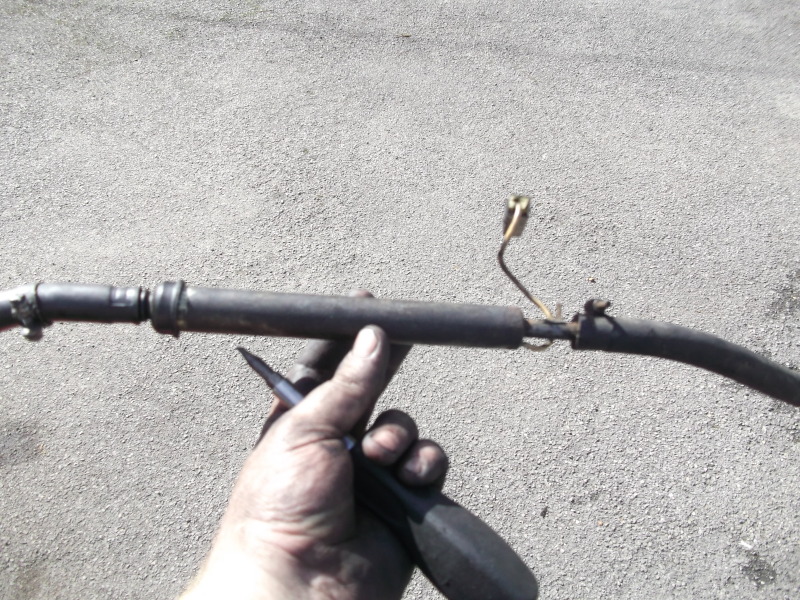 I'm guessing it's a fuel heater, but whatever it is it wasn't wired in - one of the connectors had come off.

I also took the opportunity to plumb in an in line primer bulb: 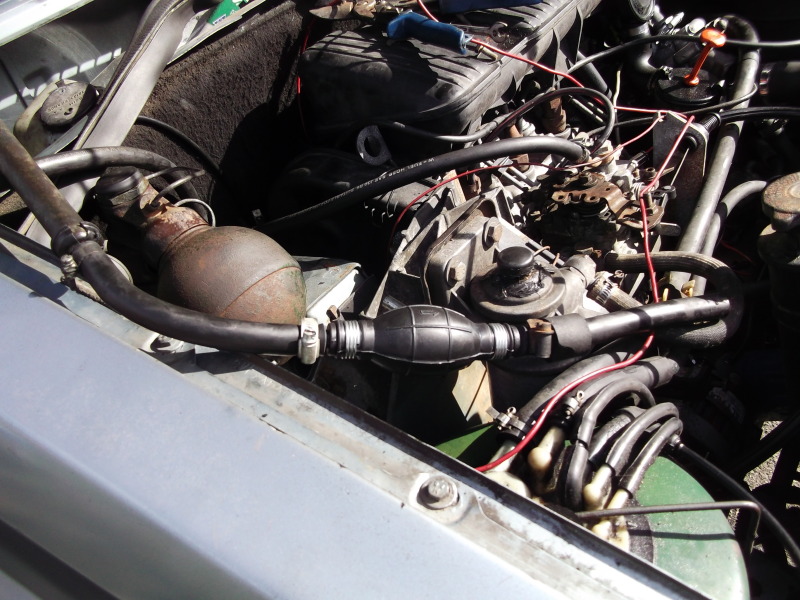 This will avoid the risk of damaging the diaphragm in the top of the filter housing by using the primer in there.

I then painted the underside of the welding repairs in Smootherite, simply because I was given the paint 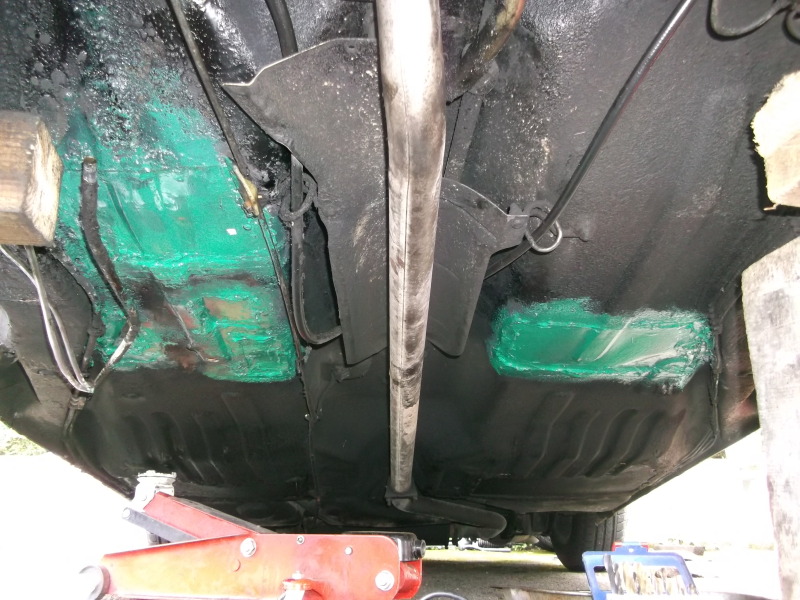 This was followed by underseal: 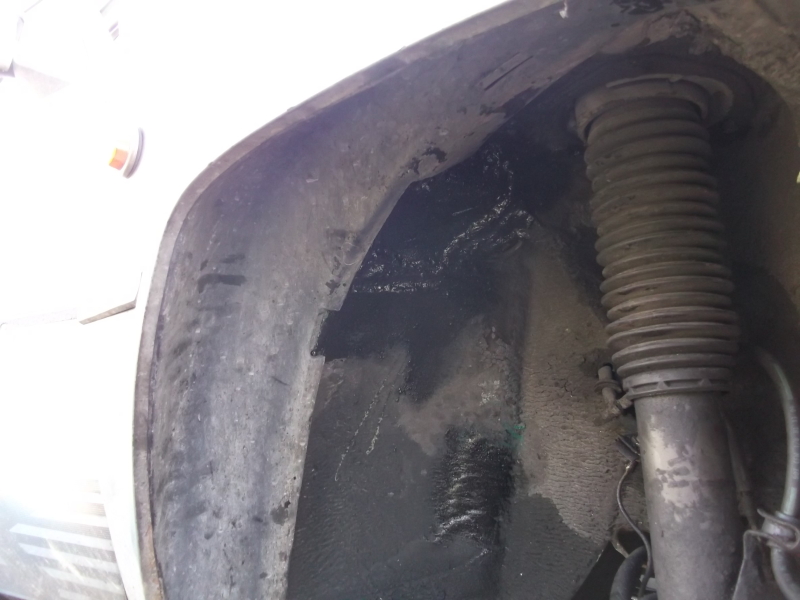 Once this was done, the fuel and hydraulic return lines were mounted up underneath, the wheelarch liners refitted and the guide for the height adjustment bar fitted to the repaired floor.

I primed up the fuel system, but noticed something odd - is there supposed to be diesel dripping from the back of the pump when you prime it? 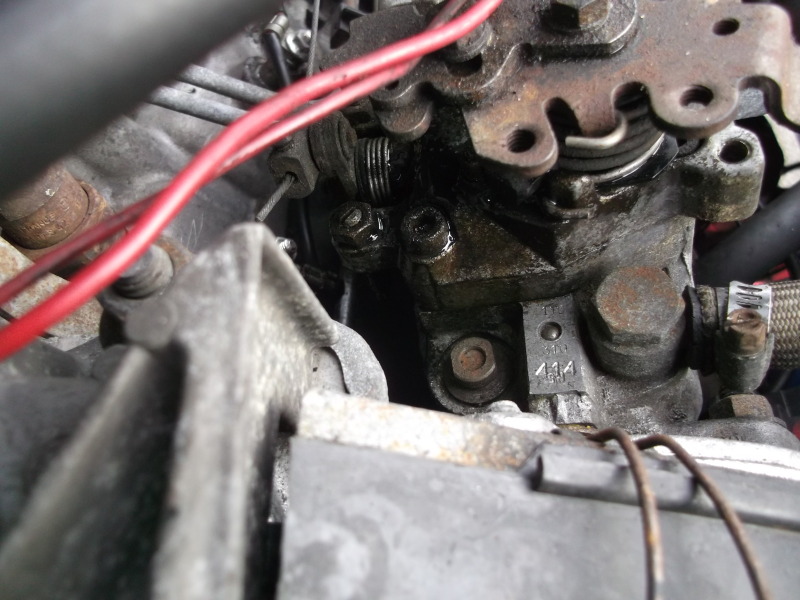 Anyway the engine fired straight up, and after playing with the steering, the pressure relief screw and the height lever it eventually lifted - with no immediate leaks 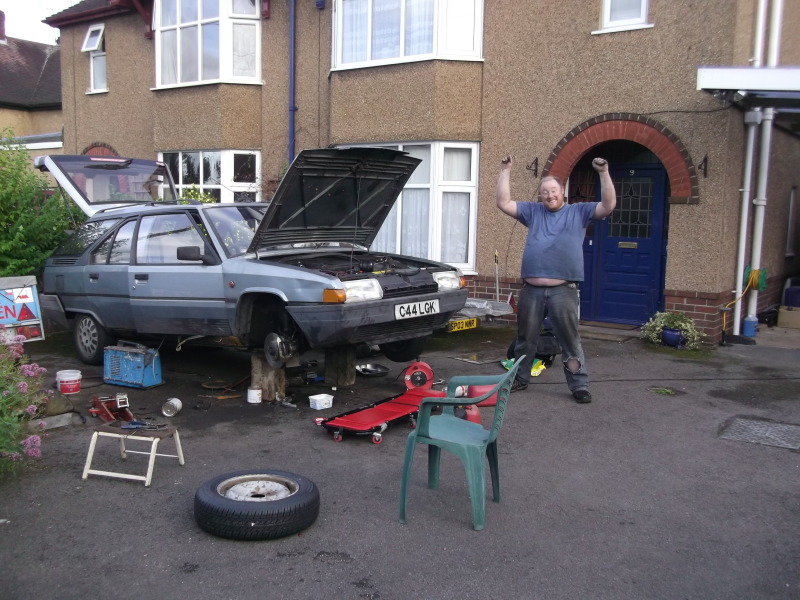 I ran her for several minutes, bleeding the front brakes and double checking joints. There's a very slight leak from the return collar we had to repair on the PAS ram, but other than that it seems fine.

Front wheels back on (with trims), and I let her back down to the ground, to have about a litre of water pour out of the drivers sill where I'd cleared the drain: 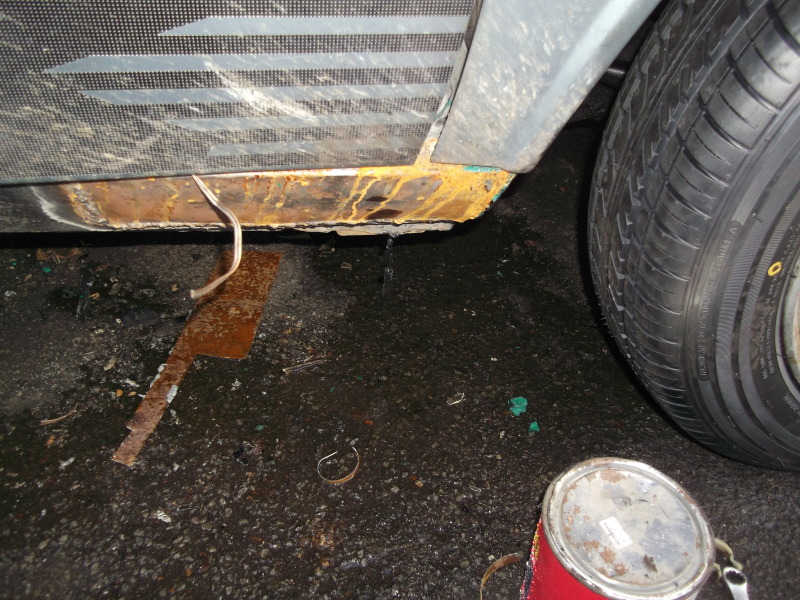 Next I jacked up the rear end in preparation for replacing the rear cylinder cover. Of course I had to go poking round

This will all need welding then: 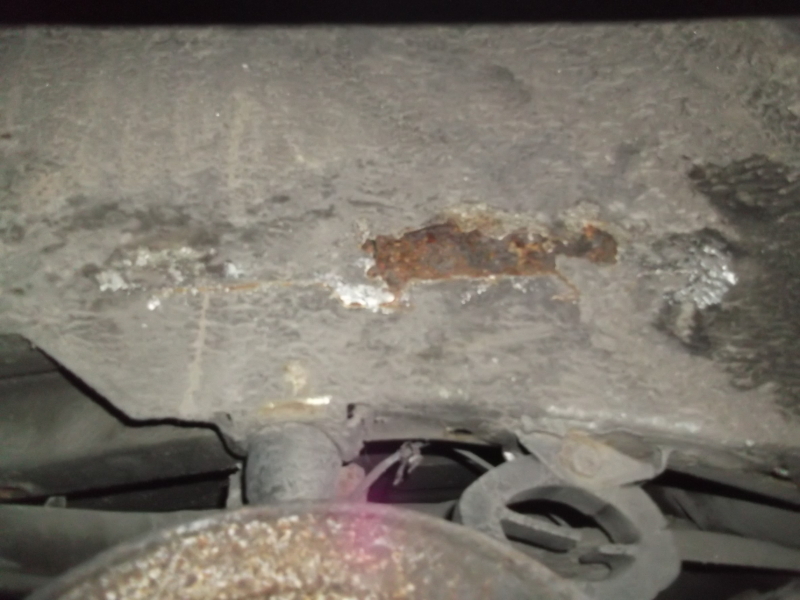 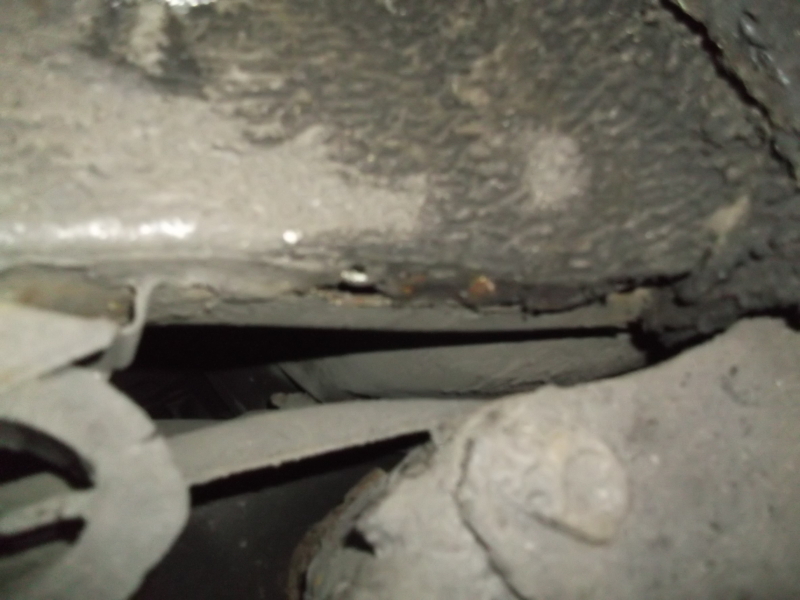 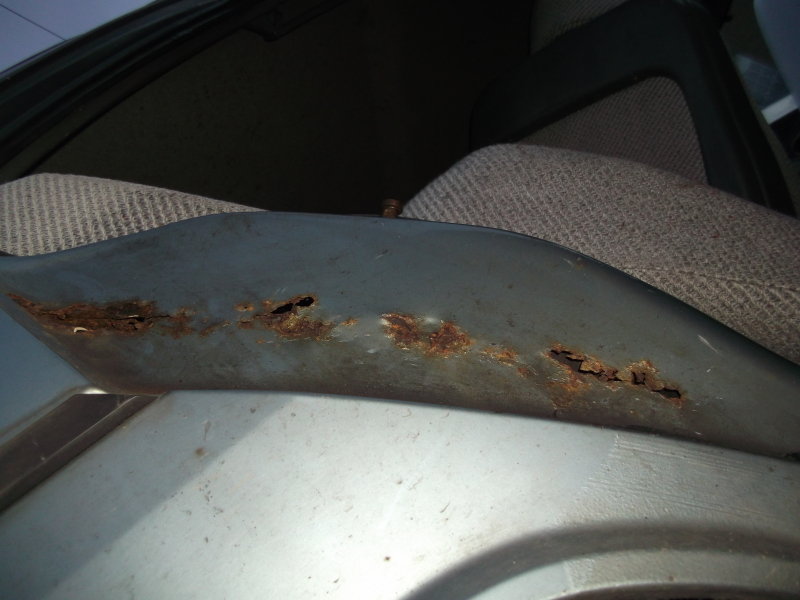 Finally - it looks like there was some kind of stoneguard here? 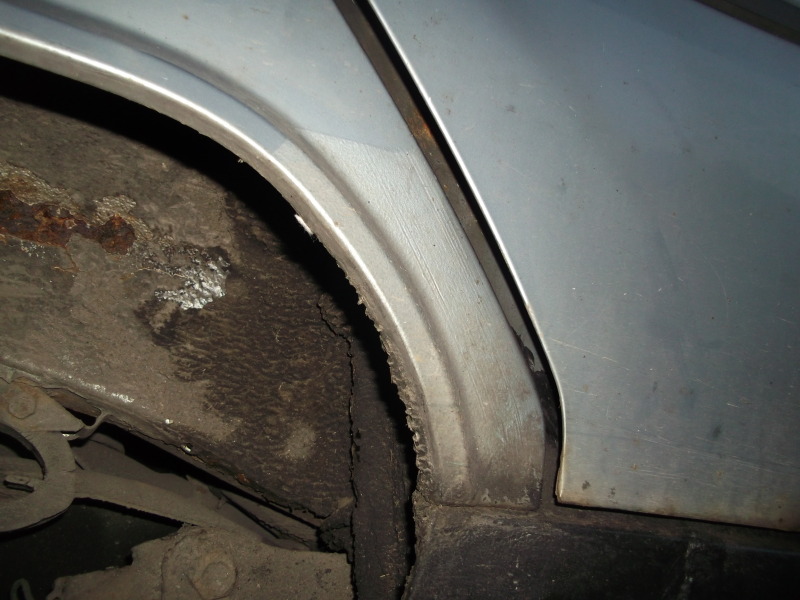 You're a legend Mike, this is a great blog, shame you keep finding stuff, but it's great that you keep tackling it head on & sorting it out. The car will be a credit to you & it's great to see it still on the road

Started on the rear cylinder cover this morning. Needed to spray both the front clip, the end of the rod and the cover clamp with WD40, but it eventually started coming apart: 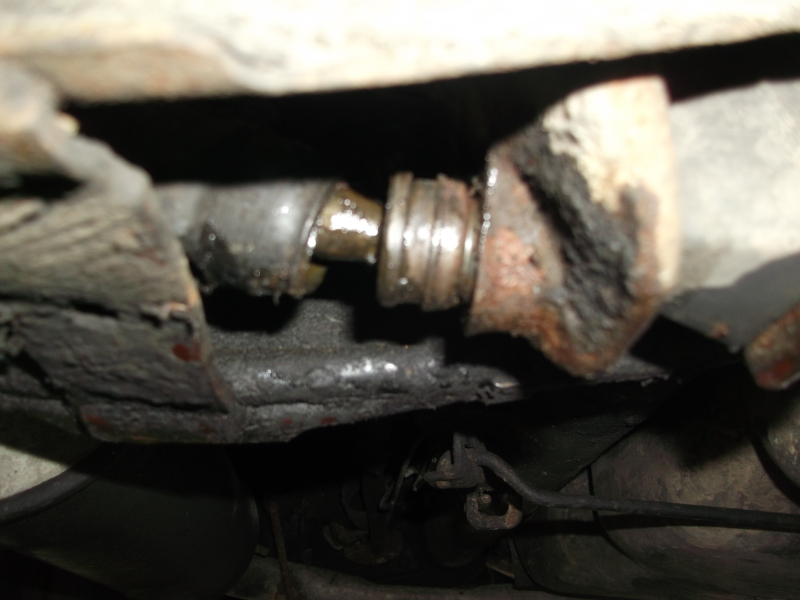 Luckily everything under the cover seems to be in really good condition: 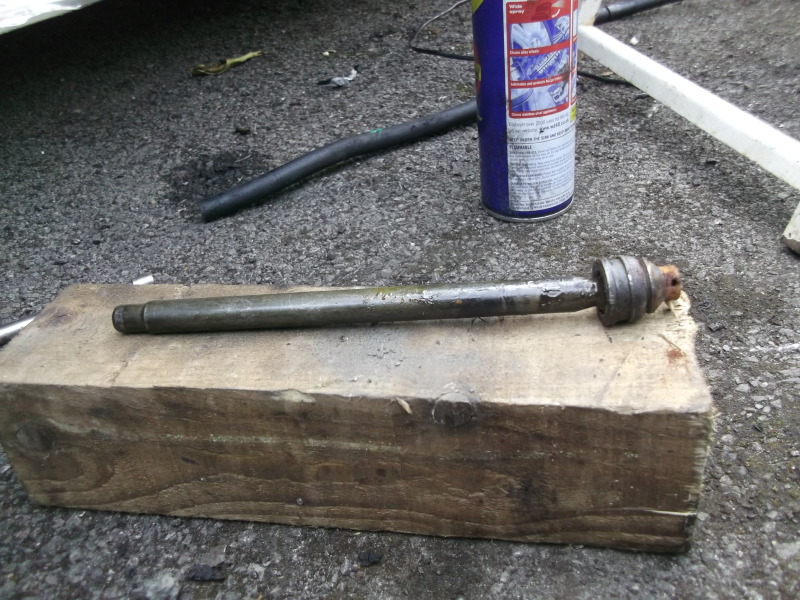 The new cover is slightly different to the old one, with a beefed up outlet where the old one split: 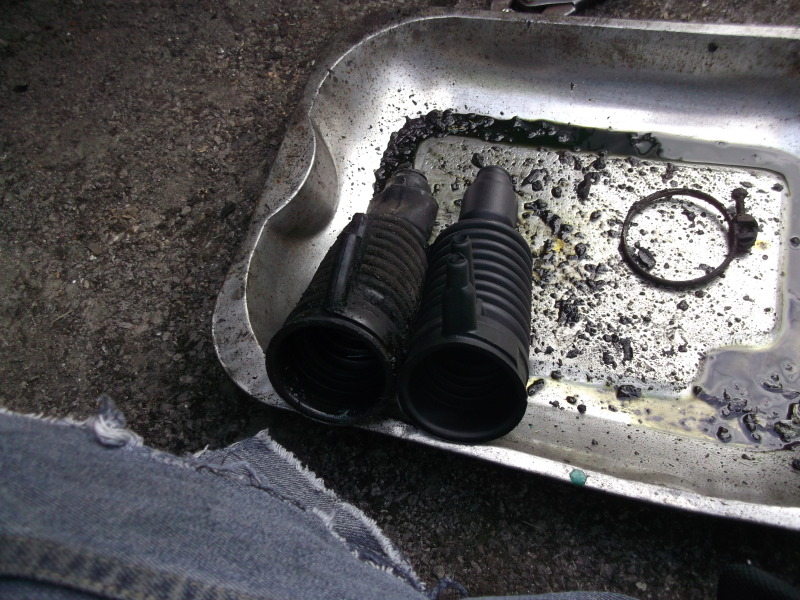 After a bit of trial and error, got it all together. Best way I found was to fit the cover to the rod, then assemble the lot onto the cylinder (making sure you remember the clamp

). Jacking up the arm helped compress everything in to enable the refitting of the clip: 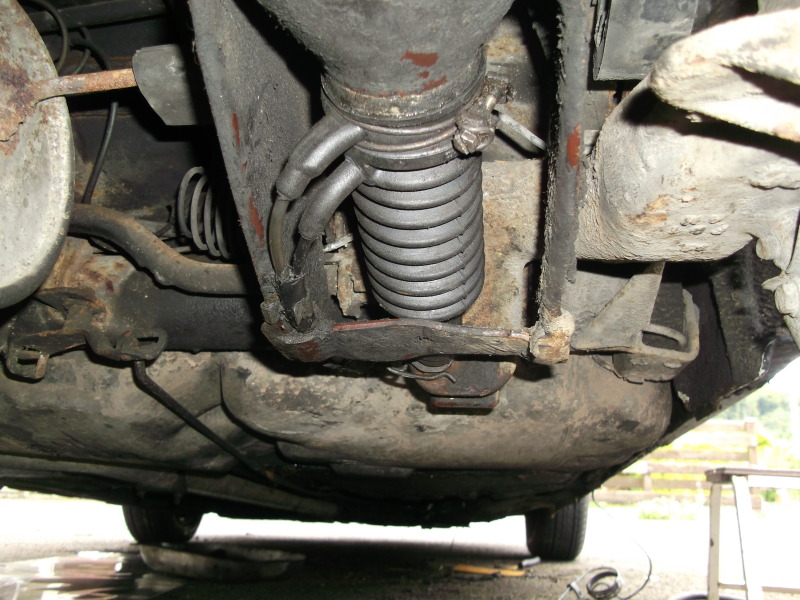 Then started on the C post, cutting out the rot in the outer face: 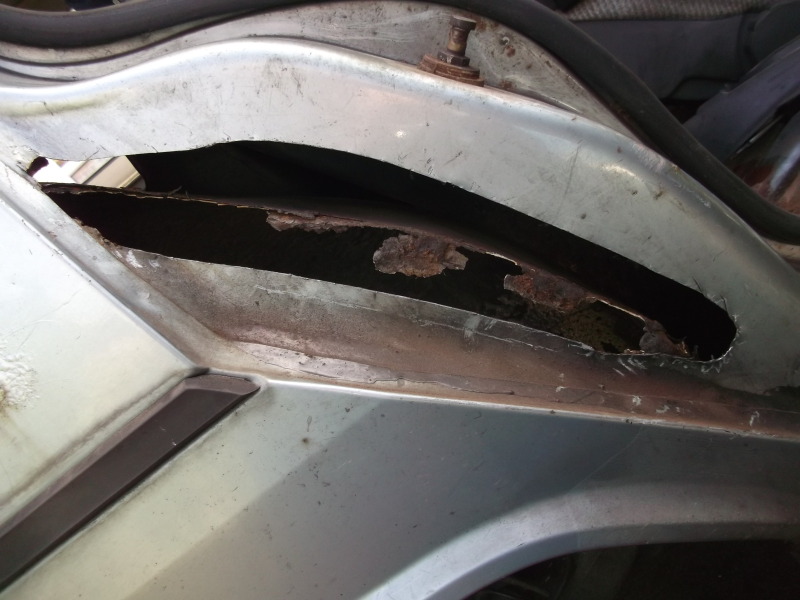 This piece of foam was in the bottom of the C post, where it had soaked up water then rotted the C post from the inside out: 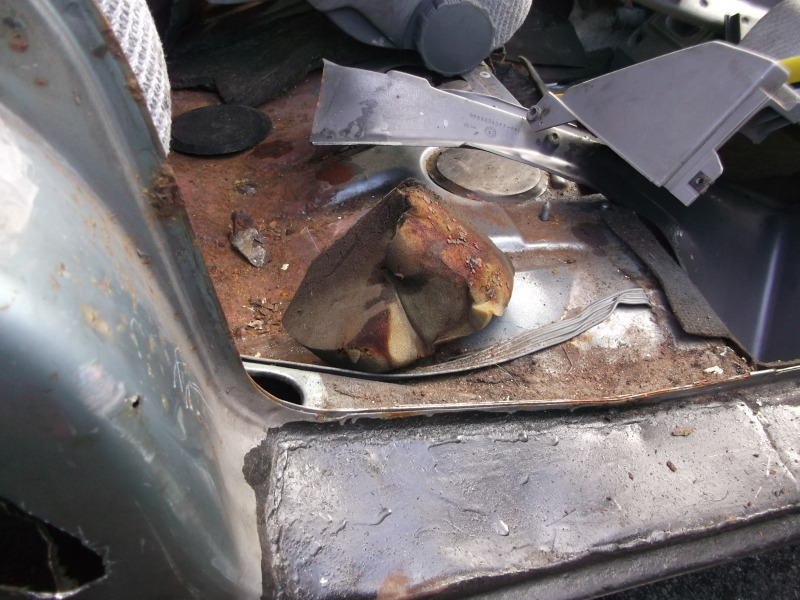 I trimmed back then repaired the arch panel, before welding up the C post and tying both panels together: 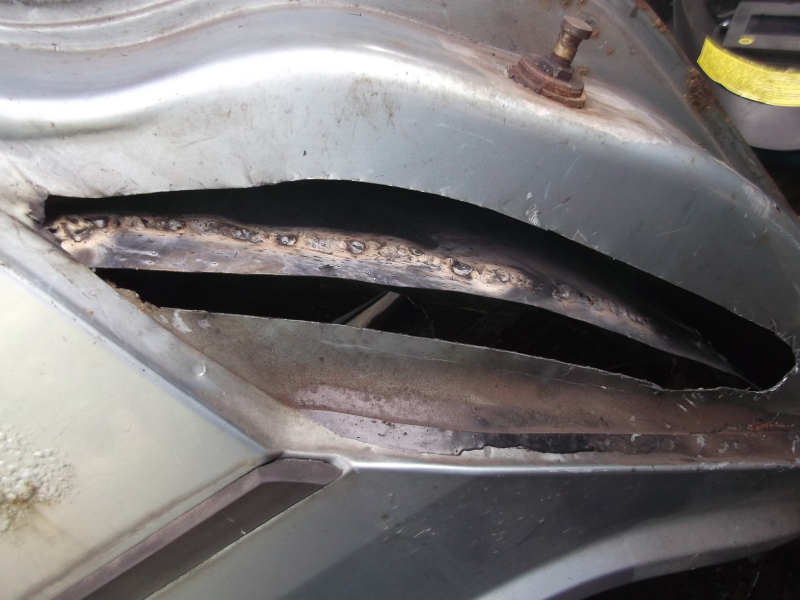 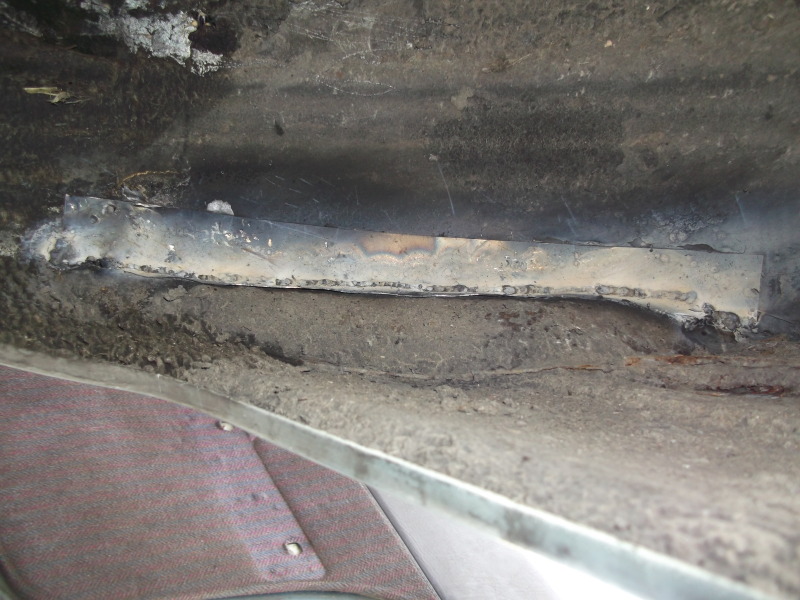 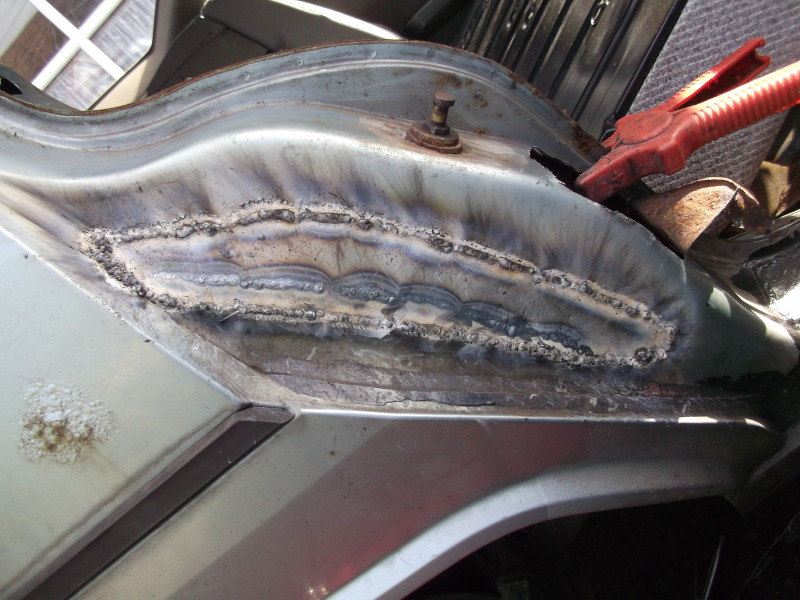 Next came the forward face, where the foam had rotted it: 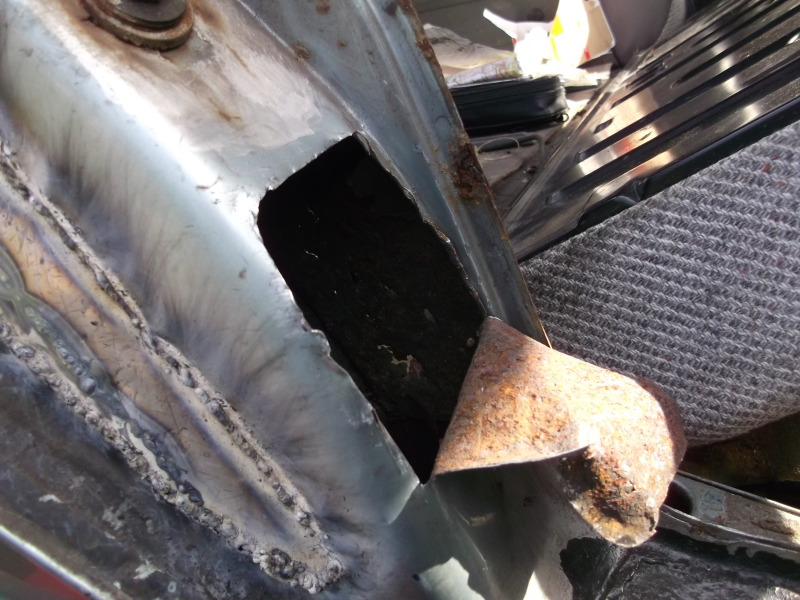 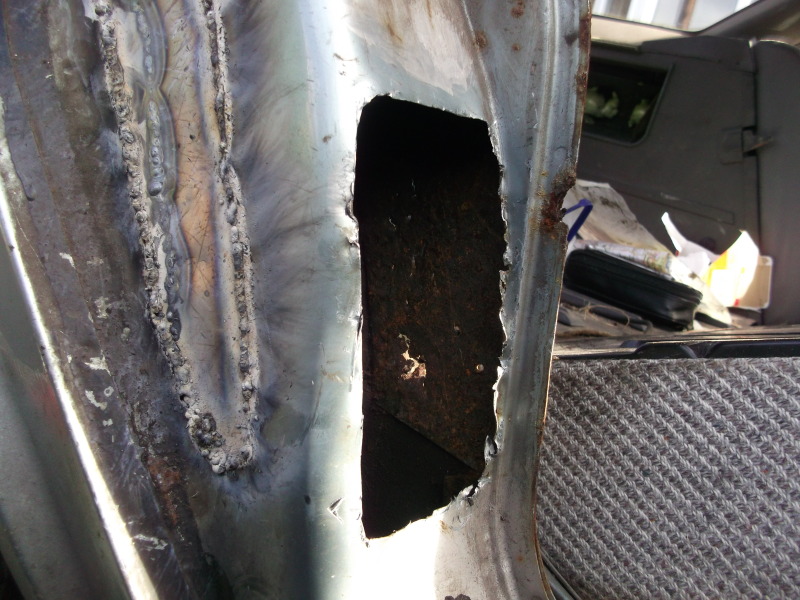 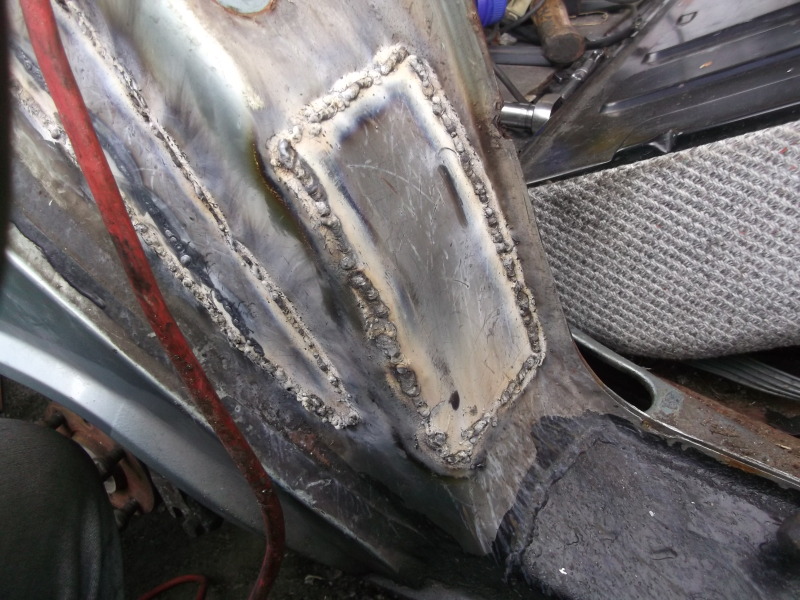 There were also stress cracks around the door catch pin, which I welded up: 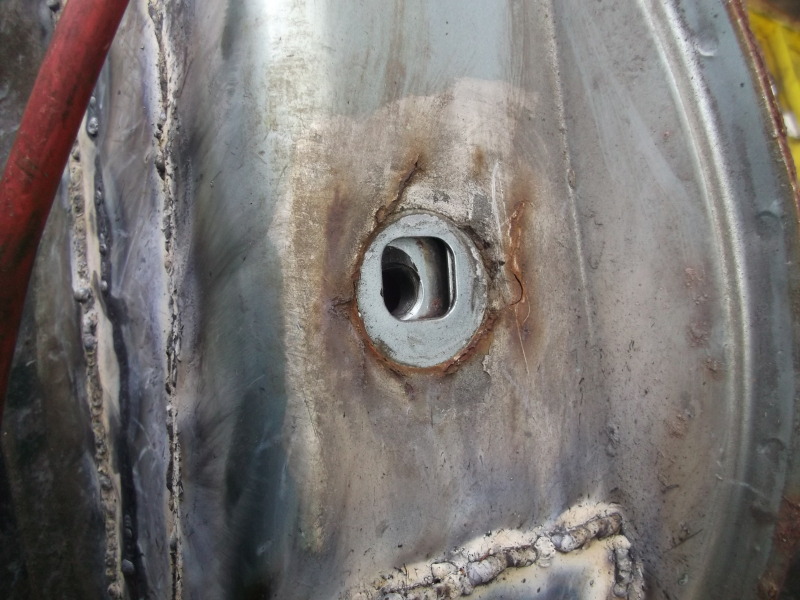 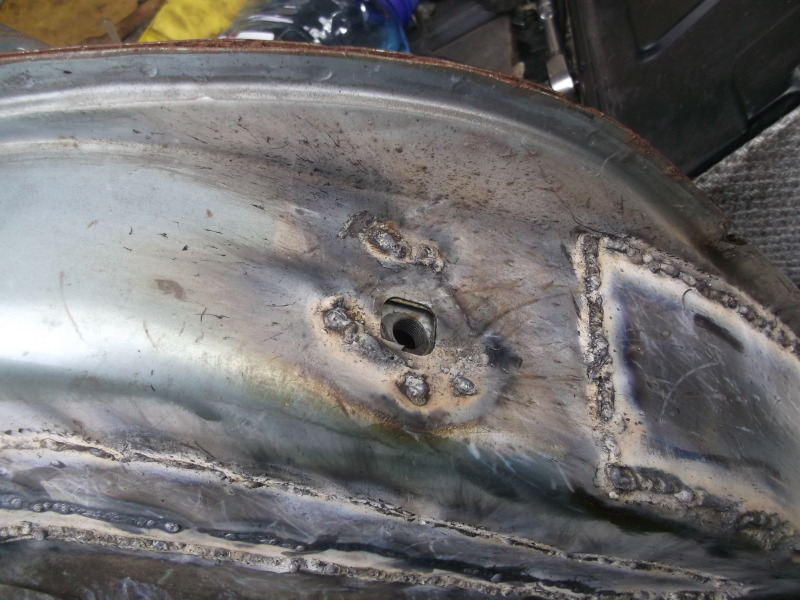 Finally, I cut the rust out of the inner section of the C post, cut the repair section then painted all the surfaces about to be closed in before rain stopped play: 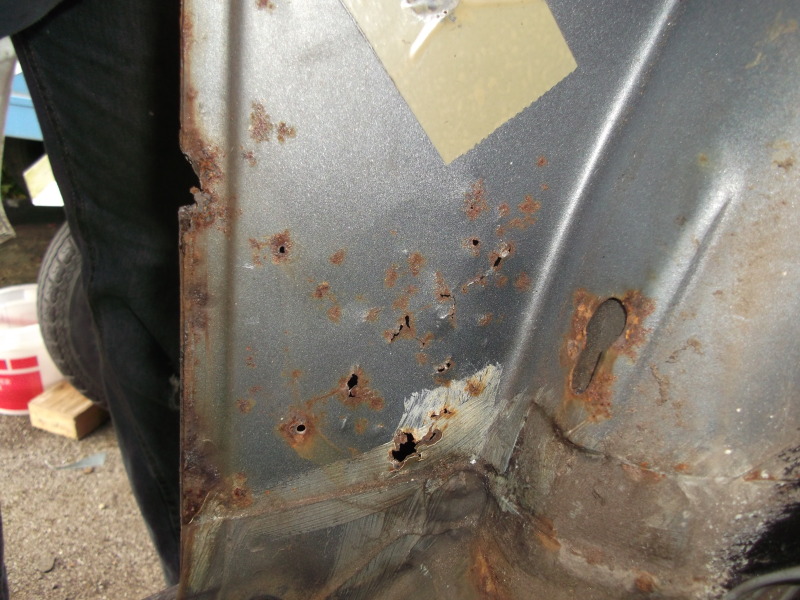 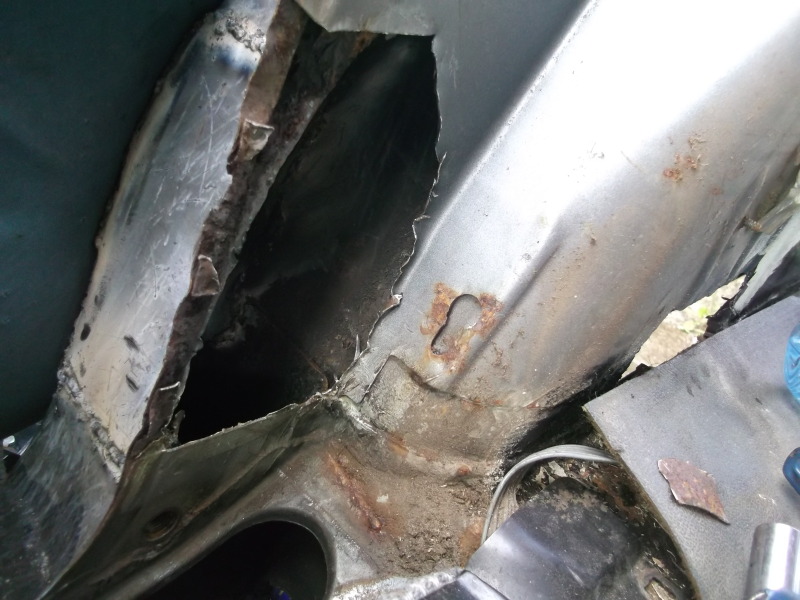 And if you think this is major work, wait until you see tomorrows pics (weather permitting

I am amazed at the amount of work you have put in.

When did that car last pass an MOT?

Great job for bringing it back from the dead.

It passed an MOT almost exactly a year ago. The more amazing stuff is done to this car, the happier I become. Definitely sold it to the right guy!
www.classichub.wordpress.com
Top

All that rust can't have appeared in less than 12 months, was none of the rot structural then?

A lot of the floor rot has been as a result of various leaks, and I think there were several areas that were thin last year that have now holed.

Well, it's MOT time tomorrow, although I'm not overly confident!

I've spent the last hour failing to upload pics to Photobucket, so no pics tonight

, although nothing too serious. In order:

Headlamp adjustment
2 x educating the tester on the peculiarities of Mk1 light switches (he couldn't find the dip switch)
3 x rusty doors that need a bit of gaffer tape
Diesel leak - leakback pipe on the injector leaking where a screw blanks it off.
1 front balljoint
Ends of the rear crossmember, which are counted as structural as they are within the prescribed area around the tow hitch mounts.

Also 5 advisories, including front brake pad springs (managed to assemble a couple back to front), the other front ball joint, a slightly damaged seat belt and an oil leak.