Tell us about life with your BX, or indeed life in general!
Messages: 219

As more and more issues surface, I'm more and more inclined to take this car off the road for a bit. The Bluebird and TXD require tax at the end of the month, and I can't afford both. I've got the Bluey up for sale, but actually, it probably makes more sense to keep it as it actually works! Strut return pipes should arrive today, so that means I can get the TXD moving again at least, but it's going to need brake attention before it can really be used.

Of course, the Green Tiger has a recon caliper on it, so my plan was to pinch that today and put whatever I've got lying around on the Tiger so it can still be driven. However, it's pouring with rain and I can't get the Tiger into the garage as there's a broken TXD in there. Complications! The caliper on the TXD does seem to work, but I'm having real trouble with the slider boots. I still can't get them off.
www.classichub.wordpress.com
Top

I think they're glued in place. Copper grease will suffice for a reasonable amount of time, as even when the grease dries out the copper particles help prevent sticking.

And what's wrong with working in the rain - your skin is waterproof isn't it? Wimp!

Yes but my beard will end up saturated. Not good.
www.classichub.wordpress.com
Top

Fair point! Not a bad day up here ATM, although we haven't had a dry day since the 7th.

You'd best stop wasting time on the Internet then!

I've heard this before but don't think they are. They are just pushed into a recess and then held in place by the piston, however I think the heat over the years helps them to become one with the caliper, piece and love and all that!

That sounds likely Kevan. Anyway, with the arrival of actual nice weather, I got the job done. Nice shiny caliper now in place on the TXD and with copious amounts of copper grease, the one on the Green Tiger is actually working for the time being...

The only issue was the bleed nipple on the older caliper, but having checked out Mulley's Magnificent Nipple Technique, it wasn't a problem for long. 8mm was rounding instantly so I hammered on a 7mm spanner and sprayed copious amounts of penetrating oil around the nipple. Then I pulled on the spanner while smacking the spanner head with a hammer (head not the spanner arm as that tends to just break tools). Oooh, a hint of movement! I tried again, then tightened it again, then loosened, tightened, loosened, more oil, tightened and eventually got a full turn on it. Lovely! With the 7mm spanner still on the nipple, I refitted the caliper, bled her up and tapped the hammer off. Should be possible to replace that nipple now if required at a later date.

This all means that the Green Tiger has now officially become a parts donor. Bit sad, but here's to the TXD!

Now awaiting a delivery of other bits (strut returns and handbrake cable being most urgent) so I can get behind the wheel again.
www.classichub.wordpress.com
Top

Farewell Green Tiger. The legend will live on... 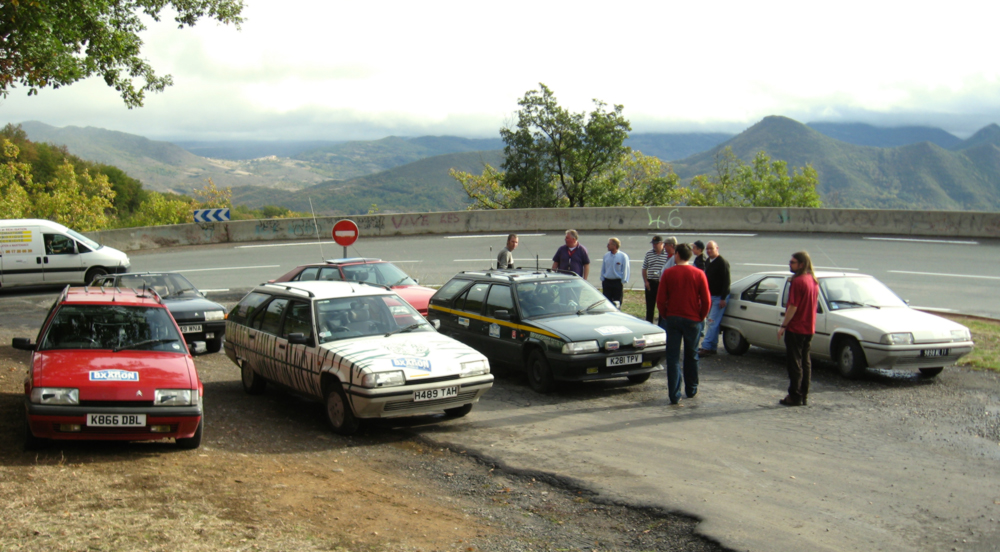 Good times! Given that most 'banger rally' cars get dumped as soon as the folks get home, the ol' Green Tiger hasn't done badly. She still drives!
www.classichub.wordpress.com
Top

Aww can someone not save her?
Lots of Motors, mostly semi broken....
Top

I did feel quite bad driving her up the driveway today just so I could remove bits. She doesn't feel horribly rusty when you're driving her! I did remind myself of the nasty rot lurking in the windscreen surround today though...
www.classichub.wordpress.com
Top

Quick question. What spheres should be fitted? The front spheres are about three years old apparently but the ride was quite firm, with a distinct bounce at the rear, so I suspect a sphere refresh is in order. Given the choice, I'd opt for comfort spheres but I was just curious as to what it would have had when new.
www.classichub.wordpress.com
Top

Aww can someone not save her?


I did feel quite bad driving her up the driveway today just so I could remove bits. She doesn't feel horribly rusty when you're driving her! I did remind myself of the nasty rot lurking in the windscreen surround today though...

Unfortunately, once cars start to go like this, it's an expensive business to sort out - you either have to give someone else lots of money to put it right, or invest lots of money in the kit needed to do it yourself. Between my welders, various hammers, shears and other hand tools, a sheet metal folder, a guillotene and a swager, I've probably spent around a grand on kit over the last 16 years or so, not to mention at least the same on consumables. I've only managed to do this by spreading the cost over several years (and projects). Unless you're really determined to save a particular car (or it's particularly rare), it's a sad fact that, for the moment at least, it's cheaper and easier to track down a replacement vehicle than it is to repair a rusty one.
Mike Sims
BX 19RD Estate Mk1 - Timex!
BX 4X4 Estate - Oh god, I've done it again!
BX 17RD MK1 - it called to me!
BX14 TGE, - SOLD
XM Turbo SD,GS Club Estate,Visa 17D Leader,HY Pickup,Dyane Nomad,Dyane 6,2CV AZL,Falcon S,Trabant P50,3x Land Rovers (88" series 1,109" series 2a FFR,series 2a Marshall ambulance),DKW F7, Lambretta LD150 x 1.5,Mobylette SP93,Ural Cossack,Ural M63,CZ 250 Sport,Honda Varadero 125,lots of bicycles & tricycles including (but not only) Sunbeams,Higgins & Bates!
Top

Indeed Mike. I kept falling in love with the romantic notion of saving her, but it's just not realistic. We've had a lot of fun together, been to many countries and done some amazing things but the TXD is a much better 'salvation' option.

The main thing is that rather than just be baled, she'll hopefully keep many other BXs going.
www.classichub.wordpress.com
Top
Messages: 219