Are blue clouds of smoke a bad thing when you start your XUDT in the morning (a glowplug or two aren't working)? Immediately followed by a consistant blue cloud, that was visible whilst driving 2 minutes or so down a rather steep hill, using the engine to brake in 3rd doing 30 ish? All was fine when I pulled away at the junction at the bottom of the hill.

It is using oil, and water. But I see drips when left overnight, could be oil, could be water and could be LHM too, all 3 are leaking somewhere

No evidence of creamy oil in/on the dipstick area, haven't looked elsewhere though.
I'm not a Saint, or a James, but a Tom Saint-James!

Blue smoke any any time is far from ideal. Are you giving it two bursts of glow plugs in the morning? Both mine are needing it when it's really cold.
www.classichub.wordpress.com
Top

Usually two bursts, that is waiting for the relay to click off, and if it is cold then a 3rd is required for it to not sound like it's a few cylinders short. Even if it does fire up on all 4 at first, there is always at least a little blue puff.

We were on holiday this week in Ilfracombe (a town perched on a hill), at a holiday park. There was a pirate treasure hunt around siad park one morning when we were going out, the first time I have been proud of a blue smoking car. Started it with only 1 burst of glow plugs (gosh, I hear you say) and gave it a cautious rev. Result? Group of pirate clad children were engulfed by my little blue smog

There was pointing, and scowling and coughing. Shit, I feel bad now. At the time though...

Anyway, I am being serious. This morning's amount of blue smoke did make me worry.
I'm not a Saint, or a James, but a Tom Saint-James!

Yes, blue smoke not ideal, but probably liveable with rather than something that needs sorting right away! Has it just started? I'd suspect valve guide/stem seals (although not all XUDs had seals).

Dollywobbler wrote:Are you giving it two bursts of glow plugs in the morning? Both mine are needing it when it's really cold.

If you need more than one burst of glowplugs, that suggests something isn't quite right. Again, it may be something you're prepared to live with on an older car - spend the money on the GT!

(Just to show off, here's mine starting in the cold after a few weeks

I can leave my DTR for a month and it only needs one burst of the glowplugs, sounds like yours need replacing Tom.
Lots of Motors, mostly semi broken....
Top

Yes but do you leave your DTR outside before trying to start it Tim? It's been so cold here that even our minibuses have been struggling to start with just one burst of glow plug. The TXD is a lot better since I changed the plugs, but a second burst does have it starting more cleanly when it's sub-zero.
www.classichub.wordpress.com
Top

Outside? No way she may catch a cold, it was about 3 degrees in the lock up last week though and she still fired straight up.
Lots of Motors, mostly semi broken....
Top

We've had -6 and -7 degrees temps the last couple of nights. Since fitting the Bosch Duraterm glow plugs the XM fires up on the first crank. Since the new starter motor was fitted that has made a noticeable improvement to cold starting as well.
Mark Smith

Thanks for the input chaps, been meaning to do something about the plugs, but i'd rather spend on the GT atm. RE blue smoke, it's always had a puff at first start but this has always disappeared almost straight away, the issue the other day (smoking all down the hill) I wonder if it's anything to do with such a steep dowhill road right after starting up?
I'm not a Saint, or a James, but a Tom Saint-James!

mat_fenwick wrote:
(Just to show off, here's mine starting in the cold after a few weeks

Don't make me get my long-time no-start video out!

I think the glow plugs could be a ruddy fish - Timex starts on the 1st hit of the plugs (on neat diesel at least!), but is lumpy for the first few seconds and smokes a lot, but it's grey/white smoke from badly/unburned fuel, not the blue smoke of oil.

I've run plenty of motors with worn engines over the years, and I'll 2nd Mat's suggestion of valve guides/seals. What'll be happening is when stopped, any oil around the valves will be running down the guides to find it's way into the combustion chamber to be burnt on start up. It'll continue to let small amounts of oil by when running, but on overrun (such as when engine braking or when the engine slows down during a gear change) it'll be sucking much more oil though any weak points like this and burning it.

Cheers Mike, it takes a couple of months to go from Max-> Min so it's not using huge amounts quickly. I'll keep an eye out though.
I'm not a Saint, or a James, but a Tom Saint-James!

I haven't done anything to this poor car for some time now. The oil and water leak has gotten quite irritating, so I've booked today off of work to have a go at sorting things out - otherwise i'll never get round to it. On inspection this morning, the sump gasket is the main culprit, and I couldn't decide if the gearbox is weeping too, although this could just be sump gasket oil running down, difficult to tell.

Took the tow bar off this morning too, whilst having a good butchers underneath I made a list of stuff to deal with.

Other - New Drivers front caliper (there is a spring holding the handbrake part back, it squeals and there is a score mark in the disc)
Front discs+pads
Service
Gearbox oil change
Front tyres (spare is low, as is other side)
Paint new door, could have bumpers done at the same time.
New backbox.

Today, i'm planning to do the sump gasket, gearbox oil and service, see if I can see the water leak and try and adjust the turbo wastegate. There isn't much space behind here, so we'll see! Probably won't make too much difference anyway, as fueling affects the boost more.
I'm not a Saint, or a James, but a Tom Saint-James!

An afternoon of tinkering later, and all i've done is top the gearbox oil up! It took me a while to find the filling plug, in the end I used the breather plug as only had a petrol haynes and the filling plugs are at different locations on the petrols and diesels (or I may have been short sighted and just not find it), I had to take the battery out to do so, and it was still tricky, and I glugged oil all over the gearbox as I had no funnel! Good job the oil bottle had a longish skinny neck. The gear change is much smoother now, and I haven't heard any whining yet.

I did find the water leak too, it's the hose that goes from under the expansion bottle to the top of the stat housing, looks like the jubilee clip ha had it's screw and housing (that tightens/loosens it) snapped off, so all that's left is the ribbed band and strap that the screw would have sat on.

There were some interesting things I saw under the car. This is the rear engine mount, with a chunck taken off! 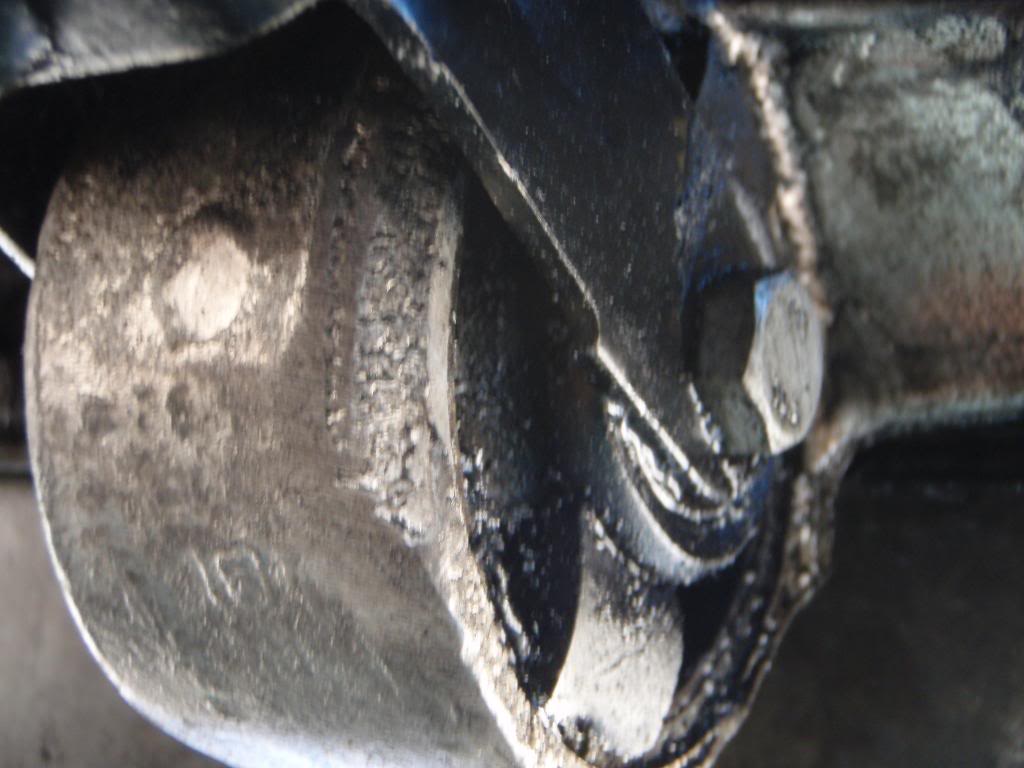 Looking up behind the engine, can't quite see the power steering rack, but this is where LHM is dripping, can't see from where but it ends up on the coiled pipes and the pipe with the union in this picture. 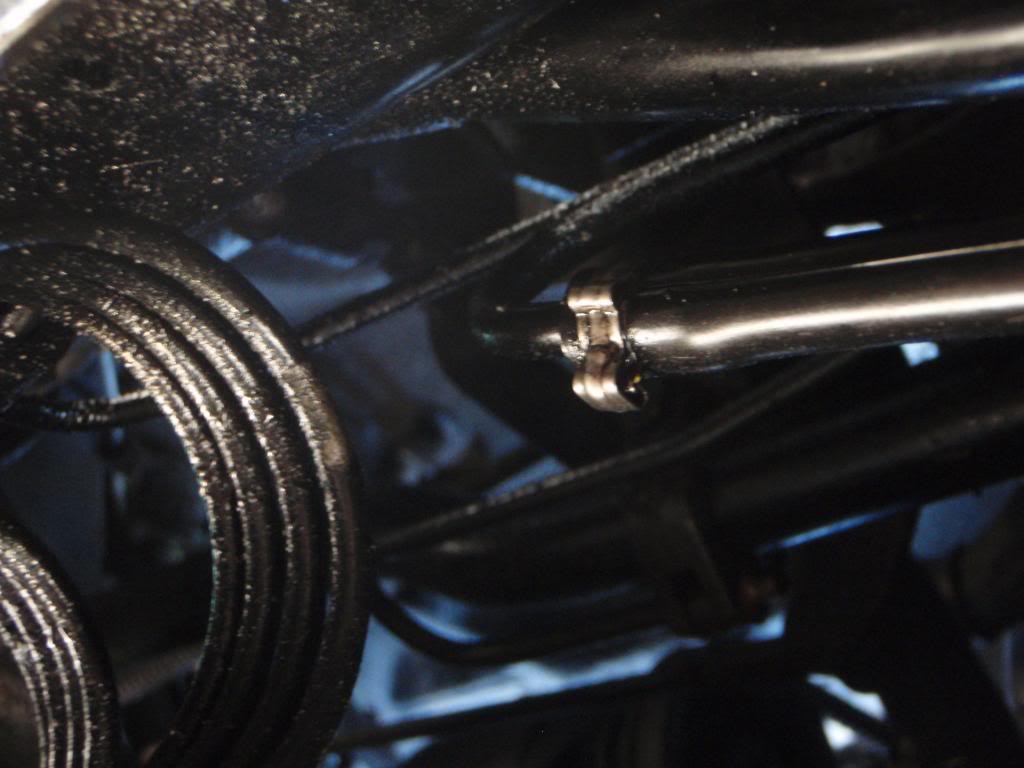 What's the creamy plastic bit here? Can also see the water leak in this picture, juts needs a new jubilee clip I hope, or maybe a new hose. 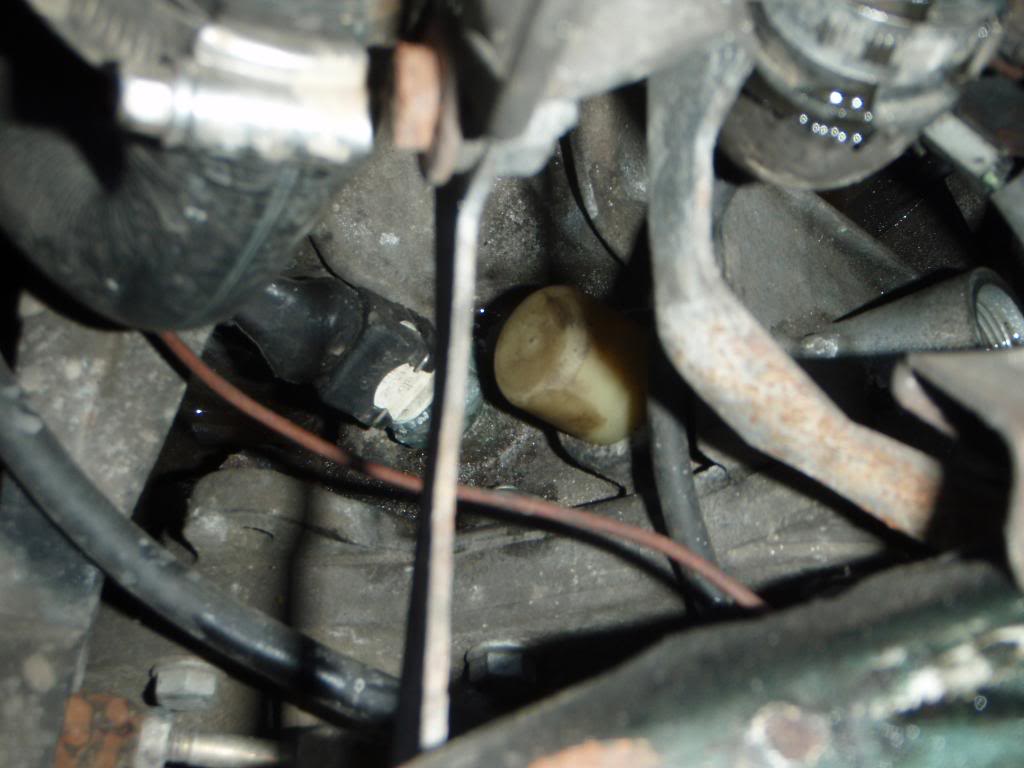 Drivers side brake disc from behind, there's a wear ridge, and the pad must be worn to not be using the full depth of the disc. 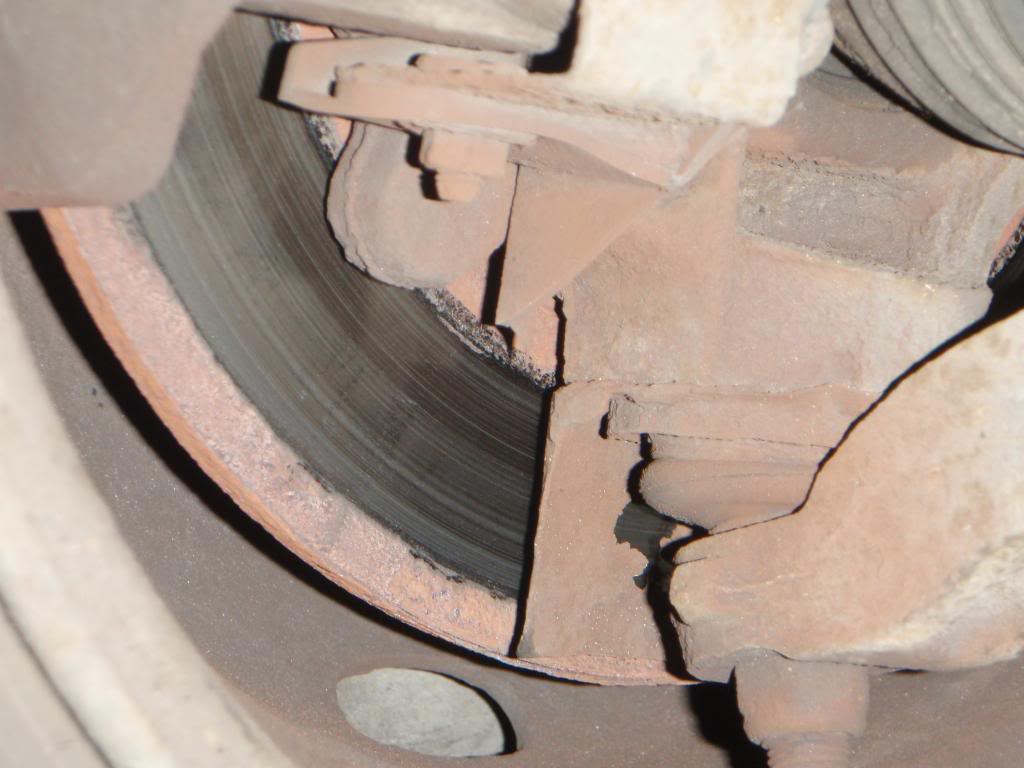 Passenger side looks much better! 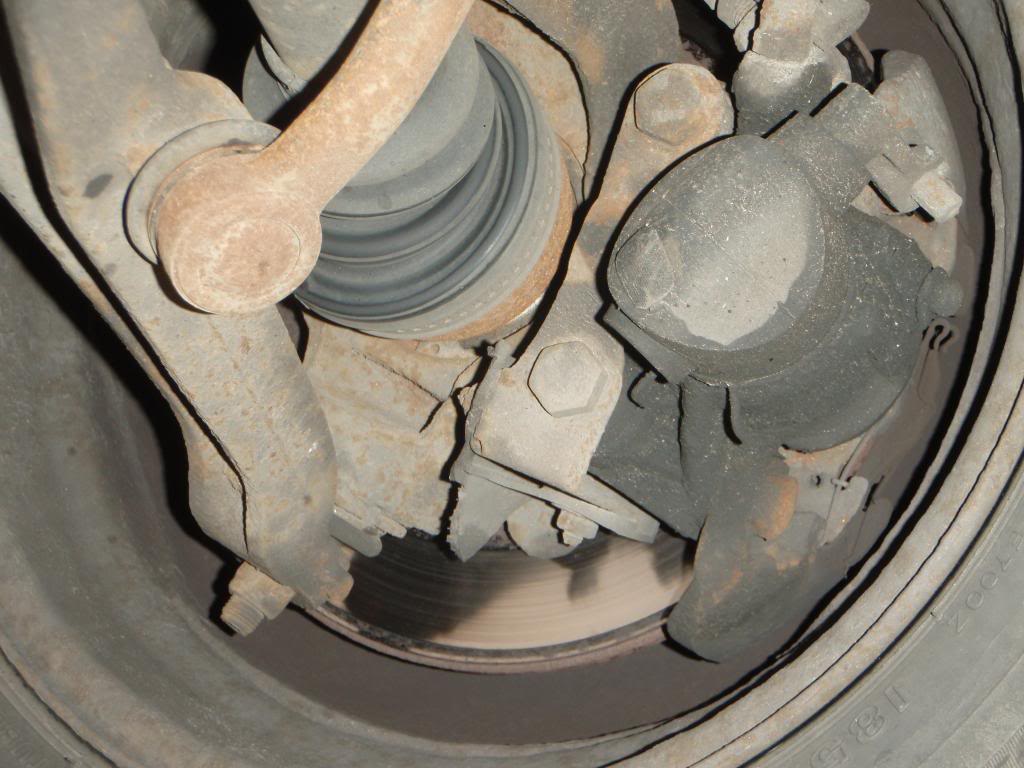 This is the passenger side driveshaft where it enters the gearbox, should this part be exposed? Looks like it's weeped/does weep oil, or that it should be covered. Other side is the same, but has other stuff around it that shields it a bit, not a boot or anything, more like a metal bracket for some other purpose! 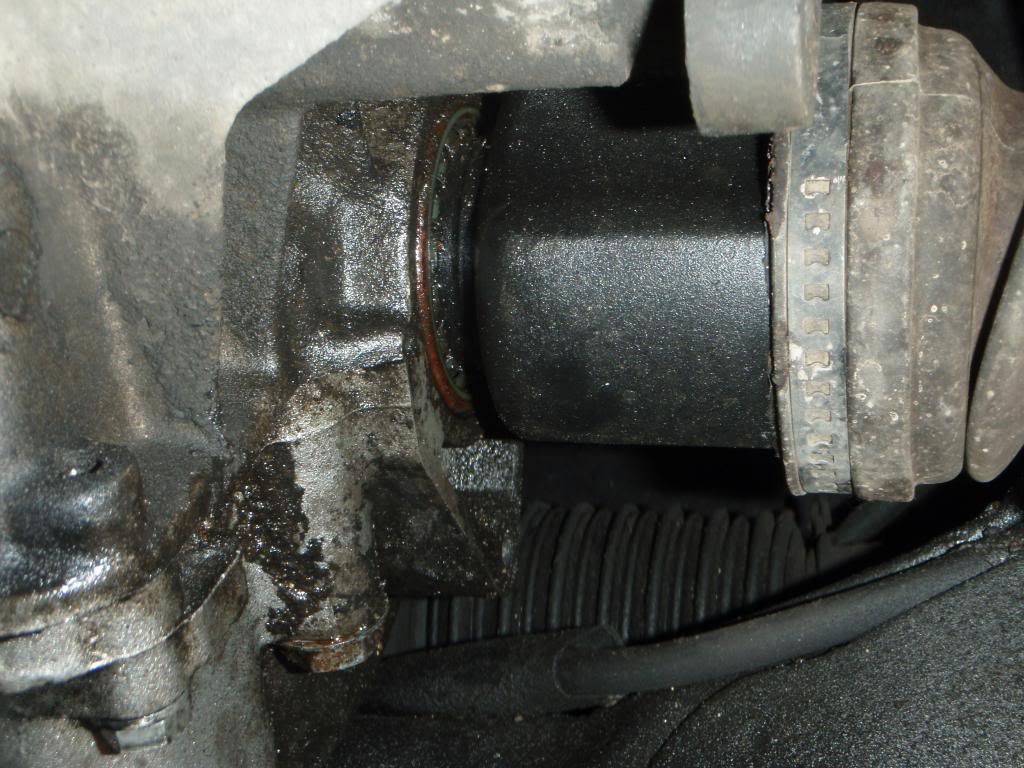 The source of all the crackling noises when you have more than two electrical bits on at the same time (e.g. lights and wipers), a bloody buzzer! Why on earth would you wire a buzzer into the rear light cluster and towbar electrics? Other than this, the towbar wiring was connected quite tidily to the light clusters, with these little blue clips, not seen them before but they look quite effective. 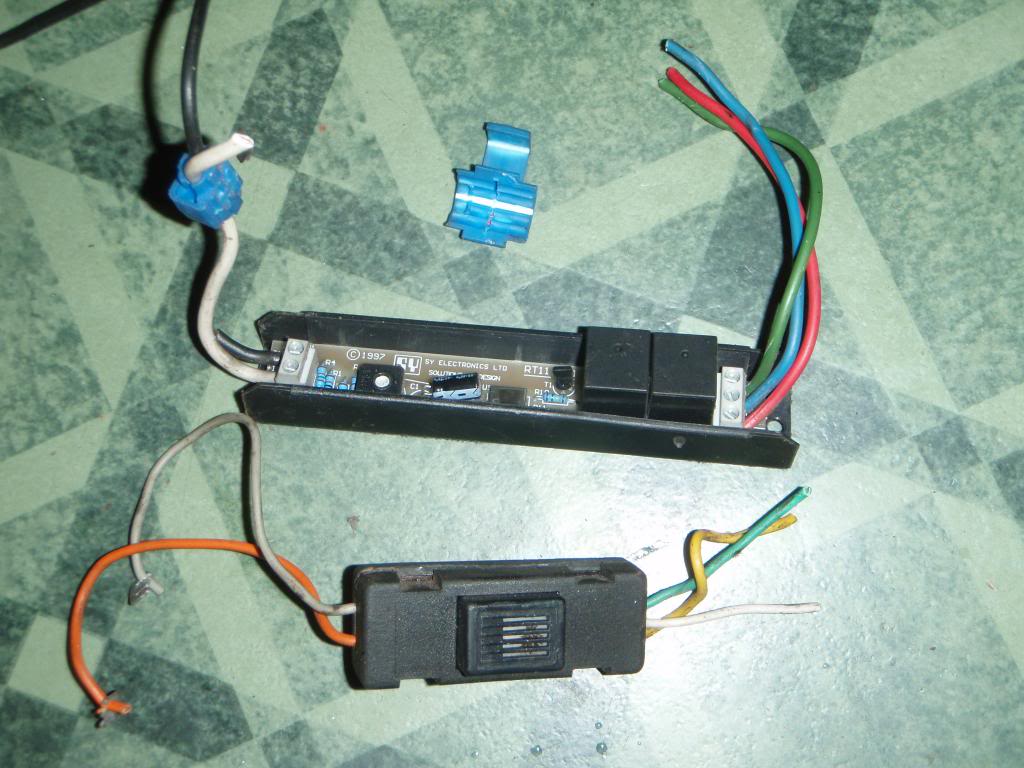 Shocking picture, but no towbar! Looks a bit odd... 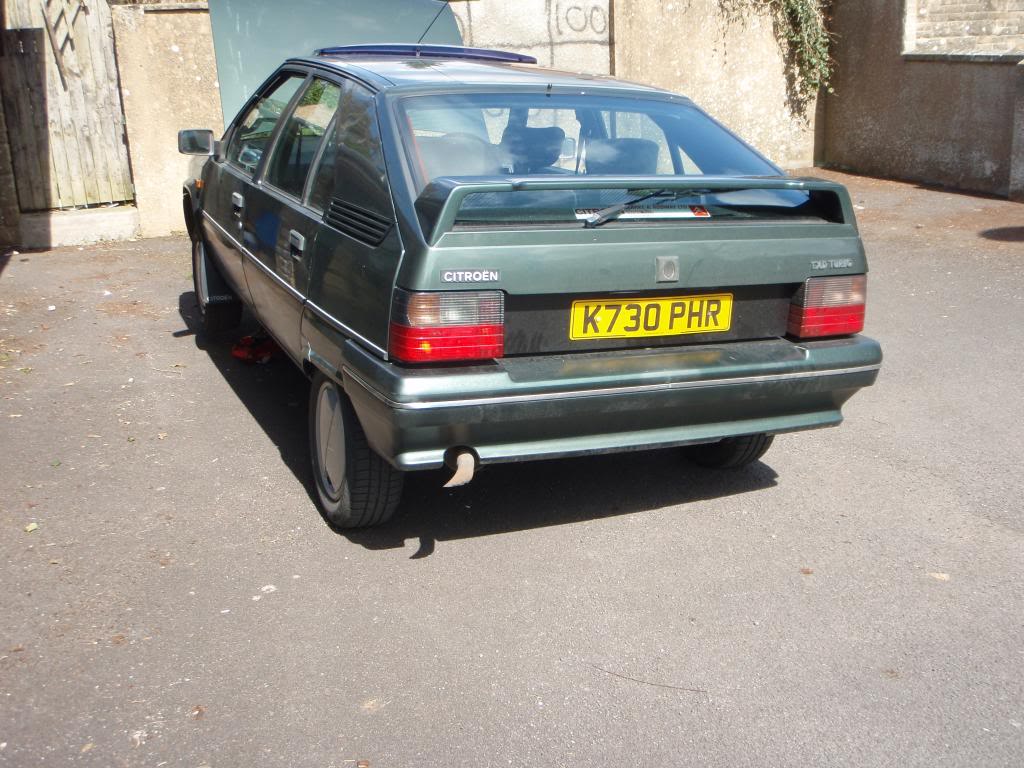 Going to clean the inside, and outside too if I have time. Cup of tea time though, need to clean myself too, been poking oily greasy car bits all day, and been rolling around on dusty, dirty tarmac too. I'm very mucky!

From here? I'd really like to do the water and oil leak, may as well do a service too as the sump will be off. Couldn't get to the turbo to adjust the wastegate, there just isn't enough room to get a mini socket ratchet in there. Wheel trims, want to do something about these too, I did think about speedlines, but decided to stay with the trims. I either want a proper set, as per Vince's lovely white TXI, or a good/perfect TZ style as a second best. Saying that, i'm thinking about bidding on the early GTI/Pilot trims on ebay atm, we'll see how the bidding goes!
I'm not a Saint, or a James, but a Tom Saint-James!