And how few other cars there are using those old RN roads compared to the UK roads. I'm fine-tuning the dash south in a couple of weeks. Air-con re-gassed, new sunglasses..., can't wait!

Wow!. Chevronics must have pepped up that St Tropez a bit more than the factory.....

mds141 wrote:Split pipe running off the front height corrector. Dave Ashworth sorted it for me.

In 300 or so day's time the Challenge 'convoy' will be setting off from Calais... According to my notes here, there could be 12 cars - all but one or two will be BXs...

I know how things go, and although there will be others registering for the event there will be drop-outs. So it's probable, at this stage, there will be between 10 and 15 teams/cars. A decent sized group. What has come to my mind is the question of spares and repair items/tools/equipment. There could be an awful lot of duplication so wondered what people's thoughts were, regarding co-ordinating what's taken - in an effort to reduce weight for team's cars - and to ensure we have enough to give any BX that fails a fighting chance of continuing. We probably only need, for instance one 2-tonne trolly jack...
• 1992 Citroen BX TZD Turbo Hurricane
• 2006 Xsara Picasso 1.6 16v
Top

42 weeks or so to go (still over two months to go before I start pestering people for registration forms etc. too!)...

Hmmm spares for the trip. Assuming that I take the car I'm planning to, how much does a spare 4x4 drive train weigh exactly?

The main thing is that you come along.... and to be honest, the Visa might prove pretty interesting in a slightly OMG way. As for the 4x4 surely 'just'

I suspect that the Visa may get the same initial reaction as the GS did for those who didn't see me throwing that around on it's trip. One thing for sure, if I do decide to take the Visa, I'd seriously consider up rating the brakes on it (assuming I can find the parts of course).
Mike Sims
BX 19RD Estate Mk1 - Timex!
BX 4X4 Estate - Oh god, I've done it again!
BX 17RD MK1 - it called to me!
BX14 TGE, - SOLD
XM Turbo SD,GS Club Estate,Visa 17D Leader,HY Pickup,Dyane Nomad,Dyane 6,2CV AZL,Falcon S,Trabant P50,3x Land Rovers (88" series 1,109" series 2a FFR,series 2a Marshall ambulance),DKW F7, Lambretta LD150 x 1.5,Mobylette SP93,Ural Cossack,Ural M63,CZ 250 Sport,Honda Varadero 125,lots of bicycles & tricycles including (but not only) Sunbeams,Higgins & Bates!
Top

I have worked out the timings on preparing the materials etc. and I am pleased to announce that although the 1st November deadline for return of registration forms is still in place, I will not be applying that deadline strictly to the members of this club - it's there mainly for prospective teams from the CCC and elsewhere.

However, although exceptions can be made regarding the November deadline, this clause in the T&Cs still applies: "The cost is £85 per vehicle... and payment in the form of cheque or bank transfer needs to have been received (by November 1st 2014). In the event of withdrawal a full refund will be given until the February 1st 2015 cut-off date, after which no refund can be given. The fee covers administration, information pack, one t-shirt and sticker pack.

I'm currently preparing the final draft of the route plan and that will be available to all who register.

In preparing the final draft of the route, I realise those who checked out the current Route Summary will certainly find it a bit different in detail.

I make no apologies for this: it's been a constantly evolving plan designed to take in as many elements of interest - places, roads, terrain - as practical. I aim to make this the best yet; drawing upon experience gained (and lessons learned) in 2009, 2012 - and 2013 (although I didn't do the Ecosse I did follow it closely). By making full use of online resources like Streetview and tapping local knowledge I'm creating a template that, as well as giving broad variety still offers options for those wanting to go off-piste!

Wow!. Chevronics must have pepped up that St Tropez a bit more than the factory.....

Shoulda been more specific. Went in the Terrano. Useful when shifting half the world to the Pyrenees and lugging the other half back. Had a few twitchy moments driving back due to a fuel leak but impressed myself with diagnosis, stop-gap repair and persuading a mechanic to produce a more durable repair and still arrive at Calais with three hours to spare for the ferry.

Time to take stock of where we are.

The route has undergone some tweaks, incorporating modifications suggested by those ‘on the ground’ in France. First, DAY ONE: The leg of the route that is always a bit of a grind is the Calais to Rouen section. It could be that familiarity breeds contempt, but it is a bit of an uninteresting start.

Most will need to cross the Channel but not everyone wants to cross Dover/Calais or via Eurotunnel. A fair number of potential teams are in the West of the UK. Those, and others in the North and Midlands (to be honest anyone not in SE England) might want to cross at Portsmouth or Newhaven - or even Plymouth rather than drive hundreds of miles to Dover.

So, the 2015 Challenge will start somewhere a certain distance into France, where the route to our first overnight (Gien) can be done at a more comfortable pace as the first third isn’t taken up by the Calais - Abbeville and Rouen run.

Before this decision was made, planning a way around Rouen, along interesting roads through Gournay-en-Bray etc. was the first step, and Neufchatel-en-Bray, on the A28 to Rouen, became an important way point; the point at which the familiar road to Rouen is abandoned for a something more ‘cross country’.

So, given the ease of access to and from the A28, (which of course is a key part of the network of autoroutes that links the ports of Cherbourg, Caen, Le Havre, Dieppe, Calais/Dunkirque) Neufchatel-en-Bray was clearly worth considering as the start point. It’s also perfectly poised for the drive south on ‘Day One’.

There are good facilities there: supermarket, fuel, eateries but most important an excellent camp site: Camping Saint Claire http://en.camping-sainte-claire.com/

There’s a decent hotel or two in the town too.

Therefore, on the morning of Saturday 13th June, we can assemble and given it’s comfortably less than 6 hours drive to the stop over at Gien get all our CB’s sorted etc. in good time. It’s a simple task to get us onto the A28 to travel one junction before heading south, into the countryside…

Neufchatel-en-Bray is 2 hrs from Calais, 40 mins from Dieppe, 1hr 45 mins from Le Havre, 2hr 45 mins from Caen, and an admittedly long nearly 4 hours from Cherbourg. But Calais is not central so penalises anyone from the West who has to travel there on the UK side.

Attached is the DAY ONE route. Subsequent route plans to follow as and when they become available. 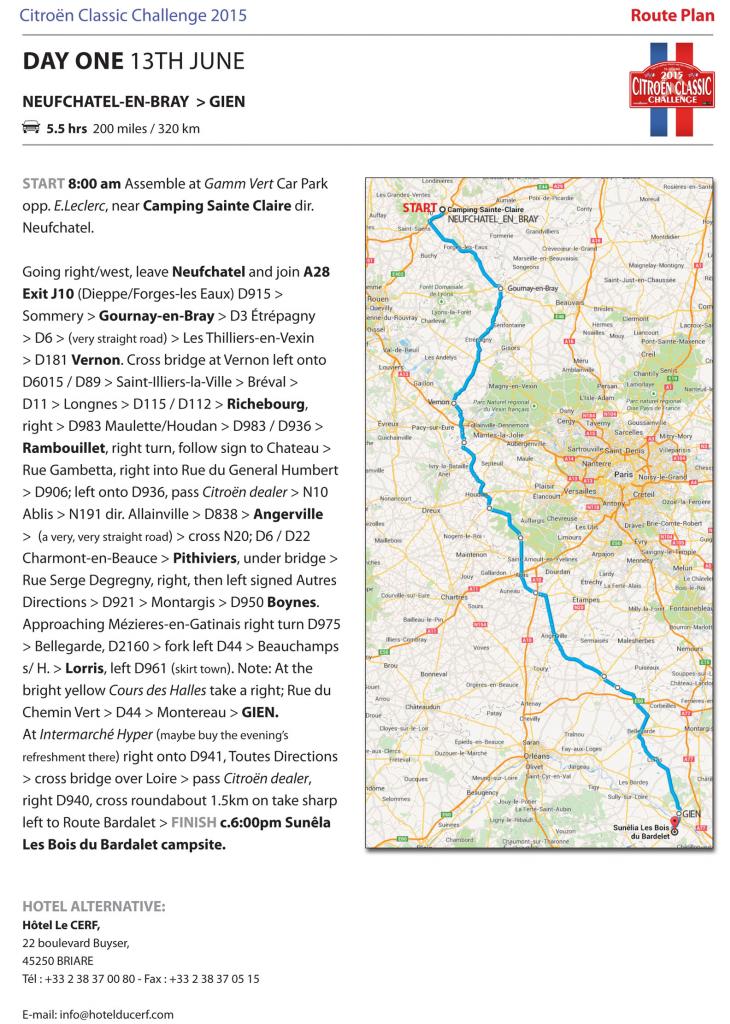 Well, that's what it says, but there is flexibility. However I would like to know by then, please, any who are serious about taking part and will likely take part... The registration form gives all the info you should need, but if you want more let me know.

Any interesting Citroën is invited to take part - preferably 20 yrs or older.

Entry pack includes a pack of car stickers, a t-shirt etc. Registration forms are due in November 1st 2014. Cost per car is £85. Doesn't matter how many people in the car within reason