Firstly, it is likely the property in the Lot near Cahor will be sold shortly. So that idealistic diversion ends. Though I know the roads round there.

Secondly, I remain a dunno, as I have so much work still to complete here afterr being ill and inactive for two months. That said it should be completed in the main and the idea of doing something completely different as a reward still appeals. The next few weeks sees plumber and fence/shedding done. Builder hopefully sorted and booked and more serious shedding as a result.
I have lost my old storage facility so another 1000 sq ft of stuff must squeeze in here or up in Cumbria. In Cumbria I must sort out the property attracting rates so it pays its way, or is sold.

Thirdly, I need to move forward on sorting out a car that is not carrying an injury. That becomes simpler as it will in all probability fall to the TZD unless I get cracking on the Gti. With all the other things to do the Gti might be one task to many.

Updated route overview. There's one minor tweak to do on the last day's route but essentially this is it: 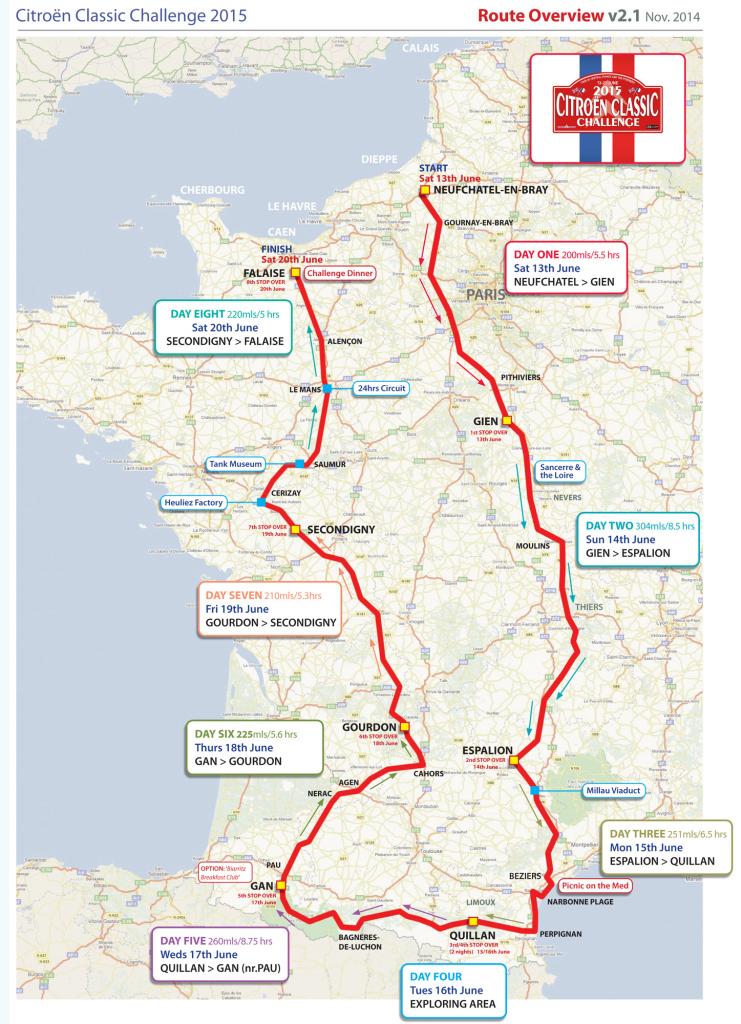 I'd like to visit the Michelin Visitor Centre in Clermont Ferrand. Anybody else fancy an opportunity to collect some Bibendum memorabilia?
Mark Smith

That's the sort of suggested detour I welcome. I wouldn't force anyone into the traffic nightmare of Clermont Ferrand, but could be an interesting option!

In case anyone was wondering: The 'Biarritz Breakfast Club' is just that; a completely optional initial leg to the route on day six, which would involve setting off very early - say 6:00am and making the Atlantic coast in time for brekky, and then a drive up Dax/Mont de Marsan way to join everyone else for lunch in Nerac/Agen...

(By the way for those who want, there's a brilliant Michelin starred restaurant in Agen... lol

Slight amendment: Due to the hotel I'd selected at Argentan being full/too small, we finish in Falaise

I suggest booking your room asap:

(FYI: If you pay via Cheque, those cheques WILL NOT be paid into the account until AFTER the 1st November AND a FULL refund is available to those who need to pull out, prior to 1st Feb 2015).
• 1992 Citroen BX TZD Turbo Hurricane
• 2006 Xsara Picasso 1.6 16v
Top

I appreciate it’s still a long way off and many won’t necessarily want to commit yet to the extent of filling in the entry form or paying the registration fee. As it stood, the deadline for submission of the forms and fee was 1st November 2014. The cut off date for refunds against cancellation was 1st February 2015.

THIS HAS NOW BEEN REVISED.

The new deadline for submission of entry forms and payment of the registration fee is 1st February 2015. The cut off for refunds is now 15th March, at which point I will order the materials due to each team (stickers, shirts etc.).

Anyone who submits a cheque in advance will not have it cashed until after 1st February 2015.

If, by then the number of teams (ie cars) wishing to take part is under 9, I will very probably cancel the event and issue refunds to those who have paid, sorry. We really do need a decent number of lovely old Citroens to make it worth doing - and not to appear a damp squib

I have to say I've received two forms from eager prospective participants. I know there are others who will definitely want to come, but can I ask everyone who does want to take part to let me have the forms at least, asap. Payment can follow by 1st Feb (cheques will be held until then anyway - and in all honesty I'll wait a week or two before paying them in after that date if the number of teams is looking like it might be borderline)... As there's work to do at this end, I don't want to put all the effort in to only end up cancelling the event due to lack of teams, so I'm sure you understand. Thanks!

Somebody asked what form the route plan will take. Well it'll be on sheets: Either one or two per day's drive. The route is designed to offer a lot in the way of interesting roads - some quite challenging - lovely countryside, varied topography, characterful villages and archetypal French towns. But having said that the route is only a suggestion, and teams are perfectly at liberty to go 'off piste' and explore variations; the only real stipulation is start and end points. Fast autoroutes and Péage (toll) roads are avoided (with the exception of the Millau Viaduct) and the rule 'path of least resistance' hardly applies... Here is an example. Day Two (current draft):


*Note: although we'll all probably be using SatNav at some points, the routes aren't easy to follow using them because of the nature of regularly taking the 'back roads', avoiding the simple routes. So a co-driver/navigator will be kept busy too... 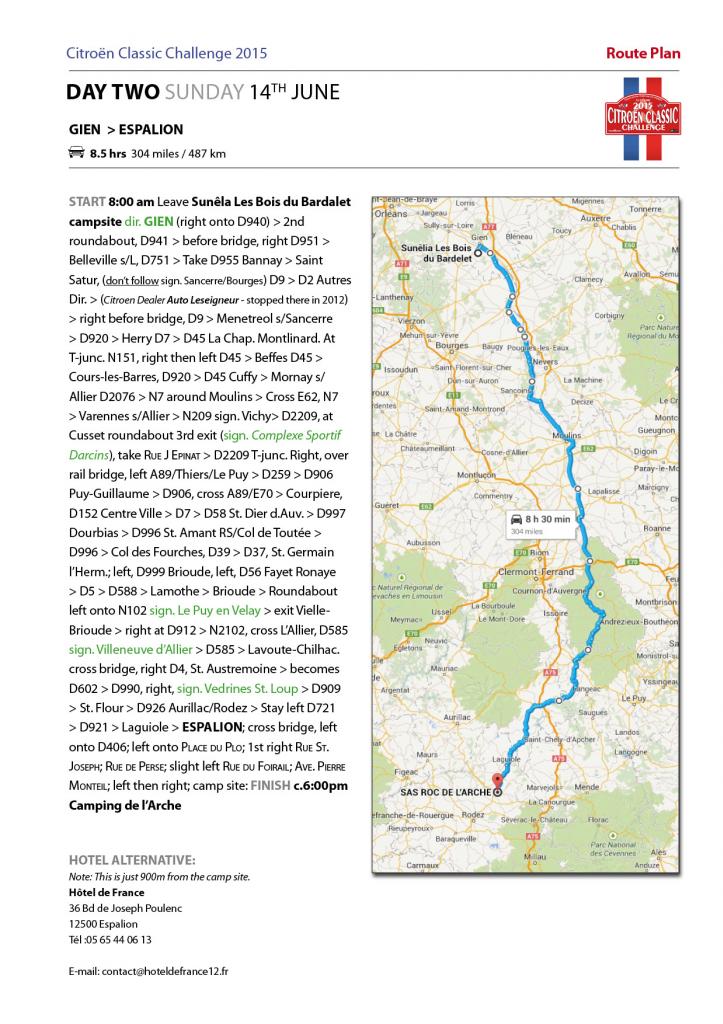 152 days to go - and please contact me - if you haven't already - (preferably send entry form/fee) by 1st February so I can start the more detailed arrangements for camping, making up of stickers, ordering of print, and the Ltd. Edition Polo shirts etc.

Cheers Phil. Thanks for all the hard work and dedication.

For those not on FaceBook, here's a little site with some info on it. This will become the Gallery for pictures of the event eventually.

I've booked afternoon tea at the famous (to those familiar with the history of racing at Le Mans) newly refurbished Hotel de France, 3:30pm Saturday 20th June: All teams are welcome as well as any Citroenistes who're in the area at that time!