Reading back through, forgot to reply to this, and yes, it does now wear C5 rims and doesn't look too shabby for it either. Z trims are a favourite, but I'm out of cash now, at least until some more work comes my way. Being self employed can be a bit of a bugger at times, especially in February when everything just seems to go dead. 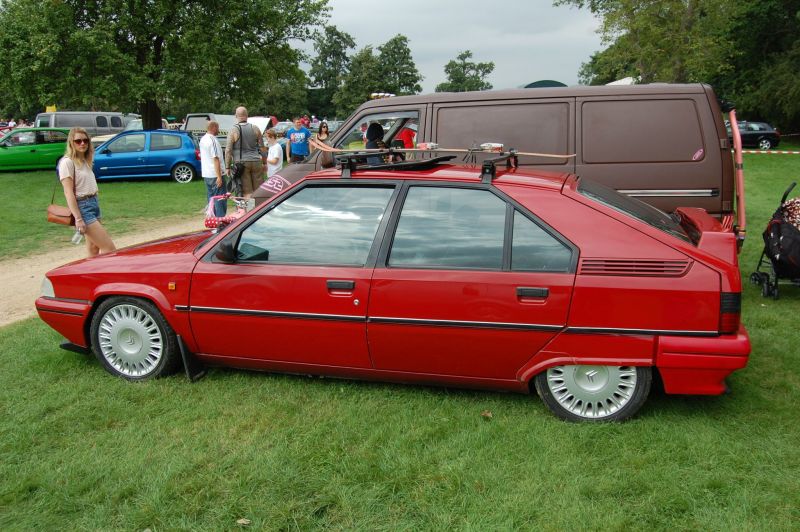 OK mate, George has some Z trims which he will sell you for £20 or so, he's up near Skegness.

What do you do for a living, out of interest? I'm setting up a casual sort of mechanic/handyman kind of service. just to test the water really. If it does take off then I can quit my current job.

@Tim: if he still has them in a few weeks/months (depending when work picks up again) I'll drop him a line, Skeggy isn't too far from me. I think those C5 wheels are a 16".

@mat: Arts and crafts, primarily artwork by commission. When it's good, it's very good, when it's bad it's a ball ache. Good luck with the venture!

I was going to crack on cleaning the engine bay today. I like a clean engine bay, it makes leaks easier to find and maintenance is more pleasant when there isn't gopping globs of oily greb everywhere. The bitterly cold weather meant it wasn't to be, but today was not without some work at least. I started with this. 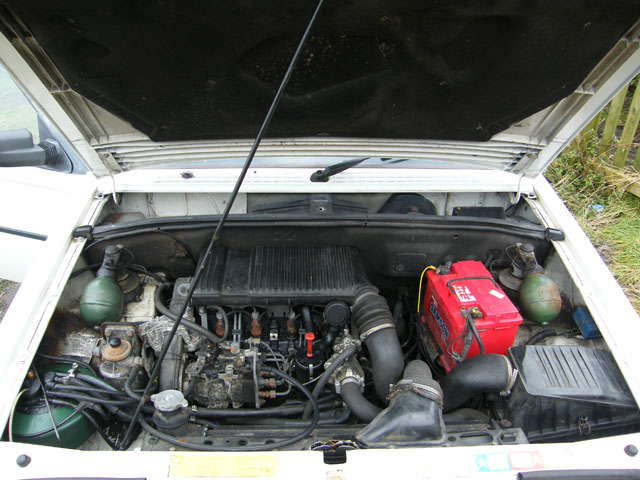 Most of the dirt is road muck and some oil, there seems to be little in the way of stubborn grime and what I have cleaned came off mostly with very hot very soapy water, some rags and a toothbrush. The airbox got cleaned up, as did most of the inner arch on the same side, but by this point I was losing feeling in my nose and fingers so I called it quits. 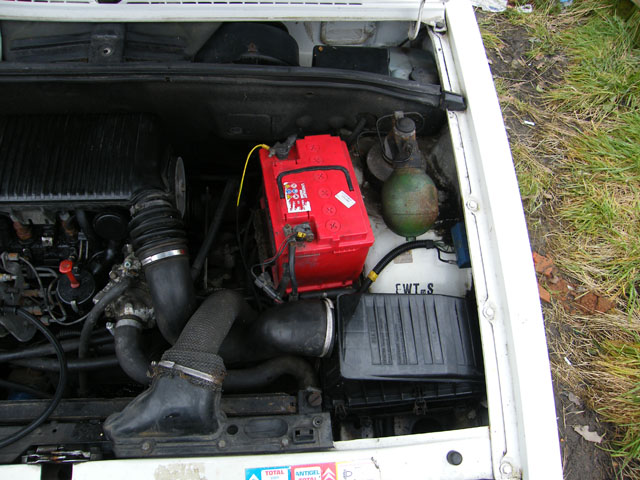 I did still take the opportunity to do more investigating. Starting in the engine bay, I know the oil and filter need changing from checking the oil and finding it was as black as black thing but I hadn't checked the air filter. Happily, the air filter seems good so that's one thing off the list. 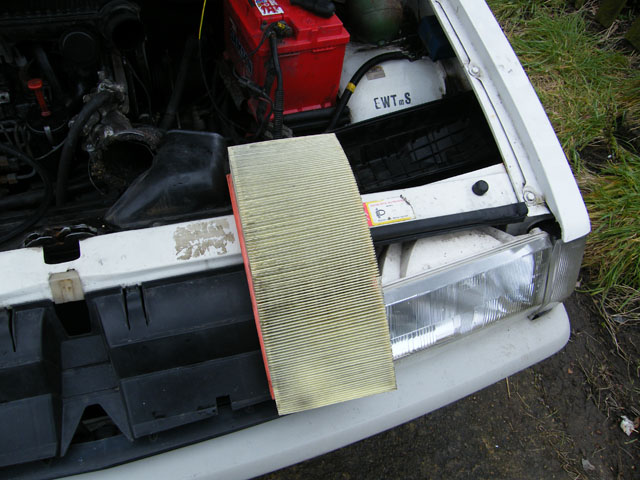 I was perplexed by the battery earth strap which, rather than the braided strap I'm used to seeing, appears to be household electric cabling wrapped in electrical tape. Surely this can't be right? 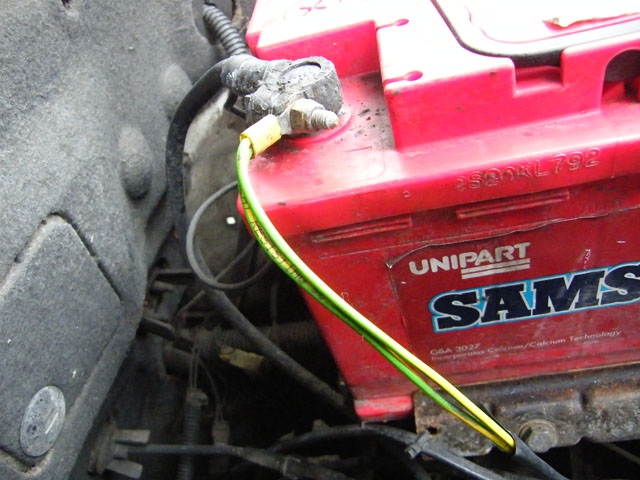 Diesel pump next. The pipes connected to this are rock hard so they will want replacing, I haven't removed them as I don't have replacements to hand but I wouldn't be surprised if they break when removed. If possible, I might end up taking the pump apart to clean it out too. 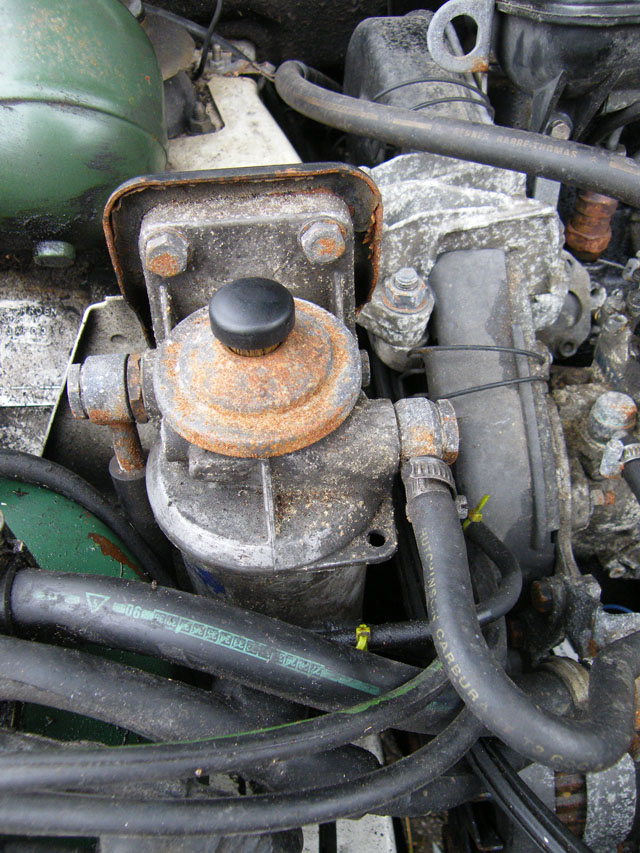 There's quite a bit of oil about the place, I wanted to try and find out where it was coming from. Some of it is getting sprayed up behind the back of the engine by the looks of things, the rest is running down the block and collecting all manner of detritus to make a sticky, clumpy mess. 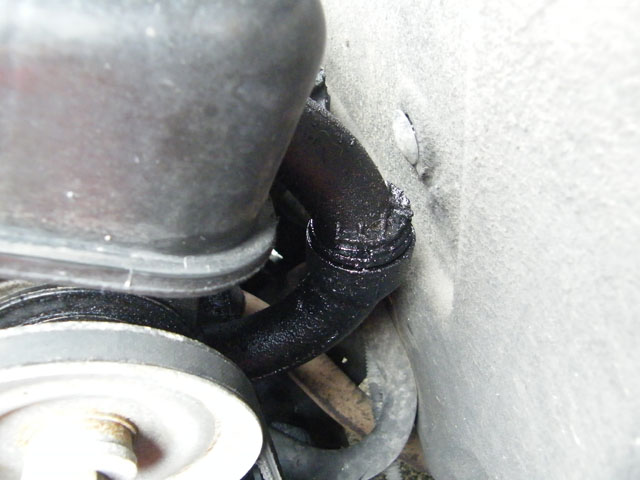 A quick examination seems to point to the top gasket, particularly this corner where there's some very wet oil. There's not much oil to speak of above this point, but lots further down, as though it's run from the gasket down over the block. 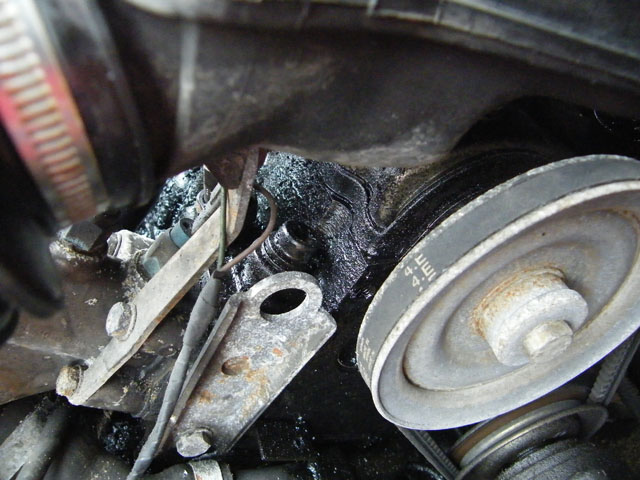 Uncovered another little rust blister that will want dealing with too, on the inner wing. 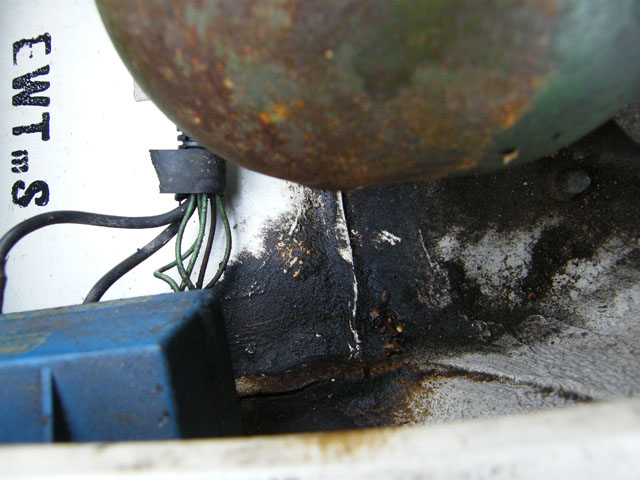 Checked the exhaust and found the source of the blow easily enough. Looks like the backbox has exploded. 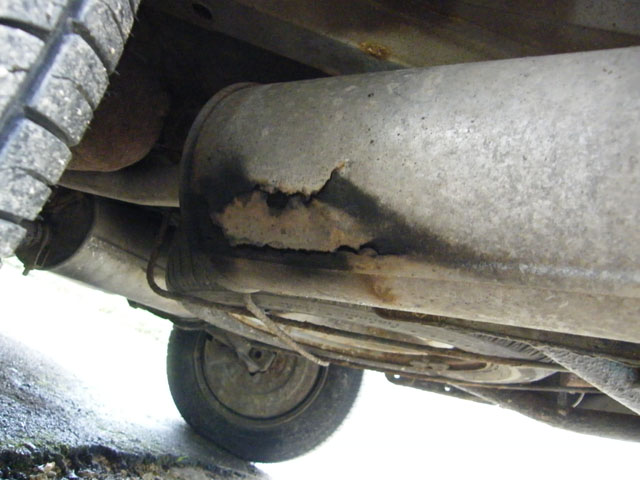 While I was checking the exhaust, I had a good look at the rear hanger which is, amazingly, still attached. 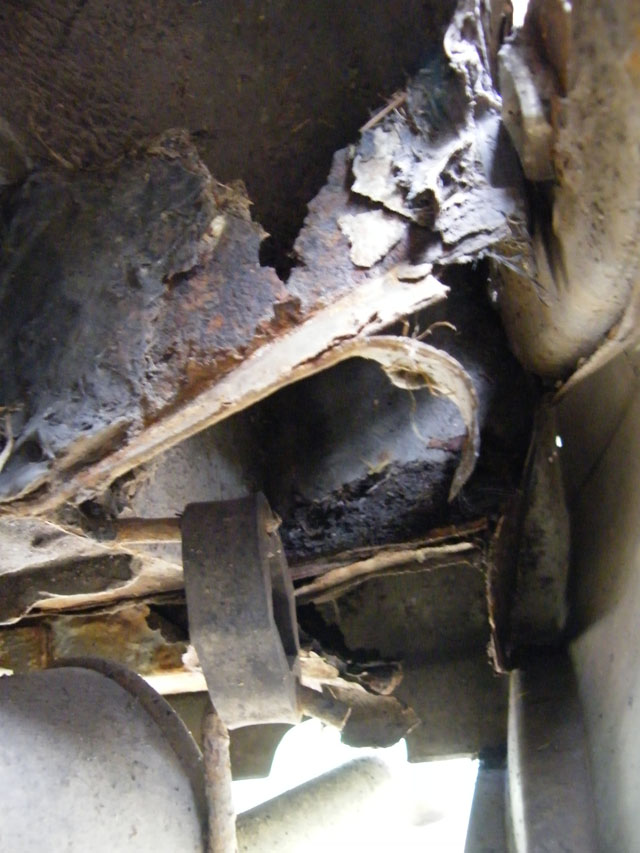 This gave me chance to use the camera as a second pair of eyes to have a proper look underneath. The flat metal sheet that joins the wings and bumper to the structural elements mostly has the consistency of wet cornflakes, what's left of it, but it does at least look easy to replace. All the structural bits look scruffy but solid and certainly don't seem that willing to bend or drop off when handled. Have some pictures of some rust. 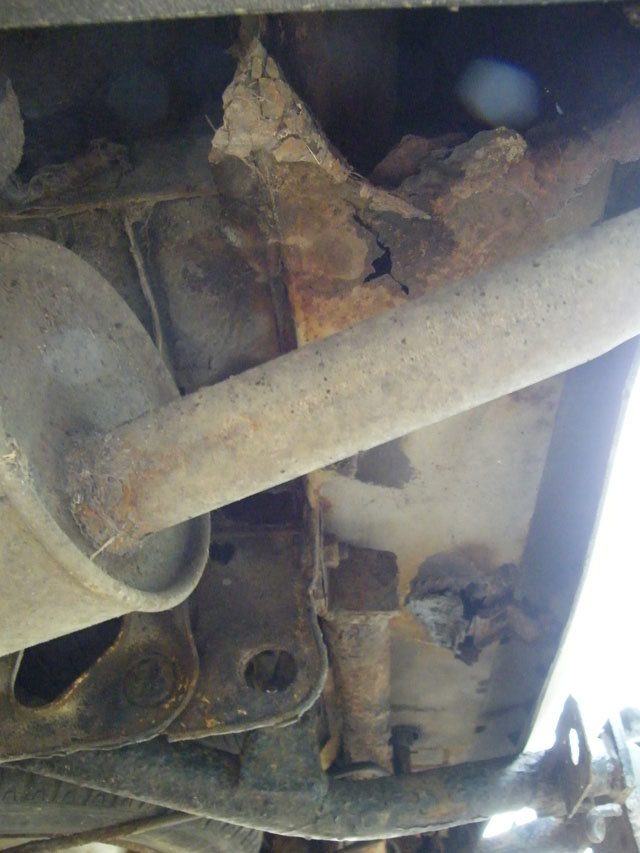 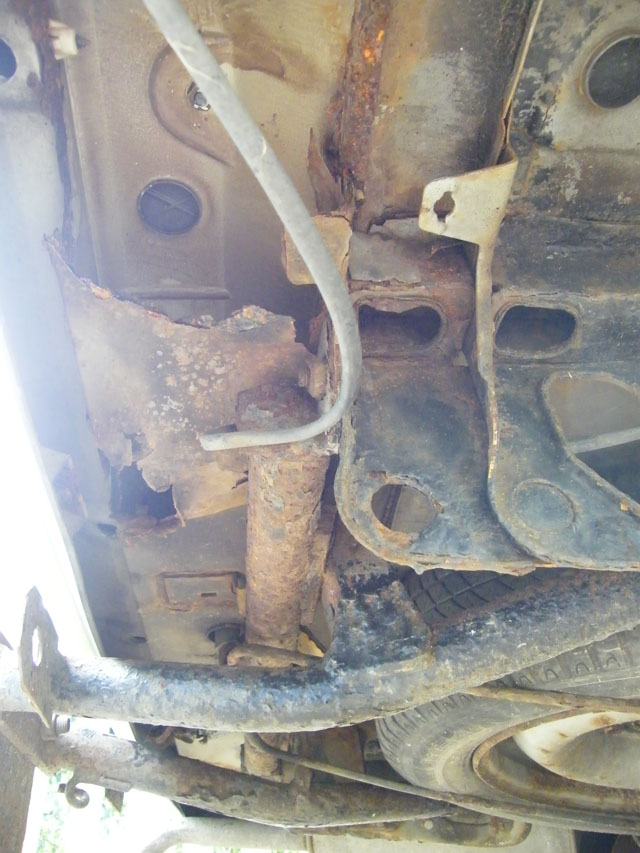 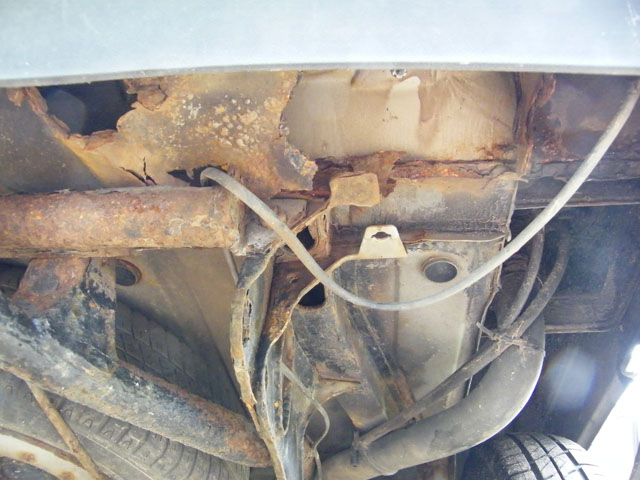 And now you see why I daren't take the back bumper off to investigate further; I doubt it would go back on. You can just make out two little holes where the seal, light cluster and bumper meet in each corner. 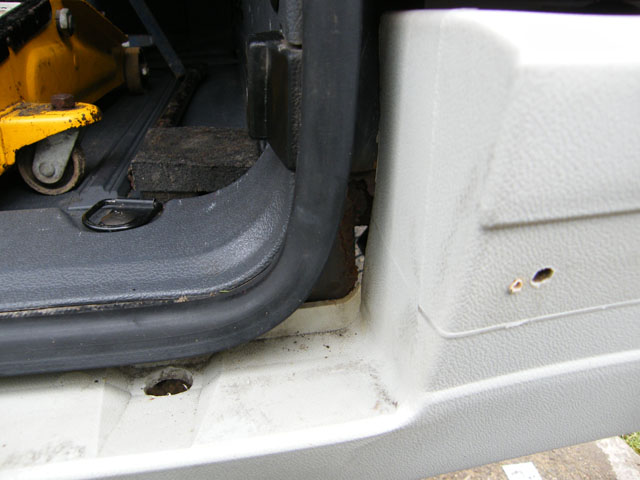 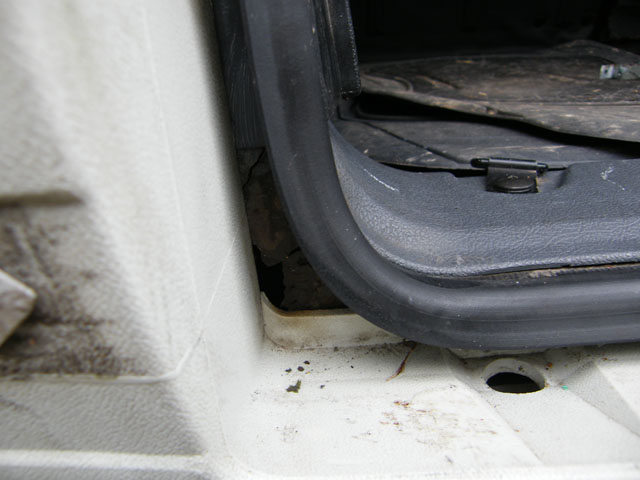 I've seen green and yellow battery earth to bodywork cable on a few 205s of that era, and it looked to be factory fitted rather than a bodge. My BX has two black earth cables, but assuming it's got a reasonably small individual strand size (for vibration resistance) the sheath isn't that important.

Ill mention it to George, he has paypal so you could always use a credit card if you use one.
Lots of Motors, mostly semi broken....
Top

In all honesty, I'm thinking sheet metal and a welder are probably more important than another set of wheel trims

And rightly so. You have to watch out for the wheel trim Police around these parts. I'm a rebel with TGD trims on a TXD! I have to go into hiding on regular occasions.
www.classichub.wordpress.com
Top

Not sure if it will count for the whole width of the rear box section, and it's a dodge to get through the MOT at best, but some of that rust in the rear box section is classed as non structural with the tow bar removed (guess how I know, & no I didn't).

I've just remembered. This car lacks a secondary bonnet catch/plastic openy bit. Does anyone have a spare they could send Mr Vulgalour?
www.classichub.wordpress.com
Top

I didn't even know that was missing on account of the bonnet being easy to open and shut, though it did seem strange that there's no safety catch on the bonnet. Got the pedal box back today but it started to snow as it was getting dark so it's only loosely refitted, I'll finish fitting it properly tomorrow/when it's warmer.
Top

Great success! Yesterday, my pedal box returned all lovely and repaired. The accelerator pedal moves a lot more freely, probably because it's not trying to move parts of the pedal box with it. As Mr Cobblers put it "It's no Boyd Coddington, but it is solid." and he's quite correct. Many thanks to Mr Cobblers for stepping in and being a gent with the welding to get me mobile again. 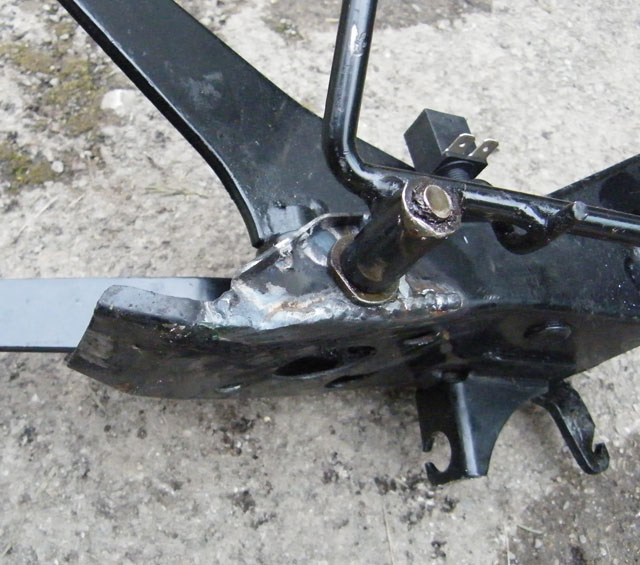 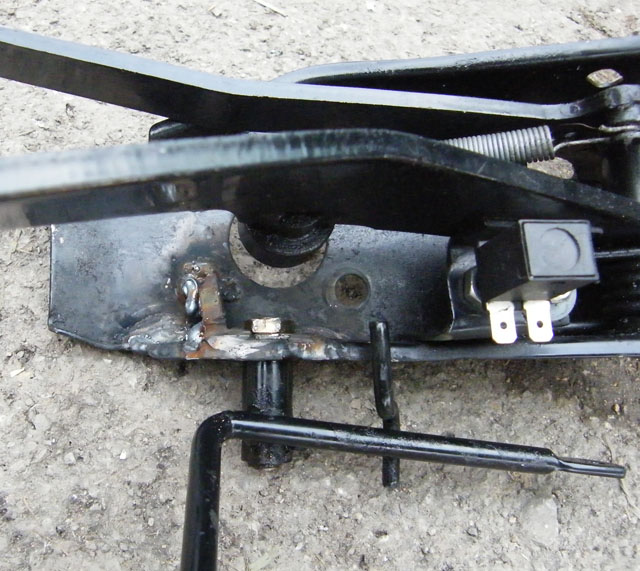 It was a bit of a battle to get the clutch cable connected properly, that's a job I hope I don't have to do again, there was a strong risk of me hurling it across the fields when it played the game of one part clipping off just as the other part clipped on, repeatedly. Happily, I had support in the form of people that hadn't being squished into the footwell in the cold trying to make it all fit properly and we got it loosely fitted. Today, I got everything tightened up and we reconnected the clutch cable in the engine bay which my Dad had disconnected to try and give me more play in the cable, which didn't work. Also plugged the throttle cable back in and it seems to be fine, it didn't break, but I suspect I'll have to replace it anyway.

The last time I drove a diesel was about 6 years ago, one of those Meganes-with-an-arse (which I still like the look of) and I'd forgotten about the way na diesels are when you put the pedal down to go; sort of nothing, and then everything all at once, very unlike a petrol. I do find that the throttle pedal feels very stiff when first pressed, you have to use a bit of effort to get it past that point. I can't see anything amiss and I can't see where that skinny metal bracket I found in the soundproofing goes to see if that was connected to anything. Maybe there's something wrong or not fitted that I've missed, but it feels okay, if a little strange and I can't see where anything might connect.

Of course, this meant I could finally go for a drive. I didn't go far, just far enough to get a feel for the car. Intermittent power steering is a little strange as a driving experience, but didn't feel particularly dangerous or alarming. The brakes are sharp, certainly sharper than those on the Princess. The car felt very perky too, once you get moving, and happy to be thrown around a bit though I didn't try and find the limits as I've still got to learn the car. Seating position is blissfully ergonomic, my only issue being that the wiper stalk feels slightly counter intuitive. Gears are taking me ages to get used to, again because of the nature of the engine more than anything else. The clutch, for all I'd been told it felt like it was worn, feels brand new with the bite very near the bottom of the pedal travel unlike most of the stuff I drive which has the bite half way up or near the top of the pedal travel.

Overall, the car feels right, it feels well suited to me and the acres of tinted glass gives unparalleled visibility. I felt very much like I belonged in the BX in a way I never did in the Maestro or even the Polo. I still prefer my Princess, but only because that car has a certain je ne sais quoi that the BX doesn't, but it's a very close run thing between the two of them.

These, I like a lot. I don't know if I'll ever use them, but I like that they're there. 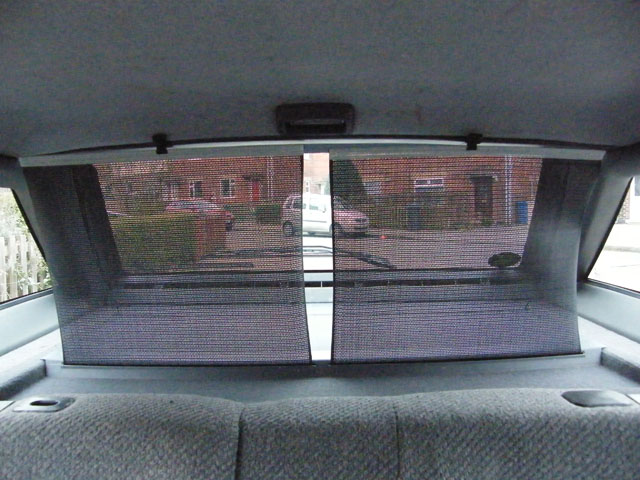 I gave the glass a good clean inside and out and did the wiper blades too, it really improved things. I hope the snow isn't here long term, I want to get the shabby side cut and polished properly in time for Brooklands on the 10th of March where the BX will be earning its keep collecting parts for the Princess. In the meantime, here's some pictures, because I like pictures and I think the BX is very photogenic. 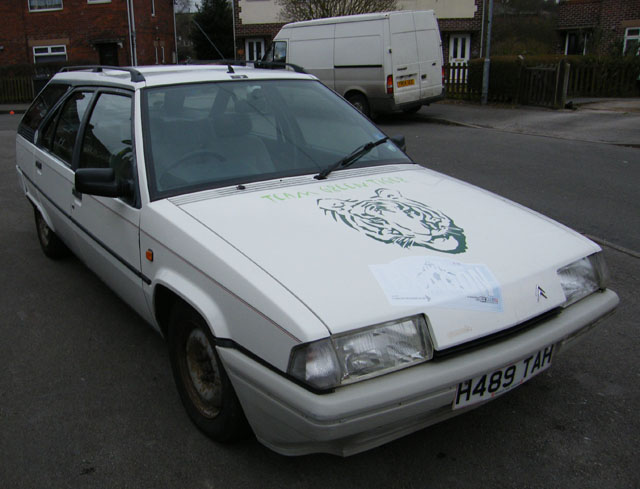 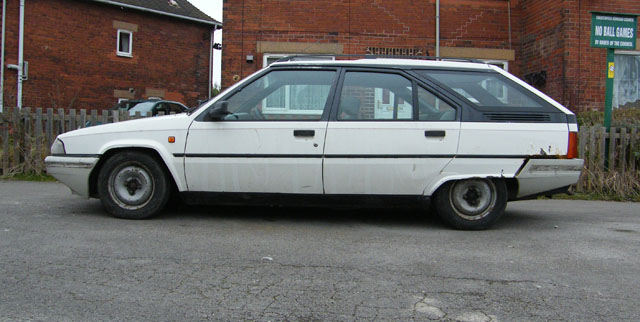 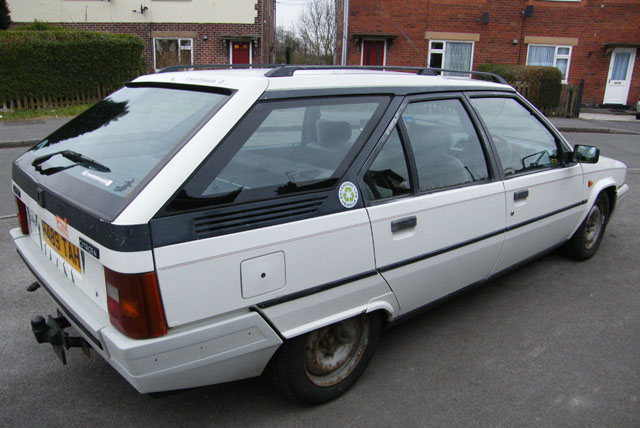 Another problem I found is that the front washer bottle appears to be leaking. I'll take it out and investigate properly later. The rust holes on the inner wings are both caused by the washer bottles so they have to come out anyway, I'll perform a derust at the same time, looks like a straightforward patch repair with reasonable access at least.
Top
Messages: 196