toddao wrote:My eldest - Sovay - who is now four, has passed the 15kg mark and now sits on a booster seat in the middle which is not so wide as the proper kiddie seats. Maybe the Picasso is even narrower as it has more padding in the doors? The BX is like a rectangular shaped baked bean can and is very space efficient in that respect, though, as you point out, not up to modern safety standards.

Picasso's uber wide! It has three full size seats in the back - it's so wide it can be a pig to get it on our driveway. In terms of room it's brilliant.....it's just in a different league to regular cars. It's been a good car too.

Horrible to drive though

Kitch wrote: The wishbone will be easier to access if the gearbox is out, so I'll do the clutch at the same time.

So yeah, she's alright! With a bit of luck back on the road for April

! wishbones are a piece of piss mate! If you were next door or something I'd replace it in under an hour.
But, since it needs a clutch anyway....

Either way, bloody result I'd say! You must NEVER get rid of that car, it isn't a car, it's a demi god of BX's!
Smokes lots, because enough's enough already!

Kitch wrote: The wishbone will be easier to access if the gearbox is out, so I'll do the clutch at the same time.

So yeah, she's alright! With a bit of luck back on the road for April

! wishbones are a piece of piss mate! If you were next door or something I'd replace it in under an hour.
But, since it needs a clutch anyway....

Either way, bloody result I'd say! You must NEVER get rid of that car, it isn't a car, it's a demi god of BX's!

I've never done wishbones on one. Attempted them once, many years ago on BAH. Couldn't get the nuts undone, so wimped out and gave it to a local garage to sort for £40!
This time will be different. I've got to do the clutch, no question, and access will likely be even easier with the gearbox out so I might just do it then.

It's tough with the car. I do never want to get rid, but I've already got another BX I don't want to get rid of either. You never know, when I'm done with it (can't see that happening in my current situation) Simon might want it for something (unlikely, he doesn't possess the balls to drive it around anymore....hello Simon

Today The Estate managed its third amazing feat (other than starting first time after a 3 year lay up, and us finding out it's got less rust underneath than the majority of Focus' on the road).....I decided that I would stick it on the rolling road at work: 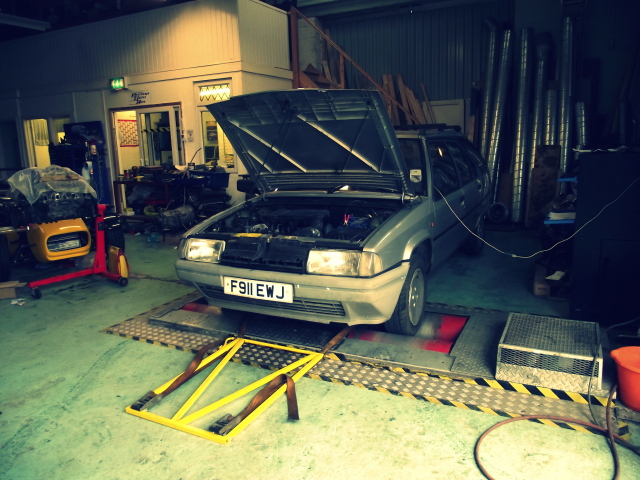 Still hasn't had a cambelt, still has a knackered clutch, still has 7 year old diesel in, still on engine oil that was put in back in 2005 (IIRC) and still has a radiator that can't hold water.

First run blew the pipes/cobwebs out:

I did one more and ended up with three runs (maths, innit). Result? 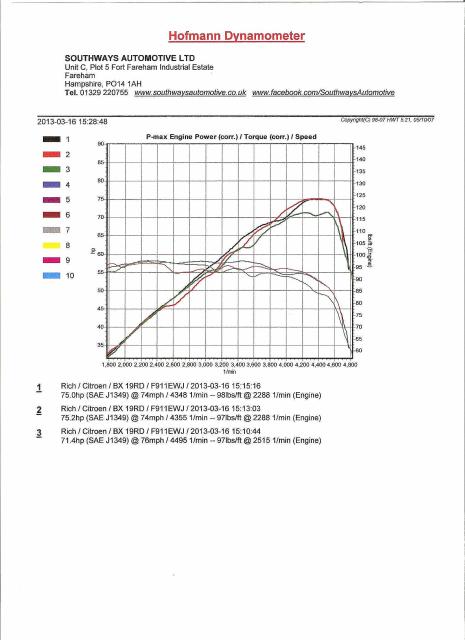 Doesn't look impressive at all....until you read that it's supposed to have 69bhp (or 71bhp, depending on what you read) from the factory! Now I'm a dyno operator, so yeah I know a flywheel figure on a rolling road dyno isn't a gospel figure. I understand how the device works and most aspects of the system.
But it's close enough to smile and pat the old girl on the bonnet once more

The graph also shows what I love about driving it. It's slow and there's little grunt. But all the torque is does produce, it gives you instantly, as soon as you ask for it (unlike a turbo diesel) and it holds that torque pretty much until it runs out of revs (unlike most turbo diesels).

Here's a comparison to a TD from the rolling road day I held a few weeks back. It was a healthy TZD Turbo (I picked it cos it was also an estate....hello Jaba!) 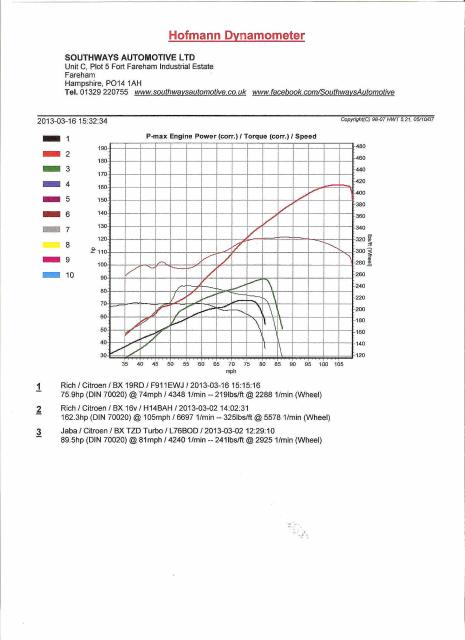 (I put the 16v on there too for comparison between the two cars)
See how the n/a diesel comes in much quicker with the torque? And that's a torque at the wheels figure (because torque of the flywheel isn't particularly relevant)....it's not far off that of a TD. I've always thought the 1.9 n/a diesel doesn't have the void between itself and the TD that some make out. This graph shows it.....many will say the n/a is a slow car, but consider the TD a quick one. Well, it's not....a 16v is a quick one. There's a massive jump up to one of those from a TD, but the gap between n/a and TD isn't all that big. I think the main reason the TD feels much quicker to drive is because that lump of torque advantage over an n/a comes in in a big lump when the turbo spools. The n/a distributes it evenly, nearly all the way.

None of it matters of course, as long as the car is enjoyed by the owner the numbers mean little. But this little test proved it's running happily (which I kind of got the impression of from driving it).

But I'll sort that one out.

Next stop....MOT. Time to get it back on the road!
CCC BX monthly column writer bloke thingy - bx@citroencarclub.org.uk

Last week was murder; sickness and trotts bug going round my household. All except me came down with it, so nothing in the way of work happening on the estate.

So with today being the 10-day deadline for a free MOT retest, I had to crack on. How did it go? 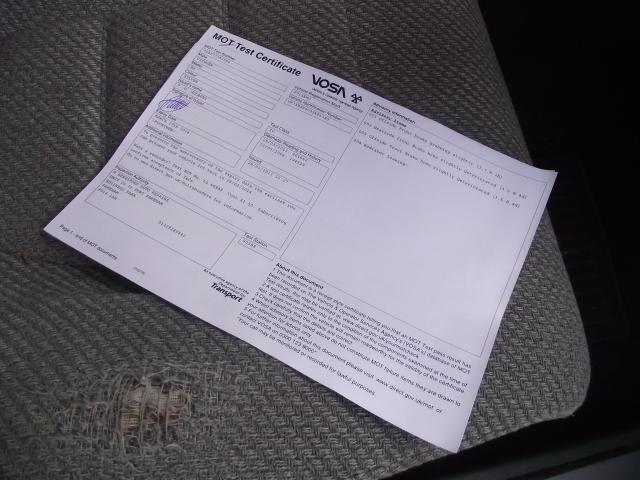 The Estate is ready to rock!!

This made me chuckle: 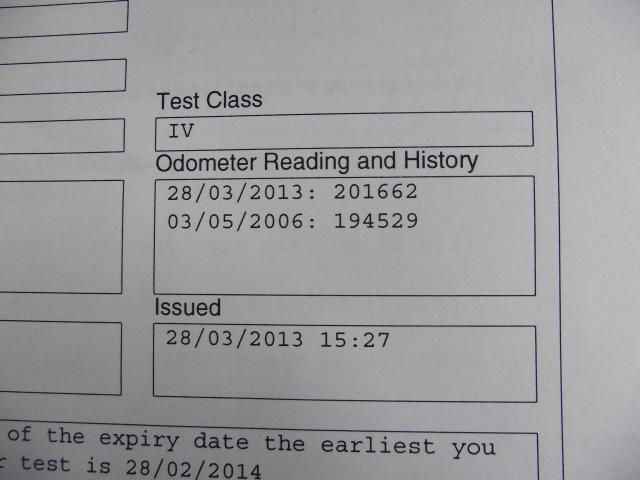 Total cost of parts required to get it through the MOT.....£11.88! Granted, I had some bits and bobs kicking around in the garage such as wishbone bushes and a spare horn, but the majority of work as just getting things working again.
I've got a bit more work to do to get it ship-shape for next week, when I need to tax it if I'm still planning to press it into service straight away. Clutch is beyond useless now, and I need to fit a replacement radiator as the current one didn't stop leaking, even with liberal applications of stop leak. Changing the clutch isn't too bad, but it requires removal of the suspension hydraulics which are mounted on the front of the gearbox, and access is made 100% better by removing the radiator, so might knock two birds out with one stone there. I've still got no nearside wing mirror, and had planned to fit a spare electric unit from a 16v I had. It would physically fit, but I wouldn't be able to adjust it inside, but that all changed last night....http://www.ebay.co.uk/itm/370210214883

I've still got to decide whether to do the cambelt or not. Could be disastrous not doing it, but then that's not the estate's way!

I love motoring when it's this cheap. And I'm loving the estate; just a quick test drive around the industrial park over the speedbumps was enough to convince me I'd done the right thing. When it's on the road, I'll film it from inside or something taking big speedhumps at 30mph. The car does not flinch at all.....some of them you don't even feel!

I've also now modified the estate. It's sporting another set of 16v alloys (its 2004 look) and I've fitted some additional dials from a 16v too. I now have a working coolant temp sensor: 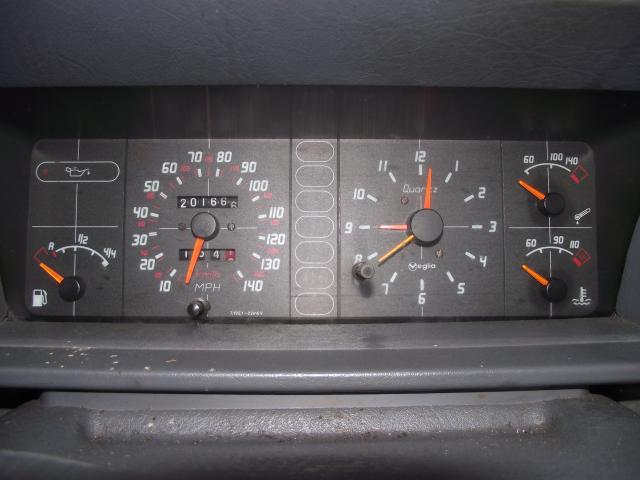 Bring on next week

For some reason having a cooling temperature gauge and still having a clock makes me laugh! You gonna wire up the oil temp. sensor?

mat_fenwick wrote:For some reason having a cooling temperature gauge and still having a clock makes me laugh! You gonna wire up the oil temp. sensor?

I probably will one day but don't need it really. Was gonna bung a rev counter in but then thought why bother? Clock's more useful....shows me how late I'm running!
CCC BX monthly column writer bloke thingy - bx@citroencarclub.org.uk 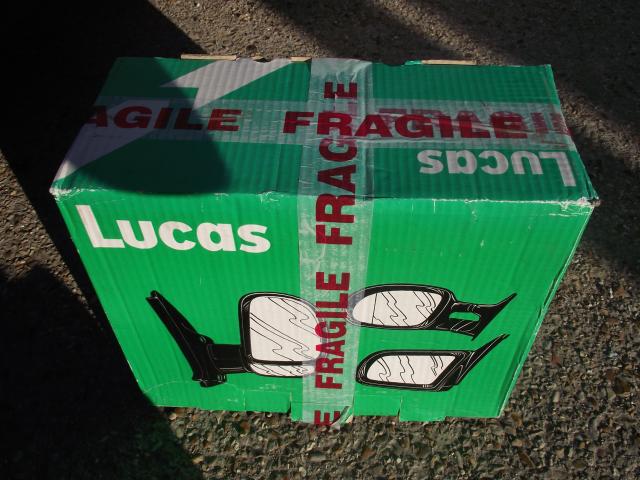 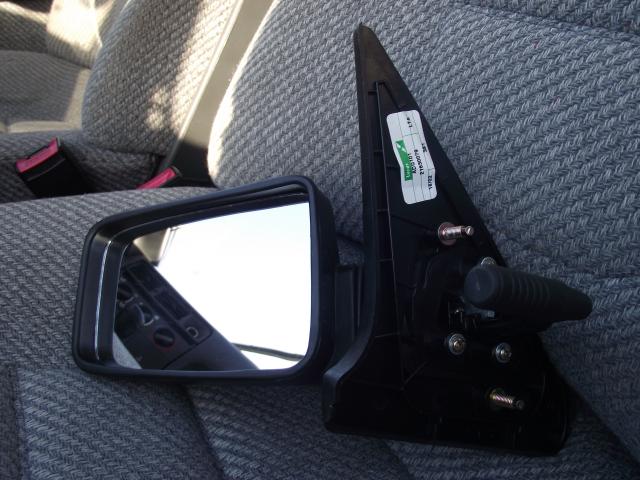 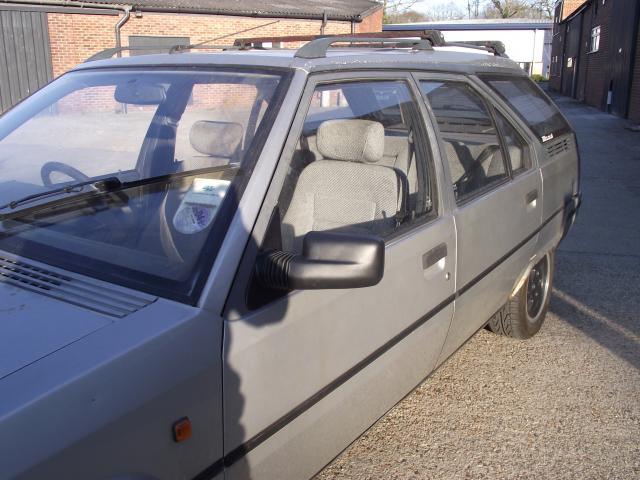 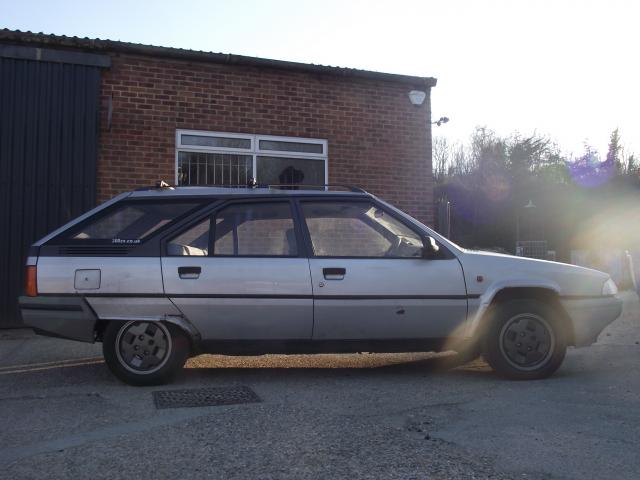 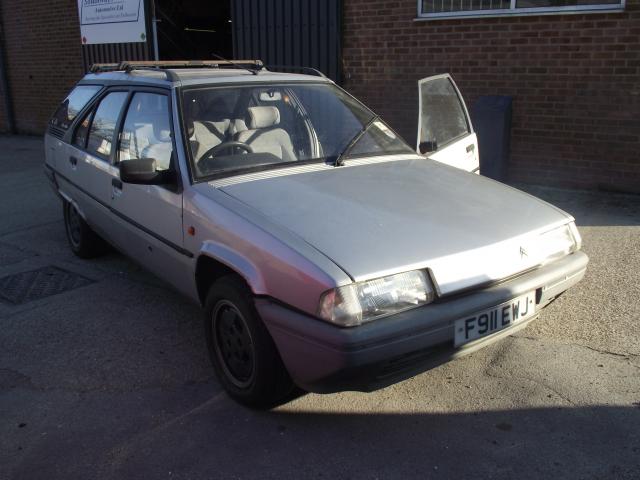 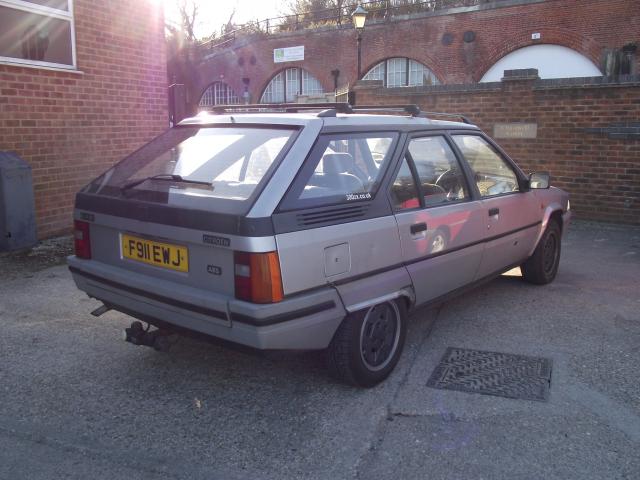 More to do though. Cambelt to be changed, as is the clutch. Luckily I've got clutch changes in BXs down to about 3 hours these days, though this one might take a wee bit longer as I'm going to have to fabricate something to replace the bent actuating rod. It needs doing though; I sold my MG 'ShedEss' last week and have no car. I need to get the estate on the road and taxed so I can use it. My other option is to tax my 16v and start using that, but really it would be better to kick the estate into daily service right away.

light travels faster than sound, thats why you look intelligent and then you spoil it all by opening your mouth !!!!!
Top
Messages: 168