Does it have ABS or is that a fib?

Are you intending to tidy up the frilly bits or run it as is.
Lots of Motors, mostly semi broken....
Top

They're off G-SEG.....it's easier than storing them (I own 3 sets of Speedlines now!)
CCC BX monthly column writer bloke thingy - bx@citroencarclub.org.uk

Tim Leech wrote:Does it have ABS or is that a fib?

Are you intending to tidy up the frilly bits or run it as is.

Fib. It used to have an Activa badge there. I'll try and get the ABS tag off for someone who needs it and put something else there.
No intention of tidying it up.....that's not the estate's way! It's a workhorse, and work it shall. Only difference this time is that it won't be abused quite as much.

Drove it home tonight....not totally legitimately I admit! Clutch is beyond knackered though (have to rev match) and I found my clock DOESN'T BLOODY WORK! Forgot how slow these things are, even one with 75bhp!!

It's smooth though, which is nice. Only baller is the NSR radius arm bearing appears to be shagged

20 odd miles covered, still running on original cambelt and clutch. Clutch is beyond a joke now - it's actually making it shit-horrible to drive!

Ride is fantastic, but hell it's slow! I seemed to remember it feeling 'perkier' than this, if not exactly brisk!

Thoughts so far....I'm not actually enjoying it, but then who would with this clutch and the worry of the cambelt about to go ping at any moment? We've had a manic week at work (again) and I can't physically fit the car in the workshop to even attempt any repairs, not to mention the lack of time I have.

We'll keep plodding on and see how we do. The car is still getting me where I want to go every day, just as it always did. It's just the enjoyment on the way is at an all-time low.....I'm a bit surprised and a bit gutted.

I'm sure it'll turn things around!

edit: My total spend has increased....I had to put fuel in it for the first time since 2007!
CCC BX monthly column writer bloke thingy - bx@citroencarclub.org.uk

citsncycles wrote:You may find it goes a bit better with some fresh go-juice in it. Although it doesn't go off as quickly as petrol seems to these days, 6 years is getting on a bit for diesel!

It kicked out 75bhp on the dyno, I'm not sure I can expect any more of it!

I think it's just me.....I'm used to much quicker stuff. Even the Picasso would eat it alive, now I've remapped it etc.
CCC BX monthly column writer bloke thingy - bx@citroencarclub.org.uk

Managed to extend the life of the clutch a little: 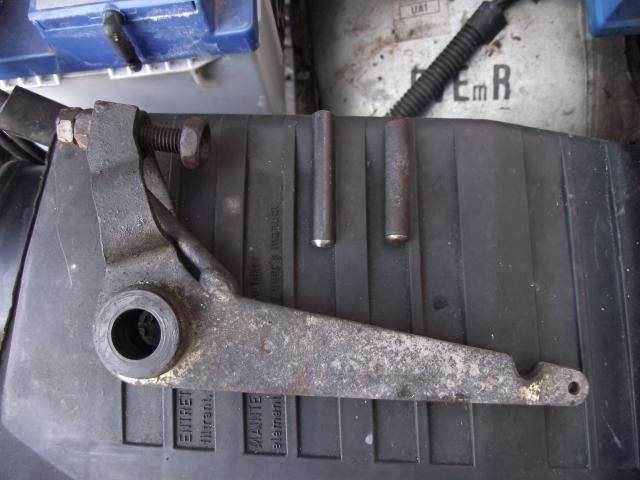 Original clutch rod pin on the right, the one I made on the left just a tiny bit longer.....just enough to produce a tiny bit of extra travel, and result........I can select gears without crunch!

That said.....well, see the for sale section.

I tried that once, the additional load ended up pushing the throw out bearing through the clutch forks with an imaginable destructive ending. But it did extend the clutch life that little bit!

Vanny wrote:I tried that once, the additional load ended up pushing the throw out bearing through the clutch forks with an imaginable destructive ending. But it did extend the clutch life that little bit!

Yeah I figured it would be a short-term thing. Mind you, you can 'feel' when the pedal is down enough by leaning against the lever slightly as you're depressing the pedal, rather than just jumping on the pedal and stressing everything out.
CCC BX monthly column writer bloke thingy - bx@citroencarclub.org.uk

Having decided that life with the Estate wasn't working out, I placed it up for sale. No takers.

It sat around in the yard at work, a running issue preventing it for being used. And that's aside from the fact the cambelt is over due, the HP belt is literally splitting up and it's running three bolts in each wheel with an odd steelie on the front because I can't get the last 16v wheel off G-SEG because it has a locking wheel bolt on. It's full of flies, it stinks and it looks more ropey each time I see it.

And yet.....through it all, a brief glimmer that the Estate was still exactly as it used to be. The estate never used to go wrong, but if it developed a small fault, bangernomics-style repair procedures could be swung into action and the issue eliminated swiftly. 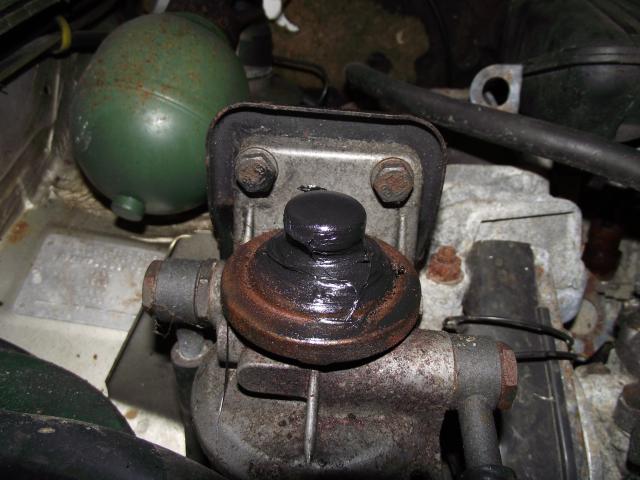 I suddenly thought "if I have an air leak on the Purflux primer, maybe it could be bad enough to prevent the car from ticking over, rather than just being tricky to start. I wonder if I could bung it up and see what happens. A blob of Sikaflex later and boom! The problem's gone! It's now running like a dream - it starts (literally) on the flick of the key and is back to it's old self.

There are more issues to sort (cambelt being one, dead bugs and stink in cabin another) but it's re-dawned on me that I pulled this car out of a barn where it had sat since 2006.
I have given it no additional maintenance. I've literally done what was required for an MoT (which equated to around £80 of costs....including the test). I've hosed it off and washed it with a broom. I haven't changed the leaky radiator, I haven't checked the oil level, let alone topped it up or changed it. I haven't given a single glance at the suspension system. I haven't changed the cambelt (it's 2 years overdue). All I've done is fitted a coolant gauge (which isn't reading anything so I guess it's out of coolant....I'll have to try the heater) and cleaned the nut shells out of the airbox.

In short, it really shouldn't be running. It's probably covered around 150miles since re-emerging from the barn and it's beginning to win me over again. Tonight, for example, I had to bring another car home which meant leaving mine in a dark, un-secured industrial park a few miles away. And yet, I'm not worried. If that was a more valuable car or one that I cared about visually, I'd be panicking like hell now!

Couple this to a potential second TVR purchase (which is really too good to refuse) I think the Estate might yet be hanging around after all. 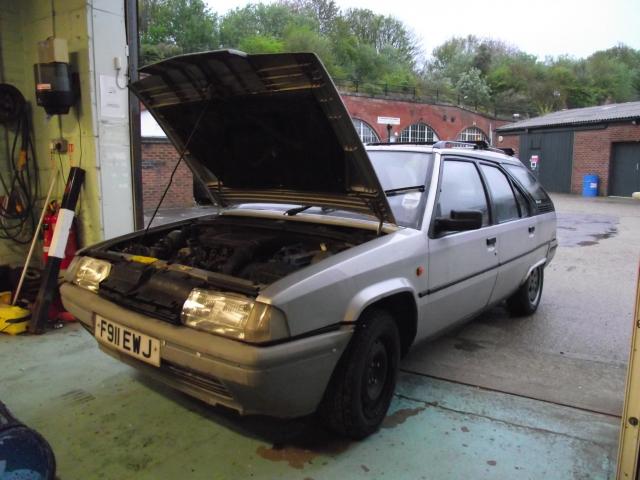 Would be good to see it get some TLC that it deserves!
Lots of Motors, mostly semi broken....
Top

Tim Leech wrote:Would be good to see it get some TLC that it deserves!

It will get TLC, but by TLC I mean a cambelt, a HP pump belt and a clutch when this one explodes.

Oh....it has got a set of GTi SMR wheels lined up though....I just need to get the tyres switched over.
CCC BX monthly column writer bloke thingy - bx@citroencarclub.org.uk

Popped a new HP pump belt on the Estate today, and with the improved suspension/steering performance I decided to give the interior a clean; it hadn't been done since 2006! 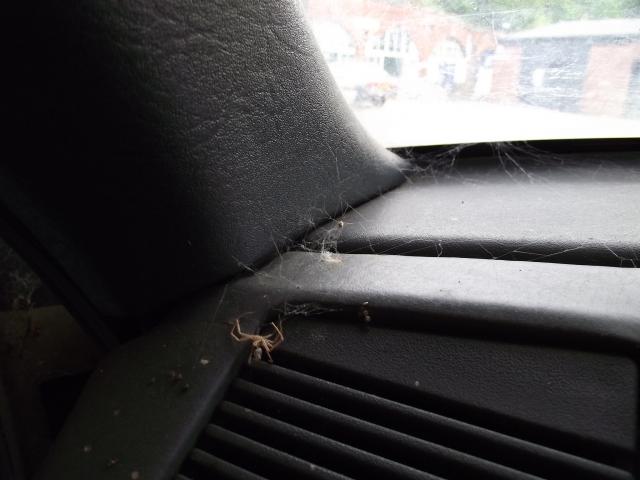 So much nicer now the mould and smell of dead things has gone! 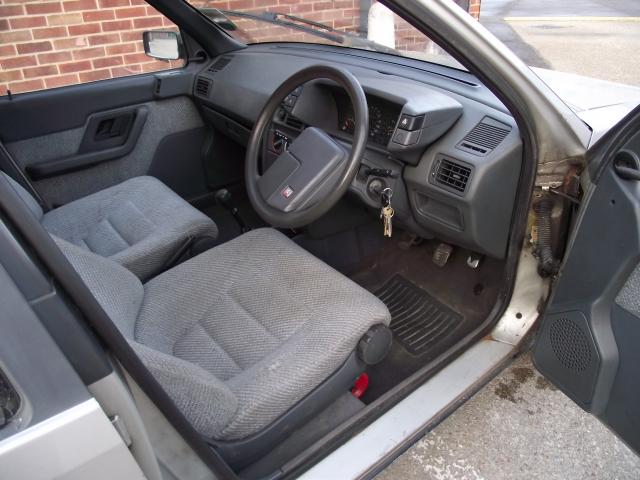 Gaffer tape still holding up. If you squint from about 30yds distance you don't notice it: 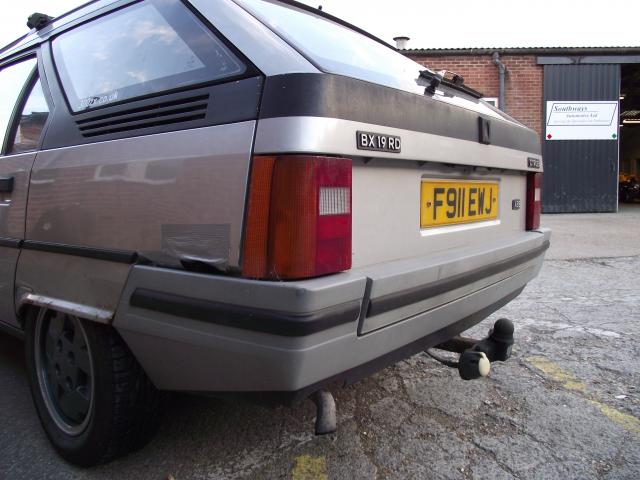 Even took it the long way home and stopped off up the road from my house to take some snaps of it (ok I was taking snaps of the IOW but I grabbed these too): 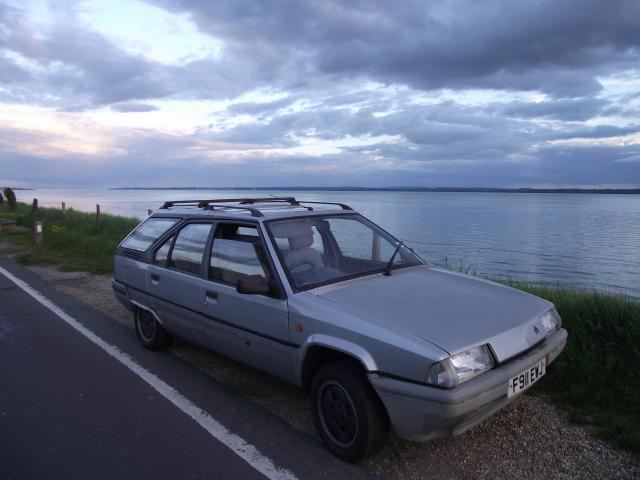 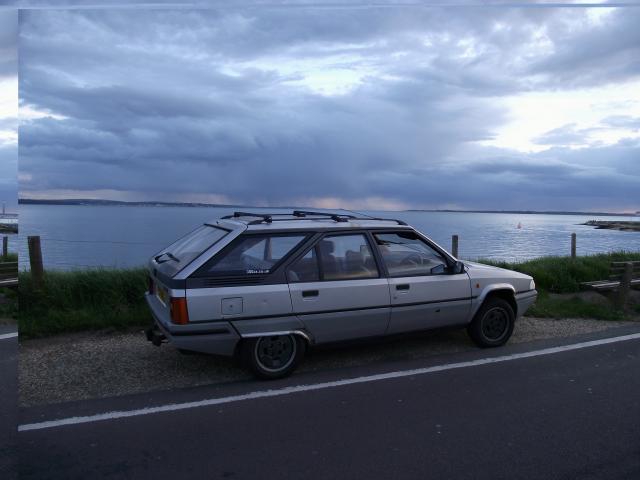 For now it's staying. It's doing me a good turn and since the initial unsettled state it's winning me over again. Ok it hasn't done great on the batch of fuel it just had (returned 38mpg) but in fairness that is ALL short journey town work. It also included a period of poor running and fuelling issues, so I'll give it the benefit of the doubt for now. I want low 40's, otherwise the next step down to a petrol just doesn't justify driving an old diesel

I am enjoying driving it though! Being an N/A diesel it's got oddly short gearing; you're into 5th at around 30mph and the power deliver is instant (what there is of it). Add the fact it floats around like a boat and glides over pretty much any surface, and it's actually beginning to feel fun again. There's a certain element of enjoyment driving around in something so old and shonky that people in cars around you seem to be giving the vibe that they'll give you a wide berth, as you probably won't care if you hit something. I should take it to India!

I'll take it to one of the shows this year instead first though.

Cambelt next, along with fitting the replacement radiator I have and popping a new thermostat in there, as I suspect the current one is jammed open.
CCC BX monthly column writer bloke thingy - bx@citroencarclub.org.uk

Good stuff, its definatly a survivor, and the once "everywhere" 19RD's are thin on the ground (I wont mention rarity of course) so its nice to this one coming along.
Lots of Motors, mostly semi broken....
Top

If the gearing was any longer, it would i guess be extremely slooooooow. I personally think the N/A is a much better short journey car than the Turbo's purely because the gearing is much shorter so you can pootle along in 5th doing 30, you'd be in 4th gear with a turbo. I'm surprised the economy is that shit, are you booting it everywhere? I manged 54mpg with my last tankful