MULLEY wrote:If the gearing was any longer, it would i guess be extremely slooooooow. I personally think the N/A is a much better short journey car than the Turbo's purely because the gearing is much shorter so you can pootle along in 5th doing 30, you'd be in 4th gear with a turbo. I'm surprised the economy is that shit, are you booting it everywhere? I manged 54mpg with my last tankful

I reckon taller gearing would prevent it accelerating at all!

40mpg might not sound great, but remember that was ALL short, cold journeys and urban driving mainly. Plus I had the fuelling issues to sort out so there was a fair bit of full throttle trying to start the car every day!

Hoping that it'll end up around 45mpg. I keep hearing everyone's 50+ mpg claims and to be honest I've never got anything like that from an XUD aside from the odd long trip in this car way back in 2004/2005. It could be my driving, but then I often hit 32/33mpg in the 16v in mixed driving, which is pretty good going.

We'll have to wait and see.

4-5 at most.
The national BX register - click to submit a car!

I've been getting 48mpg out of Timex, although I have managed to get that down to 40 at times!

I'm hoping for at least as good with the replacement head on, but I'll save that for my own blog.

My first 19RD would get up to the low 50's, but that was normally on a long trip without pushing it.

My estate has a boot full (literally) full of old car mags. It's pretty well loaded!
The national BX register - click to submit a car!

So where are the updates then Kitch?

Its had at least a trip to stratty, any pics

Stinkwheel wrote:So where are the updates then Kitch?

Its had at least a trip to stratty, any pics

Your wish is my command....

This is lifted from a Pistonheads thread the other day. I'm especially proud of my extreme Citroen-owner stereotyping

Well it's reached a milestone....the tax expires Monday, which means The Estate has been on the road for 6 months.

So, that's 6.5 years in a damp barn, almost untouched with no-preventative maintenance whatsoever (other than shutting the windows), to hauling itself out again, to passing an MoT for £84.00 (total cost) and then providing six months of largely (99.5%) trouble-free service.

It's about to click over to 203,000 miles, which in BX terms is actually not all that amazing; I know of two for sale, one with 260k and another with 310k, so legend-status isn't quite there on the mileage front. 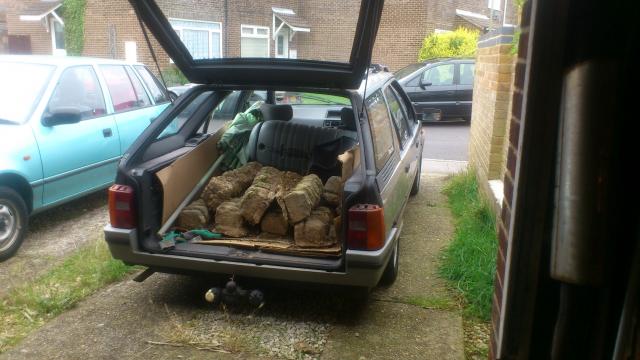 Each of those slabs weighs (I would guess) 40-50kg (there's ALOT of concrete on the bottom of them). It proved helpful during some 'improvements' I was subjecting my garden to! And when those slabs had gone, it was filled with (I'm guessing) around 200kg of top soil too. Suspension might have been a bit slow to lift 350odd kg of rockery, but it did lift it, and it didn't complain (aside from needing a few revs to raise the back end up!)

Part of me wishes I'd never cleaned it after it came out of the barn, but I'm a homeowner, and it's not in my interests to devalue my entire street by parking the estate in it complete with vine growing up the door and remnants of dead woodland creatures.

In the (admittedly) piffling mileage I have covered, it's averaged 45mpg overall. In fact, around town it seems to be better than on the motorway - the opposite of most cars. It's probably down to really short gearing (for a diesel) and a lack of power, meaning 80mph + on the motorway is a flat-out affair as soon as you start to climb hills.
Speaking of motorway runs, I did treat it to a roadtrip at the beginning of September - I took it to a Citroen meet in Stratford. The meet turned out to be rubbish, frankly, but on the social side it was quite good. You've never been to a Citroen meet ( well you you haven't, have you?) but as the models are so diverse the owners tend to be too. 2CV = hippies and extreme liberals. SM = slightly snobby. DS = old. CX = halfway bewteen SM and DS. XM & Xantia = techno-freaks. And the BX? Well there's a cross-dresser and some people who are DEFINITELY 40yr old + virgins, but most of all, there are ale-drinking, welder wielding, chain smoking types who stay up in the campsite til 3:00 talking loudly about hydraulics, trains and buses, and who say fuck. Alot.
Anyway, I took the estate there instead of my 16v, partly because I was being cheap, but mainly because I thought the old girl deserved it. On the run there (Fareham to Stratford), 48mpg and approx 2.5 hours.
The run back? Left at 8pm on the dot. Walked back in through my front door at 9:55pm, which included sitting behind a police car all along my stretch of M3 and M27 motorways. Straford to Winchester (excepting Botley/Oxford on the A34).....flat out (literally) all the way. To think one of my most memorable runs was in one of the slowest cars I've ever owned! But, as always, it just adds to the character....though I did only manage 33mpg!

So how's the car getting on now? Much the same as before, really. Clutch is still on the rivets (probably), and one of the NOS suspension bushes I fitted for the MoT seems to have fallen apart, because there is a knock so bad coming from the OSF suspension it's affecting the steering! 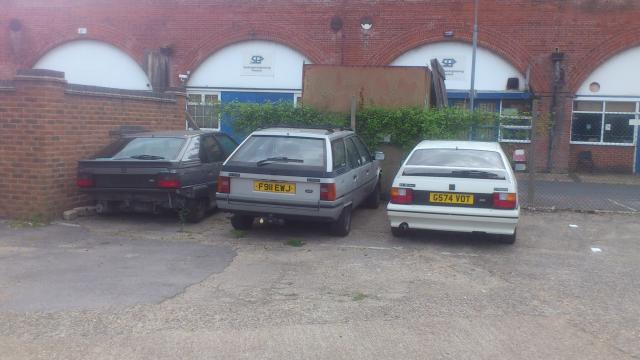 It's going to have a break in October; I have three cars (excluding the wife's) currently taxed and on the road, and to be fair I don't need that many. So for October, I'm sitting the estate out and running my red 16v BX instead: 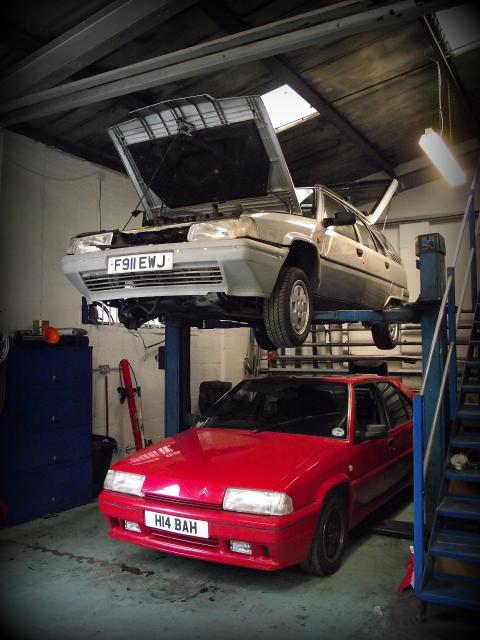 I'll be getting that ready for the NEC in November as it's on a BX stand (they didn't want the estate....shocking!) and I'm also having too much fun driving my little TVR S1 around on the rare occasions I actually get the thing out of the garage. So for October the estate has a break (and the suspension bush replaced....again) and come November it'll go back on the road when the TVR comes off it for a strip down (I might do a blog on that in a mo). The red 16v (which also runs out of tax end of Oct) will only go on the road for November, and I'll cash the tax in as soon as the NEC is passed.

That means the estate is my sole transport for the cold winter months. I might give it a lick of underseal beforehand! But for now, it's passed the 6 month check with flying colours. It's still running as well as it ever has, and shows no signs of giving up. I just wish I could add more miles onto it....maybe I should lend it out to PHers around the UK who could take it to interesting places and do interesting things in it, taking pics along the way. Like a chain letter, only a car
The national BX register - click to submit a car!

In fact....if any BXers want to borrow it free of charge on the condition they take it somewhere interesting, let me know!
The national BX register - click to submit a car!

I recognise the grey one too...

I would offer to borrow it, but you know me I would spoil it by cleaning etc.

Tim Leech wrote:I recognise the grey one too...

I would offer to borrow it, but you know me I would spoil it by cleaning etc.

I doubt the Xantia boys would take kindly to being techno-freaks although they do like to play with the Lexia's in public!I own a Xantia....but it doesnt work.

They are techno-freaks....anyone who brings a diagnostic machine to a car meet is a techno-freak. Likewise anyone who knows how the SCCAR system works.

None of it's meant in a negative way, it's just joking around. In honesty, the type of people who own the cars are more diverse than the cars themselves. Most are normal.

And then there's Doc.....
The national BX register - click to submit a car!

Oh and yes, that is the grey one. It's moved round the corner now and is going to be coming indoors soon for.......well I'll put a curtain up!

The pink one is where that one is in the picture now, and the pink one's fate isn't sealed just yet.
The national BX register - click to submit a car!

And the 310k mile estate you mention isnt for sale anymore, ive decided to keep it, although i am using the spritely 165k n/a estate at the moment

And the 310k mile estate you mention isnt for sale anymore, ive decided to keep it, although i am using the spritely 165k n/a estate at the moment

Ah good, then I can pretend it doesn't exist anymore and consequently 203k miles looks a bit more manly again