Tell us about life with your BX, or indeed life in general!
Messages: 86

Might also be worth taking the injectors out and cleaning with carb cleaner. Does not take a lot of drying out on small apertures injectors (or carbs) to cause a mixture problem. A couple of months standing still can do it.
I've assumed the air inlet side is clear - no insect nests or similar?

On the Hydraulics, if you don't know how old the oil is, I always assume a complete drain and refill with new LHM will be necessary. You won't really find much out about the rest of the system, til that's done. Leaks are obvious and so are hard (knackered) spheres, but changing the oil and bleeding properly will tell you more about the PAS and brakes, though you will need to bleed all 4 brakes to get fresh LHM down the tubes for best effect.


TPS available, not sure if correct for model though.

djoptix wrote:Yes, I think so, there's something on the TB anyway...

Sounds like classic TPS symptoms to me. If you hunt them down, there will be a table somewhere on the net giving you the correct resistances across different throttle positions, so you can measure it with a MM and see if it's working right.
CCC BX monthly column writer bloke thingy - bx@citroencarclub.org.uk

Kitch and Tinkley, thank you. I think probably all that you say is correct and I need to do a complete Hydraflush (I'll do this as soon as I can get it to run). I will have a look at the TPS too and order that one if appropriate - can't do any harm. However I've discovered a more fundamental issue with the fuelling...

The seller mentioned that there must be a fuel leak somewhere as there was a petrol-y smell after cranking. I'd noticed it myself but hadn't been able to find the source. The day before yesterday I splashed out on 5 litres of finest Optimax and put it in, after which it ran for a bit but then stopped again (it was pissing it down that day - this will become important later - you can probably guess why). After this I did my first round of checking ignition things - replaced plugs, checked that HT leads were all secure, etc. Still no joy.

Yesterday night I had another look at it and took off the fuel supply line at the injector rail. There was pressure (it spat petrol all over me when I removed it) but then running the fuel pump on the key produced very little fuel. I'd turned it round on the drive; I wondered if the 5 litres of finest Optimax had simply run down to the other end of the tank, away from the pickup, and all it needed was more fuel. Today I went and splashed out on 5 litres of finest BP Ultimate, put it in, cranked, cranked, cranked... nothing yet. I wondered if there was an airlock in the fuel line. I decided to disconnect the supply and run it into a jar to see if it was dispensing fuel.

As I got out of the car I could smell petrol again. Which led me to this... (sand added before photo taken) 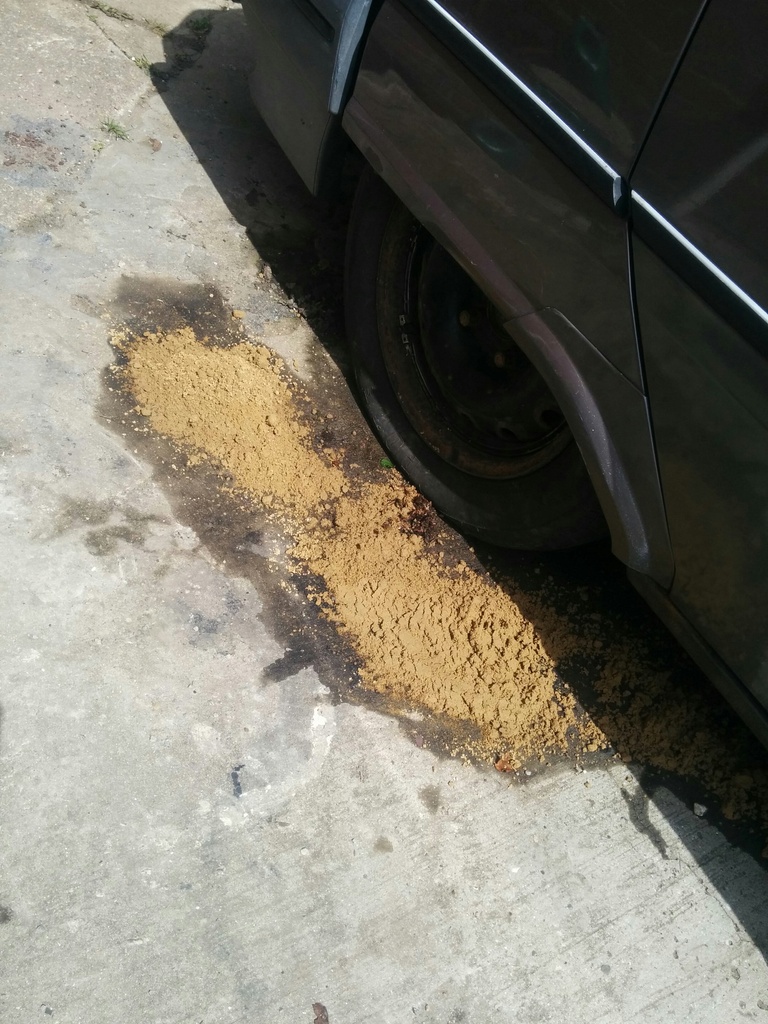 Flaps. That looks awfully like 5 litres of finest BP Ultimate urinating onto the floor. A look underneath; yep. Rivers of petrol running off the tank. Crap!

* hole in tank. Most likely. Rough running and not running under load simply a result of no fuel.
* hole in return line. Hopefully! Replace return line, job done.
* hole in supply line. Unlikely, because there wouldn't be pressure at the fuel rail if this were the case.

I reasoned that since all the petrol was running out onto the floor, I might as well check the operation of the fuel pump by running the supply line at the rail into a jar as before. I did this and repeatedly turned the key to make the fuel pump run. Which produced this... 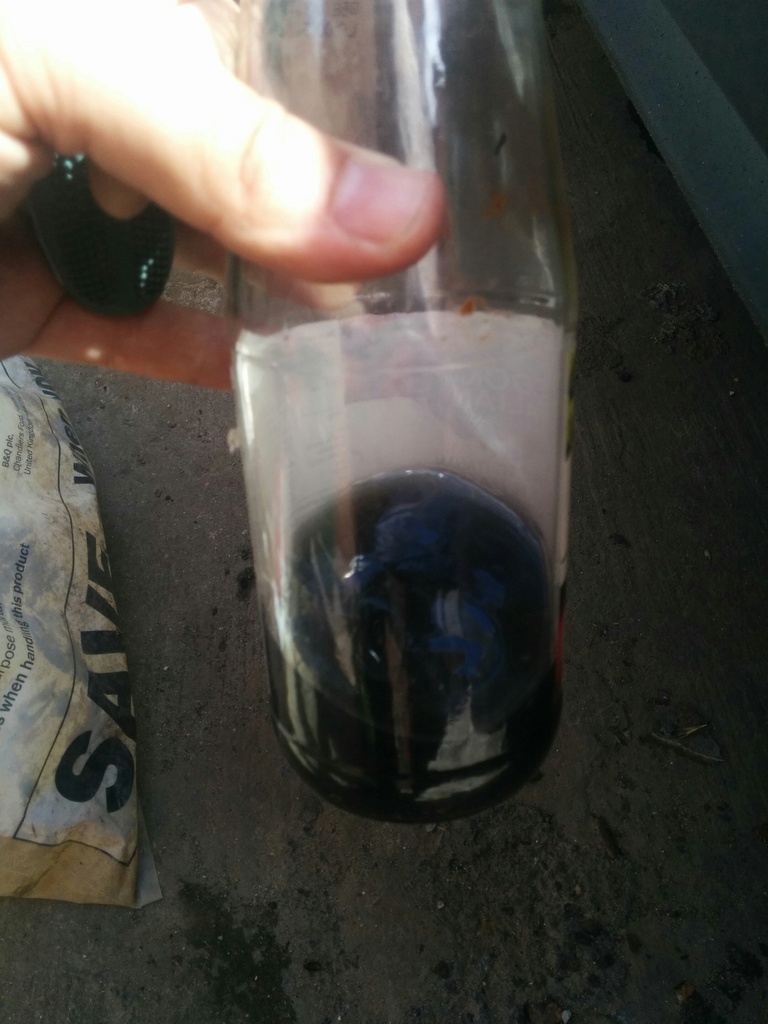 It looks awfully like the engine is expecting lovely 97 octane fuel but is instead getting Horrible Black Soup. No wonder it wouldn't run happily! Where the hell has this come from? Just deposits in the bottom of the tank?

Anyway, my conclusions from this episode:

* I'm going to have to replace all the fuel lines, the filter, and possibly the tank. So much for this being a quick and easy recondition-a-few-bits-and-get-an-MOT project.
* I've got the feeling this car is going to fight me every step of the way!
Good heavens! My signature's been moderated...
Top

BX's are known for rusty fuel lines so lets hope its one of those first!
Lots of Motors, mostly semi broken....
Top

I had to change the steel fuel pipes last year and I think they'd just started to pinhole, judging from faint petrol whiff when parked and cold. P Chidlow did the same on his diesel (mine's petrol) as well. Seems more and/or age or mileage thing. Certainly safer to do it. Chevronics have new fuel pipes, which btw are same for diesel and petrol and probably 16v too.

I'm sure the tank will be OK, though extracting it might be fun.....

Tinkley wrote:which btw are same for diesel and petrol and probably 16v too.

For the valver, the fuel tank end of the pipe usually needs trimming to fit, needs around 2 inches removing. Its pretty obvious when its on as the pipe hangs too low.

OK, I'll take a look after the weekend when I'm home.

Vanny, did you get to using that back box you had from me a while ago?
Good heavens! My signature's been moderated...
Top

Something doesn't quite add up here. The tank is full of crud and its leaking fuel. Tank damage should be easy to spot although crud gets in usually via the many hoses for the breather or fuel filling or the metal fuel filler pipe in the rear wheel arch area so have a good look there too.
If it ain't that then the return line is the next suspect (for the previously mentioned reason). There are inspection covers under the rear seat for examination and replacement but I reckon the tank needs to come out for a good clean out.

The fuel filter should be protecting the pump and injectors from any muck. I would stick a new one in ASAP in case its useful life has expired. When its all done you might want to get the injectors checked and cleaned too.
The Joy of BX with just one Citroën BX to my name now. Will I sing Bye Bye to my GTI or will it be Till death us do part.
Top

djoptix wrote:Vanny, did you get to using that back box you had from me a while ago?

It went on within the week i collected and has been on the car for well over three years!

Fortunately none of the 3 Bx I've owned have had cruddy fuel tanks. I've looked in them after removing the sender, and shone a torch in there. A very very small amount of debris, but that's all and you would be running dry and then some to get that in the fuel line. I realise you have the fuel pump in the tank but even that must be a few mm off the bottom to avoid blockage. Also as Jaba says, the fuel filter should trap anything tha escapes into the feed.

It may be possible to clean the tank in situ, but it is an awkward shape to run your hand around from the two hatches. Maybe someone filled it with diesel? and it never got cleaned out properly....

Having had a bit more time to think about it, my main concern is that the fuel is seemingly able to leak out under gravity alone. Since the pickup pipes exit the tank at the top, this means it has to be a tank leak...?

I won't know for sure until I can get it up on axle stands and get underneath.
Good heavens! My signature's been moderated...
Top

djoptix wrote:Since the pickup pipes exit the tank at the top, this means it has to be a tank leak...?

Or its got a good hydraulic seal and is syphoning from the tank pickup?

^ that would be good, let's see...
Good heavens! My signature's been moderated...
Top

Back from work now, so I treated myself to half an hour rolling around under the car and stinking of petrol.

Bad news: the tank is holed. Good news: it's holed in a very accessible and easy-to-see place, so I can attempt an epoxy repair before thinking about dropping the tank off (but if it comes to that I will probably scrap it, frankly). 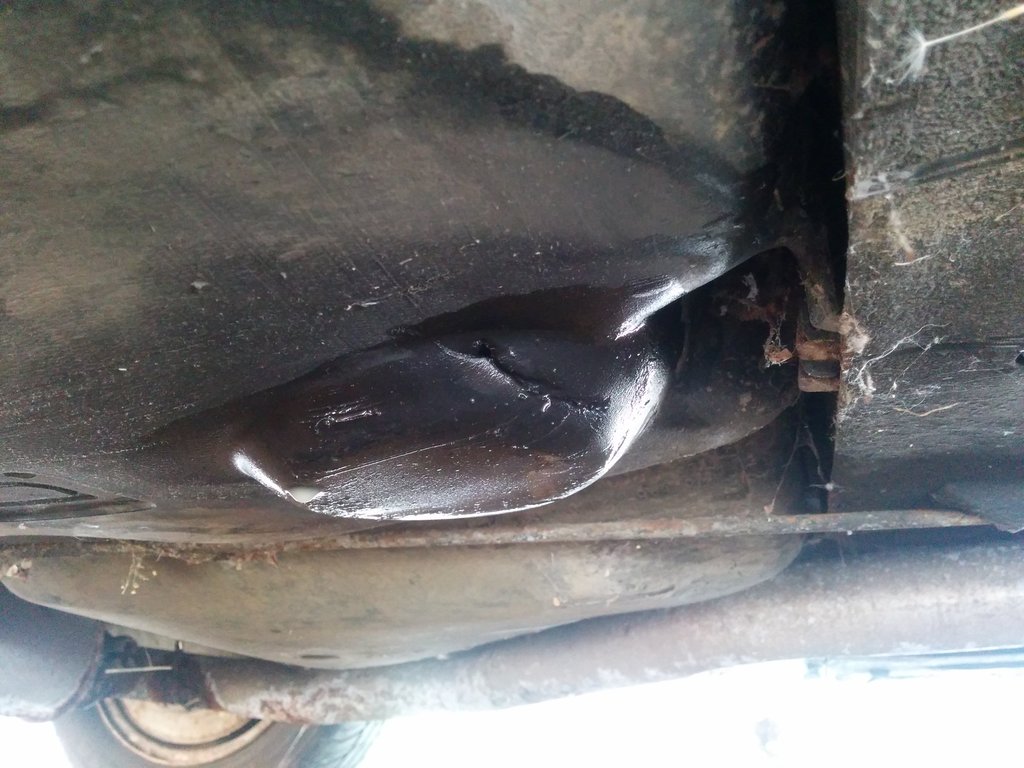 It's in the depression below the pump pickup. Presumably it has just grounded and been ripped by something. I'm going to order some epoxy (I've used JB Weld before, but does anyone have any better suggestions?) and see about taking off the pump pickup and thoroughly siphoning and cleaning the tank at the same time.
Good heavens! My signature's been moderated...
Top
Messages: 86