Don't really do names for cars, but the name Pigeon or 'Pidge' for short has stuck for some reason.... 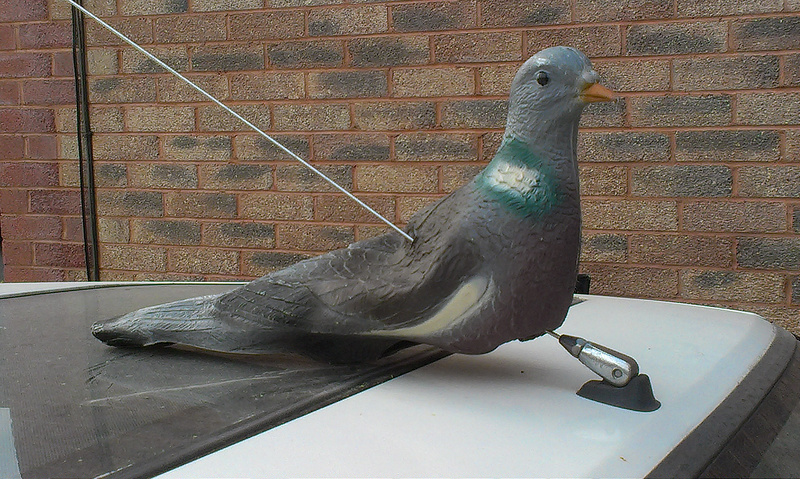 having been affiliated with the BX for nearly 2 years

Having bought this off Jay to replace my pink tired and rusty (if not trusty) TZD, it was at one point close to being scrapped mostly due to Jay's location down in deepest Cornwall, but having already seen the car in the flesh, I knew already she was a goodun.

Having been under the front end, I'm really impressed and pleased with how good she looks. Not a lot of rust and certainly nothing major.

The first job was to replace the head and inspect the front end for rust. I ommitted to take photo's with the head off but it's nice to see the bore honing marks still on a 23 year old car!

This is the new head on, all tightened up with manifolds and turbo. Am awaiting new tensioner and idler roller before fitment of new crisply ironed cambelt. 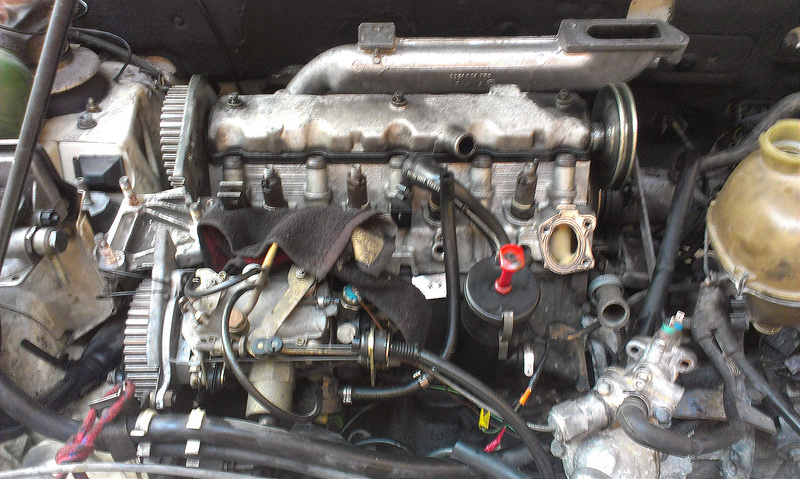 I've fitted a GT1549 turbo, as fitted to xud9te's and xud11te's. In theory, this will make for a slow spooling turbo on a 1.7, but, the turbine is smaller than the standard T2, hopefully leading to a faster spool up. The shaft diameter is 1mm (or there abouts) reduced than the T2 and the compressor is bigger. My hunch (not knowing an awful lot) is that both spool up time (in the rev range) will be lower (i.e. quicker) but with increased flow on the compressor side.

For time being I'll be using the lucas injection pump, which means (as far as I know) there is little I can do to match/improve the fuel requirements under boost. However, I know the Bosch pump is so versatile and easily tuned that I'll see good improvements in 'transient response' and hopefully performance.

In any case, it is always interesting to have theories and estimations about these things and then try it for real.

Front end rust: Not very much of it, although it has been cleaned up ready for BILT HAMBER - DEOX-GEL and BILT HAMBER DYNAX-S50 (sorry for caps - copy and paste job) 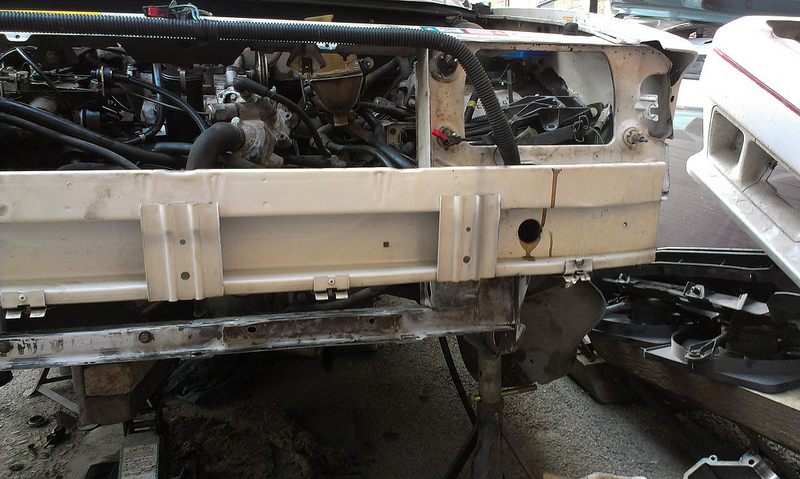 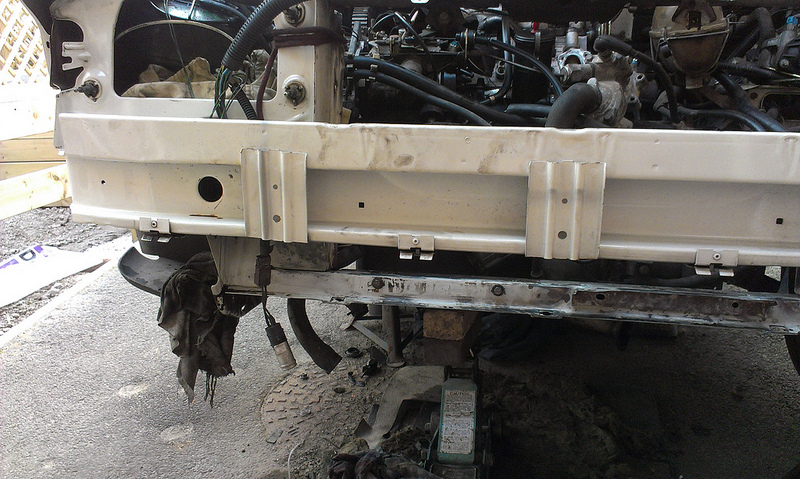 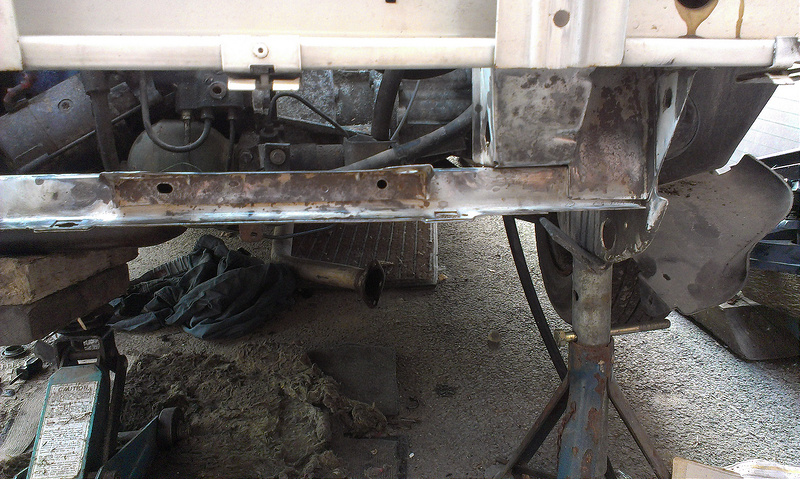 Inner Wing rust - previously treated with body sealant of some sort to keep it at bay, but it wont be long before it needs welding up. Not too bad though. 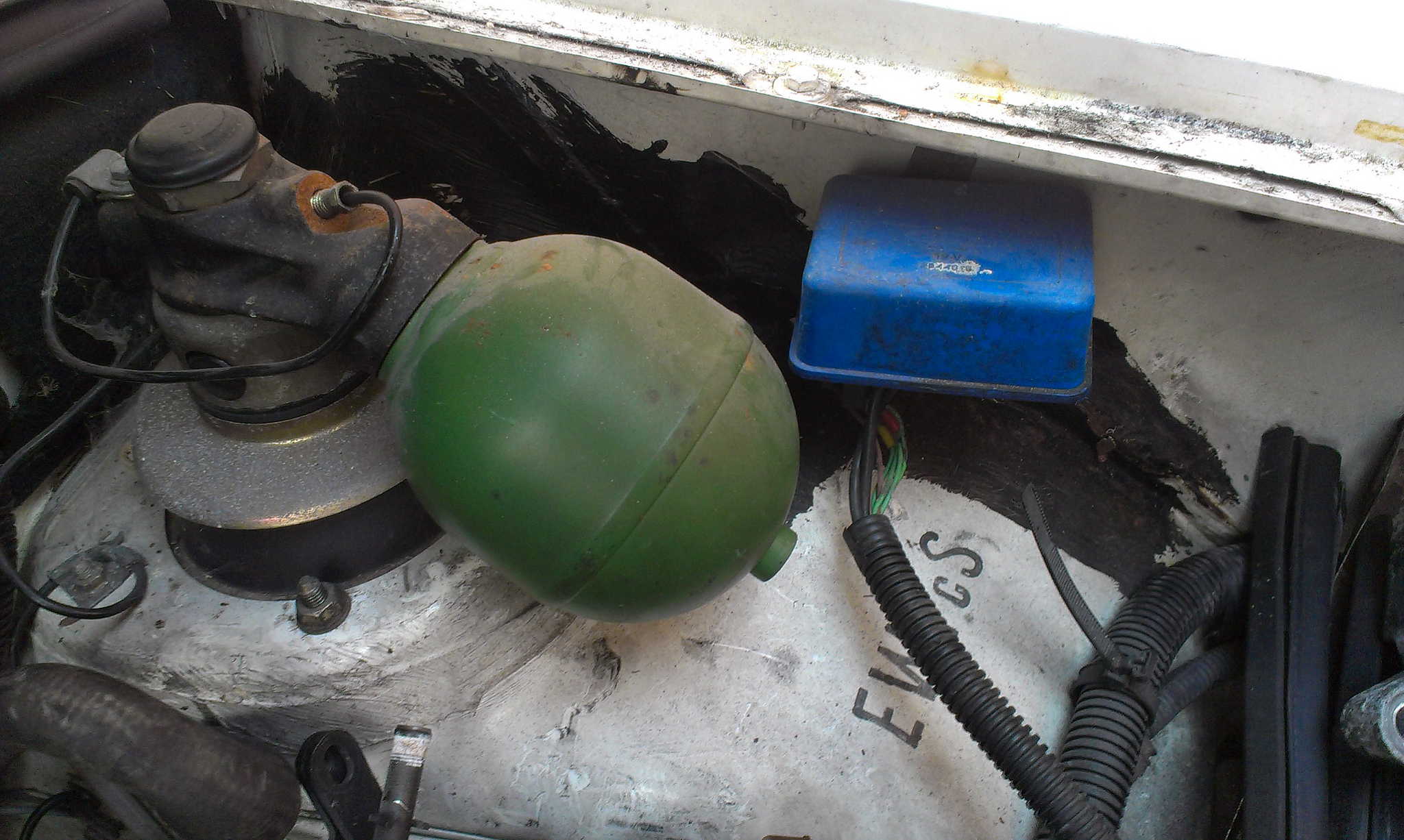 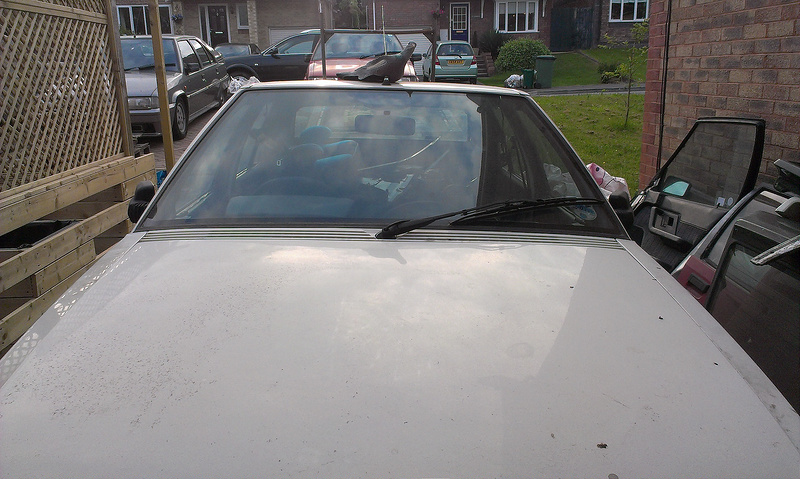 More pics to come, MOT hopefully this week unless I decide that inner wing rust is a failure.

Future plans are to fit mk1 wings, install the A/C from the TZD and up the TGD to TZD spec.
Fit 16v rear anti roll bar
16v vented discs on the front
Revised gearing
Picasso Drive shafts
Auto dipping-near-side-door-mirror-when-selecting-reverse
Possibly then will be a conversion to a 2.1 but we'll have to see about that one!
Last edited by BX Bandit on Mon Jun 10, 2013 8:38 pm, edited 1 time in total.
1990 BX 16V Platinum Grey
1990 BX TGD White
1960 Morris Minor Clarondon Grey
1971 Triumph 2000 Auto Valencia Blue
Top

I think the neighbour has realised he can't do anything (except apply for a reduction in his council tax - seriously, he did)

When I scrapped the XM, I went over to him and said

Me:"......FYI It'll be gone in about 2 weeks......"
Me:"....For what accolade to I deserve to be called an arsehole?"
Prat:"First thing that came into my head..."
Slight pause as I absorb above statement
Prat: "But I won't aplologise for it"
Me:"You won't? Really?"
Prat:"No"
Me:" Well that gives me the right to say anything or call you anything I want then doesn't it?"
Prat:"You can't go round calling me names and saying stuff about me"
Me: Walks away thinking 'I own you bitch!'

I forgot to mention that I have a Hurricane look alike kit, so the car will essentially be a white Hurricane but with 16v bumpers and mk 1 wings.
Might take a while to complete though!
1990 BX 16V Platinum Grey
1990 BX TGD White
1960 Morris Minor Clarondon Grey
1971 Triumph 2000 Auto Valencia Blue
Top

Worth noting Neil, those injectors were tested at the Bosch centre just before it came off the road and even though i'd taken them in for (and was prepared to pay for) a clean and service, the chap said after testing them "no point cleaning them, they spray as good as a new set".

So probably worth selling on, think i gave you the test reciept didn't I?
I have zero patience for your tedium.
Top

Looks like some ph1 wheels on that 16v. You know what would make it look better? Ph2!!

JayW wrote:Worth noting Neil, those injectors were tested at the Bosch centre just before it came off the road and even though i'd taken them in for (and was prepared to pay for) a clean and service, the chap said after testing them "no point cleaning them, they spray as good as a new set".

So probably worth selling on, think i gave you the test reciept didn't I?

You did mate yes but that's what I've just put into the donor head which came with 1.9td lucas injectors. I assume they are different but tbh even if they aren't, I wanted to put yours in after what you said about them. Eventually I shall switch to Bosch though.

Rain has somewhat spoiled my fun but I managed to get some rust proofing done on the front end. It's two applications of the deox gel, but I still have rust - although much of it has gone. I'm quite impressed with the stuff. Any one else used it? Bilt Hamber Deox Gel?

Matt, did you have to do several applications or did you just leave it on for ages?

I've used the deox gel on my Zx along with hydrate 80 and dynax s50 for the cavities and I've also got some dynax uc (semi-clear) to try out . I have been very happy with all the bilt hamber stuff that I have used .

Sorry Bandit, i misread your earlier post and thought you'd just fitted the 1.9 ones.

Fairly sure they're the same anyway. But always good to have a known-good set.
I have zero patience for your tedium.
Top

bxzx16v wrote:I've used the deox gel on my Zx along with hydrate 80 and dynax s50 for the cavities and I've also got some dynax uc (semi-clear) to try out . I have been very happy with all the bilt hamber stuff that I have used .

How many times did you have to repeat the deox gel process, allowing say up to two hours per application?

Exactly Jay, the donor engine was full of water so gawd know what state other things were in. As it happens the donor block was too far corroded so not much use, but the head was serviceable (I hope anyway). At this stage, I need a reliable runner, which head issues aside I know yours was.

I'm still amazed how good the TGD is underneath (well, all round really). An honest low miler and I think she may of been garaged too....?

When I saw the title I thought you're being a bit harsh about your welding!

With the Deox gel, I left it overnight in a layer thick enough not to dry out, then either agitated it the next day or applied more until it had gone. Washing away with water every so often. Generally it was only the bottoms of the rust pits which still had some left after the first application - most of it had gone.

My understanding is that it turns the rust into a water soluble, non adherent substance, and certainly the rust as such seems to disappear straight away. But the black stuff remaining in the bottom of the pits, I wanted to makes sure had also gone before I applied paint, in case that was hiding any untreated rust.

It does make sense mate. Although the stuff isn't too expensive for a litre tub it soon get used up!
So in the end, you managed to get rid of the black pits? I must say I'm really impressed with the stuff and rekon it's my new favourite substance!
1990 BX 16V Platinum Grey
1990 BX TGD White
1960 Morris Minor Clarondon Grey
1971 Triumph 2000 Auto Valencia Blue
Top

Yes, in the end. I reckon it took around a week to get it all shiny, but I put the long time down to the low ambient temperatures as I was working with it in winter. I couldn't really manage the cling film trick to stop it drying out, as wherever I touched the cling film the layer of gel was bugger all. But it really does need a decent thickness otherwise I assume all the gel is 'used up' working on the rust and once that happens the process stops. I would leave the dried gel on the areas which had turned shiny (to protect them from the air) and only apply new gel on the pits. That way the tub lasts longer.