What happening regarding the working/cut away strut?
Lots of Motors, mostly semi broken....
Top

I will be there Thursday , Friday ,Saturday , Sunday .

My daughter will be with me Thursday to lend a hand and give me a lift home.
Saturday I will be there but hope to spend more time checking out the rest of the show with my dad.

I'm sitting here with Paul and Tim and some bits of paper, as a result of which calculations we have realised that we will have space for 6 cars. Step up Graeme with that stellar Mark 1 GT - which was on the reserve list as having had the next highest number of votes. We have a fantastic line up.

Exhibitors: please can you write some blurb to put in the windows of the cars and e-mail to Paul296. One side of A4 max (500 words max): a few lines about the model itself, and some of the car's history - particularly the time it's spent in your ownership of course. PM Paul if you'd like to see what he's written about the Hurricane to get your inspiration going. Don't worry about spelling etc, we can fix that, the story's the important bit

We're still waiting for stand passes. Non-exhibitors - time is running out to put your hand up for stand volunteering and free passes! - please post here when you plan to attend and we'll work out what we got - thanks. Those who have asked for extras: until we know who is going to be there on what days I can't make any guarantees.
Diagonally parked in a parallel universe
1991 TZD hatch (Triton Green)
1992 Hurricane
Top

Great news about getting a mk1 on the stand

I wasn't fussed which one, as long as there was a mk1 of some sort!

I think it's important we have the blurb going in the windows uniform in some way, so same headers & footers, same font & layout etc. Maybe post up a link of what Paul's got so we can all get ours looking the same?

Being that we haven't got leccy, I can't do the laptop running vids over and over idea, but I'll copy a couple of pages from the brochures I've got and bung them in the windows for people to read....not sure if anyone will be arsed to read things in the window, but if it's there then if they want to, they can

Kitch wrote: I think it's important we have the blurb going in the windows uniform in some way, so same headers & footers, same font & layout etc. Maybe post up a link of what Paul's got so we can all get ours looking the same?

). If folks PM their wit and wisdom to me I can print it off and collage it together with the images and then get it laminated - then we'll present (something like) a united corporate front. 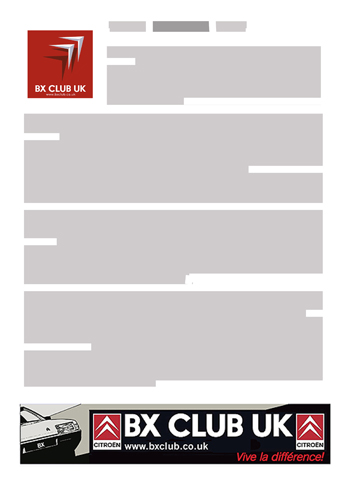 This car is a 1992 Citroen BX 17 TZD Hurricane, and of the 250 sold in the UK is one of 13 still remaining on the road. The Hurricane was a UK market specific special edition of the BX 17 TZD fitted with a phase II BX 16v style rear spoiler, along with factory Speedline alloy wheels and an ‘Etna’ velour interior unique to the model. It was only available in Triton Green Metallic paint with distinctive Hurricane badging and pin striping.

The engine is PSA’s 1769cc XUD turbo diesel rated at 90bhp and - driven sensibly – returns up to 60 mpg. Modest by today’s standards, but coupled with the engine’s comparative refinement and Citroen’s famous hydropneumatic suspension it made the BX turbo diesels -and particularly the TZD - the best selling diesel cars of their era. Even today this particular car, with a respectable 187,000 miles under its belt, still turns in a very creditable performance. The model was also available in the UK as a GTi 8v powered by a 1905cc fuel injected petrol engine, while a similarly specified turbo diesel model was available in France badged as the ‘Ourane’.

I bought the car in 2011 after a previous Hurricane, that I had bought to restore, was written off. Although at the time the car had a blown head-gasket and gearbox, the engine and gearbox from the previous car came to the rescue and J899 NCK was back on the road narrowly escaping a journey over the weighbridge: the engine incidentally has covered 10k miles less than the rest of the car. I’m the fourth owner, and although the car seems to have been very well cared for throughout most of it’s life, it had been languishing in a back garden being used as a shed, until it was rescued by a friend of mine who subsequently sold the car to me.

Until 18 months ago it was used as my everyday transport, but now takes turns on the road with my normally aspirated BX 17 TGD and is SORN’d for 6 months of the year. The car has been meticulously maintained throughout my ownership and has been exceptionally reliable. It is a regular presence at Citroen Car Club rallies up and down the country and last year made a return trip to Paris where it attended the BX’s 30th anniversary celebrations at the Citroen Conservatoire in Aulnay. Although at 22 years of age and more than a decade beyond the manufacturers predicted life, I’m hoping it will be giving me many more years of faithful service and pleasurable motoring.'

If we have the blurbs electronically we can sort formatting so they look consistent - don't worry about that, just send us the words

Incidentally - does anyone know where the third BXC banner is? Mark has one, Mike has one but the other one is currently unaccounted for - any information leading to its arrest gratefully received.
Top

Paul296 wrote:Incidentally - does anyone know where the third BXC banner is? Mark has one, Mike has one but the other one is currently unaccounted for - any information leading to its arrest gratefully received.


To elaborate on that more, there is two standard BX Club banners and one 30th Anniversary one.
Lots of Motors, mostly semi broken....
Top

Sent my submission! I'd actually written it a while back when I was planning to be at the Bristol show...

Paul - can I suggest pulling some of the info out into bullet points? You really need to cater for the 'quick glance' brigade. Stuff like power, economy, length of ownership, then the detailed stuff below that for those who like to linger and read it all.

We did have an idea at one stage to make super-size milometers to go on the roof of each car. Apt if Graeme's GT is now going to be on the stand and Mat's car!
www.classichub.wordpress.com
Top

Dollywobbler wrote:Paul - can I suggest pulling some of the info out into bullet points? You really need to cater for the 'quick glance' brigade. Stuff like power, economy, length of ownership, then the detailed stuff below that for those who like to linger and read it all.

We did have an idea at one stage to make super-size milometers to go on the roof of each car. Apt if Graeme's GT is now going to be on the stand and Mat's car!

I agree with that. We almost need a 'brochure' style facts-type affair, to keep it short and sweet, and then put the text underneath for those who are captivated by what they're read so far

And then the text, with a more personalised flavour just as Paul's put it.
CCC BX monthly column writer bloke thingy - bx@citroencarclub.org.uk

As long as its no bigger than 1 page of A4 I dont see an issue.

I wouldnt go to far into the competitiors etc as that will be covered in the BX "did you know" Which will be on posters around the stand.

I think if we want a corporate style, we need a guru who can reel off all the facts and figures for all the cars and push the formatted documents back to owners to complete their own blurb.
BX14TE St Tropez 1990 - now sold
Xsara Forte 1.4i 2000
Kawasaki GPz550A4 1987
Top

OK - if we go with some bullet pointed specs at the top, then a piece of blurb about the particular car? Probably no more than 5 or 6 bullet points listing basic specs as I think folks are as little inclined to read long tables of figures as they are text. I'll reformat it and get back to you for a thumbs up (or down as the case may be

Right - here's the (new) deal: How about if we have a laminated card in the cars with bullet pointed specifications, than have a further double sided laminate available at the desk for interested parties to pick up and walk round with? On the reverse of the blurb could be pics of the car/ resto's/important events in its life etc. That would work?
Top
Messages: 351