Anything about BXs
Messages: 34

Cheers guys, some wise words there. Leaning towards leaving it as it is at the moment.
CCC BX monthly column writer bloke thingy - bx@citroencarclub.org.uk

Well, yesterday it was decided to leave it as after yesterdays events:

Travelled up the road to meet with a guy who does SMART repairs. I've got a couple of dings and wanted to know if they could be removed or not. Turns out the worst one can't (will have to come up with a plan for that as it's right on show!)

Interesting thing was the painter asked me why the hell I'd respray it. I started on with the familiar "yeah, well I know they're not everyone's cuppa or worth much, but I like it etc...." before he said "No, I meant it's really cool. If you respray it you'll ruin it! You'll take away the history and life of the car." He went on to say how bored he gets of seeing old cars all (obviously) resprayed and over-polished. His opinion was just to give it a good clean, no streaks or marks and show it as an honest 120k example.

I had to kill 50mins after meeting up with him, so I went for a blat in the countryside instead. I got to a small cross-roads and turned 20 all over again......built the revs up, dropped the clutch and cained the arse off of it up to about a ton. Slowed down when the road got narrow and went to turn around in a gap that wasn't actually big enough to turn around in! Managed it awkwardly and parked under some trees. Just as I was about to come to a standstill, I notice the cop car heading towards me and slowing down. "Brilliant" I thought, as I assumed they'd seen my racing launch just previously. I got out as he stopped by. Expecting him to get out and put his hat on, I was surprised when he lowered his window and asked if I was ok, or if the car had broken down! Surprised I said "Yeah I'm fine thanks! Don't laugh but I actually stopped to take a picture of it!" He asked why and I explained I wanted to see how it looked in a picture in it's current condition as I was thinking he respraying it. He asked which colour, I said "no, just the same again." He asked if I was selling it or something. I said "No, I've had it since 2004 and don't intend on selling it." His response? "Why the hell are you going to respray it then? I'd leave it as it is - you don't clean and paint antiques do you?!" I couldn't believe it - a bodyshop technician and a copper both told me to leave it with battlescars and patina, so that's what I'm doing!

Funniest bit might have been when the other copper in the passenger seat said (I quote) "ah yeah, my mate used to have one of those! Went like fuck!"

So true, I did actually take the picture.. 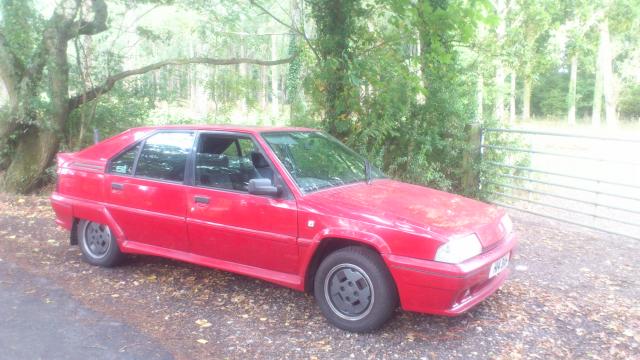 The chances of having a re-spray that doesn't look like a re-spray is as good as impossible. The chances of it not being perfect are high.Having worked in a place with two paint shops (one okay, one excellent) I have seen too many f-ups to ever chance it. You need to pay top whack, find the best sprayer, and even then hope for the best.
Bride of Stinkwheel
http://weaselsemark.carbonmade.com

Funny thing with the rozzers. They might well have spotted you. However as you had stopped and were not doing more than having a moment off the beaten track they chose to be mellow about it, as they had no firm case. I have had this happen and others to. Occasionally you get a parting shot like 'Keep driving safely, Sir' to let you know they know you were being naughty. Its prevention, as where were the little sods hiding. The assumption is a reasonable driver will think twice before doing the same thing again. Its proper policing in my book.
With the more unusual cars you get used to being pulled, though less so today, as they are spread thinner. Its so they can have a look at the car and break up their day, which can be pretty tedious, I would think. Normally no papers are asked for, though now they have a computer to tell them that pretty much. A lot of Police are into cars and bikes.
Miguel - 16 TRS Auto S, light blue, 43k miles - £450
Pluto - 14 E S, White, 105k Miles - in work
Egbert - 19 16v Gti, White, A/C & Leather, - Keeper
Walt - 17 TZD Turbo S, graphite, 70k miles, good op extras - Keeper
Scraper- 17 TZD Turbo E, blue, 208k miles - parts
Homer - 19 TXD E, Red, 189k miles - £250
Gary - 17 TZD Turbo E, 118k miles - in work

Driving the St Tropez the other day I was let into traffic (moving, and completely unnecessarily) by the po po while they had a good look and point at the BX.

Either I'm one hot POA or my BX is

FWIW, leave it as is and polish it up. I didn't have much choice about getting the St Tropez's arse resprayed, but the great thing about white is it's easier to match than other colours 'cos there's less mismatch due to fading. The rest of the car's paintwork is original as evidenced by some tell-tale dings and dents, and I'm in no rush to make it look like it's straight off the production line. The machine polish that Rob did brought it up nice and shiny, and that's good enough for me.
BX14TE St Tropez 1990 - now sold
Xsara Forte 1.4i 2000
Kawasaki GPz550A4 1987
Top

Charlotte wrote:Driving the St Tropez the other day I was let into traffic (moving, and completely unnecessarily) by the po po while they had a good look and point at the BX.

Either I'm one hot POA or my BX is

Hmmmm i shouldnt really comment, but you know which one my moneys on

Keep as is. The only time I'd consider a respray would be if I had an otherwise lovely, perfect old motor which was suffering from terminal lacquer peel and patchy fading.
• 1992 Citroen BX TZD Turbo Hurricane
• 2006 Xsara Picasso 1.6 16v
Top

It's staying as it is

Except with air con

You going to fit it before the NEC? Spoiling my claim to be the only one there with AC

mat_fenwick wrote:You going to fit it before the NEC? Spoiling my claim to be the only one there with AC

Trust me, you'll be the only one there with working air-con

Kitch wrote:It's staying as it is

Kitch wrote:It's staying as it is