BXs fallen to the Scrappage Scheme

Anything about BXs
Messages: 23

BXs fallen to the Scrappage Scheme

In 2009 the Government launched its 'Scrappage Scheme' under which owners of vehicles could trade there old car with a Government backed £1000 towards a new car. While my BX Survived the scrappage, not all where so lucky.

This week, after a Freedom of Information request, the Government have released the details of all vehicles traded in under the Scrappage Scheme, and in places it makes for eye watering reading.

While the data entry is rather clumsy, after a bit of cleaning the summary for all Citroen models looks like this; 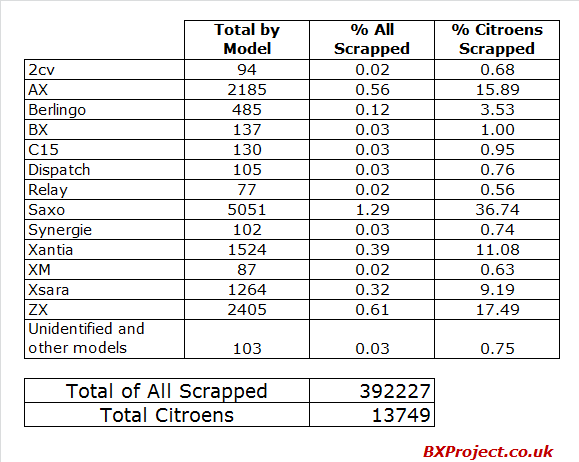 The full details can be read on the Gov.UK Website
Read more about the Scrappage Scheme in the Wikipedia entry.

I think the BXs got away with that lightly compared with the AXs, Xants and ZXs!!

That is just utterly disgusting!

But then again I think the whole scheme was disgusting. Why scrap good old cars (not just Citroens) to make way for ugly modern piles of electrical c**p?!?
1992 Citroën BX 1.9 Diesel Meteor 4x4 - The Project.

^ It's only purpose was to keep the new car industry going during hard times. No other purpose. Sad.
I have zero patience for your tedium.
Top

A few points of note;
* There where only 3 CX's that i could identify in the list, so they didn't get there own row.
* The Xsara pile includes Xsara Picasso's

Interesting that the scheme was only meant to remove 300,000 cars from the road but took closer to 400,000. It does seem that the smaller hatches, and what i consider learner fodder, took the biggest brunt. AX, Saxo, Fiesta, Corsa all took a pretty big hit.

It's scary the number of 'exotics' that got weighed in, i can only hope that they where barely MOTable

Total Citroens / total scrapped is 3.5 %. I thought Citroen's market share normally hovered around 2 % - hopefully someone will be along to correct me there. If so - not sure what that means - could mean people kept their Citroens longer so more were ready fodder for the scheme, or it could mean that some were more ready to swap for something else.

The last I heard - apart from all the other emmissions and industrial waste involved, making a new car uses some 50,000 litres of fresh, drinkable, water. So which is more environmentally friendly - keeping and old car on the road with its higher emissions, or the environmental downsides of the manufacturing process to make a new one ?
1992 BX19 TGD estate 228K Rusty - SORNed
2002 C5 HDi SX estate
Top

Thanks for digging that table out Vanny, makes interesting reading.

Probably a waste of at least 100 decentish BX, the others (BX) mostly too far gone. Not forgetting they may well be still going in Eastern Europe as despite official spiel, a hell of a lot of cars were exported there and sold. I ran into a lorry driver who said he regulalry took them at the time. Scrappage? well they got more than scrap value and transport cost and then avoided the nasty substance reclamation costs - what me cynical!

My old one escaped as although eligible when the 'accident' happened, the MOT ran out three days or so later so not eligible. You now see how well set up it was, if you had a scrapper you could not scrap it under the scheme.....

The above comments makes you realise why. I certainly saw a lot of 10-11 year old cars in decent condition on transporters then....

Actually the Green party are one of the few to get the maths/environmental calculation correct. Keeping an already manufactured (and reasonably efficient) vehicle going is way more 'friendly' than all the energy not to mention the extra 250Kg of materials in its' replacement. I believe the Morris Minor claims to be the greenest of all cars in the UK.....

That is a surprisingly few BX.

The new car market has become largely a product of available credit, like many other. I read with some attention that the new private lease buying is getting around the need for taking out the more traditional loan/hp agreements, with its checks and legal requirements. In effect the new ways of buying are much the same as the bad mortgages were to those made under more conservative management before the banks crashed. So many new car sales are very much based on the interest rates, and the manufacturers ability top sell off unwanted second hand cars. Its clear to see this could trip up and fall over for several simple market forces. It could mean a temporary glut of cheap second hand cars.

The fact is like so many economic indicators the market is so manipulated you cannot really see what is going on. Scrappage being the start of various methods of Automotive Quantitative Easing. Those of us investing in 'bangers' really do not fit the system. However we tend to own more of our car and its maintenance, taking us outside this illusory land, where spending more money you have not got, is called 'saving'. The Manufacturers therefore have an interest in selling off what old spares they can, and then dumping the old models, to force us into buying newer cars ever more dependent on them to work. In other words the Manufacturer is gaining more control of you budget to use the car. I can see folk on this forum falling into the trap.

If you want to live an independent life and avoid sugar coated pills of control and expense you need to look at these things. Followed to its natural conclusion it ends in a place I do not want to live.

In Spain you can get up to 5000€ for your old car. Its only the people with money that can afford new cars so its not a plan to help the poor. My company car a 10 year old fiat multipla has just been used for the scrapage scheme. The fault this car had was a slipping clutch! I find it incredible that a perfectly good car gets scrapped. My new company car is a fiat 500L, load of shite
Benifotrem1

Mat_the_cat made an interesting suggestion that it would be interesting to see how Scrappage influenced the declining number of BX's (that's not quite how he put it, but i think that's what he meant) 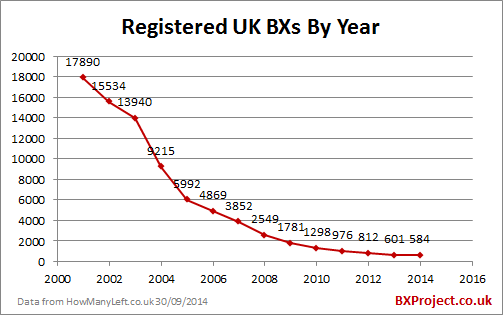 But actually year on year, it seems the Scrappage Scheme didn't make any difference to the rate of decline in taxed UK BX's

And when you consider 97% of the cars taxed in 2013 have already been taxed in 2014, I wonder if the total BX ownership has leveled of?

Only 584, blimey, no wonder i never see any bx's on the roads these day's

My god, they are getting rare!! I thought there were a lot more. They are all worth saving, better save some more!!

At some point soon the BX count should go up to 585. A while ago Kitch mentioned a BX Estate in Jersey - "free to a good home". It’s now on my drive and time will tell whether it is a good home. As for “free” - apart from the cost of getting it off the island, it now owes me 5 spheres and £230 for welding up 10 holes. I’ve stopped looking for more holes so next will come steering rack gaiters and CV joint boots, drive shaft seals, 2 washer pumps and some paint - and maybe some hydraulic pipes and an o-ring for the brake valve. Then all it will need is an MOT a pair of number plates and a decent radio. This is my first post here - I see I am allowed 60000 characters but this is enough.
Top