Tell us about BXs you have spotted on the road, or BXs/parts spotted for sale including eBay finds.
Messages: 7 • Page 1 of 1

Been meaning to post some of my spots ever since we got back from France in June... In terms of BXs they seemed to become increasingly more common the further south we got in France, in part perhaps due to the warmer climate? Those I looked at in scrapyards seemed to be pretty rust free.

In terms of other Citroens I only saw one DS and one CX (ex-ambulance) on the road, and I think a couple of Visas. Parked up an SM in Vichy and elsewhere a single GSA and what looked liked two very well looked after LNAs in a very large garage. Plenty of A-series and Renault 4s. On our ferry home from Dieppe we were behind a concours condition, Portuguese registered Renault 4 on a very long trip to the UK making an even longer trip than the Challenge.

We saw a pre WW1 Renault on the road near Sarlat. Other surprises were a Renault 14 in Quillan, a real wreck of a Renault 20 and perhaps rarest of them all an FSO pick up being used as intended in Limoux.

What I didn't see were any H-vans which have probably all been turned into UK pizza parlours...

There is, of all things a 4x4 Sisley knocking about these parts

I've been meaning to post this up since June... This Renault Dauphine Ondine (1962ish) parked up in the village after I left the Challenge for some R&R. I've not seen this before; it was outside the neighbour's house who has a beaten up Megane Coupe mouldering quietly in front of the chicken coup, so I guess it's not his, otherwise it would be dust by now. Anyway, you don't see many of these, so I took the picture for posterity! 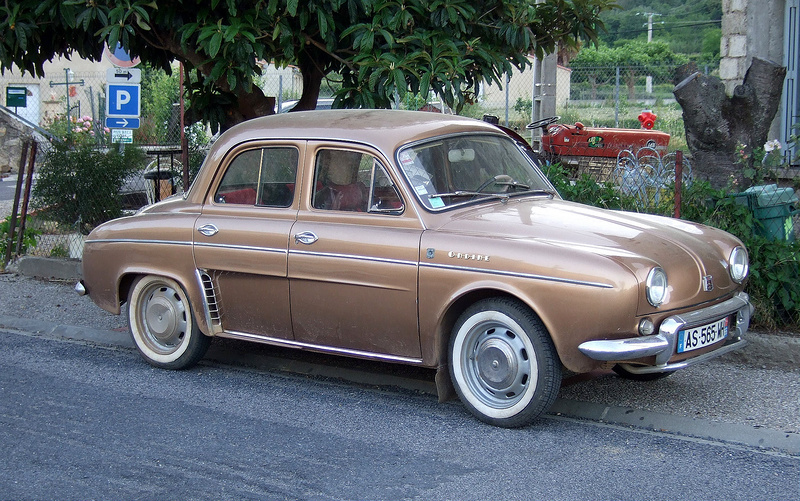 I remember those back in the day. They had a reputation for catching fire as the petrol filler was in the engine bay over the hot exhaust.