Route plan update.... Just to remind you all the existing plan is subject to change. Not a big change but there will be one tweak to the plan... watch this space.
• 1992 Citroen BX TZD Turbo Hurricane
• 2006 Xsara Picasso 1.6 16v
Top 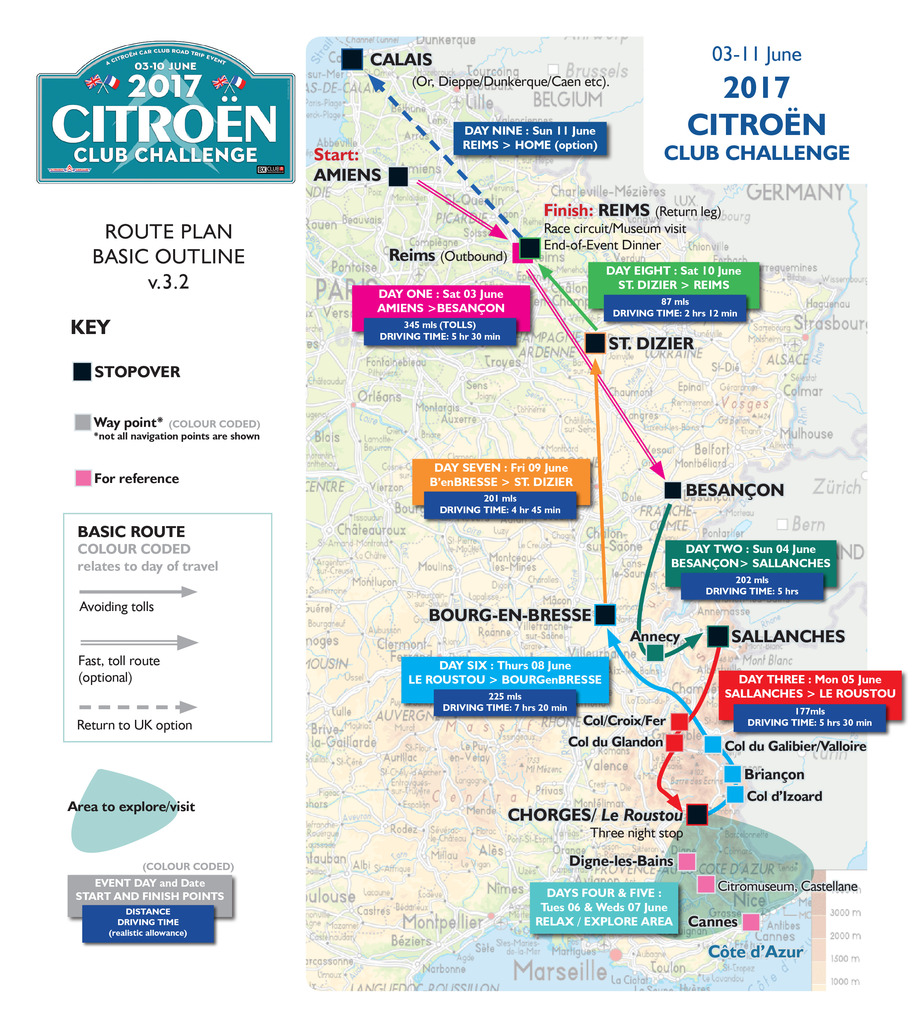 I have decided to pull back from seeking to make the Citroen Challenge a Club sponsored event (I want to keep it as a separate, autonomous entity) I will be removing it from the Events on the Club Facebook group page. I have asked that the board of the Club be informed and that it is nothing they’ve done to upset me! I’ve just ‘had a think’ that’s all.


PS
Want to know my thinking behind this? (A bit of a read, so grab a brew or beer…)

Background.
When I announced an event for 2017, partly due to the reputation these trips had earned and due to the growing influence of social media in spreading the word, there was a significant rise in the number of interested parties. As it stands I have 37 names on the list (and some co-pilots/partners to add to that too) which - at a rough guess would translate as 30 cars. Compared with the 10 or so of past events this clearly has the potential to become a significantly more cumbersome affair requiring a lot more day-to-day planning, co-ordination and liaison. Not least when considering overnight stops.

Because of drop-outs we might settle for a total of 27+ cars/44 people (bearing in mind I haven’t really started promoting the event outside of Facebook). I concluded that I would need to secure some financial support from sponsorship to offset the expanding workload as well as raising the profile of the event (with a view to a super-Challenge in 2019 - The Centenary Challenge). e.g. I always felt we needed to get these trips properly recorded and with so many cars it seemed an opportunity to consider having it professionally filmed. Which costs…

Who else better than Citroen UK or the Citroen Car Club to sponsor the event? The overwhelming message I get from the Club is don’t approach Citroen UK directly - it has to be through the Club - and specifically through a single representative (Chairman). However, I got the feeling that I would be flogging a dead horse anyway as Citroen wouldn’t do anything… but I still might be able to squeeze some t-shirts and stuff out of them...

So that left me to think, for convenience’s sake if nothing else, it might as well become a Citroen Car Club Event. And I would then have to work hard to extract sufficient sponsorship funds to make a difference and elevate the event to a ‘professional’ level.

Then the spectre of Club membership came up. If the CCC was to sponsor the event to the tune of a few grand, then surely it should be open to members only. This troubled me but I thought I’d come up with a solution. Each participant would pay an entrance fee - X to members and X+Y to non-members. But included in the non-member’s fee would be a year’s membership of the CCC. Seemed a neat solution.The fee would cover a small portion of my time in administering the event and getting some stickers printed up.

But then I took stock and realised the character of the event would be completely changed. I could see the distribution of forms and liability insurance and CCC protocol etc. and all of a sudden the somewhat relaxed spark of past road trips would likely disappear. I would become a full-time organiser so would pretty much be excluded from having the chance to relax and enjoy the event myself as much as anything! And I would become quickly embroiled, less in route planning (that’s largely sorted) but more with liaising with campsites and hotels, restaurants and so on.

However, managing a gathering of 30 cars/44 people would be challenging for sure, but it could actually be a rewarding exercise if I could share the tasks with a small team which was financially supported by an enthusiastic sponsor. But is this where I want it to go? I have reached the conclusion that it isn’t.

Therefore, I have decided that I will not ask the Citroen Car Club to sponsor the event (or subsequent ‘Challenges’). This isn’t because I don’t think the Club is a worthy sponsor, it comes down to the spirit of these events and how they were initially formed. It has always been an enthusiast-led, informal road trip with the minimum of official terms and conditions etc. And, generally it has worked well like this.

I need to preserve the character - the spirit if you like - of the ‘Challenge’ that has been built up over the past 7 years. The friendships and bonds that have been formed are priceless; the community that’s evolved is separate from the CCC - and the BX Club too where it all started.

I am faced with a bit of a conundrum…. I want to run this myself rather than form an organising committee and so on. However the potential scale of the 2017 Challenge will be hard work and I might feel in need of some help now and then - in the accommodation organisation, liaisons with museums/places of interest etc. as well as on the event itself.

So what to do?
First. Limit spaces available. This allows me to manage the scale of the event and tailor it appropriately. I have a bit of a problem in that I have realistically about 24 cars and 32 people on the list - (not counting some first-timer possibles included earlier on). I’m not quite sure what to do. My thoughts are to set it at 24 cars max. Over 60% of those registering interest have been on one or more of these events before - that’s going to make it more manageable. If I end up not being able to fill all 24 slots, that’s fine because I won’t be answerable to a sponsor or Club board. It will be down to those who take part to decide if it’s a success or not, not a balance sheet.

Secondly, I need to charge a fee that doesn’t discriminate against the solo drivers, doesn’t discourage veterans of previous events yet encourages commitment. So It’ll become a per head entry fee as opposed to per car as in previous events. The fee needs to cover a minor proportion of the admin, a sticker pack and polo shirt (which went down well last time). I will finalise costs and let everyone know asap.

Being a limited space event, it’ll be organised on a first come, first serve basis. A deposit, per head will be required to secure a space. Balance payable closer to the event date. Those on this event mailing list will receive their chance to enrol before anyone else - I’ll send out a message in due course. The event will not be advertised in the Citroenian, and it will be removed from the CCC FB page events section. The dedicated Citroen Challenge page will become the main conduit of information in addition to mailings.

What does this mean for the Club and future Challenges? Obviously the Club will be free to initiate their own events to celebrate 100yrs of Citroen, but there will be a 2019 Challenge arranged by me, carefully designed to be appropriate for the centenary but non-affiliated. It’ll still be aimed at enthusiast road-trippers and places will be offered to veterans of previous Challenges initially.


So that’s it for now. Make sure you visit https://www.facebook.com/CitroenClassic regularly

Im still up for it!
Lots of Motors, mostly semi broken....
Top

I'll be announcing the registration soon

Sensible move Phil.
The Joy of BX with just one Citroën BX to my name now. Will I sing Bye Bye to my GTI or will it be Till death us do part.
Top

I'm still a possible. Just dependant on being my Dad's carer.
Mark Smith

Regarding the 2017 Citroen Challenge, (which as you may or may not know has a limit of 24 cars/teams), I will be sending registration forms and expanded route summary out to those on the mailing list first, and accepting completed entry forms and deposit from 10:00 am Sunday 26th June 2016 onwards. If you aren't currently on the mailing list and want to be put on, please PM me. If the event is significantly oversubscribed I will try to organise a second run of the route.
https://www.facebook.com/CitroenClassic
• 1992 Citroen BX TZD Turbo Hurricane
• 2006 Xsara Picasso 1.6 16v
Top

I hope you have me and the GT down!
Lots of Motors, mostly semi broken....
Top

Less than twelve months to go!!

Just need to get the GT up to snuff now but its nearly there.
Lots of Motors, mostly semi broken....
Top
Messages: 79