Tell us about life with your BX, or indeed life in general!
Messages: 147

ahh right a umm.. heater matrix tap! thanks, ill look around for one! maybe one from a 405 may fit.. theres one in my local scrap yard with the XUD in.
ill also check ebay too.

hmm people want crack smoker money for them! i think i will just repair my old one! damn!
- JohnDragonMan

The tap is the same in all engine variants in BX. They tend to leak sometimes from the shaft too. The O-ring is replaceable but need some surgical skills. Haven't done it myself tough.
BX 4x4 estate, several BX Van's and some more normal estates in Finland.
Top

a week or so ago i jetwashed the car and engine bay, so much oil.. looks a lot better now. the steering rack gators have come through along with the brake pads for the front and rear, all new engine mounts and a few other bits. i still need to get new brake discs for the front and rear and maybe while i am at it, any other things for the brakes. flexi hoses would be nice but i cant find any for the ABS type BX.

i have take the LHM tank off today, poured out the old creamy green LHM.. found that it has a plastic disc in the bottom of the tank that kinda acts as a water trap i guess. what ever.. its was pretty rancid under it. the filters were caked. i have put most of the stuff in the dish washer.. old dish washer that is.. they make awesome parts washers. the tank has come out gleaming along with the top.. i did not put the filters in it with them being a thin plastic mesh so i will have to go cleaning them manually.

now here is one i bet a few of you have not spotted.. the cap that has LHM stamped on it with the small pipe that goes into the top.. have you seen how much crap collects in that??! i have been cleaning it out for ages now and it just keeps coming! i think i am going to get a car window washer pump and some diesel and just keep pumping that though it. its really bad!

still not got an engine yet.. >_< its having the time to actually arrange it all!

oh and i noticed that the rear wheels on my BX look like this / \ from the back. is that because its not up on the suspension or is it a bush issue?
- JohnDragonMan

Try cleaning the filters and the cap with paraffin, I'm told it works wonders and doesn't eat away like diesel can.
Top

I use petrol to clean the lhm filters & the tank, makes them sparkle

Rear wheels thus/\ usually means the bearings are shot in the arms, they should still sit straight even in low position, common prob easily solved with a bearing kit each side cost about £30 per arm. Each kit comes with 2 taper bearings, seals, plastic tube, long bolt and nyloc nut. Readily available same as C15, Xantia tho the long bolt may vary in length-you can re-use the old bolt.

The pipe on the LHM cap is only a breather which disappears into the wing shouldn't be full of anything as it really serves no purpose the reservoir breathes quite well without it.

i am not sure if i have a cracked fuel tank or if a pipe has burst/failed.. i keep filling the tank with diesel hear and there (what i get out of scraped cars) i managed to get a full 25L's can worth of diesel only to put it in the tank, and it all leak out. i know the tank has been fine filled to about half way (fuel that i added to it over the time its been stood at work)

i know theres a diesel pipe that goes to the bottom of the engine as i did get some leak out of that, but i blocked it off with a bolt.

sadly i wont know how bad the fuel tank is for some time as i dont think i will ever get the car in a position where i can get fully under it to drop the tank. not till i can get it on the road and actually drive it around.

on the good side though, i managed to buy some new parts real cheap.. i got a complete new dryer for the AC system for a grand total of £2.97, one brand new caliper for £8.17 and the other side for £24.26. also got a ABS wheel bearing kit for the rear for £7.05 (dont think i need it but for the price...) and bought a heater matrix for £4.58... again dont think ill need it but its nice to have the spares!

i have also bought new brake hoses for the front.. just hope they will fit. they are called ABS hoses.. and the thread is M9 if not oh well i can sell them on here.
- JohnDragonMan

Engine acquired. just got to wait for the guys to pull it out of the other vehicle, then it can be dumped in the back of my scrappy panda and taken to work. i think they are giving me the gearbox too.. not that i want it as i will use the original BX box.

now to buy the cam belt, water pump and other bits! (i already have a few!)
oh and if anyone has a BX cam shaft, let me know! i will put a wanted thread up.
- JohnDragonMan 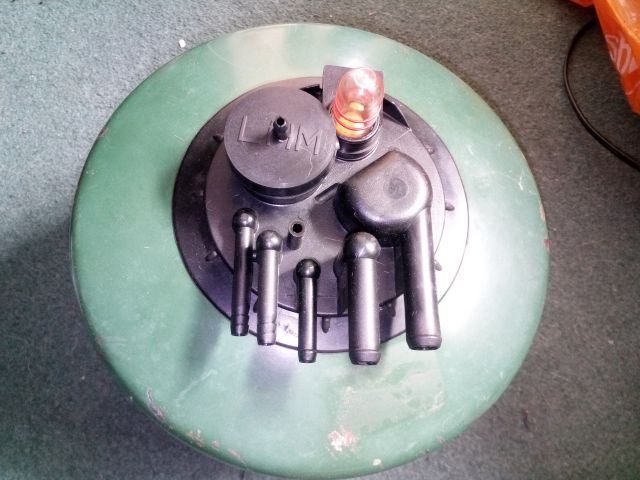 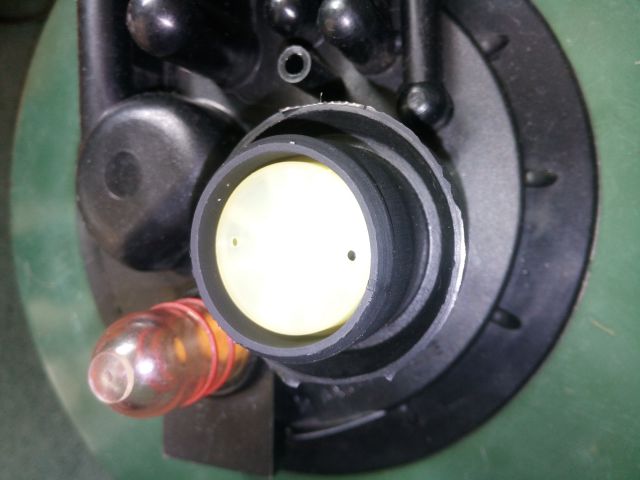 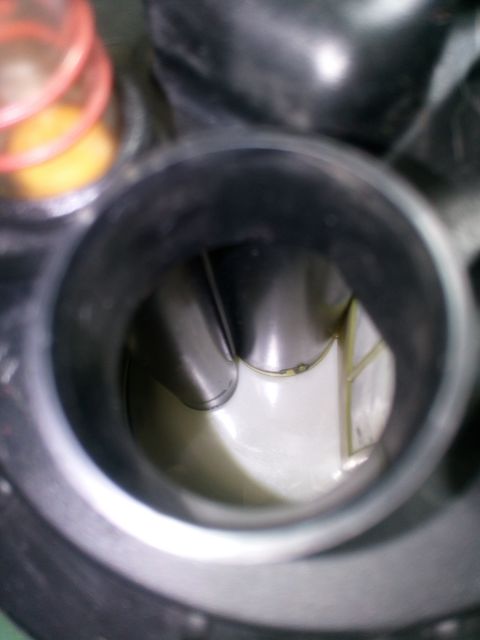 i tell you, the edge on the lip of that tank is sharp enough to split the molecular structure of oil! impressively, i managed to clean it unscathed and i have quite big hands!

i wonder if i will get a chance to do anything on the car tomorrow on my lunch break.. it would be nice to get some of these new parts fitted.

so far i have managed to get hold of:

all engine mounts
Sachs clutch kit (pressure plate, friction plate and thrust bearing)
inner cv boots (turned out to be cheap multi fit ones not as pictured so im reluctant to fit them to the car)
ball joint dust covers (enough to redo all of the ones on the car)
Power Steering Rack Boot Gaiters (both sides)
brake pads and discs for front and rear
brand new front calipers (both sides, got them really cheap! £8 for one, £24 for the other)
aircon dryer (lol original one looked 26 years old! i managed to get a brand new replacement for £2.49!)
rear wheel bearing kit (don't think i need it but it was damn cheap at £7!)
CV boot (genuine) (only one, need another.. or 3)
sump gasket
cam/rocker cover gasket
front brake hoses (ABS.. hope that means they will fit!)
heater matrix (didnt need it but brand new at £4 i could not say no!)
Gates cam belt kit (Cam belt, tensioner, idler pulley, and water pump)

i'm not really fussed about how much this is costing me.. i am pretty sure i am going to really.. really enjoy this car when it is complete, and the way i see it; the more i replace the less will fail! i am tempted to replace all of the rubber return lines too but i was considering replacing them with the push fit PVC type pipe used in pneumatics and other things. i am currently using it on my panda as to and from the tank fuel lines and it works a treat! also makes it easy to get some fuel out if i need to fill the lawn mower up haha. oh and as a bit of a bonus, they are rated at 16 bar too so theres not much chance of a leaky strut blowing the pipe off.


ill try and get some pictures up.. maybe a video too. ill see if i can get into work a bit more early to do so.

if anyone can recommend me a good place to get some solid pipe (all 3 sizes) and maybe a pipe flaring tool, please let me know.
- JohnDragonMan

update time!
the replacement engine is nice, it runs great and for saying the EGR was jammed open and the waste gate on the turbo was seized solid it does not smoke! (always on boost, but all the pressure was leaking through the EGR to the exhaust.. sigh.)
yes.. the EGR.. we will get to that in a moment.

so here is my little work place.. 2 engines.. a good tool set and in the background there.. on hell of a lathe (13 inch deck! sadly missing its chuck) 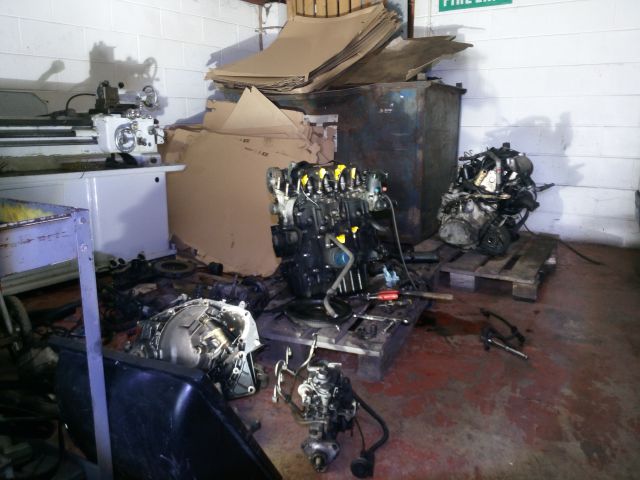 here is the engine. so far i have stripped off all the bits bolted to the sides, taken the belts and pulleys off. it needs vigorous cleaning. i will jetwash it for now and see how that makes it come up. the plan is to paint this Red with engine enamel. (red for a diesel, green for a petrol.. its just how it has to be) 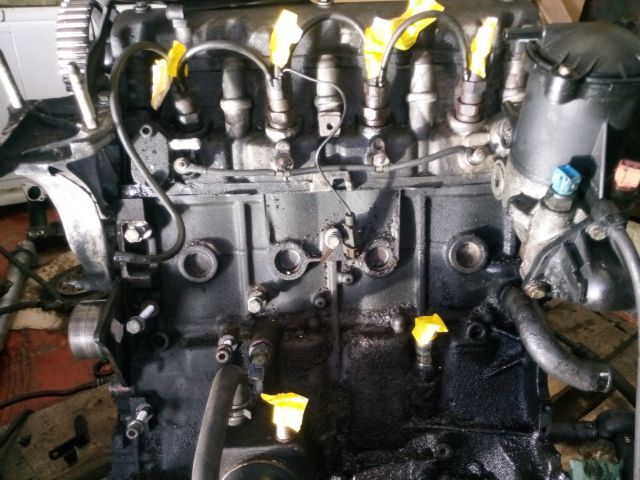 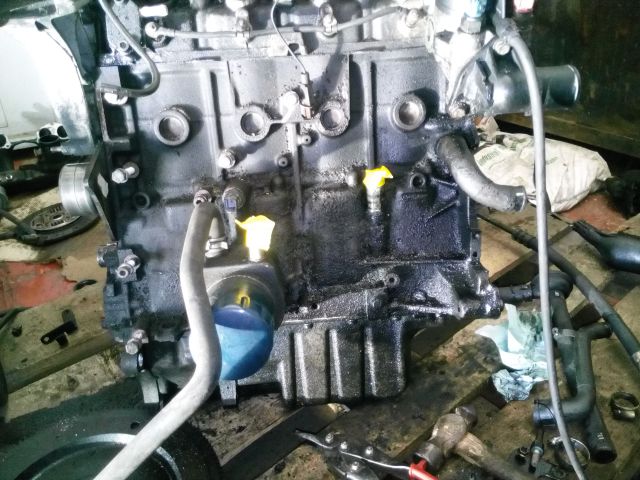 guess which ones are the intake... 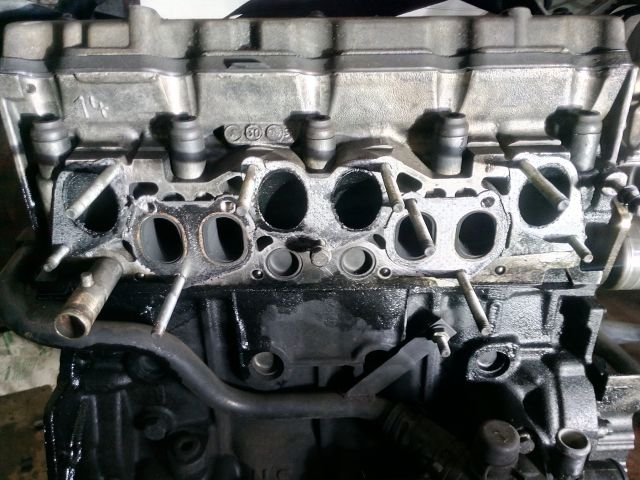 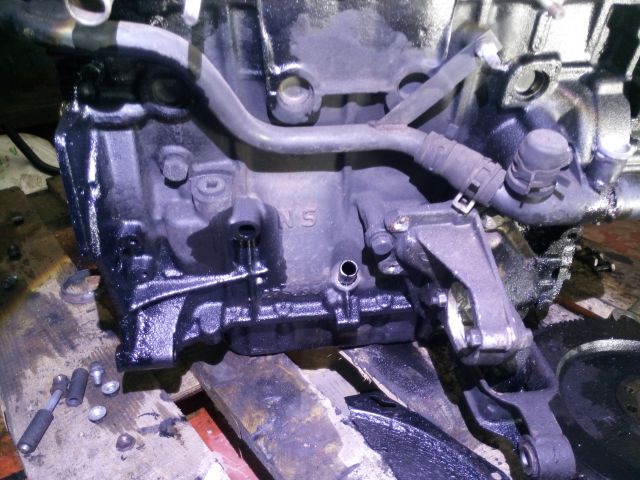 pesky oil seal behind the flywheel was leaking... gahh. well may as well change it as i have it all to bits to paint it 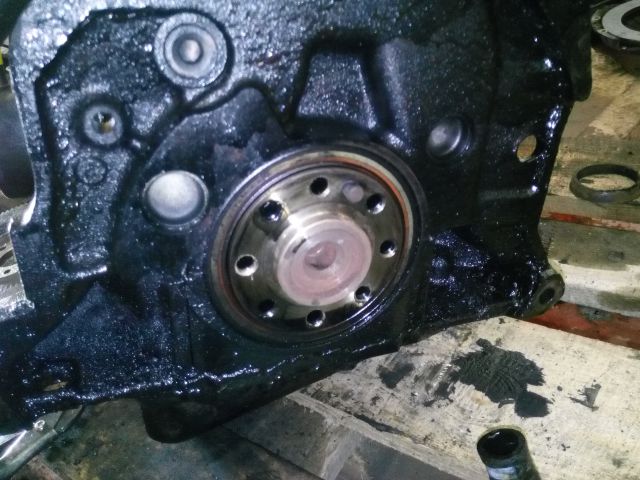 the other end (timing belt end) is ok.. but for what it takes, i will change that too. 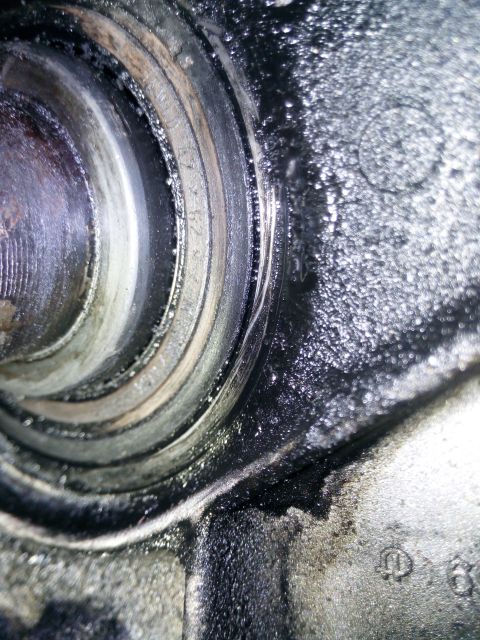 oh whats this.. it all came on the replacement engine.. could it be? the magical Bosch pump everyone raves about?? oh my.. so it is! 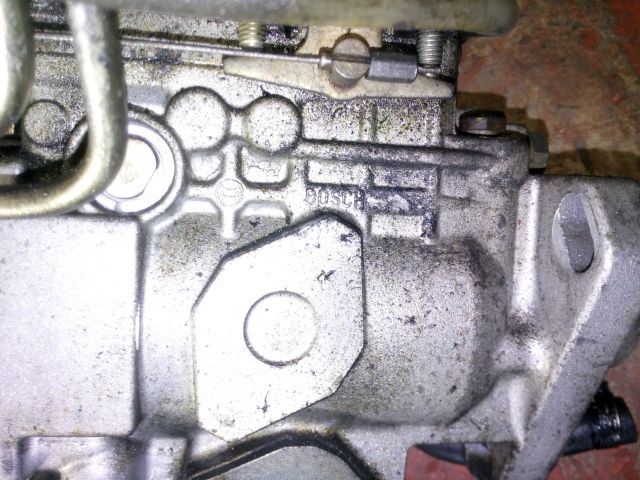 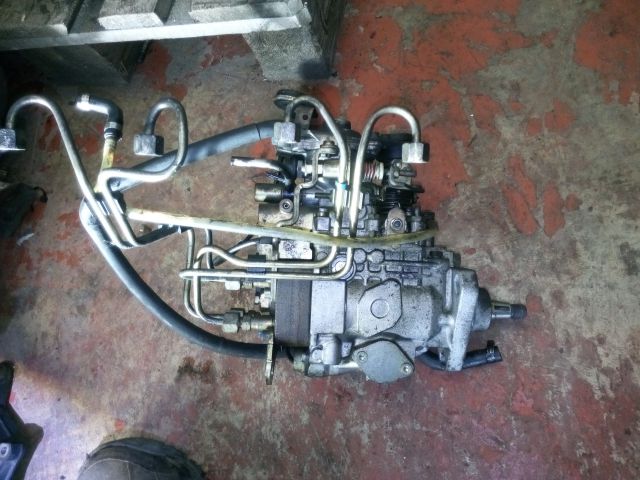 right.. so now we get back to that EGR thing i was on about earlier.

here we have the 2 center exhaust ports. nice and clean. these are as i took the manifold off. i have not cleaned these. 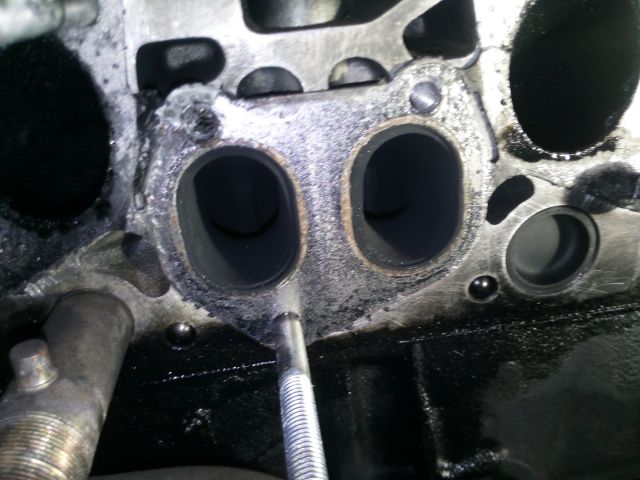 now for the true horror of the EGR.

these are the clean air intake ports. 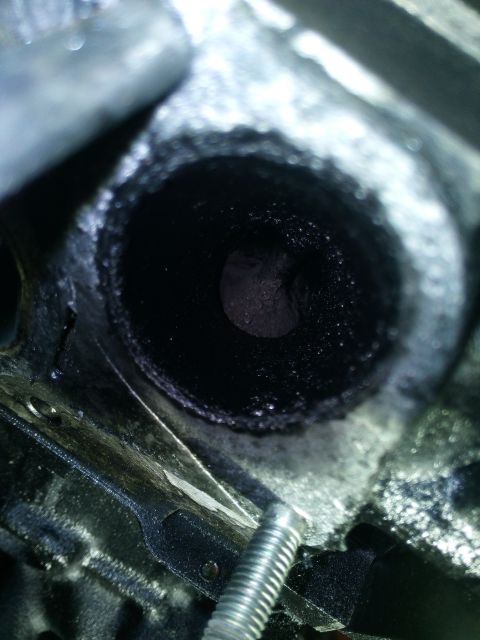 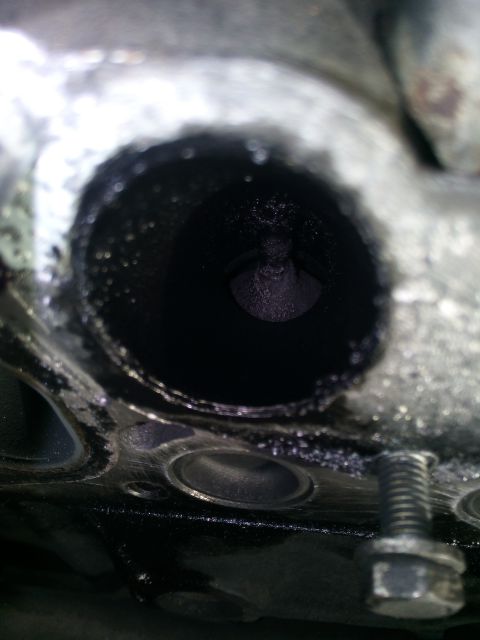 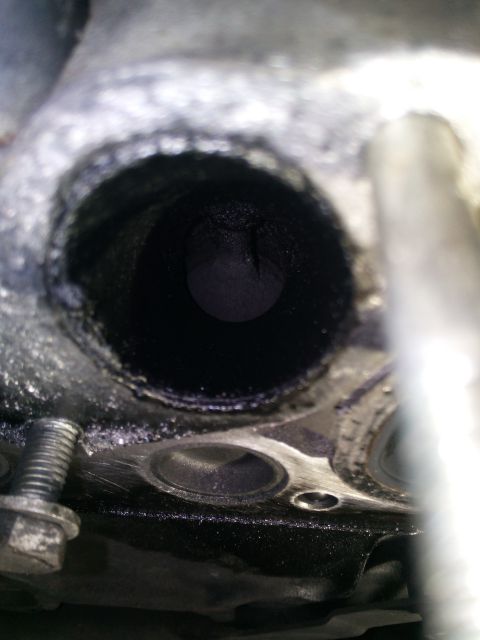 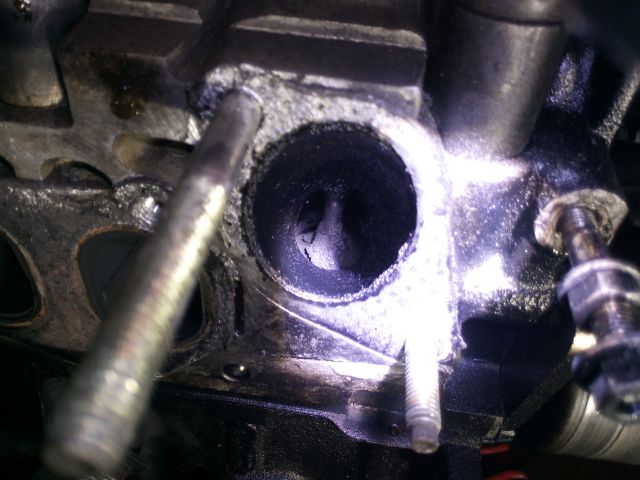 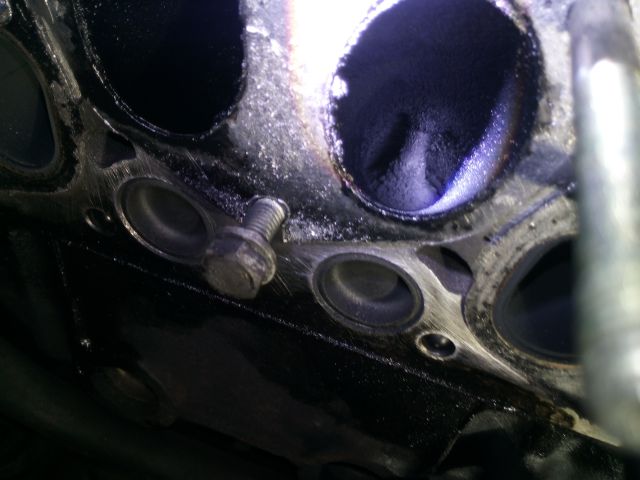 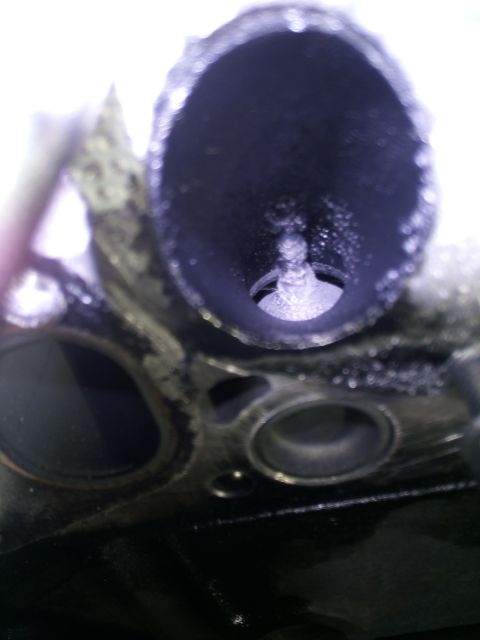 sadly torch batteries died at cyl4.. but it was just as bad.

ERG.. the creator of "diesel engine cholesterol"
i give you, the grand finally.
this is looking into the intake manifold, at the EGR/clean intake air from turbo mixing point. behold. strangulation at its finest. 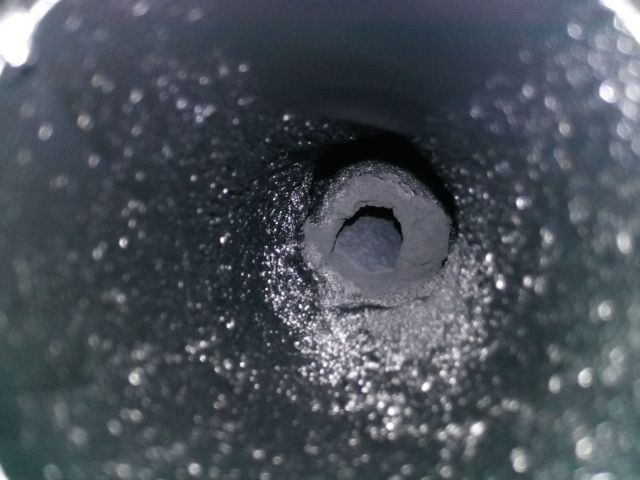 even just me blowing through the intake manifold, i was greeted with quite a resistance. its no wonder the waste gate on the turbo was jammed closed! poor thing had to boost all the time to combat this incredible restriction.

needless to say, the manifolds and turbo (if i cant get my hands on a VNT turbo before i get the thing built up) from off the old engine will be going on this replacement engine. the old engine was before the days of EGR's on diesels so the intake manifold and ports are still shiny! even the turbo does not pass oil!

well, till the next update keep rocking!

and dont let those EGR pictures give you nightmares!
- JohnDragonMan

a lateish rover 200. i just have to hope that the immobiliser is not built into the fuel pump. theres a lot of wires going to it :/ 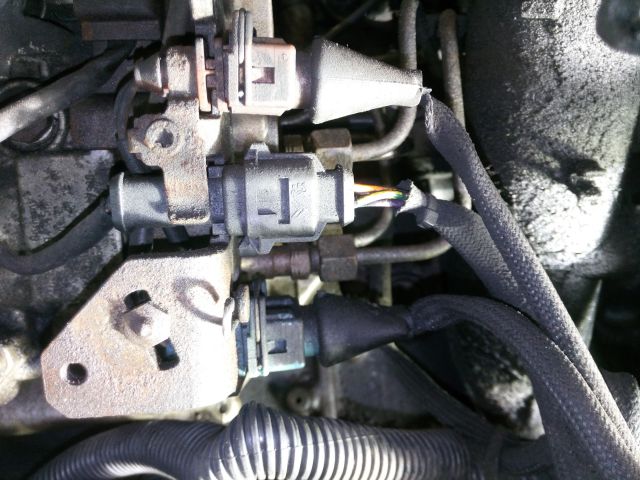