A BX weekend adventure - and rehabilitation of a style icon

Anything about BXs
Messages: 38

docchevron1472 wrote:T definetly stands for tres and D is indeed diesel. When I visit my mate in hospital later I'll ask what the R means. He knows.
The TZD was tres zenith diesel, ie, it was the best specced diesel you could buy in britain.
Have no idea what the X was for in TXD. Perhaps tres xenaphobic diesel???

R = Riche.
TR will approximate to other marques GL. Whereas GL stands for Grand Luxe (Great Luxury) and TR stands for Tres Riche (Very Rich), both refer to the level of fitments and supposedly go to a lower level on models without the prefix G or T. Direct comparisons for level of fit though can only be made for the same model year as manufacturers will also upgrade the fit level of lower badges as the model gets longer in the tooth.
1991 BX19GTi Auto
Top

Good man. Knew it was something like that.
Cheers
Chris G
Smokes lots, because enough's enough already!

Update (8 days later) - After 24 hours, this is what a well t-cut red BX looks like next to its long-lost-cousin. T-cut by Sheppard, colour by Jamcam and Irfanview - colours not a true relection of the world but intended to show the degree of shine possible ......

toytown view (well, I did use a Jamcam) 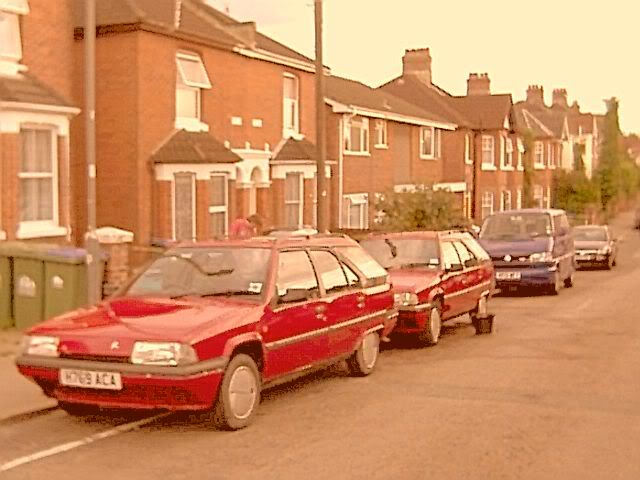 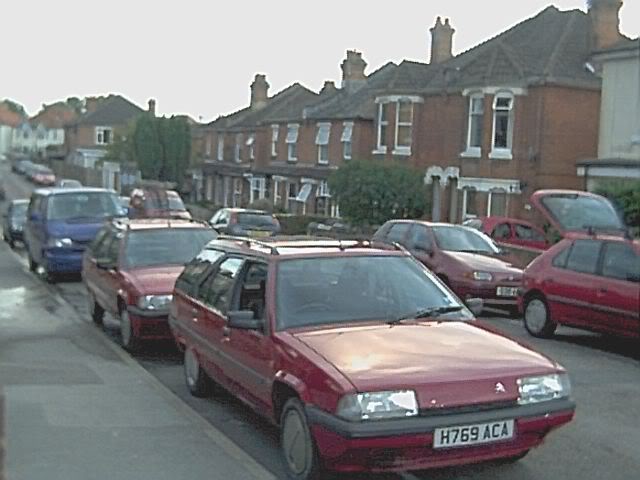 This reflects state of play 8 days ago. Since then, Clarence went for MOT:
failed.

Front discs (brake performance within legal requirement, pitting due to frequent application of Welsh mud not so legal). Now cured with a disc and pad transplant.

Excessive corrosion of O/s rear brake pipe (again due to frequent application of Welsh mud). Saturday MOT caused phone-dash around cit-parts outlets in search of replacement pipe. Solved when I reached the last box of BX spares, and with Tom's assistance.

N/s Headlight alignment - must have been looking the other way..

Corrosion to rear of both sills

This didn't look too bad when first examined - didn't apply poking instrument with enough vigour though, (unlike Mr White-stick). In for welding.

More news more or less as it happens (ok - perhaps a few days after the event). Oh, and a snapped speedo cable replaced (along with other minor fixes).
Occasionally constrained by geography. When not driving, can rely on ferry, two wheels and musclepower when a couple of miles as the crow flies would become a round-road-trip ten times the distance.
Top

I've received news that Clarence now has an MOT, so the work has been worthwhile. Allowing for recovery costs and MOT expenses, there is a Tizzydee estate saved and freshly ticketed for a bargain £200.
Good Work David!
Top

Excellent work and well worth the effort too. On an anorak stylee note that was registered somewhere close to here looking at the number plates.
Vauxhall apologist.
Top

Bargain I know how much of a pain flat red cars are, i spent 3 hours cutting and waxing the xantia yesterday which is the same colour as the two estates and hadnt seen a can of polish for agood few years, or a hoover for that matter!

This one took a little more than three hours! It is now ready for the second cut and polish which will help it stay in this condition and cover the bits that get missed first time around.
Top
Messages: 38